Spiranthes himalayensis   Survesw., Kumar & Mei Sun sp. nov. is similar to S. hongkongensis   , S. nivea   and S. sinensis   , but can be differentiated on the basis of its allogamous mode of reproduction from S. hongkongensis   and S. nivea   which are both autogamous. It can also be easily separated from S. nivea   by its pubescent body. Other morphological distinctions separating this new species from S. hongkongensis   , S. nivea   and allogamous S. sinensis   include: floral bract longer or of the same length as the ovary, petals with blunt apex, labellum width around hypochile is same as the width of epichile, epichile widely flabellate or semi-tunicate, column length equal to or more than 1.5 mm, clavate operculum attached to the column on the broader part by an arm-like extension emerging from the upper part of column and a well-developed rostellum separating the stigma from the pollinarium.

Terrestrial herbs with perennating rhizome. Plants c. 16-30 cm tall. Rhizome about 3mm in diameter. Stem erect, leaf clustered towards the base. Leaves 2 to 5 per plant, broadly linear or linear-lanceolate, 4.0-6.0 cm long, ca. 1.5cm wide, 3-veined with depression on upper surface and elevated lining underneath, spreading from the base of the stem. Inflorescence tall, up to 30 cm long, terete, pubescent, covered with glandular hairs, with 1-3 sterile bracts sheathing the peduncle, flowers spirally arranged, clustered towards the upper one-fourth of the peduncle with flowers opening from the base. Flowers widely open 0.22 × 0.26 cm wide, 0.43 cm long, pale white to pale butter-white, pubescent with glandular hairs. Bracts green, equal to or longer than the combined length of pedicel and ovary, ovate-lanceolate, 0.40-0.50 cm long, ca. 0.17 cm wide, acuminate, hairy on the outer surface, sheathing the base of flower, margin white. Dorsal sepal white, hairy towards the base, elongated-triangular, 0.35-0.40 cm long, ca. 0.10 cm wide, obtuse. Lateral sepals white, pubescent towards the base, obliquely elliptic, 0.37-0.40 cm long, 0.10 cm wide, obtuse. Petals white, pubescent towards the base, obliquely elliptic, ca. 0.37 cm long, ca. 0.07 cm wide towards the base, 0.09 cm wide towards apex, apex blunt. Labellum white, distinctly divided into hypochile and epichile with a constriction in the middle, hairy on the outer surface, ca. 0.50 cm long; hypochile concave, ca. 0.30 cm long, 0.33-0.34 cm wide, attached at the base of short foot below the column, saccate, sac 0.05 cm deep, with one semi-globular gland on each side (0.05 cm wide, 0.04 cm high), margin entire and raised upwards till the constriction; epichile semi-tunicate, flabellate, ca. 0.20 cm long, ca. 0.30 cm wide, margin undulate, slightly dentate with some papillose hairs on the front semi-tunicate part. Column green-white, obconical, quadrangular transversely quandrangular, 0.25 cm long, 0.05 cm at the base, 0.07 cm wide towards the apex, with a short foot at the base, 0.06 cm long, stigma at the apex on the lower side, green in colour, shiny, filled with viscid liquid, trapezoid shaped, broad towards base (0.08 cm), narrower towards apex (0.06 cm), 0.06 cm long. Rostellum well developed with two semi-transparent, clavate, rostellar arms projecting in the front above stigma, 0.06 cm long. Pollinarium yellow, ovate with a deep cleft, 0.22 cm long, 0.09 cm wide, narrower end at the apex while the lobes inside covered with operculum, with a ligulate viscidium at the narrower end, 0.1 cm long. Operculum yellow-brown coloured, partly embedded on the upper part of column, not free, convex, ca. 0.10 cm long, 0.06 cm wide. Ovary sessile or with inconspicuous pedicel, densely haired, fusiform, 0.20-0.25 cm long, 0.11-0.13 cm wide. Fruits obliquely clavate, ca. 0.30 cm long, 0.12 cm wide, densely pubescent with glandular hairs.

Marshy areas near mountain streams or on bunds of paddy fields (Fig. 2A View Figure 2 ) where water is stagnant. Plants were usually found growing on clayey soil along with grasses.

The specific name refers to the mighty Himalayan mountain range which is an important geographical feature in Asia. The samples collected for this study were not from the Himalayas. However, based on herbarium records and communication with other researchers, it is believed that this species is widespread in the lower altitudes of Himalayas. The evolutionary origin of this species and other Asian Spiranthes   are to be further elucidated.

Based on DNA analysis, the occurrence of Spiranthes himalayensis   can be confirmed in India and China. This species is likely to be present in a much wider geographic range where it has long been misidentified (see taxonomic notes). It was not possible to assess the specimens which might have been misidentified as S. sinensis   or S. spiralis   across its broad distributional range. It is emphasised that the type specimen was collected in an agricultural field and other specimens were found on roadsides along mountain slopes above 1000 m in its wide distributional range. Therefore it is speculated that this species might be of least concern for conservation. However large-scale habitat loss and fragmentation of habitats in Asia might pose a threat to this species. Since a thorough assessment has not been undertaken, the conservation status of Not Evaluated (NE) has been assigned to this species as per IUCN Red List categories and criteria (2017).

Hairy Spiranthes   have been reported very often from India, sometimes under the name of S. sinensis   ( Kumar and Manilal 1994, Misra 2004) and, at other times, under the name of S. spiralis   ( Deva and Naithani 1986, Misra 2007). Hooker (1890) also described two species of Spiranthes   , S. australis   (= S. sinensis   ) and S. autumnalis   (= S. spiralis   ) from India. As the protologue of S. sinensis   does not mention the presence or absence of hairs ( Persoon 1807), there has been no clear distinction between S. sinensis   and the new white flowered S. himalayensis   amongst the various reports. So far, a true S. spiralis   has not been found in India and the specimens treated as S. spiralis   might have been S. himalayensis   sp. nov. In this study, it was out of the scope to trace all specimens or vouchers of hairy Spiranthes   and distinguish them from S. sinensis   which could also be hairy in some natural populations.

Seidenfaden (1978) reported Spiranthes sinensis   from Thailand, illustrating a hairy plant with long and stalked glands in the hypochile. This specimen is also suspected to be the new species S. himalayensis   described here. Deva and Naithani (1986) reported S. sinensis   and S. spiralis   from northwest Himalaya, differentiating them on the basis of multiple roots; elongated, fleshy, cylindrical tubers; lanceolate leaves, present during flowering and pink flowers in the former against 2-3 roots; fleshy carrot shaped tuber; ovate leaves, absent during flowering; white or greenish-white flowers in the latter. They also illustrated S. sinensis   with hairy flowers and well developed rostellum with two rostellar arms. For S. spiralis   , they just gave an illustration of tubers, but we believe that this sample could also be the new species described here. They also mentioned that S. sinensis   was found in two colours, pink and white. This could be the source of confusion leading to the misidentification of our new species as S. sinensis   by other workers. Kumar and Manilal (1994) reported S. sinensis   from Kerala, South India, stating that it is a variable species but no description was provided. Pink flowered forms of Spiranthes   have not been observed in southern India, indicating an absence of the true S. sinensis   in this area and the white flowered species reported as S. sinensis   is also most likely to be the new species, S. himalayensis   , described here. Acharya et al. (2010) recently described a new record of S. spiralis   from Pokhara valley in Nepal with glandular hairs and a flowering season similar to S. himalayensis   . It is suspected that this plant from Nepal could also be S. himalayensis   sp. nov. but it was not possible to acquire the specimen for detailed morphological or DNA study. The morphological description in this publication would help with the correct identification of the new species, S. himalayensis   in the future.

Huang et al. (2014) reported the presence of a species of Spiranthes   at an altitude of about 800 m on a grassy slope of Diaoluoshan of Hainan Island, China, which they revised as S. hongkongensis   from a previous misidentification as S. sinensis.   However, based on the plant picture presented in Hainan Rainforest Exhibition Hall, the Hainan species looks like the new species S. himalayensis   (based on floral morphology and lack of fruit set at the base of inflorescence, personal observations). Therefore it is likely that S. himalayensis   might be extending its range up to Hainan Island. Genetic evidence of the occurrence of S. himalayensis   in China has been obtained from a population located in Yunnan where at least two plants were consistently placed in the species clade of S. himalayensis   whether nuclear ITS or chloroplast DNA was used in the data analysis (Surveswaran and Sun, unpublished).

Based on preliminary chromosome counts, Spiranthes himalayensis   and S. nivea   both have a diploid chromosome number of about 30, similar to S. sinensis.   It has been confirmed that S. hongkongensis   is an allotetraploid (4 × = 60), with S. sinensis   as its maternal progenitor ( Sun 1996, Chen and Sun 1998) and most likely the new species S. himalayensis   as its paternal progenitor (Surveswaran and Sun, unpublished). S. hongkongensis   was not included in the phylogeny because it is a well-known allotetraploid ( Sun 1996) and sequencing of cloned ITS sequences of S. hongkongensis   to identify the paternal and maternal progenitors of this species has been performed (Surveswaran and Sun, unpublished). 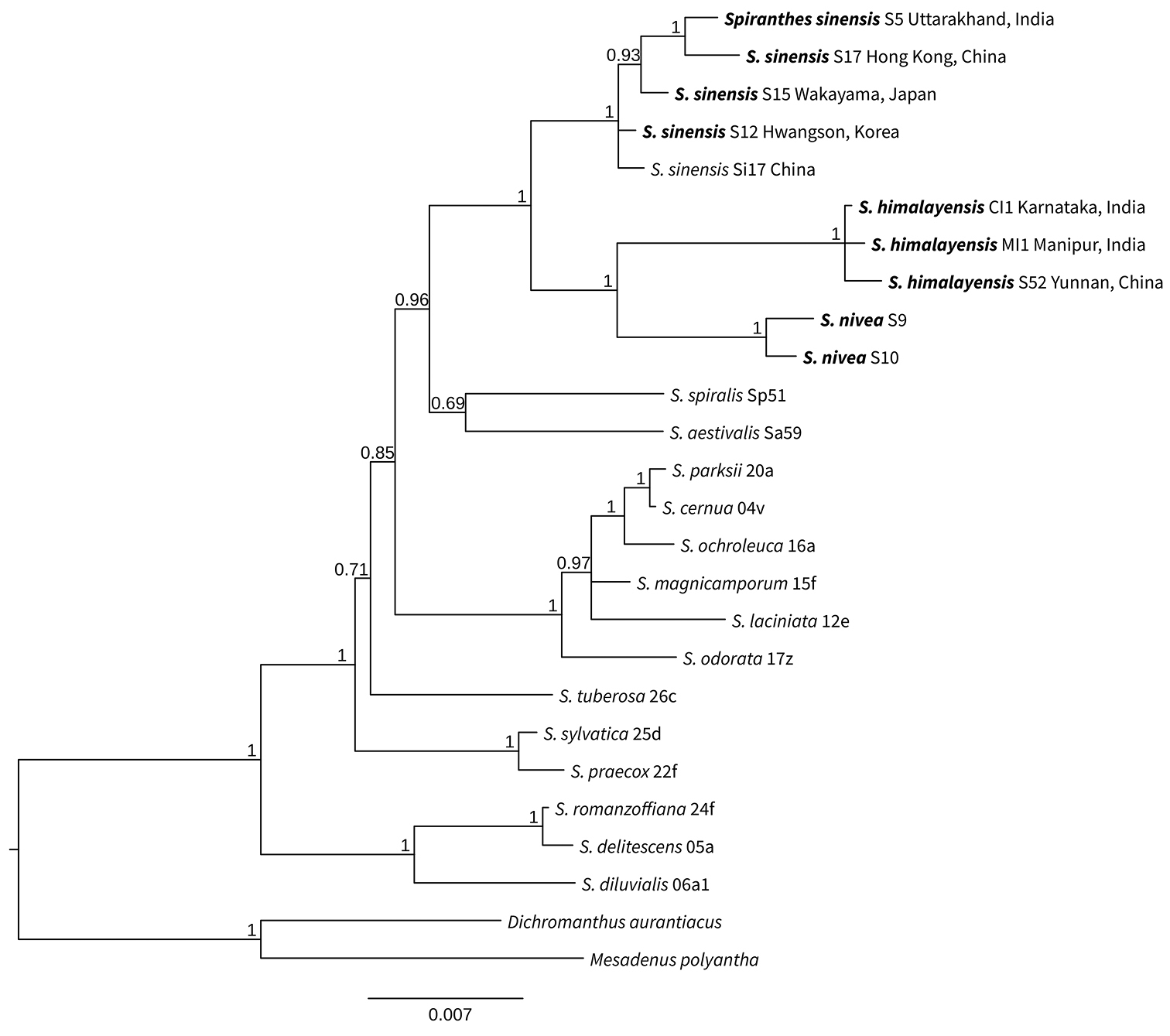 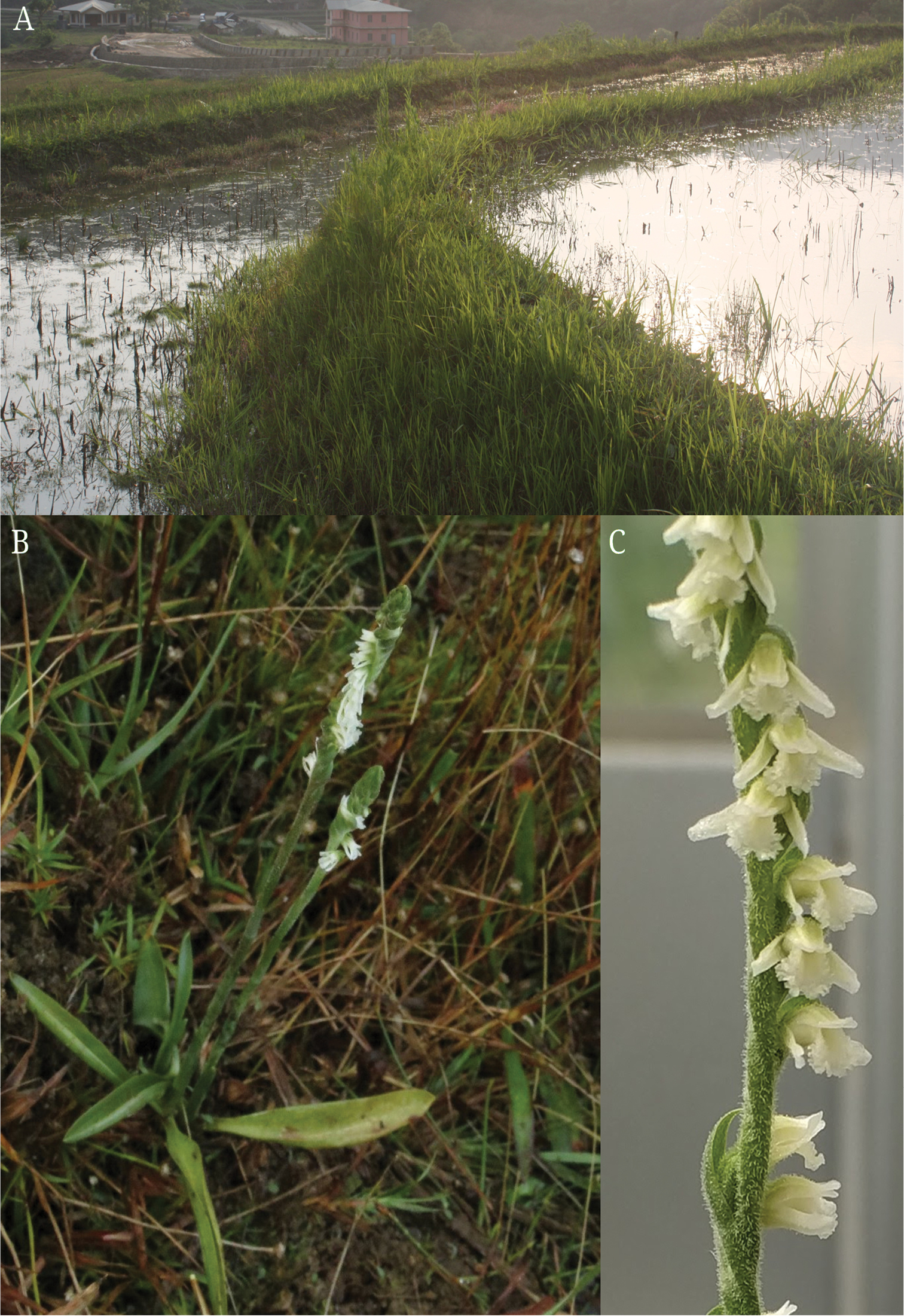 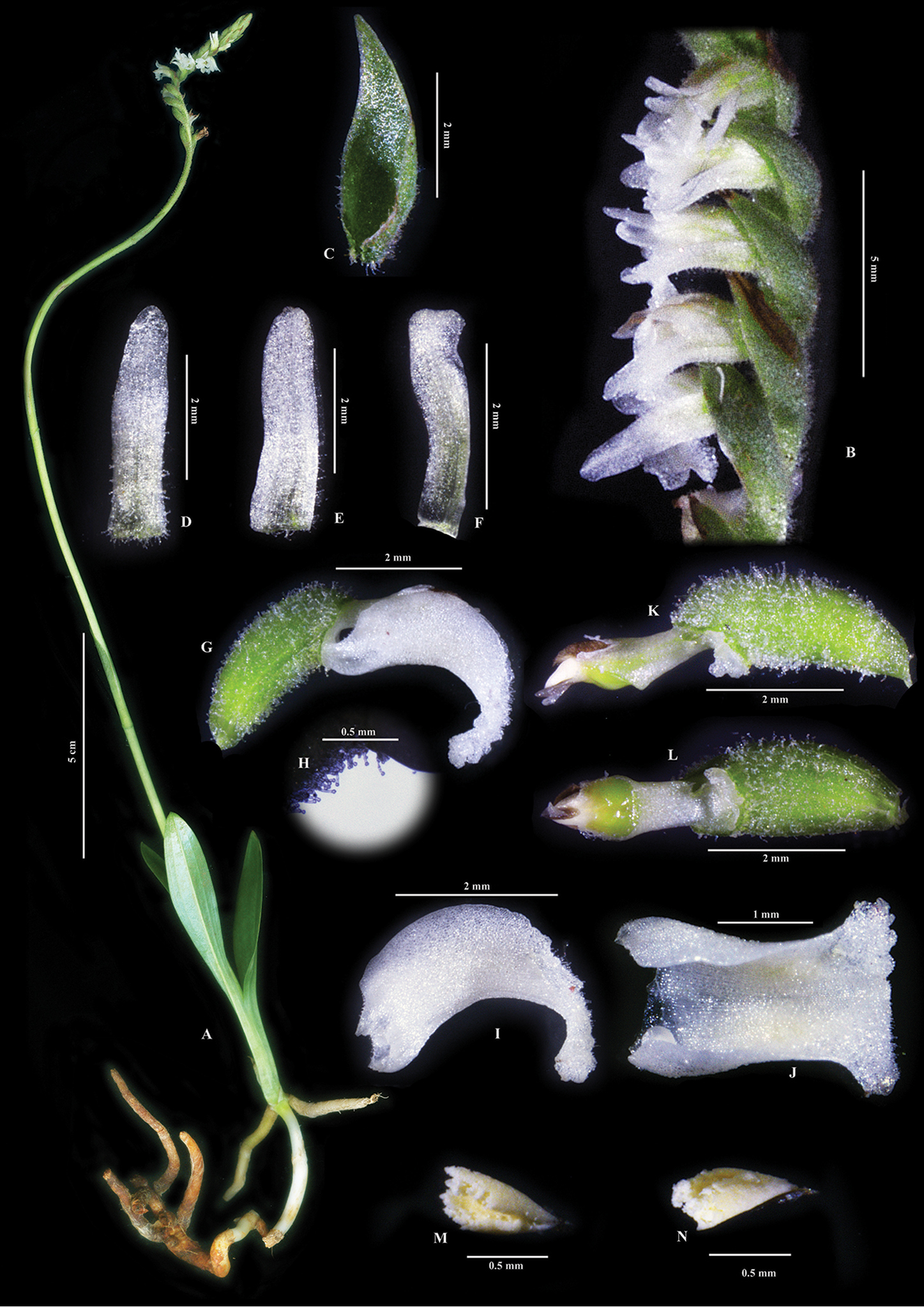 Figure 3. Spiranthes himalayensis Survesw., Kumar & Mei Sun, sp. nov. A Complete plant B Inflorescence C Floral bract D Dorsal sepal E Lateral sepal F Petal G Ovary with column and labellum H Close-up showing the glandular hairs on flower and ovary I Side view of labellum J Top view of labellum K Side view of ovary with column L Front view of ovary and column M Front view of pollinarium N Side view of pollinarium. Note: The pinkish / bluish hue on petals of S. himalayensis is due to the black background in the plates while the flowers appear fully white in natural light. 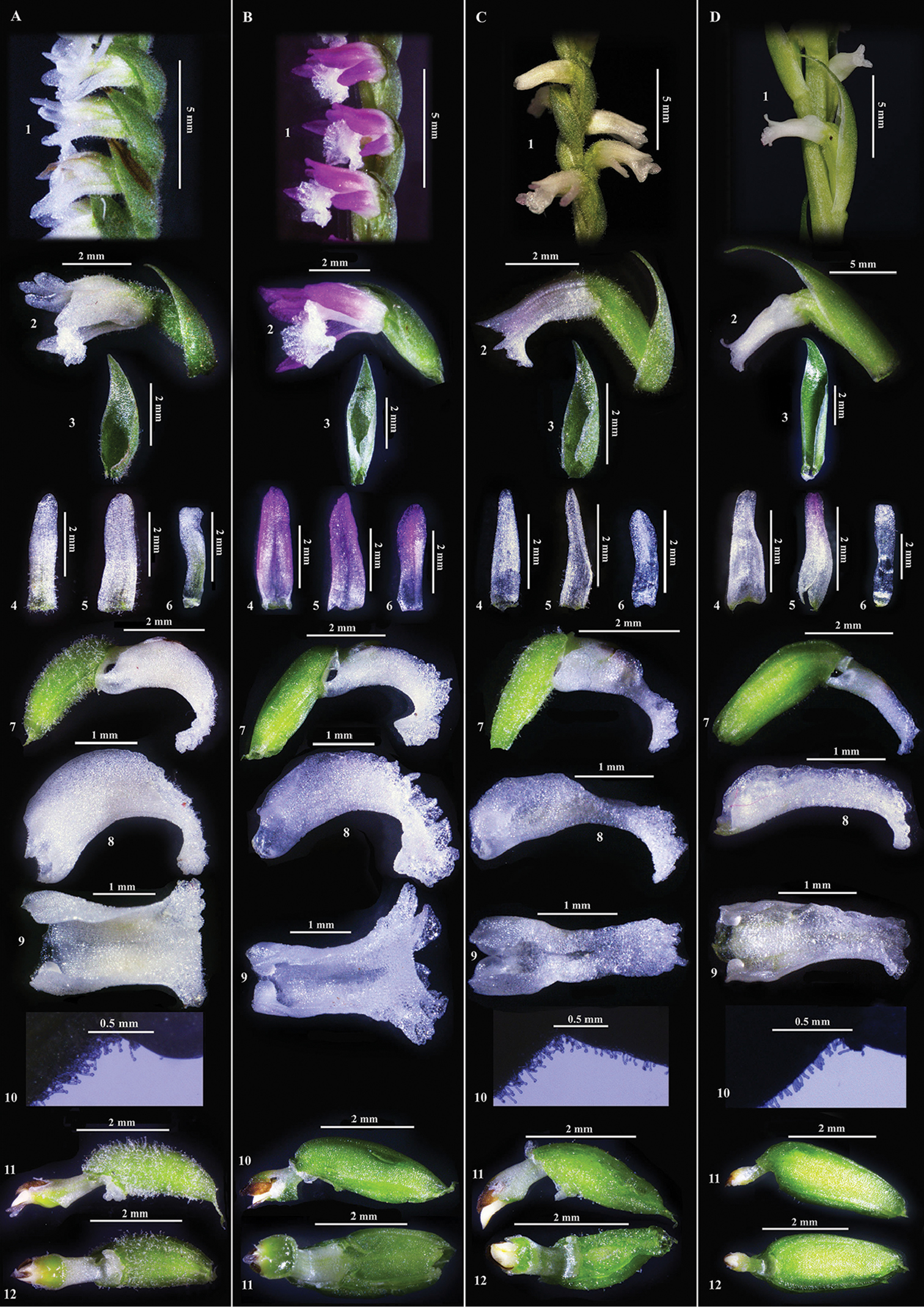