Description. Both sexes. Head elongated, frons rounded. Marginal and ventral carinae uninterrupted. Dorsal preantennal and dorsal postantennal sutures absent. Internal sclerotization present medianly. Head chaetotaxy as in Fig. X; as3 dorsal; mds present as microsetae in V. corpulenta   , not visible in the other two species; pos and mts1 clearly ventral in males of all three species and females of V. necopinata   and V. polytrapezia   , but dorsal in females of V. corpulenta   . Dorsal post-antennal head chaetotaxy varying slightly between species: pas, pns, pts, s1–2, s5–7, s9 present in at least males of all examined species. Smaller sensilla not visible in females, and may be absent; setose sensilla like s1 typically shorter in females than in males. Antennae sexually dimorphic.

Pro- and pteronotum with at least partial strong reticulation. Pterothorax not extended postero-laterally into horns. Pronotum with 1 dorsal anterior seta, 1 pronotal marginal-lateral seta, and 1 pronotal post-spiracular seta on each side. Pteronotum with 1 anterior and 1 posterior submarginal meso-metathoracic seta, 1 pterothoracic trichoid seta, 1 pterothoracic thorn-like seta, and 4 marginal pterothoracic setae on each side; the marginal setae separated into two discrete clusters on each side. Proepimera with detached postero-median plate on which one seta is situated; in some specimens this detached plate is connected to the main proepimera by an ill-defined, poorly sclerotised section. Metepisternum with median extensions in posterior half that protrude interior to meso-mestasternum. All tergopleurites and sternal and subgenital plates of both sexes with extensive reticulation. Tergopleurites II–VIII medianly separated in both sexes. Chaetotaxy of legs as in Fig. 11 View FIGURE 11 .

Male. Temples unique within the Oxylipeurus   -complex, with inner carina running from near site of mts3 to antennal socket; area between inner carina and lateral margin of head seemingly slanted, densely reticulated. Eye with ommatidium visible only dorsally, and ventral surface covered by reticulated continuation of ventral head surface. Antennae with swollen and elongated scape and curved and swollen pedicel. Scape with distinct “thumb” in proximal half. Flagellomere I with distinct finger in distal end ( Figs 5 View FIGURES 5–10 , 16 View FIGURES 16–20 , 25 View FIGURES 25–29 ).

Host distribution. Currently, all the species recognised as belonging to Valimia   in this paper are known from two species of turkeys ( Galliformes   : Phasianidae   : Meleagris   ) (see below). However, if the species discussed below after “Included species” were transferred to Valimia   as a result of a revision, the host distribution of Valimia   species would also cover members of the family Cracidae   ( Galliformes   ).

Etymology. Valimia   is named in honour of Dr Michel Paiva Valim (formerly from the Museu de Zoologia of the University of São Paulo, Brazil), in recognition of his substantial contributions to chewing louse taxonomy, morphology, and classification. Gender: feminine.

Remarks. We examined the same specimens studied by Clay (1938), including most of the paratype series of O. corpulentus   , and we realised that the lice taken from one host individual of Meleagris gallopavo merriami   included three morphologically different species. Two louse species were already named, which we now identified as Valimia corpulenta   and V. polytrapezia   , whereas the third was an undescribed and unnamed species. These samples had also been examined by Kéler (1958). Therefore, the presence of a third, yet undetected, species within this material was doubly unanticipated.

Although males and females in this sample can be tentatively divided into three possible groups based on morphology, there is no certain way to determine which female belongs to which male from their morphology alone. For instance, males of Valimia polytrapezia   can be differentiated by their flat lateral margins of the temples, but none of the three female morphotypes have flat temporal margins. There is also a large degree of overlap in size between the three female morphotypes ( Table 2), and the dorsal postantennal chaetotaxy differs between sexes (see above).

Therefore, we have used the relative extent and pattern of intense reticulation of the thoracic segments to pair up males and females.As a result, the female paratypes of Oxylipeurus corpulenta   remained with the male paratypes of this species, but the non-type specimens identified and labelled by Clay (1938) as “ Oxylipeurus polytrapezius polytrapezius   ” are here identified as a mixture of Valimia polytrapezia   and V. necopinata   . Pairing of males and females based on their thoracic reticulation means that both males and females of V. necopinata   are more numerous than those of V. polytrapezia   . However, genetic data will be required to clearly establish which female morphotype belongs to which species, now based on males. 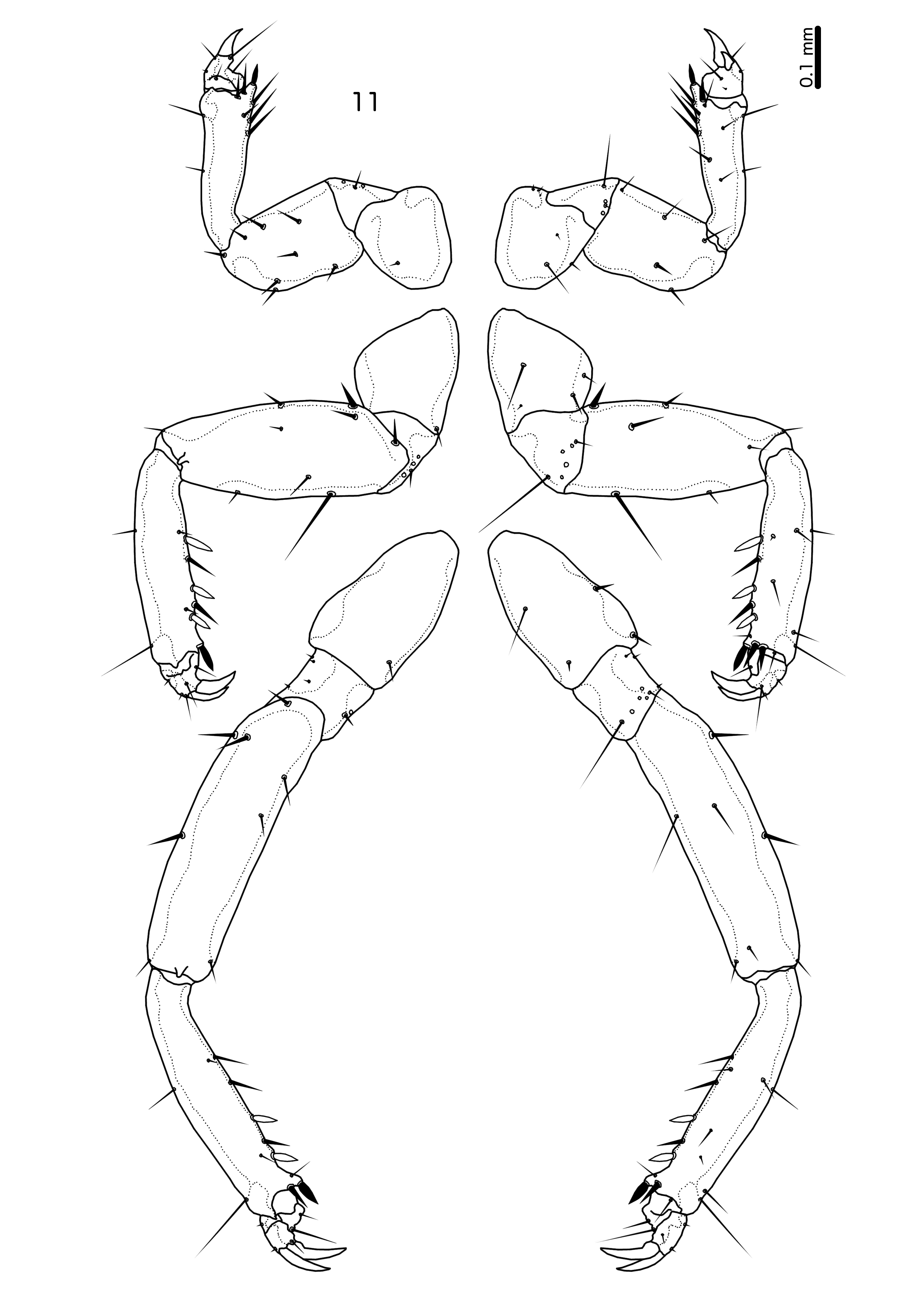 FIGURE 11. Valimia corpulenta. Male legs I–III, dorsal and ventral views. Some setae broken or absent in the illustrated specimen have been included from other specimens. FIGURES 12–13. Valimia polytrapezia. 12, male habitus, dorsal and ventral view. 13, female habitus, dorsal and ventral views. Female legs II–III broken or distorted distally in all examined specimens, and not illustrated. For clarity, the reticulation of the female gonapophyses is shown only partially; in examined specimens, this reticulation covers more or less all of the plates. 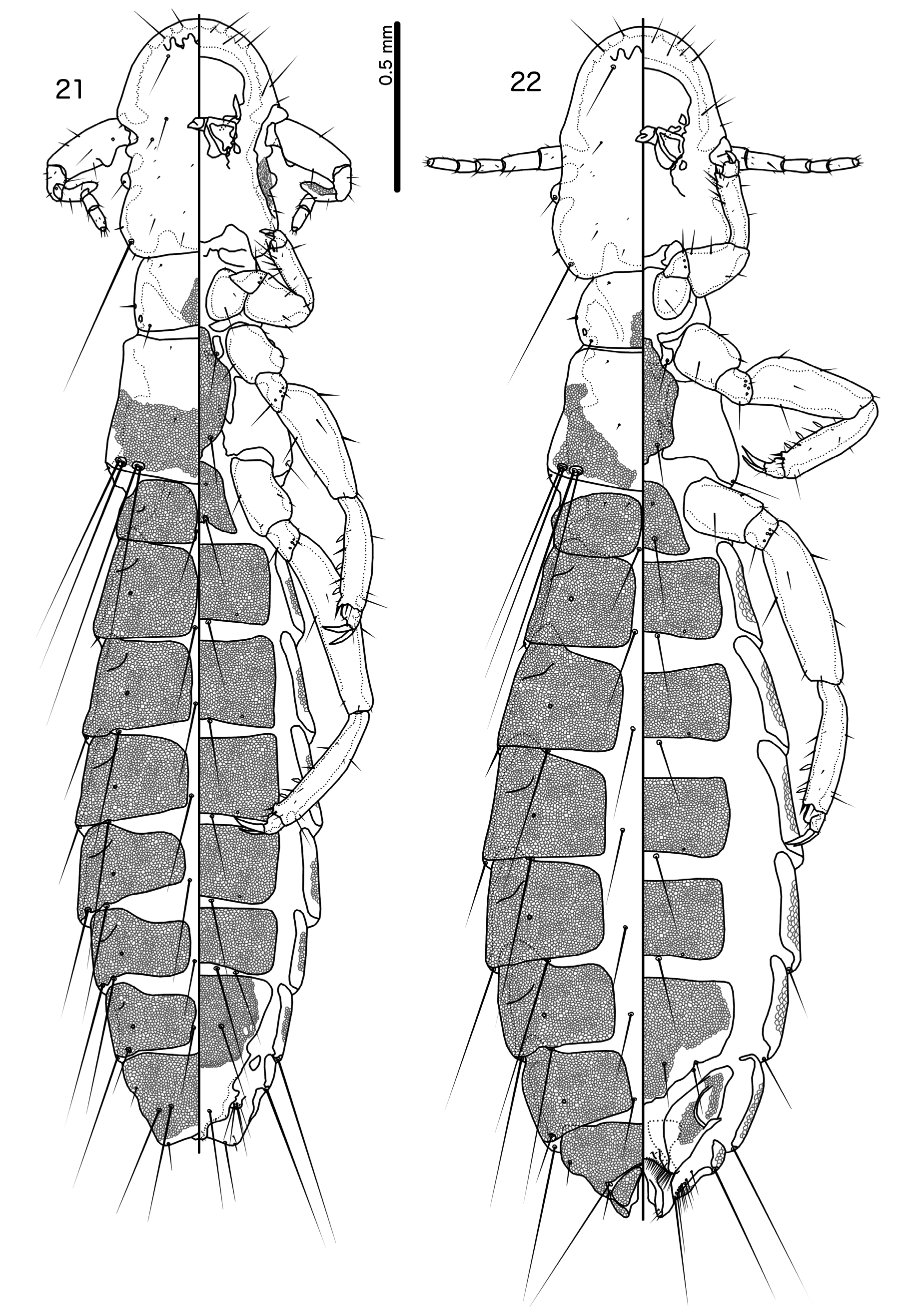 FIGURES 21–22. Valimia necopinata. 21, male habitus, dorsal and ventral view. 22, female habitus, dorsal and ventral views. For clarity, the reticulation of the female gonapophyses is shown only partially; in examined specimens, this reticulation covers more or less all of the plates. Reticulation on the ventral temple of females is similar to that of male, but generally less extensive anteriorly. 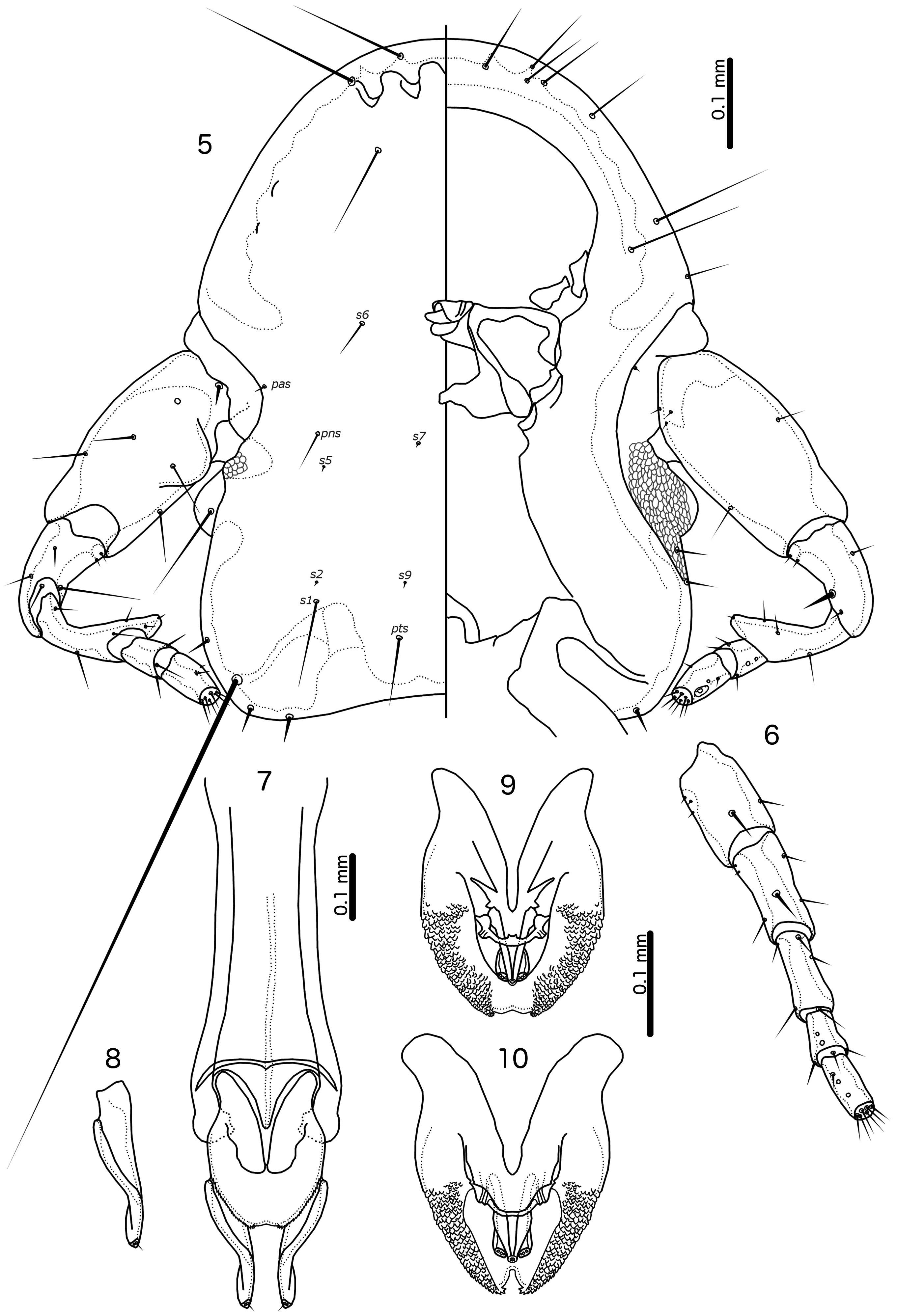 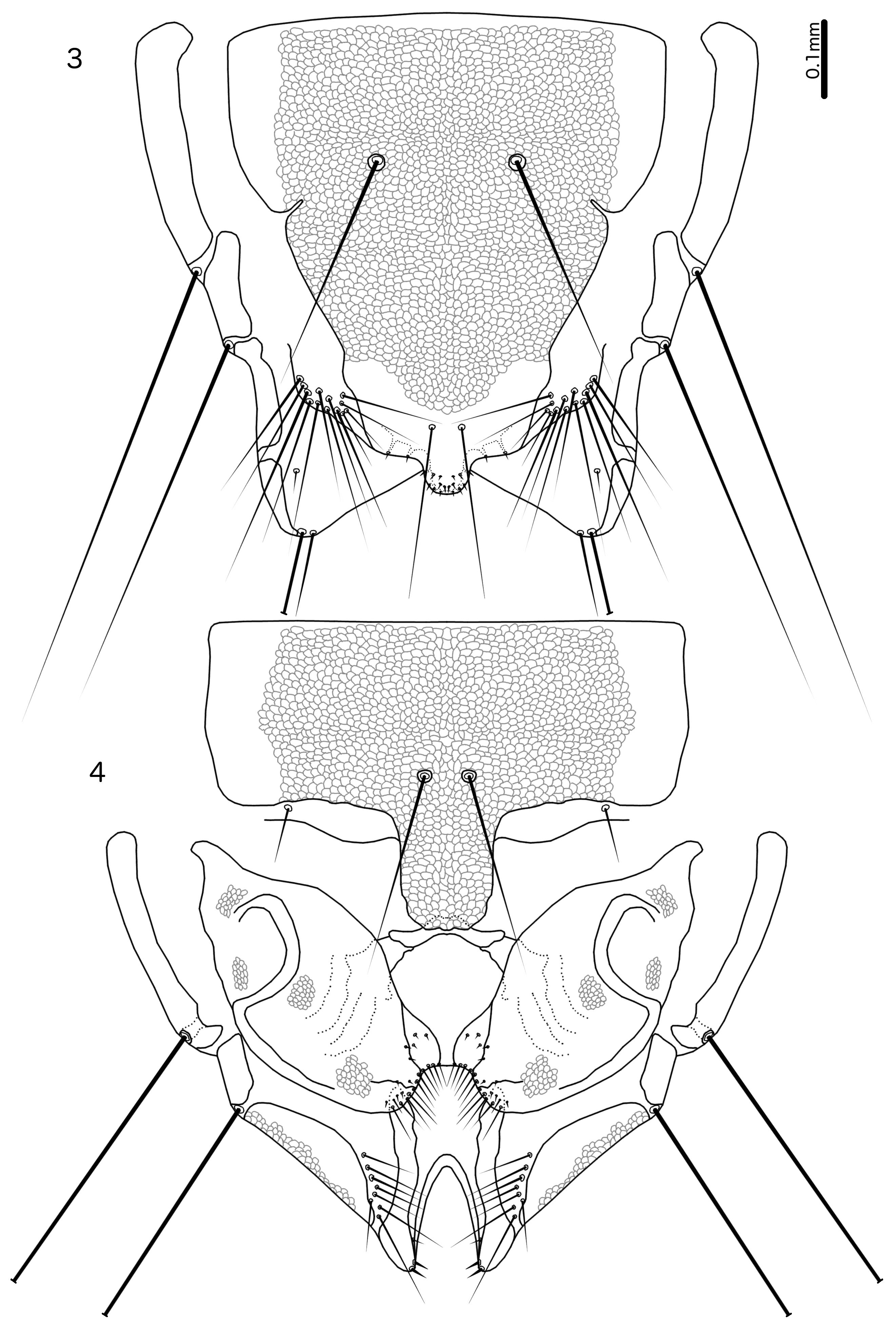 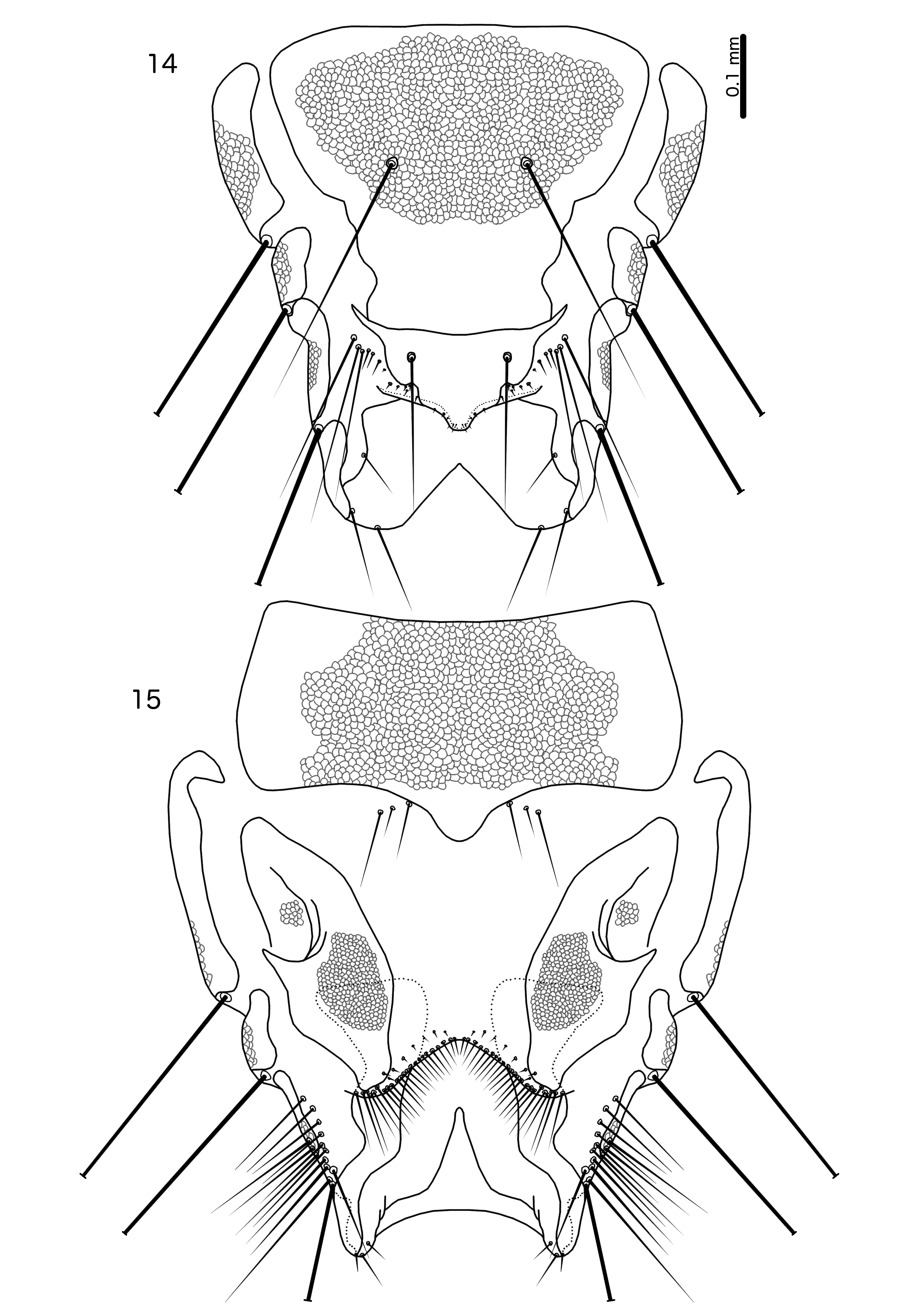