Oxynoemacheilus marunensis   is distinguished from O. kurdistanicus   , which is widespread in the Tigris River drainage, by having a more slender caudal peduncle [caudal peduncle depth 9.8–11.3 vs. 7–8.6 (% SL)], and from O. euphraticus   by having longer distance between pelvic and anal-fin origins. [22.3–23.8 vs. 20.0–22.5 (% SL)] and shorter snout length [37.6–43.9 vs. 42.6–49.6 (% SL)]. It is also distinguished from those two species, O. kurdistanicus   and O. euphraticus   , which are widespread in the Euphrates and Tigris River drainages, by having many minute dark-brown spots on the back, the flank above the lateral midline, and the caudal peduncle, with a mottled colour pattern in the interspaces of the saddles and large blotches on the back or these interspaces with vermiculated pattern (vs. without spots, vermiculation or mottling, in some individuals with small, vertically-elongated and transversely-positioned blotches), flank usually with a mid-lateral row of short, vertically-elongated blotches usually not confluent with the saddles on the back (vs. regularly or irregularly shaped bars on the flank behind the dorsal-fin base) (see Freyhof 2016).

Oxynoemacheilus marunensis   is distinguished from O. argyrogramma   in the Euphrates and Qweik river drainages, by having a series of vertically elongated blotches or short bars along the lateral midline (vs. marbled or mottled colour pattern on the flank) and dark-brown blotches behind the dorsal-fin base being narrower than interspaces (vs. as wide or wider) (see Freyhof 2016).

It is distinguished from O. hanae   , the other species in this group from the Sirvan River drainage, a left side tributary of the Tigris River in Iraq, by the two black blotches or spots at the caudal-fin base prominent in life and preserved fishes (vs. usually being invisible in life, indistinct and overlaid by a chevron-shaped, dark-brown or black bar), the lower flank with irregularly shaped and set brown blotches forming a continuous pattern with lateral and dorsal flank pattern (vs. flank below the lateral series of blotches without colour pattern except for a longitudinal series of isolated patches of blotches or a row of small dark-brown spots) (see Freyhof & Abdullah 2017).

Colouration: Head and body with yellowish background colour and brown pattern. Head brown on top to lower margin of eye or with spotted pattern, cheeks and ventral head surface without colour pattern. A dark-brown line between the anterior eye-margin and tip of the snout. Pre-dorsal with one to two, wide dark-brown blotches, equal or slightly wider than interspaces. Large, brown blotch at dorsal fin-origin. Two or three, wide dark-brown blotches on upper caudal peduncle, fused with blotches on flank forming saddles in few individuals. Flank below line between pectoral-fin base and anus without pattern. Flank with 7–10 dark-brown, irregularly shaped, vertically elongated blotches along lateral midline. Flank blotches narrower than interspaces, usually dissociated and often faded in front of dorsal-fin origin, more clearly set on caudal peduncle, rarely joined with saddles on the back or forming bars on the flank. Back, flank above the lateral midline and caudal peduncle with many, minute dark-brown spots, vermiculation, or even a mottled colour pattern at interspaces of saddles and large blotches. One distinct, small, roundish or comma-shaped, black spot at upper and lower posterior extremity of caudal peduncle. Dorsal fin with 2–3 and caudal fin with 3–5 brown bands of small, elongated blotches on fin-rays. Anal-, pelvic- and pectoral fins hyaline, with few dark-brown spots on rays.

Distribution and Habitat: Oxynoemacheilus marunensis   is known from the Marun, a tributary of the Jarrahi River, which flows just east of the Tigris River to the Persian Gulf.

At the sampling site, the river is about 10 m wide, with a substrate consisting of coarse gravel and small boulders, with moderate flow and semi-transparent waters ( Fig. 8 View FIGURE 8 ). Drought, water use, and pollution are the main threats to this fish.

Etymology: Oxynoemacheilus marunensis   is named for the Marun River inhabited by this species. An adjective.

Comparative remarks: Freyhof (2016) considered the oxynoemacheilid population from the Marun River as O. karunensis   along with some populations from the Karun River. He examined three specimens from the Marun River (SMF IR7, 3, 36–44 mm SL) and provided the morphological characters. In a comprehensive molecular study based on the COI barcoding region including all the Iranian and other oxynoemacheilid sequences from the Middle East available in the GenBank ( Fig. 1 View FIGURE 1 ), we found two different clades for populations from the Marun and Karun Rivers with approximately 6% K2P COI sequence divergence whereas they are similar morphologically. In addition to molecular distinguishing characters, O. marunensis   is distinguished from O. karunensis   ( Fig. 9 View FIGURE 9 ) by having a longer distance between pelvic and anal-fin origins. There are also some distingiushing (but overlapping) morphometric characters such as head length; pectoral-fin and pelvic-fin length (see Table 4 View TABLE 4 ).

Among congeners studied for molecular characters, O. marunensis   is characterised by a K2P nearest neighbor distance of 2% to O. frenatus   ( Table 3 View TABLE 3 ), whereas, they are largely diverged based on morphological characters. Oxynoemacheilus marunensis   is distinguished from O. frenatus   by having a suborbital groove in males (vs. absent), a deeply emarginate or forked caudal fin (vs. slightly emarginate), complete lateral line (vs. incomplete), and having two prominent black spots at the caudal-fin base (vs. absent). 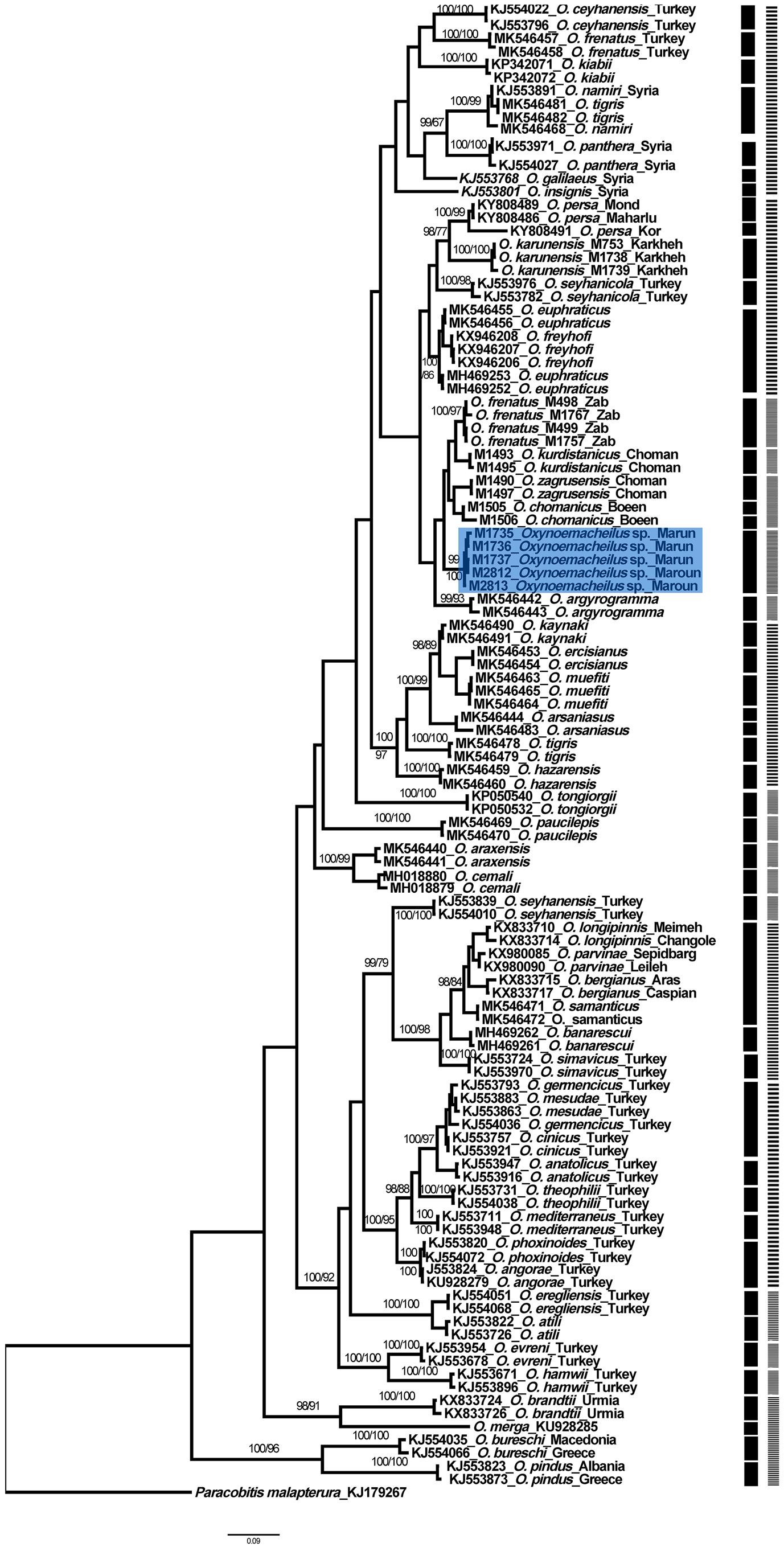 FIGURE 1. Maximum Likelihood and Bayesian phylogeny reconstructed based on 617 bp of COI 5’ end. The values besides the branches before and after a slash are BI posterior and ML bootstrap probability values, respectively. Black bars right to the specimen labels indicates species delimitation results from PTP followed by the results of the mPTP approach as dashed bars. 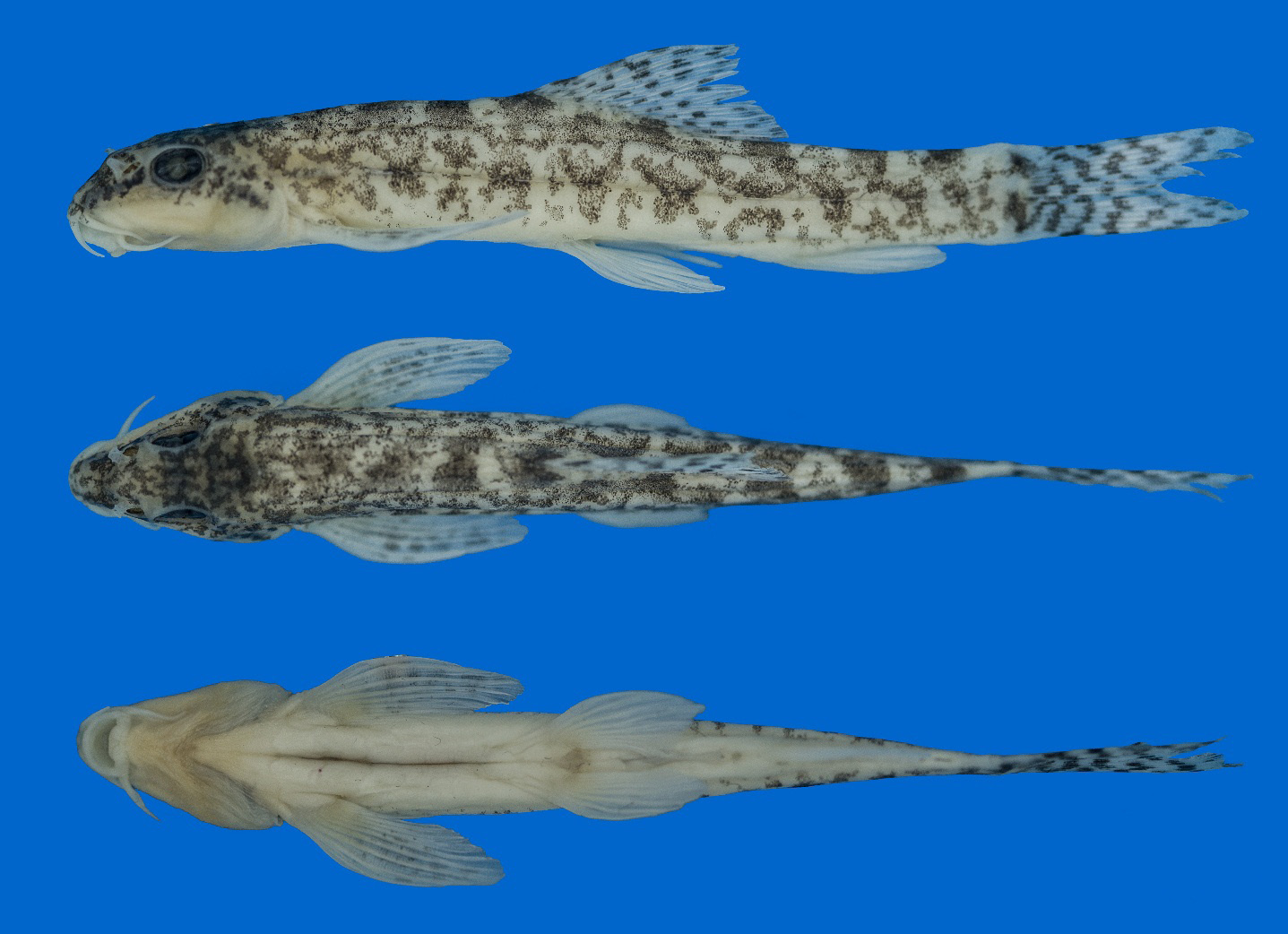 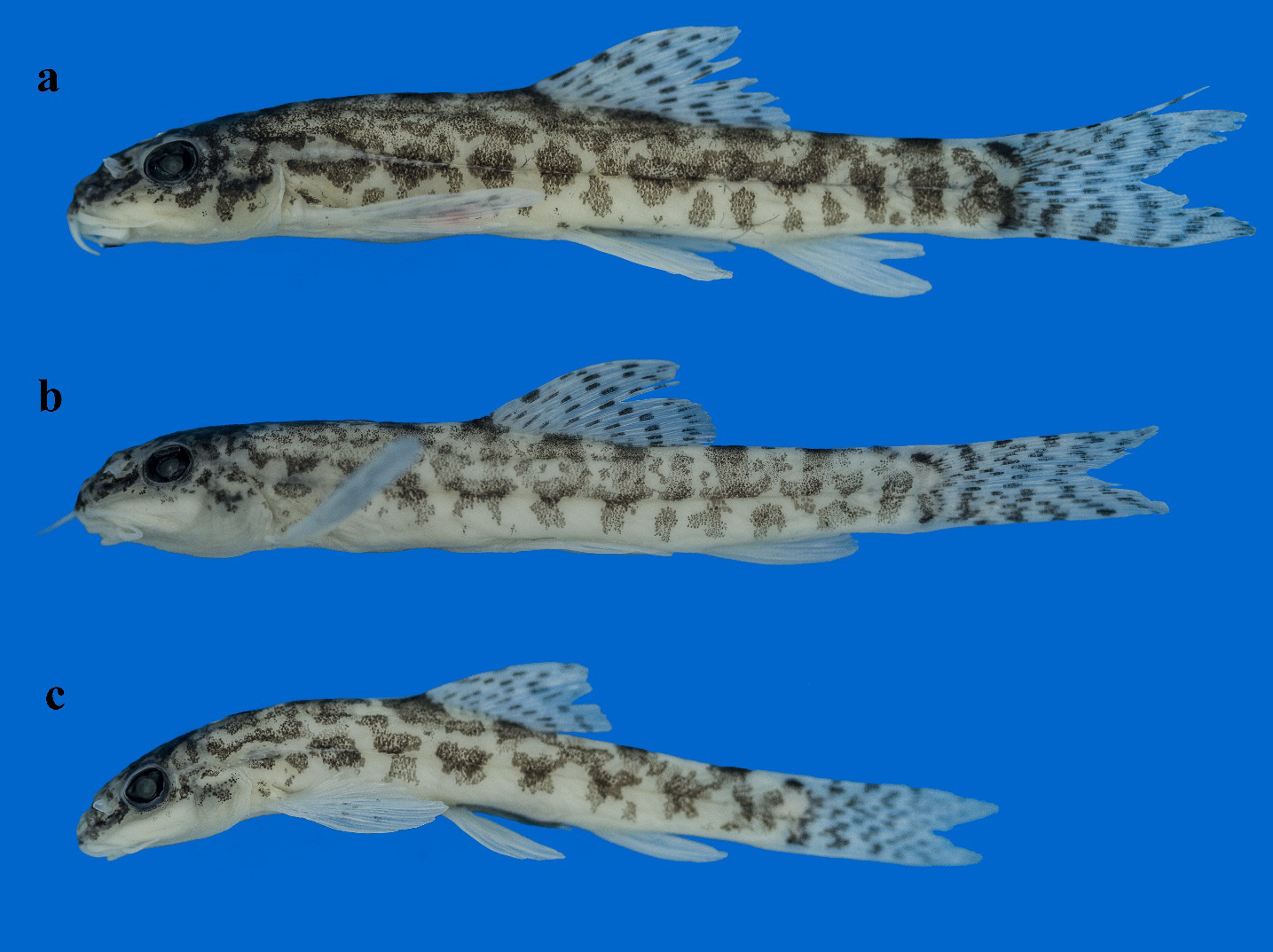 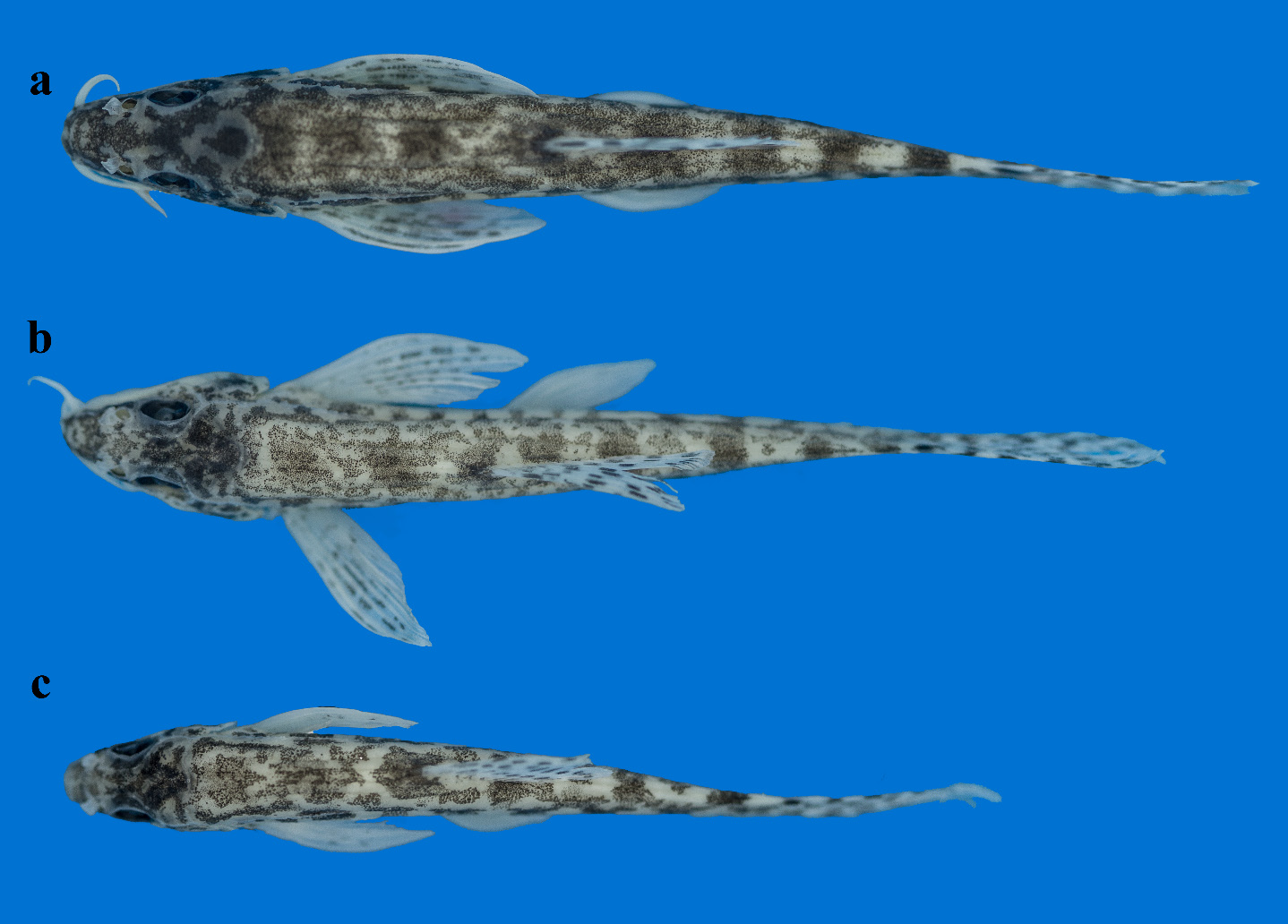 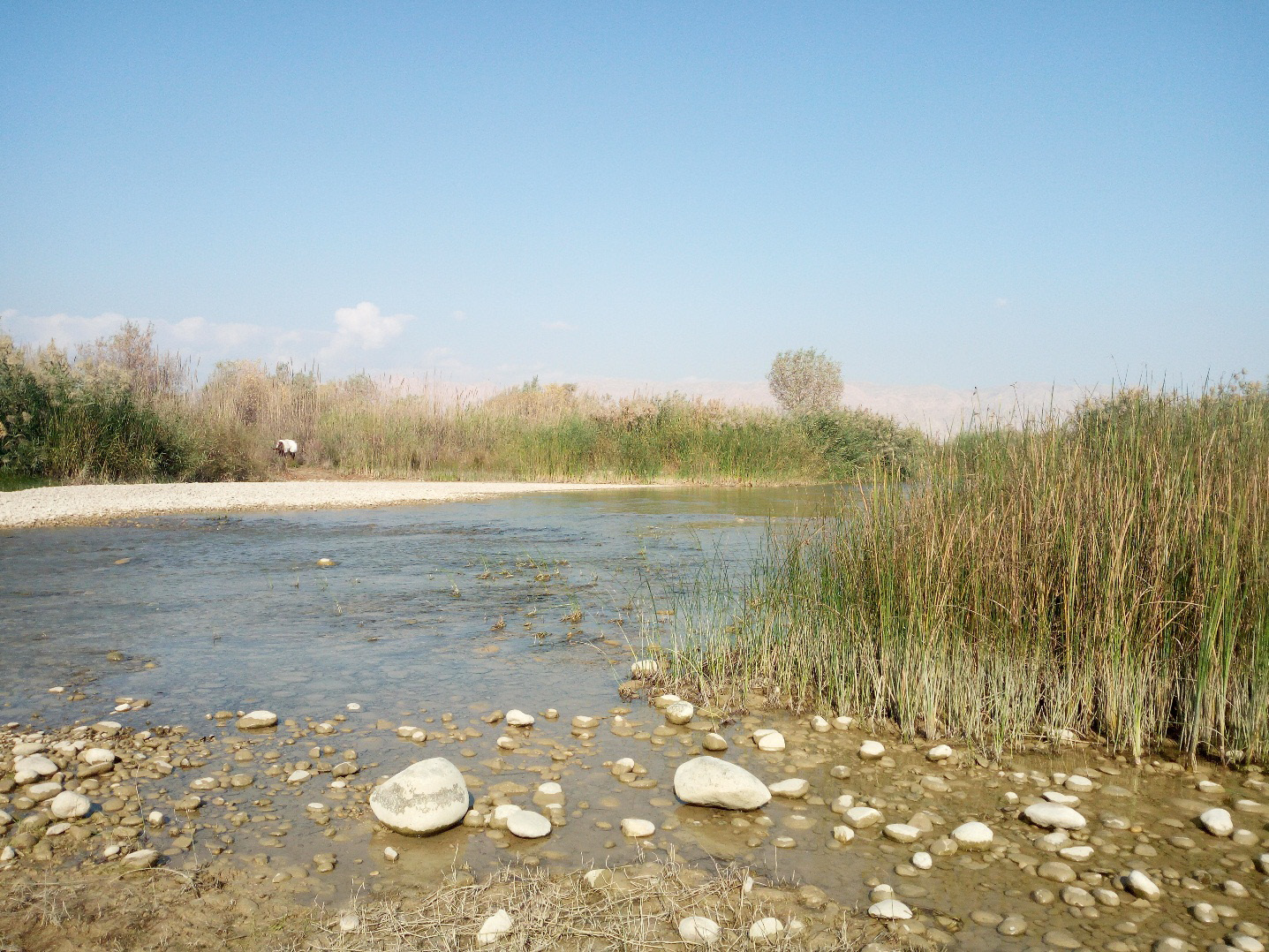