Anopheles wejchoochotei  is morphologically similar to An. campestris  but ITS2 sequence data (not available for An. campestris  ) indicate that it is the sister species of An. barbirostris  ( Fig. 4View Figure 4). Anopheles wejchoochotei  and An. barbirostris  are distinguished and identified by differences in their COI and ITS2 sequences (see below). Some potentially differential morphological characters are denoted below, but the two species are essentially isomorphic.

Anatomical features compared with other species of the Barbirostris Complex in Table 1, generally smaller than An. barbirostris  , lengths of proboscis, maxillary palpus, antennal flagellum, wing, vein R 4+5, and forefemur statistically significantly shorter ( Table S2); similar to the female of An. campestris  ; apical pale band of hindtarsomere 3 0.06–0.10 mm (mean 0.09 mm), not extended across joint onto base of hindtarsomere 4 in 10% of females examined.

Similar to the male of An. campestris  ; aedeagus with three to five pairs of leaflets; other characters of genitalia listed in Table 2, none statistically significantly different from those of An. barbirostris  ( Table S3).

Cross-matings of An. wejchoochotei  (as An. campestris  - like Form E) with An. campestris  -like Forms B, E, and F produced fully fertile offspring, yielding high percentages of emergence. Backcrosses between the F 1 offspring and the respective parental strains yielded fertile F 2 progeny. However, crosses between An. campestris  -like Form E and An. barbirostris Forms A  (= An. barbirostris  , An. dissidens  and An. saeungae  ) and B (= An. dissidens  and An. saeungae  ) failed to yield offspring ( Saeung et al., 2007; Suwannamit et al., 2009).

Suwannamit et al. (2009) found larvae of An. wejchoochotei  (as An. campestris  -like form E) in rice fields at 310 m above sea level in San Sai District of Chiang Mai Province. Adult females are known to attack and bite humans (the mothers of the broods that comprise the type series of this species were collected in human-baited traps). Limrat et al. (2001) and Apiwathnasorn et al. (2002) reported that either An. barbirostris  or An. campestris  is a probable vector of malaria in Sa Kaeo Province in eastern Thailand where high numbers of females were captured landing on humans both indoors and outdoors; however, no sporozoites of P. vivax  developed in An. wejchoochotei  females (as An. campestris  -like Form E) from this province during experimental infection studies conducted by Thongsahuan et al. (2011). It is interesting to note, however, that 66.67 and 64.29% of females of Forms B and E, respectively, of this species from Chiang Mai Province did develop sporozoites of P. vivax  .

Based on COI, COII, and ITS2 sequences, An. wejchoochotei  is currently only definitely known to occur in Thailand (Ayuttaya, Chanthaburi, Chiang Mai, Chiyaphum, Chumphon, Kamphaeng Phet, Khon Kaen, Maha Sarakham, Mukdahan, Prachuap Khiri Khan, Sa Kaeo, and Udon Thani Provinces; Thongsahuan et al., 2009, as An. campestris  -like; present study). However, because it is so widely distributed in Thailand, it is likely to occur in neighbouring countries.

This species is named in honour of the late Prof. Dr Wej Choochote ( Department of Parasitology , Faculty of Medicine, Chiang Mai University, Chiang Mai, Thailand) for his many contributions to our knowledge of mosquitoes in Southeast Asia, especially his studies of the Barbirostris Group, which provided the taxonomic foundation for further studies of this medically important group of insects  . 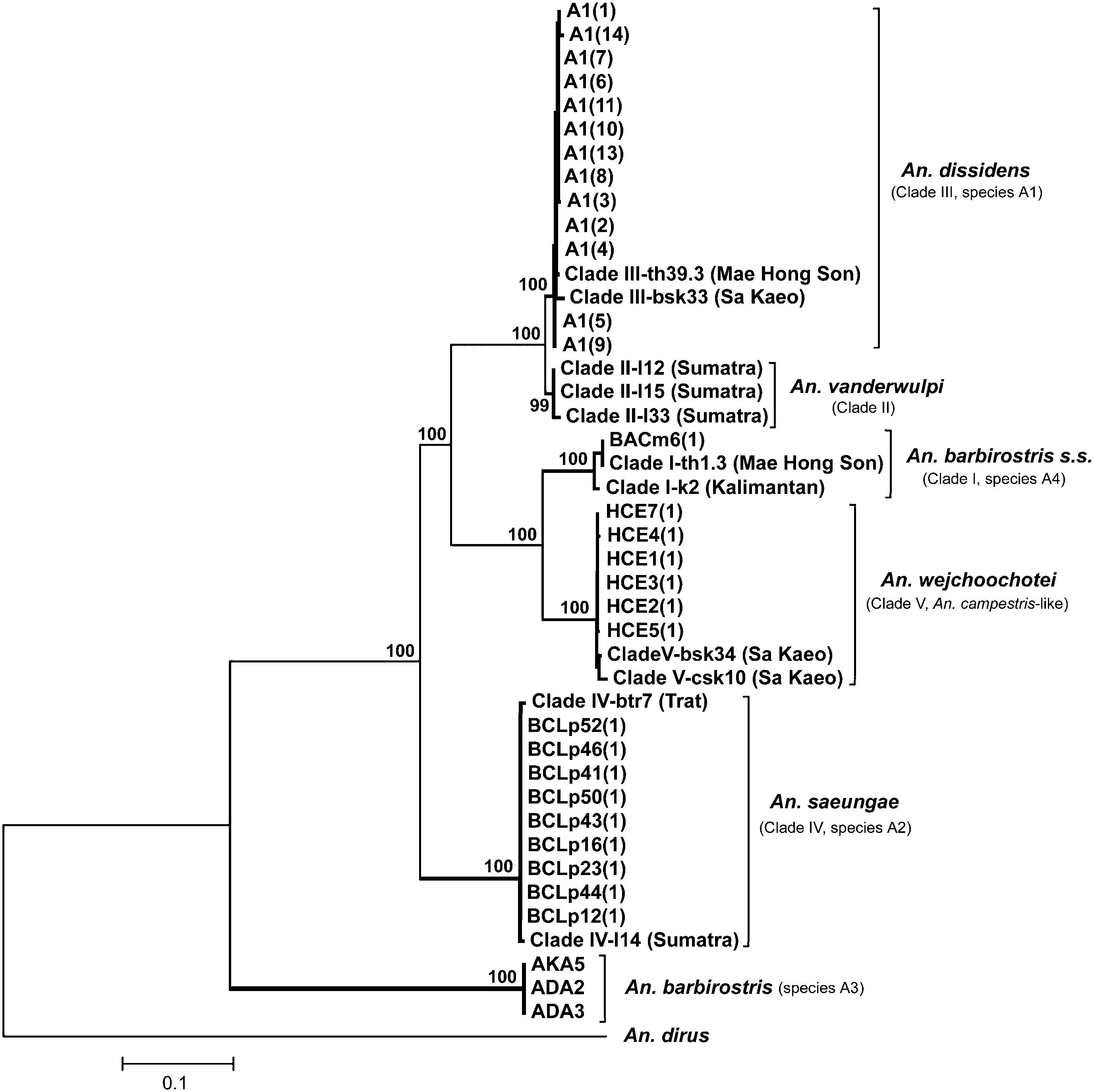 Figure 5. Bayesian consensus tree for internal transcribed spacer 2 sequences. The tree is rooted on Anopheles (Cellia) dirus. Only Bayesian posterior probabilities greater than 50% are shown on the branches. The bar represents 0.1 substitutions per site. 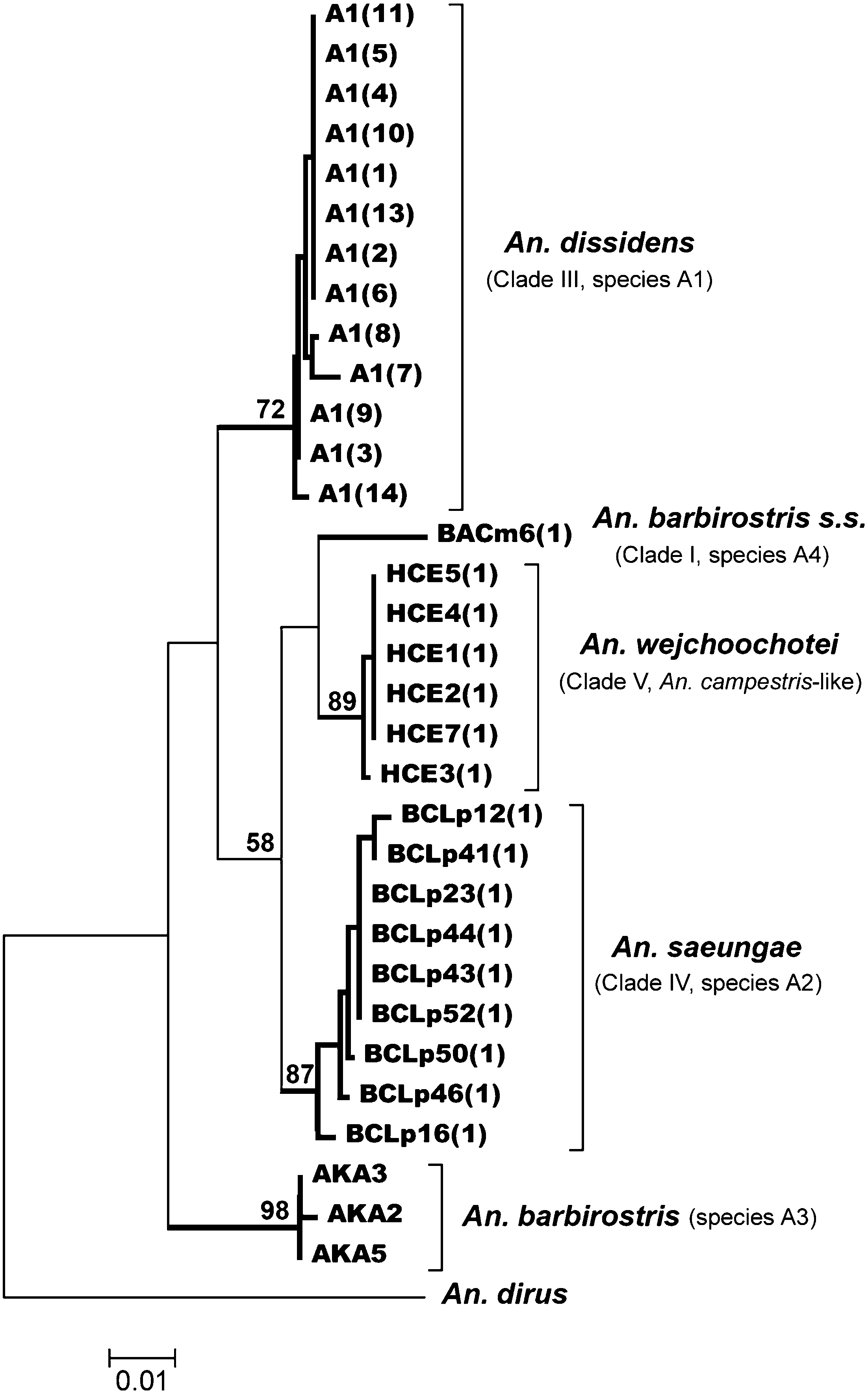 Figure 6. Bayesian consensus tree for cytochrome c oxidase subunit I sequences. Only Bayesian posterior probabilities greater than 50% are shown on the branches. The bar represents 0.01 substitutions per site.