ETYMOLOGY. — This species is named after Dr Olga Hartman, eminent taxonomist of polychaetes from the Allan Hancock Foundation, University of Southern California, to honor her immense legacy including lots of publications and new taxa, and because she provided some relevant details to recognise these specimens as a different, undescribed species. The name is a noun in genitive ( ICZN 1999: art. 31.1.2).

Tentacular cirri undulated, longest reaching chaetiger 4. Lateral cushions projected, with 2 sections in anterior to median chaetigers, and with 3 ones in posterior segments.

Pharynx not everted in holotype (smaller paratype with pharynx almost fully everted, margin slightly eroded, made up by three rings, basal one slightly corrugated, dorsal papillae rounded, as long as wide). Oocytes about 100 µm in diameter.

A rather weak dorsal darkening in one of the smaller paratypes, even less defined in largest paratype. Prostomial shape varies depending on pharynx exposure from having a squarrish outlook, with lateral margins slightly divergent in smallest paratype ( Fig. 19A, B View FIG ), to one with rounded lateral margins, markedly divergent if the pharynx is not exposed ( Fig. 19D, E View FIG ). In smaller paratypes, acicular lobes with upper tine twice as long as lower ones ( Fig. 19C View FIG ), or of similar size in largest paratype ( Fig. 19F View FIG ).

Hesione hartmanae   n. sp. was likely recorded before under three different names. Monro (1933: 26) cited what Cyril Crossland noticed about the pigmentation of some Panamian Hesione   : “There are five transverse brown bands of irregular outline anteriorly, the first on the anterior border of the peristomium, the others occupying the anterior third of each segment, the middle third being white, while the posterior third is a light brown but darker than the general body color behind the fifth segment.” Monro referred that specimen to H. splendida Savigny in Lamarck, 1818   , which had been observed alive and described with a pearly iridescent body, but without pigmentation. It must be noted that this Panamian specimen had been less than 10 years in ethanol before Monro studied it, and he indicated there was no pigmentation left on its body.

Hartman (1940: 212) preferred to use H. intertexta Grube, 1878   , and, as indicated below in the remarks for H. panamena Chamberlin, 1919   , her illustrations show an acicular lobe double with tines of similar size, which are not present in H. intertexta   , meaning she had two species in her material. It seems she was unaware of the previous indications by Horst (1924: 193), who emphasised that acicular lobes were of very different size and shape in H. intertexta   : a longer, digitate and the other one shorter, rounded. Different sized tines are also present in H. panamena   , as indicated above. Hartman made no indication of transverse bands but stated that in her material: “most individuals retain the reticulated, fulvous pattern on the dorsum of the anterior segments, but in some there are almost none.” This fading is typical for those species having longitudinal thin lines along the body. In some of the specimens regarded as belonging to H. hartmanae   n. sp., there is a fine indication for darker tranverse areas in anterior segments, despite the fact they have been in ethanol for about 70 years.

As indicated in the key below, H. hartmanae   n. sp. resembles H. picta Müller, 1858   and H. reticulata von Marenzeller, 1879   . Their main difference is the length of the acicular lobe in comparison to the width of the corresponding chaetal lobe. In H. hartmanae   n. sp. it is longer, about half as long as chaetal fascicle width, whereas it is shorter (1/3 as long) in the two other species. 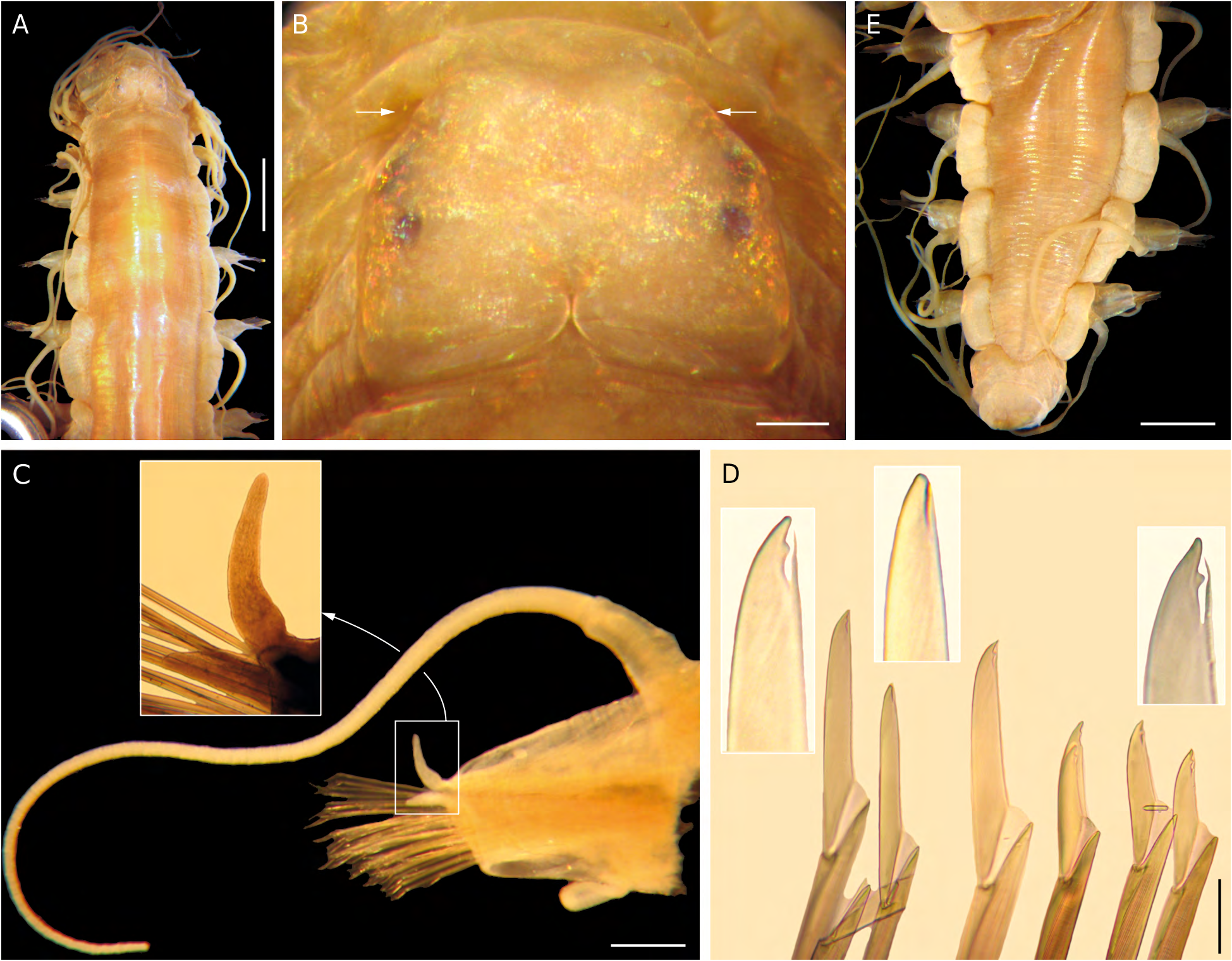 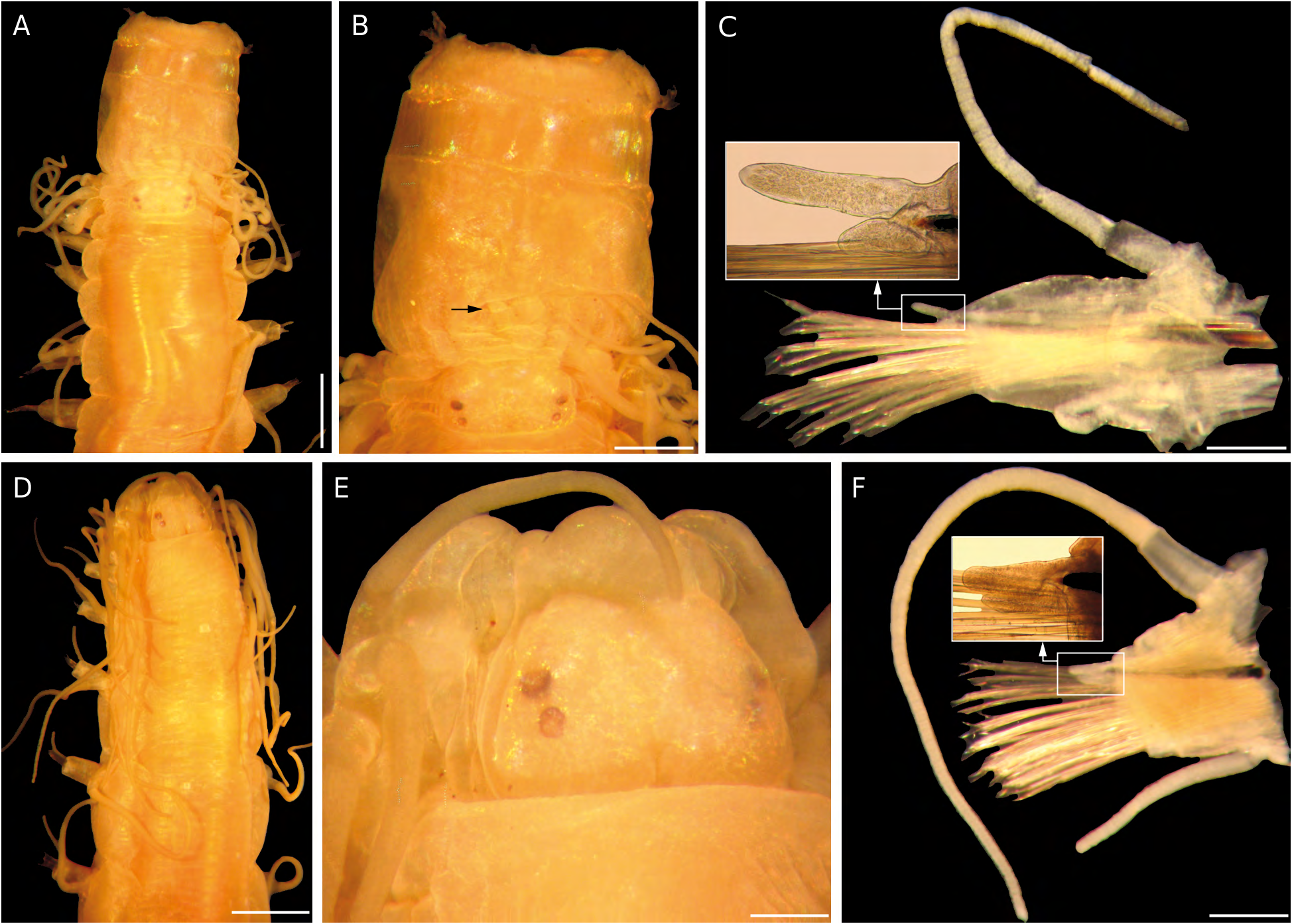