Large trees 7-10 m tall, 16-20 cm in diameter at base, robust, straight, with 4-6 branches each ending in a clump of scythe-shaped leaves, prop roots forming a cone with the apex at 1-1.5 m above ground. Leaves caniculate, coriaceous, 75-80 cm (120-130 cm in pistillate plants) in length, 5 (-8) cm wide near the base, 3.5-4(-6) cm in the middle, with two auricles at base 6(-15) × 0.8 (-1) cm, acuminate, not flagellate; marginal prickles beginning 6(-15) cm from the base, 4(-6) mm long, up to 7(-10) mm apart, midrib armed with small prickles at 13(-20) cm from the base to the apex; when dried, abaxial face light brown, adaxial face dark brown, easily split apart at the midrib when flattened. Terminal inflorescence pendant in the middle of the clump of leaves; peduncle 73 cm long, 1.5 cm in diameter, spherical, hispid, bearing 11 bracts, the first three sterile; internodes 1-4 cm (7 cm between the first and the second); first bract born 23 cm from the base, all bracts lanceolate; the lowermost is 35 cm long, 4-5 cm wide in the middle; the midrib and the costal rib armed from 12 cm to the base with little prickles (0.3-0.5 mm long) up to 1-2 mm apart; bracts flexuous in the lower 1/4, then subcoriaceous, abortive in the last three inflorescences; subtending 14 inflorescence spikes (up to 17 cm long, 3 cm wide); flowers arranged densely in each spike of the inflorescence; 3-20 stamens per flower (the filaments is often fused); anthers 1.5 × 0.3 cm, mucronate, arranged at the apex of the filament; the filament is 6- 10 mm long, 0.7-1 mm wide, often fused (up to 5- 8 mm wide). Pollen grains obovoid to spherical, 20 µm long, spinulose, with an apical aperture.

NOTES. — This species occurs along the east coast of Madagascar, in swamps, often in secondary littoral forest from elevation 0-30 m ( Fig. 1 View Fig ). Its vernacular name is Bobaka in the Betsimsaraka language   .

Pandanus imerinensis   is a remarkable species. It was first placed by STONE (1970a) in Pandanus sect. Rykiella   (subg. Rykia   ) because of its comparable spiniform style ( Fig. 3B View Fig ), but later he assigned it to section Lonchostigma along with P. rollotii   and P. peyrierasii ( STONE 1974)   , altought he indicated that it was «… placed here with much doubt, for although the styles are comparable, other characters are greatly different; especially the multicephalic inflorescence on its long, hispid peduncle.» (cf. Figs. 3A, 3D View Fig ). HUYNH (1979a) then based his new monotypic sect. Imerinenses on this species, distinguishing it because of the micromorphology of leaves. With the discovery of a staminate plant, new arguments for the systematic and biogeographic position of P. imerinensis   can be made.

The staminate flowers of Pandanus species   are not very useful in intraspecific comparison because of low variation of its morphology, a notable exception being subg. Martellidendron (cf. CALLMANDER 2001). They are however useful for differentiation between sections ( HUYNH 1977). Pandanus rollotii   , whose ecology and morphology are close to members of Pandanus subg. Rykia   , clearly belongs to subg. Vinsonia   , largely because its staminate flowers have a candelabralike displacement of their stamens ( HUYNH 1977: 460, fig. 22) instead of the pseudo-umbel found in members of subg. Rykia   ( STONE 1974). In Pandanus imerinensis   , the staminate flowers also have a candelabra-like stamen disposition ( Fig. 6E View Fig ), but this is a result of secondary ramification of the stamen columns, whereas in Pandanus subg. Rykia   the stamen column is never twice ramified (This is especially evident on the type of P. ceylanicus   ( MARTELLI 1913: figs. 25-27, pl. 29). The anthers of P. imerinensis   are small and mucronate ( Fig. 6F View Fig ), its pollen is spinulose ( Fig. 6D View Fig ), and its inflorescence holds many spikes ( Fig. 2 View Fig ), all characters that are common throughout the genus. Less frequent is the hispid peduncle ( Fig. 3D View Fig (a), 3D(b)), a rare character in Pandanus   and unique to subg. Vinsonia   . Furthermore, the micromorphology of the leaves is unique among Malagasy species in having stomata with ramified papillae of class VII following HUYNH (1974) ( Fig. 6C View Fig ). Its diffuse architecture with little ramification ( Fig. 3E View Fig ) is likewise unique in Madagascar described by GUILLAUMET (1973) as icon forming to Stone’s model, with lateral branches not limited in growth. 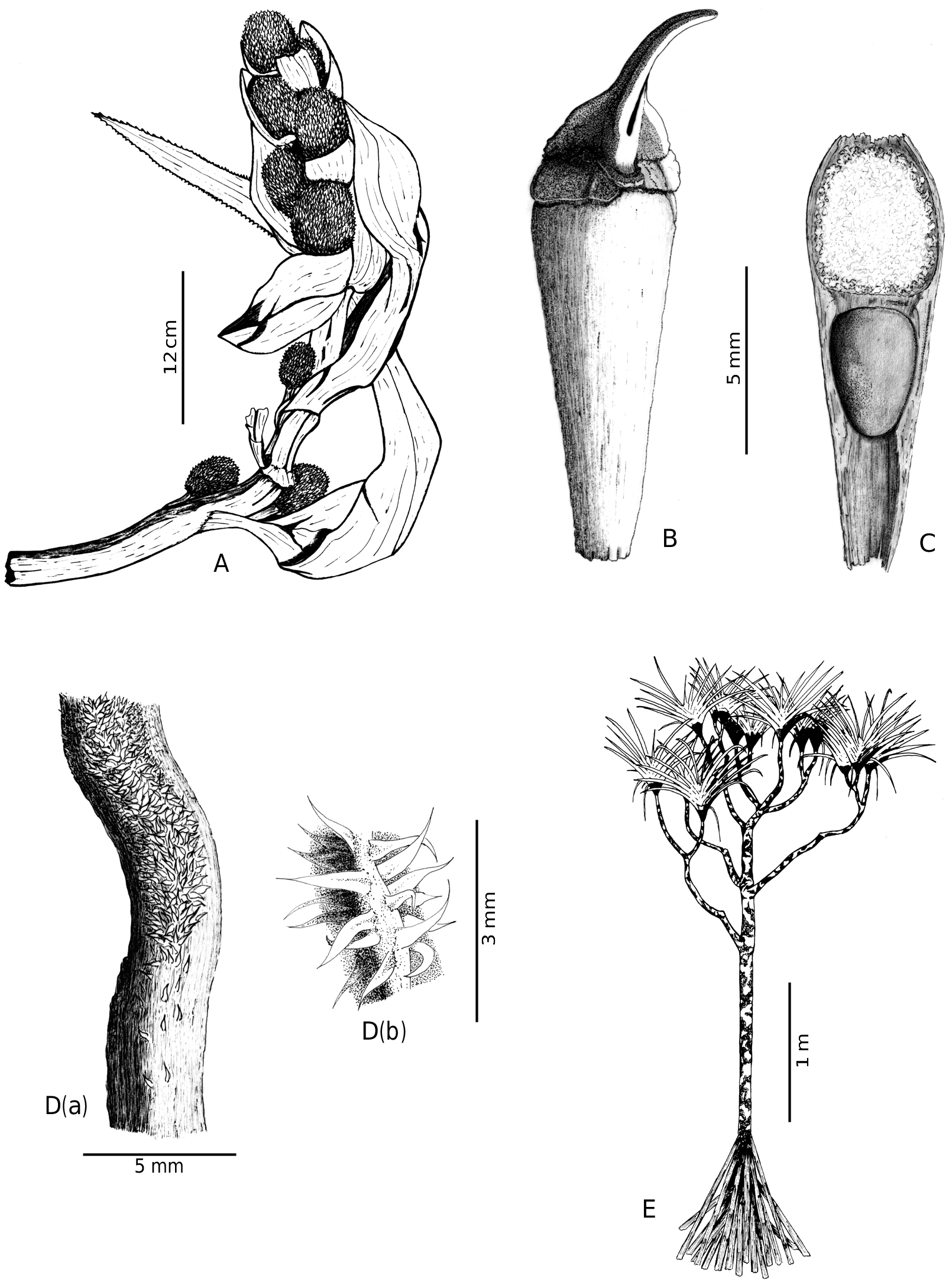 Fig. 3 — Pandanus imerinensis: A, young pistillate inflorescence; B, lateral view of drupe showing the stigma; C, longitudinal section through the centre of the stigma showing locule and fleshy upper mesocarp; D, peduncle of an infrutescence showing its hispid surface (a) with a detail of the trichomes (b); E, habit showing typical diffuse architecture. (Callmander & Bemandiny M122). — Drawn by A. MEZOUAR. 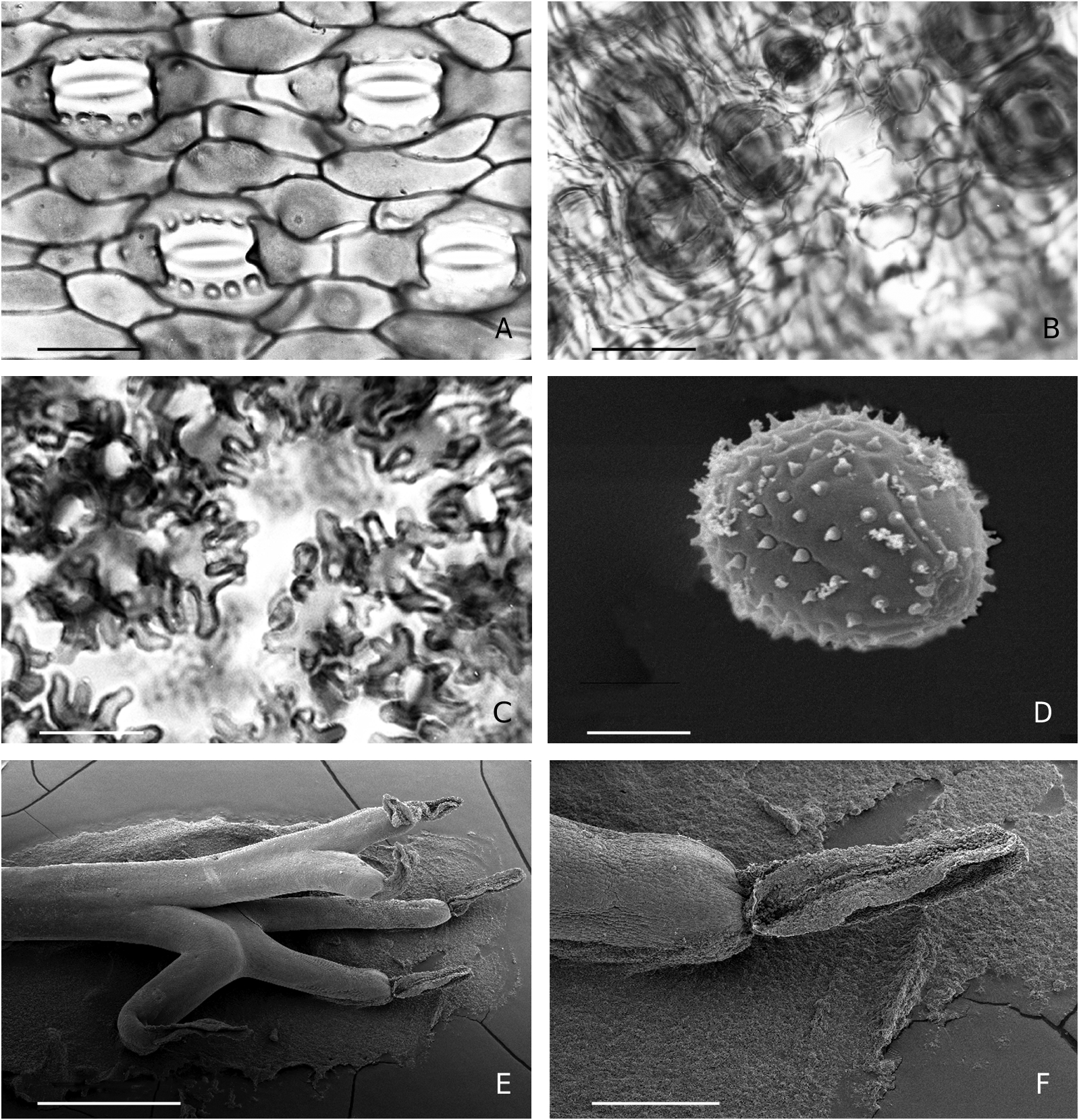