Note. This species was described on as a single specimen labeled “ Sénégal ”. Recently Senegal is located on the west of the African continent between latitudes 12° and 17°N, and longitudes 11° and 18°W, it has a short coastline on the Atlantic Ocean. Description (in part, see Dejean 1831: 599). “Length 8 points, width 3 points. Black; pronotum almost transverse, rugate; elytra ovoid, sulcated, each with two yellow maculae, almost quadrate, humeral almost transverse…” [from Latin]. “It is somewhat smaller than Panagaeus tomentosus   [= Craspedophorus angulatus (Fabricius, 1781)   ], and quite different in its shape. Head smaller, less elongated, with two longitudinal impressions near antennae, and one transversal impression behind eyes, each impression more distinct, with some points, impressed in its middle. Eyes strongly convex. Pronotum more than twice wider than the head, quite short, transverse, weakly narrowing and widely rounded anteriorly, almost flat, quite grossly and very densely punctured with merging punctuation, which seems strongly rugate; sagittal line almost indistinct; anterior margin almost flat; anterior angles strongly rounded and weakly distinct; lateral margins quite widely depressed posteriorly; hind angles very rounded; base sinuate; weakly prolonged posteriorly in the middle, with a small, quite protruded dent near each lateral margin. Elytra wider than pronotum, ovoid, less elongated than those in [C.] nobilis (Dejean, 1826)   , less convex, humeri distinctly less rounded; similarly to P. tomentosus   [= C. angulatus   ], each elytron with 9 well marked striae; but somewhat more strongly punctured; intervals slightly more convex, more densely and finely punctured; each elytron with two yellow maculae, very large, almost equal: humeral macula is almost transversal, near the base it consists of eight elongated macular spots, spots on III and V interval moved a little posteriorly than the others, which are located between I and IX stria; preapical macula near apex somewhat smaller, consists of six elongated macular spots, spot on III interval shorter towards base than the others which are located between II and VIII stria. Venter and legs black and weakly covered with setae. It was collected in Senegal and must be placed near P. tomentosus   [= C. angulatus   ]” [from French]. Chaudoir added (1879: 102) “Length 17–18.5 mm, width 8.5–9 mm. Body short and stout. Head small, not too elongated, strangulated behind eyes, eyes strongly convex and more bulging, with posterior margin almost overlaid by hind margin of the temple, perpendicularly to the neck; frons punctured, with a longitudinal impression near each margin, widely and deeply impressed, prolonged to the strangulation of the head; neck smooth as well as epistoma, which is convex. Pronotum two and a half times wider than head, very transversal, almost semicircular, anterior margin weakly sinuate, anterior angles not protruded anteriorly, adhering to the neck, quite rounded; lateral margins regularly arcuate from anterior margin posteriorly, each with a small incisure near base, hind angle with a small dent, wellmarked on its top; base straight, weakly protruded posteriorly in the middle, forming a peduncle, with a long shallow concavity near each margin, between the peduncle and the hind angle; dorsum quite convex anteriorly, with not too deep lateral depressions, each running from the anterior angle to the middle, where it disappears, with an excavation near base, close each peduncular margin, marked by a little furrow on its bottom; disc very strongly and densely punctured, covered with erected setae, quite long; sagittal line finely impressed, but distinct. Elytra flat, ovoid, quite short, about 2 mm wider than pronotum, less than a half times longer than wide, with a flat base, humeri quite widely rounded; lateral margins also rounded, mainly near humeri and at mid-length, weakly sinuate in front of apex, which is obtuse, rounded; dorsum convex, mainly posteriorly, where it descends quite rapidly to apex; striae strongly impressed and quite grossly punctured, with punctuation weakly eroding margins of intervals; these are convex, densely punctured and covered with setae as erected as on pronotum, IX interval with a rank of umbilical points, hardly reaching to mid-length; epipleura also densely punctured, as are the intervals. Venter similarly punctured as that in C. regalis (Gory, 1833)   . Black, weakly glossy, each elytron with two large fasciae; however fasciae are extended as those in C. microcephalus ( Dejean, 1831)   , their orange color is darker than in C. regalis   ; humeral fascia consists of 8 macular spots, reaching from I to IX stria, spots on VII and VIII intervals moved closer to humeri than the others; spots on III and IV intervals moved a little further from the base than contiguous spots, and spots on IV and VI intervals somewhat prolonged towards middle; posterior fascia consists of six macular spots, as elongated as these in humeral macula, macular spots on IV and VI interval slightly longer than the others, prolonged anteriorly as long as posteriorly; although the relative length of these can vary. Four specimens from different parts of Senegal, one of them is the type of Dejean ´s collection” [from French]. 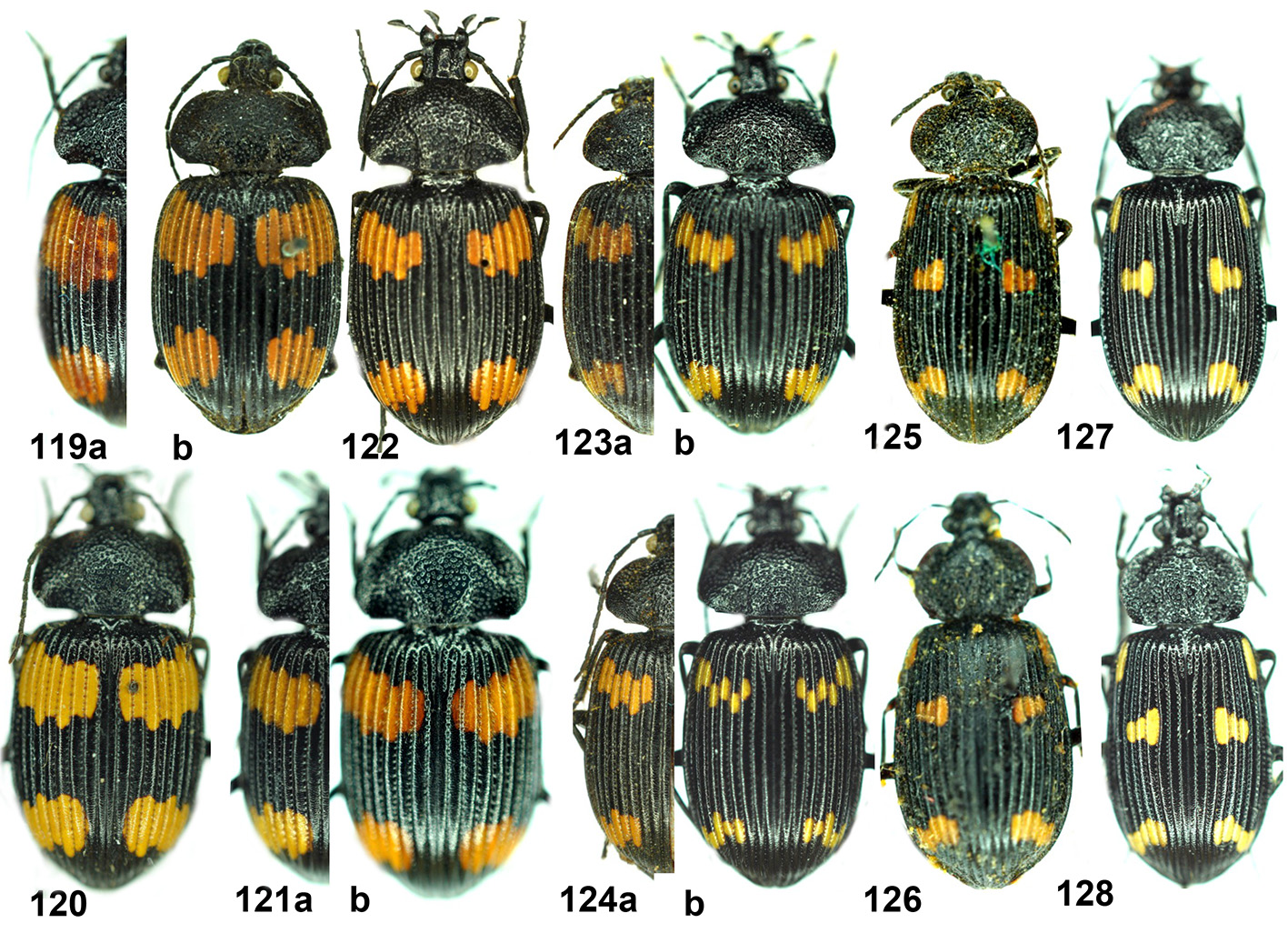