Note. This species is based on a single specimen of Hope Collection deposed in OUMNH and located by Hope to “ Sierra Leona ”. Description (in part, see Hope 1842: 94). “Length 9.5 points, width 3.5 points. Black, antennae with black setae. Pronotum almost hexagonal, anterior angles rounded, posterior abrupted and truncate, disc strongly excavated and punctured, elytra somewhat elongated, striated, punctured, with four yellow maculae, irregularly marginated, body and legs black. Hab. In Sierra Leona ” [from Latin]. “This remarkable species is named after my friend Strachan, some years a resident in the above colony... In the above species each of the four spots cover five interstitial spaces”.

Laferté-Sénectere added in his brief key to species for Isotarsus westermanni (1851: 221). “(Prémiére division): larger species. Antennae longer than midlength of the body, distal attenuated, III article twice than the second. Legs black; (aa) pronotum not convex, margins moreless elevated, (bb) transverse, not too annular, with sinuate margins, (cc) without strangulation at base (peduncle)” [from French]. Chaudoir added (1861: 340). “Specimens collected by Westermann in Guinea are deposed in Dejean´s Collection. They differ from [C.] grossus (Hope?) Murray in their head which is narrower and more punctuated, in their eyes, more convex, in their pronotum, more transverse with anterior angles less protruded, posterior angles more densely opened, and in their elytral colouration with maculae larger, also antennae and palps are darker.” [from French]. This brief description was later supplemented by Chaudoir (1879: 93). “Length 20–21 mm, width 8–9 mm. It resembles tetrastigma ( Chaudoir, 1850) , but markedly differs from it. Pronotum less narrowing towards base, with lateral margins less rounded; disc less grossly punctured, base less sinuate near each margin and peduncle, more regularly arcuate excavated, each posterior angle less indentated on its top, however similar is the marginal concavity in front of it. Elytra equally shaped [as in C. tetrastigma ], throughout also more deeply striated, but striae more finely punctured, intervals as well convex, more finely and densely punctured, covered by shorter setae. Colouration not too equal; humeral fascia more irregularly marginated, serrate, reaching from IV to VIII stria, the external interval only weakly touched, in contrary to preapical macula, with margins very serrate, which compounds of five spots between III and VIII stria, spots on V and VII intervals markedly prolonged as more anteriorly, as more posteriorly in comparison to three other spots, spot on IV interval very short. One specimen, I have, is Laferte's type [ Panagaeus westermanni ] from Dejean's collection, who placed its origin to Guinea; second specimen, although slightly larger, does not differ from the type, coming from the sellout of Edwin Brown's collection, with its origin in West Africa. The holotype of P. strachani , which I have seen in Hope's collection in Oxford, seems belonging to the same species, and if the description is not as insufficient, it must be named according to priority. Labeled Cape Palmas” [from French]. 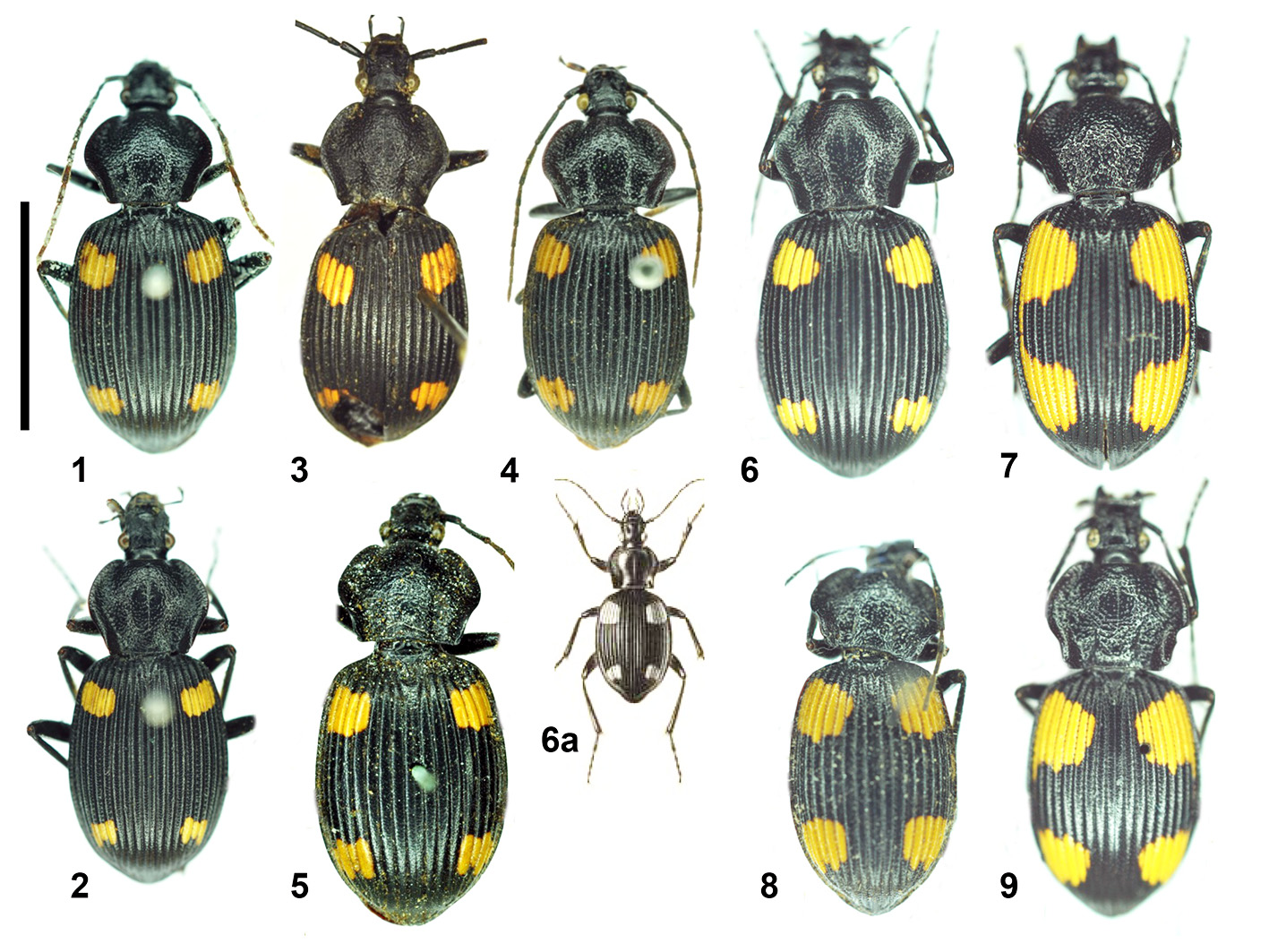