Note. This species is based on a single specimen deposed in OUMNH and labeled “Circa Palmas”. Description of Panagaeus klugii   (see Hope 1842: 94). “Length 9.25 points, width 4 points. Black, antennae with three proximal articles black, other distal articles ferruginous and covered by setae, pronotum hexagonal shaped, margins concave, excavated, disc very finely punctured. Elytra striated, with four yellow maculae, legs black. Hab. Circa Palmas…” [from Latin]. In this species the two anterior spots cover five interstitial spaces, and these are in shape nearly triangular, the base being situated nearly at the outer margin of the elytra with the apex directed towards the suture. The two posterior markings are more rounded, and cover only four interstitial spaces.”

Head long but wider than in C. strachani   , almost quadrate. Labrum and mandibles smooth, glossy, terminal labial palpomere prolonged, kidney-shaped (male). Eyes weakly convex. Frons flat, only a small protuberance behind labium weakly elevated. Surface softly, densely punctured without grooves, in front of eyes with two longitudinal depressions, lateral in the form of a thin ridge running from the clypeus to the anterior margin of eye (supra-antennary ridge) with regular soft punctuation, medial shallow, almost indistinct, softly and densely punctured as the frontal centre. Vertex almost smooth, occiput and neck smooth, without strangulation. Antennae whip-shaped, distally not widening nor flattering, reaching almost up to the half of elytral length. The basal antennomere (scapus) twice longer than the second, the third one and a half times longer than the first, the fourth one and a half times shorter than the first, surface densely covered with short setae, longer setae cumulated at the distal end of the antennomere.

Pronotum not too transverse, 1.39x wider than long, cordiform; anterior margin straight, as long as head with eyes is wide, parallel to base in its middle, straight part as long as neck is wide, laterally sharply verges to anterior angles, weakly rounded and distinctly protruded forward, lateral margins widely curved, narrowing towards base with a distinct sinuosity, maximum width behind mid-length, in front of posterior angles mild incisure, posterior angles rectangular, posteriorly weakly protruded to elytral base. Base straight at the centre, at the margins up to one fourth indistinctly angled towards elytral humeri without any peduncle. Pronotal disc convex, separated by a shallow depression from wide lateral rims which are distinct already from the anterior pronotal margin, the rim posteriorly distinctly widening, elevated upwards along the entire length, the greatest elevation in its basal fourth, then the rim flattening, thus posterior angles jutting out weakly backwards and upwards, not to the sides, without being keel-like. Disc and basal impressions grossly and irregularly punctured, less densely than front, elevated lateral pronotal margins distinctly more glabrous than disc, sparsely and softly punctured. Dorsal surface covered with long black setae ( Plate 2 View PLATE 2 , Figs 16, 17).

Differential diagnosis. According to Hope's insufficient description, the species could be synonymized with C. strachani ( Hope, 1842)   , because he only points out the different size of the elytral preapical macula. In C. klugii   the macula is reduced to four intervals, in C. strachani   in OUMNH (male) it covers five intervals ( Plate 1 View PLATE 1 , Fig. 3). In fact this variance rather answers to sex differences, because in many C. strachani   females from the type locality ( Sierra Leone) the apical macula is also reduced ( Plate 1 View PLATE 1 , Fig. 2). Basilewsky had never synonymized those two species. After having them compared to the type, he determined the recently collected specimens of the Ivory Coast population as C. klugii   . The faunistic note was published without any further commentary (1968: 93). Truth be told, some of the Ivory Coast specimens have a different elytral sculpture (the intervals are much flatter and less distinctly punctuated than in sympatrically living C. strachani   ) and also the anterior pronotal angles in those specimens ( C. klugii   ) protrude more. The colouration of the elytra is in C. klugii   slightly different than in C. strachani   , both maculas in all C. klugii   specimens are of much darker hue, the humeral macula has a different shape—it even answers to Hope's extremely brief description. The preapical macula is always limited only to four intervals ( Plate 2 View PLATE 2 , Figs.16, 17). If the C. klugii   holotype in OUMNH is male ( Plate 2 View PLATE 2 , Fig. 16), then the extent of the apical macula (four intervals) in C. klugii   is the same in both sexes. The sex can only be estimated according to the preserved labial palps, the genital has not been at my disposal, all recently collected specimens known to me are females. 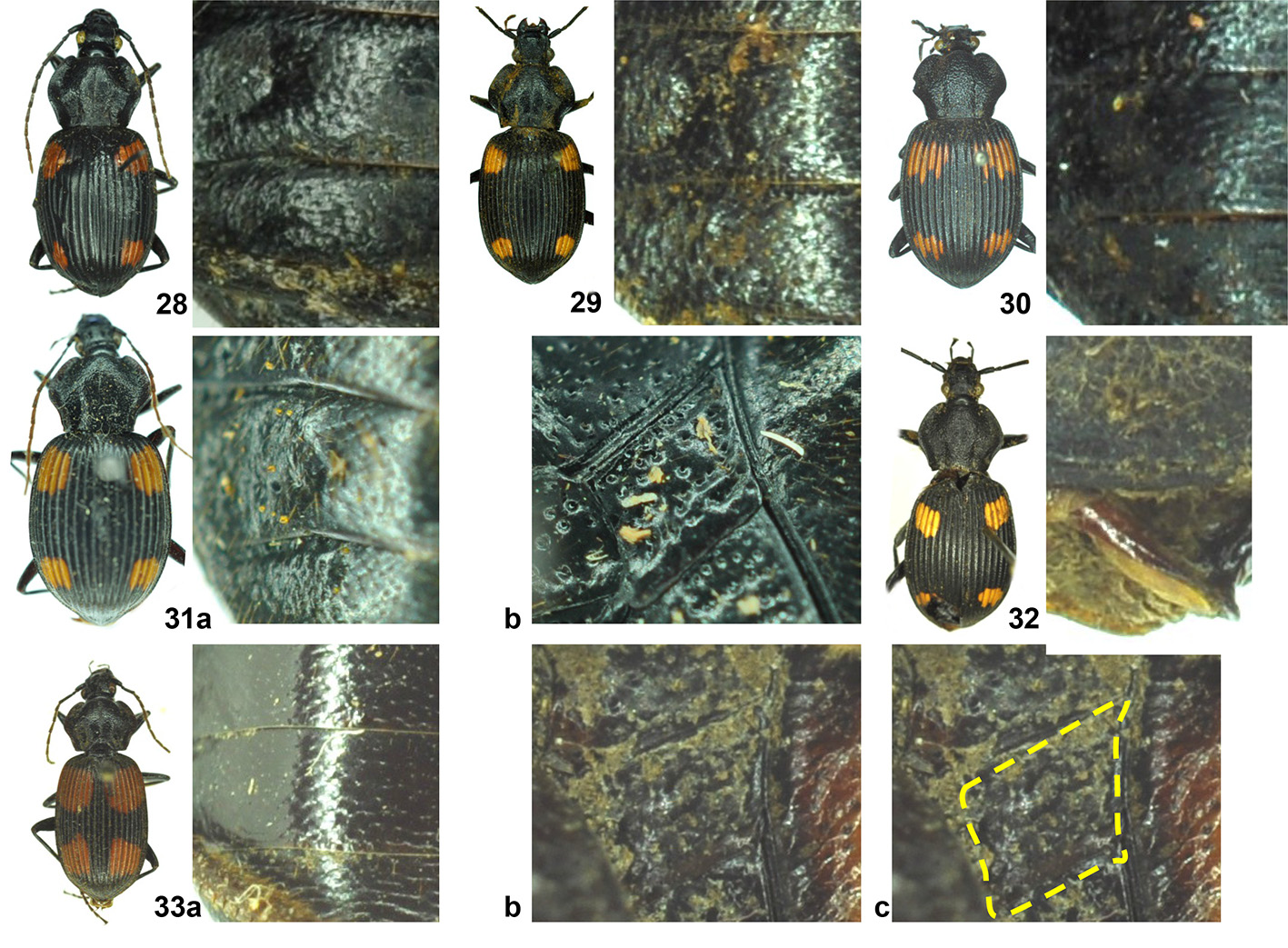