IDENTIFICATION: Glyphonycteris daviesi can be distinguished from other species of Glyphonycteris by its unicolored-brownish dorsal fur, larger size (forearm> 50 mm, greatest length of skull> 25 mm), one pair of upper incisors that are nearly the same length as the upper canines, and lower-incisor crowns that are antero-posteriorly elongated and transversely narrow (Williams and Genoways, 2008; López-Baucells et al., 2018). Descriptions and measurements of G. daviesi were provided by Hill (1965), Tuttle (1970), Swanepoel and Genoways (1979), Williams and Genoways (1980a), Brosset and Charles-Dominique (1990), Pine et al. (1996), Simmons (1996), Simmons and Voss (1998), Lim et al. (2005), and Morales-Martínez and Suárez- Castro (2014). No subspecies are currently recognized (Williams and Genoways, 2008).

Fleck et al. (2002) correctly identified the specimens from Nuevo San Juan as Glyphonycteris daviesi . Their voucher material conforms to previous descriptions of G. daviesi , with measurements that fall within the previously documented range of size variation for the species.

REMARKS: The specimens of Glyphonycteris daviesi from Nuevo San Juan were members of a single roosting group consisting of five individuals, of which one adult male, two adult females, and one juvenile female were collected on 26 October 1999. This group occupied the rotted-out central cavity of a standing tree in hillside primary forest ; no other species was found roosting with G. daviesi .

Only two roosts of Glyphonycteris daviesi have previously been described in the literature (Tuttle, 1970; Solari et al., 1999). In both cases, roosting individuals were found in hollow standing trees, which, on the basis of our additional observation from Nuevo San Juan, would appear to be the typical diurnal refuge of this infrequently collected species. 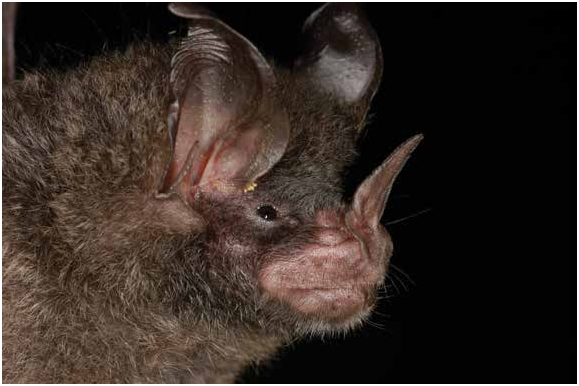