This species is most similar to the Medinilla pendula  species complex in its whorled leaves, 4-merous flowers, and pendulous inflorescences. It differs, however, in its secondary veins of leaves being distinct only on the adaxial surface, cauline or axillary inflorescences, and straight anthers.

Terrestrial, erect shrub up to 1.5 m tall. Stem 1-2 cm diameter near the base of the plant, terete, internodes to 12 cm long, shorter on the distal branches; nodes rather thickened, knobby, not setose, although small barbules may sometimes appear on younger nodes; bark generally smooth, becoming striate on older stems; young stems terete, about 3 mm in diameter, green. Leaves simple, petiolate, in whorls of 3 or 4 per node; petiole ascending, about 3-5 mm thick, 0.5-2 cm long, pale light green, sometimes with dark purplish-red or maroon tinge on the adaxial side; lamina lanceolate, 5-12 × 1.5-4 cm, glossy dark green adaxially, paler abaxially, succulent when fresh, coriaceous when dry; base obtuse, apex acuminate; 3-plinerved, the pair of secondary veins diverging about 2-5 mm from the leaf base, in fresh specimens only visible on the adaxial surface, very faintly so and only near the leaf base on the abaxial surface, in dry specimens visible only on the adaxial surface; transverse veins faintly visible on adaxial surface in fresh and dry specimens, indistinct or absent abaxially; margins smooth, revolute at the edges. Inflorescences cauline, not terminal, arising from leafless nodes, sometimes near the base of the stem, or from leafy nodes, pendulous, usually solitary, or sometimes two or three per node; peduncle about 2.5-6 cm long, enlarged towards the distal end, bright red at maturity, bracteate, each bract 4 × 3 mm; flowers up to 15 or more per inflorescence, usually clustered in a whorl of short, 3-flowered cymes only at the enlarged, distal end of the peduncle, sometimes in 2-3 whorls; 10 or so arranged in umbellately cymose clustered branches up to about 1 cm long, also subtended by bracts; secondary bracts spatulate, 3 × 2 mm; total inflorescence length about 7 cm. Flower buds ± rounded at the tips, the petals imbricate. Flowers 4-merous, petal 8 × 4 mm, oblique-oblong, often reflexed, orange-red, red, or pink; stamens 8, usually positioned above the style, anthers linear-lanceolate, 2.5-4 mm long, rather straight, purple, with a yellow dorsal spur of 0.6 mm long on the connective and a pair of partly joined stout, ventral appendages at the base of the anther sac; filament 4 mm long, pale white; style terete, 10 mm long, pale white; hypanthium campanulate, the rim generally truncate or sometimes very shallowly lobed, pale or light green, 3-4 × 3-4 mm; pedicel pale pink or red, about 7 mm long. Fruit a subglobose berry, 4-6 × 5-7 mm, light green when young and with bright red calyx rim, entirely purplish-black when ripe; the peduncle and pedicels red. Seeds numerous, embedded in pulpy tissue, ovoid, 1-1.5 × 0.5-1 mm, chestnut brown. Seedling with epigeal germination, phanerocotylar, cotyledons foliaceus, 2-3 × 2 mm, broadly ovate, apex rounded or obtuse, sometimes shallowly emarginate; eophylls simple, opposite, broadly elliptic-ovate to orbicular, 3-7 × 3-5 mm.

Some photos of Leonard L. Co from Mt Hamiguitan taken in January 2005 and appearing in PhytoImages (www.phytoimages.siu.edu) with five of these identified as Medinilla surigaoensis  (DOL nos. 27282-27284, 27439, and 27534) and several others as Medinilla  sp. (DOL nos. 27278-27281 and 27533) ( Pelser et al. 2011) belong to this new species. Unfortunately, we have been unable to find at PUH, where Mr Co was based, the specimens or his field notes associated with the photos. The vouchers are likely among approximately 6,000 unprocessed specimens still wrapped in about 200 plastic bags.

This beautiful new species is named in honor of Dr Theresa Mundita S. Lim, former Director of the Biodiversity Management Bureau, Department of Environment and Natural Resources of the Philippines, and now Executive Director of the ASEAN Centre for Biodiversity, whose dedication and commitment to protecting Philippine biodiversity is admirable. Director Lim has also been active in the international biodiversity conservation sector.

The cauline and many-flowered inflorescences also puts this new species in Regalado’s (1995) Group 5 where it is most similar to Medinilla aurantiflora  Elmer (1911) from Negros, Panay, and Sibuyan Islands in its erect habit and 4-merous flowers, but our new species is distinguishable by its ternate to quaternate smaller leaves, shorter hypanthia, and straight anthers. The combination of terrestrial erect habit and cauline, many-flowered inflorescences is also known in Medinilla lagunae  S.Vidal and in Medinilla philippensis  (Cham. & Schtdl.) Merr., the latter was synonymized by Regalado (1995) under Medinilla venosa  (Blume) Blume but recommended by Quakenbush (2016) to be reinstated as a distinct species. In all these species, the leaves are 7-11-plinerved, while in Medinilla theresae  they are 3-plinerved. Elsewhere in Southeast Asia, the terrestrial erect habit and cauline, many-flowered inflorescences is also known in Medinilla tapete-magicum  Cámara-Leret & Veldk. ( Cámara-Leret and Veldkamp 2011) from Sulawesi. However, in this species the flowers are 5-merous and borne on very compact inflorescences arising from the stem at or near ground level forming a dense mat around the base of the plant.

Two other species of Medinilla  also grow in the Mt Redondo area of Dinagat Island ( Fernando et al. 2017). At about the same elevation as the new species described here is one referable to Medinilla myrtiformis  (Naudin) Triana, an epiphytic shrub with prominently divaricate branches and opposite leaves, widespread in most upper montane rain forests in the Philippines and is also known from Sulawesi and Moluccas ( Regalado 1995). On the lower slopes of the mountain at 300-650 m elevation is the scandent Medinilla quadrifolia  (Blume) Blume, regarded as a widespread and highly variable, polymorphic species ( Regalado 1995).

In the Surigao del Norte area, at low elevations (c. 150 m), also on ultramafic soils, ternate to quaternate and 3-plinerved leaves are also known in Medinilla surigaoensis  Regalado, a species belonging to Group 6 ( Regalado 1995). However, this species is an epiphytic scandent shrub and has generally smaller leaves that are ovate to elliptic-obovate and with secondary veins distinct on both surfaces of the lamina, sulcate branchlets, and the fruits have prominent outgrowths or protuberances on the surface. It is uncertain if this species is an ultramafic endemic as Regalado (1995) also recorded it from Luzon and Polillo Islands.

Medinilla palawanensis  Regalado was earlier described as an edaphic endemic on ultramafic rock slopes on Mt Beaufort near Puerto Princesa in Palawan ( Regalado 1995). However, since then this epiphytic shrub has been found on nearby Mt Cleopatra, not an ultramafic site (J.P. Quakenbush, personal observation). Medinilla capitata  Merr. and Medinilla ferruginea  Merr. were both originally described from ultramafic soils at low elevations on Dinagat Island ( Merrill 1920). M. capitata  has now also been recorded from likely an ultramafic site in Samar ( Pelser et al. 2011) and there are additional herbarium records in PNH. Similarly, for M. ferruginea  there are specimens at PUH (from Surigao, Mindanao) and MICH (from Camarines, Luzon), as well as, records from Pelser et al. (2011) in southern Samar that may possibly correlate with ultramafic soils. Further field work in these sites is needed to confirm the restriction of these two species to such edaphic conditions. M. gitingensis  , although presently treated as M. pendula  , was only known from an ultramafic location. No Philippine species of Medinilla  are otherwise known by us to be endemic to ultramafic soils.

Medinilla theresae  is an edaphic-endemic, thus far restricted to forests on ultramafic soils at elevations of c. 700-1326 m. The species is known only from two locations, Mt Redondo and Mt Hamiguitan, over 400 km apart. Using the online GeoCAT conservation assessment tool (http://geocat.kew.org/) with the default 2 × 2 km grid calculated an EOO (extent of occurrence) of more than 100 km2 but less than 5,000 km2 and AOO (area of occupancy) of 16 km2 which are thresholds for the Endangered category ( IUCN 2012). Following IUCN (2012) and the Guidelines for Using the IUCN Red List Categories and Criteria ( IUCN Standards and Petitions Subcommittee 2017), we regard this species as Endangered [EN B1+2ab(ii,iii,v)]. In both the two currently known locations of this species a continuing decline is inferred in area of occupancy, the area, extent and/or quality of habitat, and number of mature individuals. On Mt Redondo, the dwarf forest is within a mineral reservation that was previously subject to open pit mining for the heavy metal chromium. If mining is allowed to continue here, the species will be at high risk. Mt Hamiguitan, on the other hand, is a declared protected area, formally known as the Mt Hamiguitan Range Wildlife Sanctuary (MHRWS) and is a UNESCO World Heritage Site which may provide the species with some protection. MHRWS is popular site for nature trekking enthusiasts, but some hiking trails lead through the pygmy forest where this species occurs. 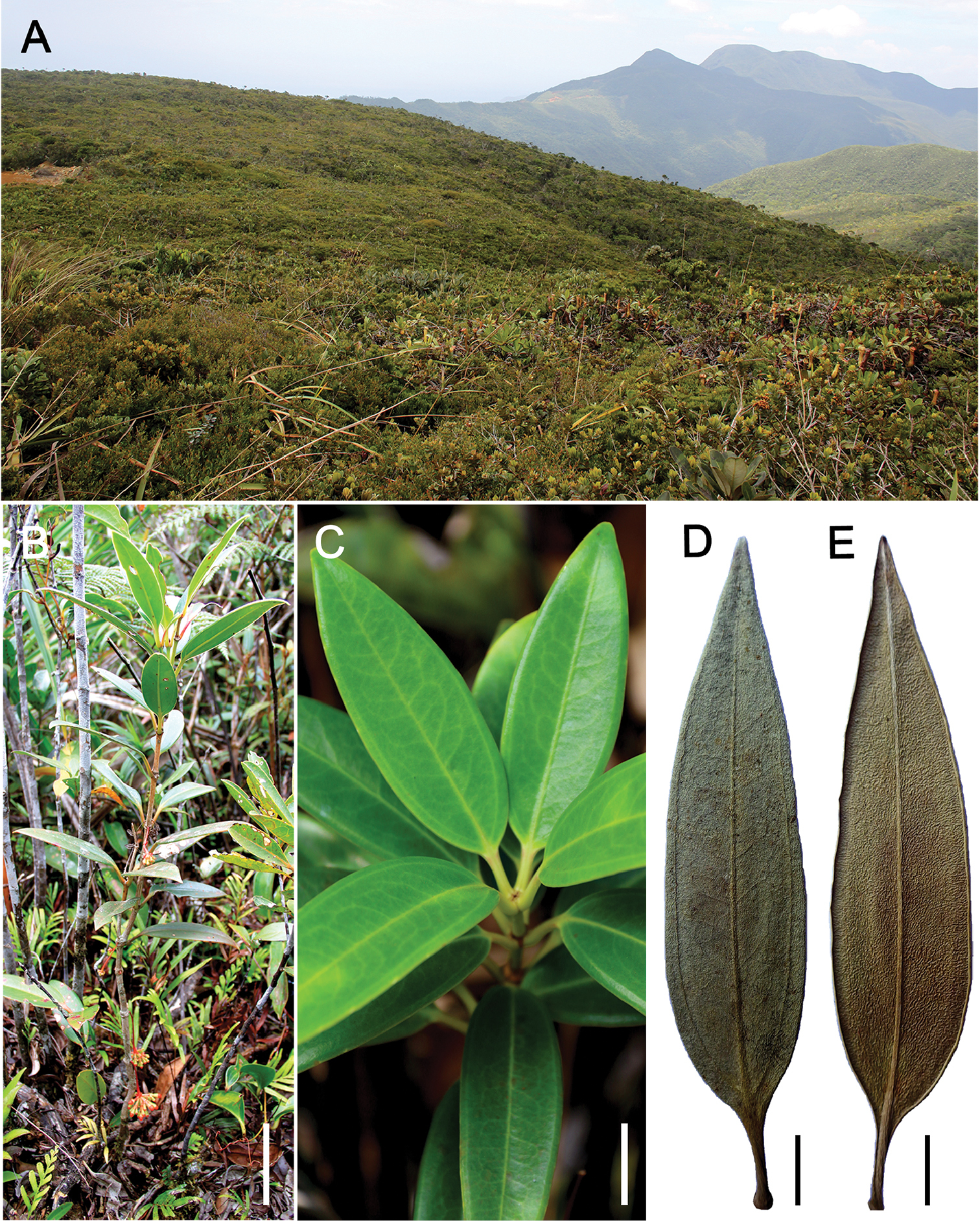 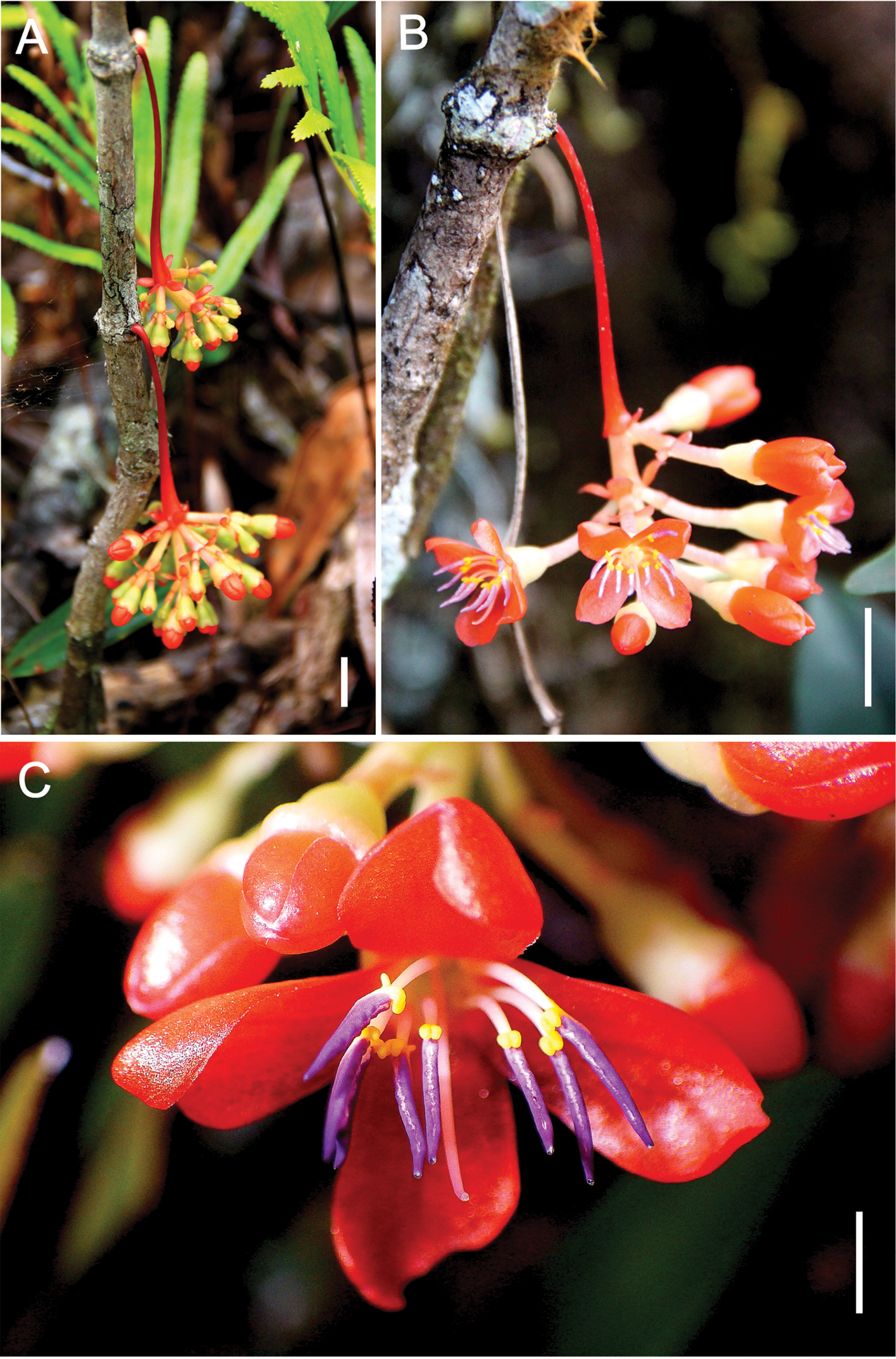 Figure 2. Medinilla theresae Fernando A Pendulous inflorescences arising from nodes near base of main stem and showing flower buds with rounded tips B Inflorescence with buds and open flowers C Close up of open flower. A from Fernando 4166 (LBC) B, C from Fernando 3831 (LBC). Scale bars: 1 cm (A); 8 mm (B); 2 mm (C). All photos by Edwino S. Fernando. 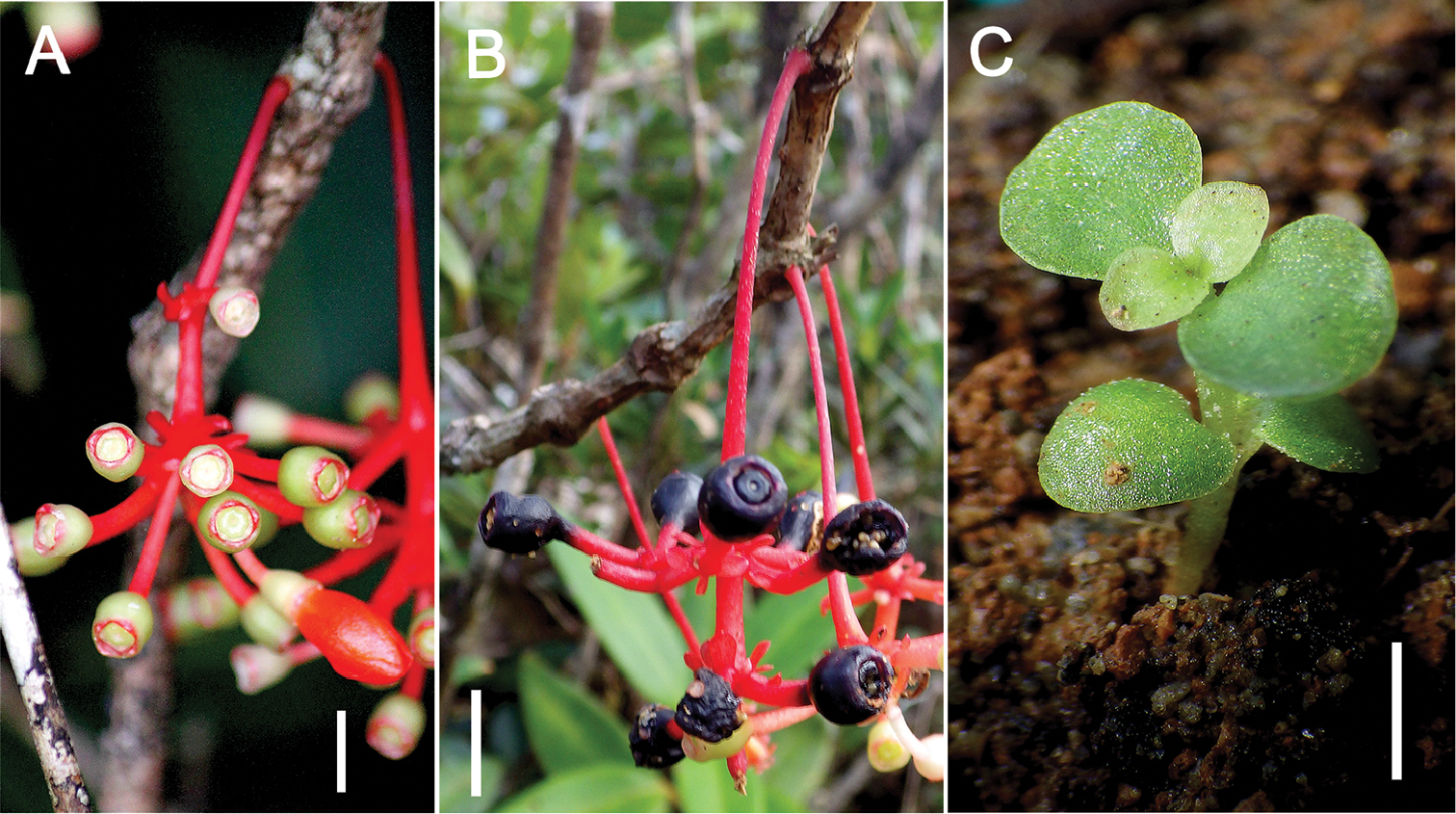 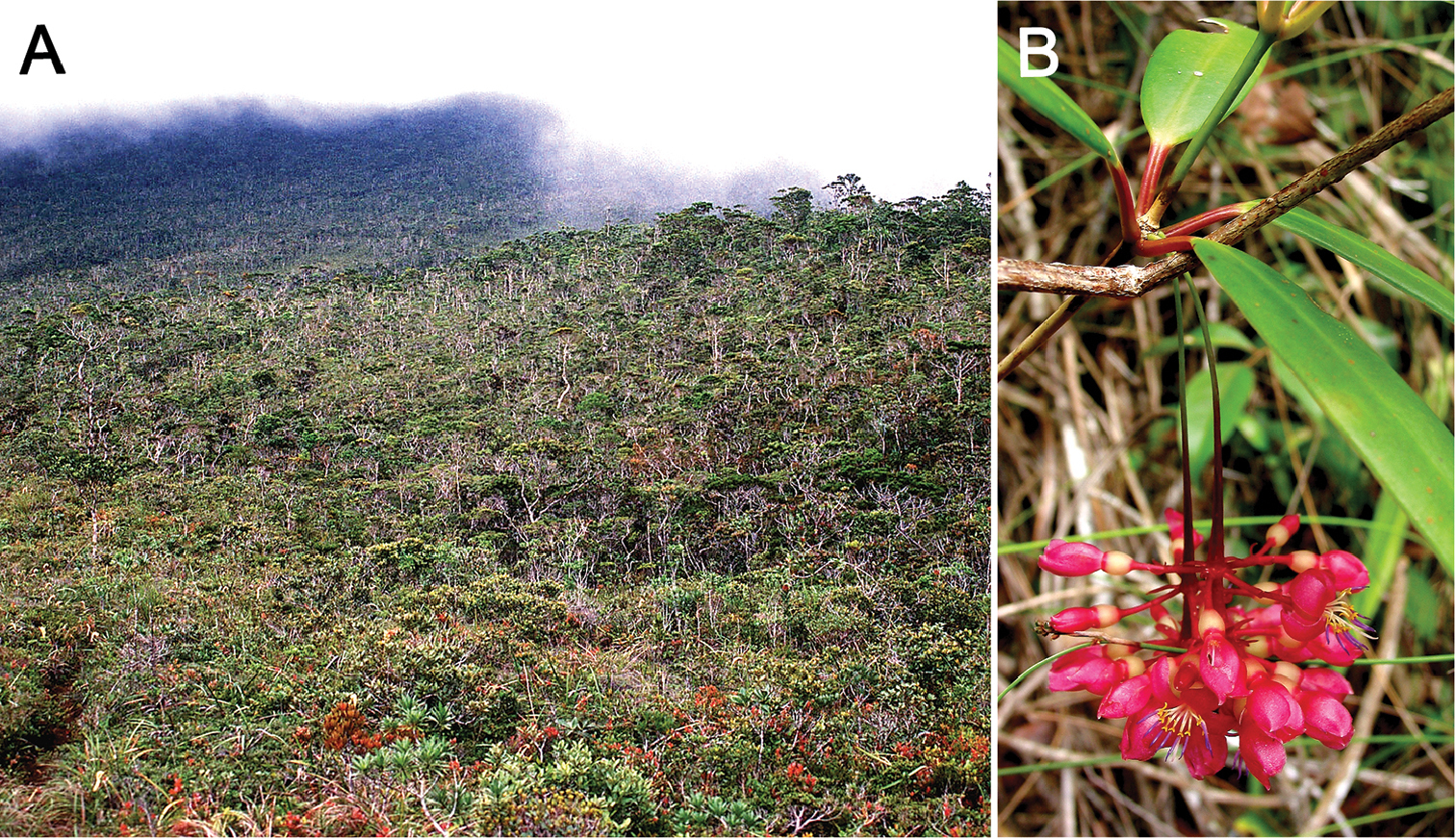 Figure 4. Medinilla theresae Fernando A Habitat on Mt Hamiguitan, forest on ultramafic soils, c. 1200 m elevation B Plant on Mt Hamiguitan with branch showing node with four leaves in a whorl and a pair of pendulous inflorescences. A photo by Edwino S. Fernando B photo by Leonard L. Co.