Callmander, Martin W. & Phillipson, Peter B., 2021, Towards a Revision of the Genus Vitex (Lamiaceae) in Madagascar. II: Three New Species from the Littoral Forests, Novon: A Journal for Botanical Nomenclature 29, pp. 38-47: 44-46

Diagnosis. Vitex zigzag Callm. & Phillipson   differs from its congeners in Madagascar by the combination of its abaxial leaf surface covered by a very fine beige velutinous indument, its divaricating, 3- to 5-times branching dichasial inflorescence with a zigzag pattern with the terminal flower often missing, and its pale yellow corolla that is sericeous outside.

Etymology. Vitex zigzag   is named after the characteristic divaricate “zigzag” branching pattern of its inflorescences.

Distribution and ecology. Vitex zigzag   is known only from two small patches of littoral forest in the SAVA Region of northeastern Madagascar from sea level to ca. 50 m. s.m. Two collections (Miller 4267 and Service Forestier 27708) probably represent a single subpopulation from “Ampandrozonana” south of Sambava adjacent to Sambava airport, probably in a small fragment of secondary peri-urban littoral forest. This remnant of coastal sand forest was dominated in 1989 by Afzelia Sm.   ( Fabaceae   ) and Barringtonia J. R. Forst. & G. Forst.   ( Lecythidaceae   ), and the understory had mostly been cut and planted with vanilla (Miller 4267); but recent satellite imagery shows this area to have no signs of any remaining forest. The new species is most likely to have been extirpated from this location during the past 30 years. The second subpopulation is represented by four relatively recent collections from Ambondrobe Forest, situated ca. 60 km to the north of the first subpopulation and some 40 km south of Vohemar, where it was collected during Missouri Botanical Garden’s littoral forest inventory project ( Consiglio, 2006). This site, a narrow, isolated strip of unprotected littoral forest on sand approximately 9 km 2 in surface area, is believed to be still largely intact.

Conservation status. As stated above, Vitex zigzag   probably only survives at a single site, Ambondrobe Forest, between the cities of Vohemar and Sambava. It is likely to have been present in other littoral forests in this area, such as around Sambava where it was previously recorded, but the demand for land for cultivation, notably for vanilla plantations, and for habitation has destroyed almost all littoral forests in this area of Madagascar. While Ambondrobe remains relatively intact, it is believed to have once been part of a much larger area of forest which has now been destroyed ( Consiglio, 2006), and it is likely only a matter of time before pressure on the remaining area causes loss of viable habitat and eventually destruction of the forest unless adequate conservation measures can be put in place.

The extent of occurrence ( EOO) and the area of occupancy ( AOO) of Vitex zigzag   are both less than 10 km 2, and the range consists of a single known extant location. Continuing decline has been observed and can be inferred, and is also projected in terms of the species’ extent of occurrence, area of occupancy, and quality of habitat. We therefore assign a status of “Critically Endangered” [ CR B 1ab(iii)+ B 2ab(iii)] using the IUCN Red List Categories and Criteria ( IUCN, 2012).

Notes. Vitex zigzag   is very distinctive among the Malagasy Vitex species   and can be easily characterized by its divaricating, 3- to 5-times zigzag branching inflorescence.

Vitex zigzag   is a rare and threatened species, and although it is adequately represented by herbarium specimens, a search for the species in any sites containing remnant littoral forest species between Vohemar and Sambava, even extending south from Sambava as far as the Lokoho River mouth, may reveal other sites at which it occurs. However, apart from the Makirovana Tsihomanaomby Reserve, which is the nearest protected area to the area of occupancy of V. zigzag   , but which lies ca. 10–30 km inland, this zone lacks any protected areas. We judge this to be a significant shortcoming to the existing protected area network. 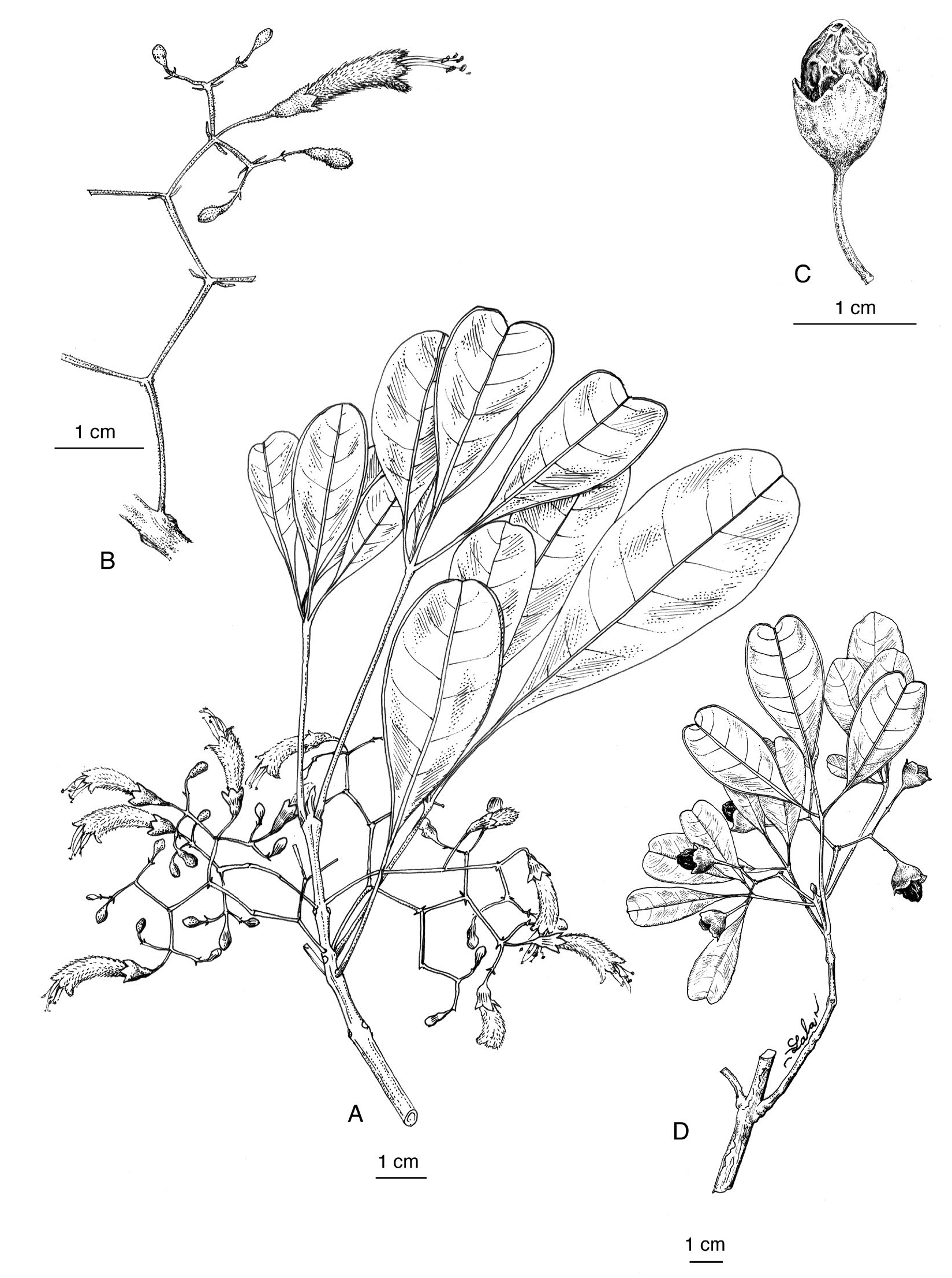