Specimens with flowers have been collected in March, from May to July, and in September and October, and with fruits from January to March, and in June and October. A ten-year phenology dataset from 1948-1957 from the Luki Reserve in southwestern Democratic Republic of Congo was analyzed by Couralet (2010), who found that X. wilwerthii in the Reserve consistently flowered with the beginning of the rainy season from January to March, with fruit production following shortly thereafter and seed dispersal extending into the dry season from June to September.

(Fig. 32 View Figure 32 ). Occurs in and near the lower Congo River drainage in the southern Republic of the Congo, western Democratic Republic of Congo, and the Cabinda Province of Angola, where it grows in lowland forest, gallery forest, and forest/savanna edges at elevations of 400-500 m.

The long pedicel of Xylopia wilwerthii is unique among African species and unusual within the genus worldwide. This, along with the glabrous caudate leaves, reliably distinguish the species. An unusual aspect of its floral development is that elongation of the axillary pedicel seems to precede elongation of the terminal shoot from which it arises. The orange sarcotesta of its seeds suggest its placement within the X. odoratissima group, but it is isolated there.

Xylopia wilwerthii var. cuneata was distinguished by the leaves being more narrowly cuneate at the bases than in the type specimen of the nominate variety, but we have now seen specimens where this range of variation in the leaf base is encompassed by a single specimen, and the two specimens do not show any other differences, so we do not distinguish them taxonomically. More perplexing is the variation in size and shape of the monocarps; monocarps with larger numbers of seeds are more slender and torulose than those with only 1-3 seeds, which tend to be wider and less strongly constricted between the seeds.

Couralet (2010) reported X. wilwerthii , along with Aidia ochroleuca and Corynanthe paniculata , to be a dominant understory species in the Luki Reserve forests, which were characterized as tropical semi-evergreen forest with Prioria balsamifera and Terminalia superba as important canopy species. Forest of Marquesia acuminata was mentioned as the habitat at another site. We calculated a relatively large EOO for X. wilwerthii of 179,602 km 2, coupled with an AOO of only 52 km 2. The size of the EOO is largely due to the great distance of the type locality, Upoto in the Democratic Republic of the Congo, from the remainder of localities where the plant has been collected.

Plants of this group vary in habit from shrubs to canopy-sized trees or rarely lianas. The leaves of several species, for example X. cupularis , X. hypolampra , and X. villosa , have a fine shiny appressed indument abaxially, a character not seen elsewhere among African species. The inflorescences may consist of a single flower, as in X. acutiflora , or, in the case of X. paniculata , up to 32 flowers, and pedunculate inflorescences are common. Monocarps of many species have a thick woody or leathery pericarp and seeds lying in two rows and oriented more or less perpendicular to the long axis of the monocarp. The sarcotesta of most species in this group is pale green, gray, or blue; X. phloiodora has an orange sarcotesta, and sarcotesta color is unknown for X. acutiflora , X. calva , X. dinklagei , X. elliotii , and X. talbotii . Four species within the X. acutiflora group were included in the molecular phylogenetic analysis of the genus by Stull et al. (2017), and all fell within a strongly supported clade along with several Madagascar species. In Africa this species group has a Guineo-Congolian distribution, reaching its eastern limits in South Sudan, western Tanzania, and central Angola. 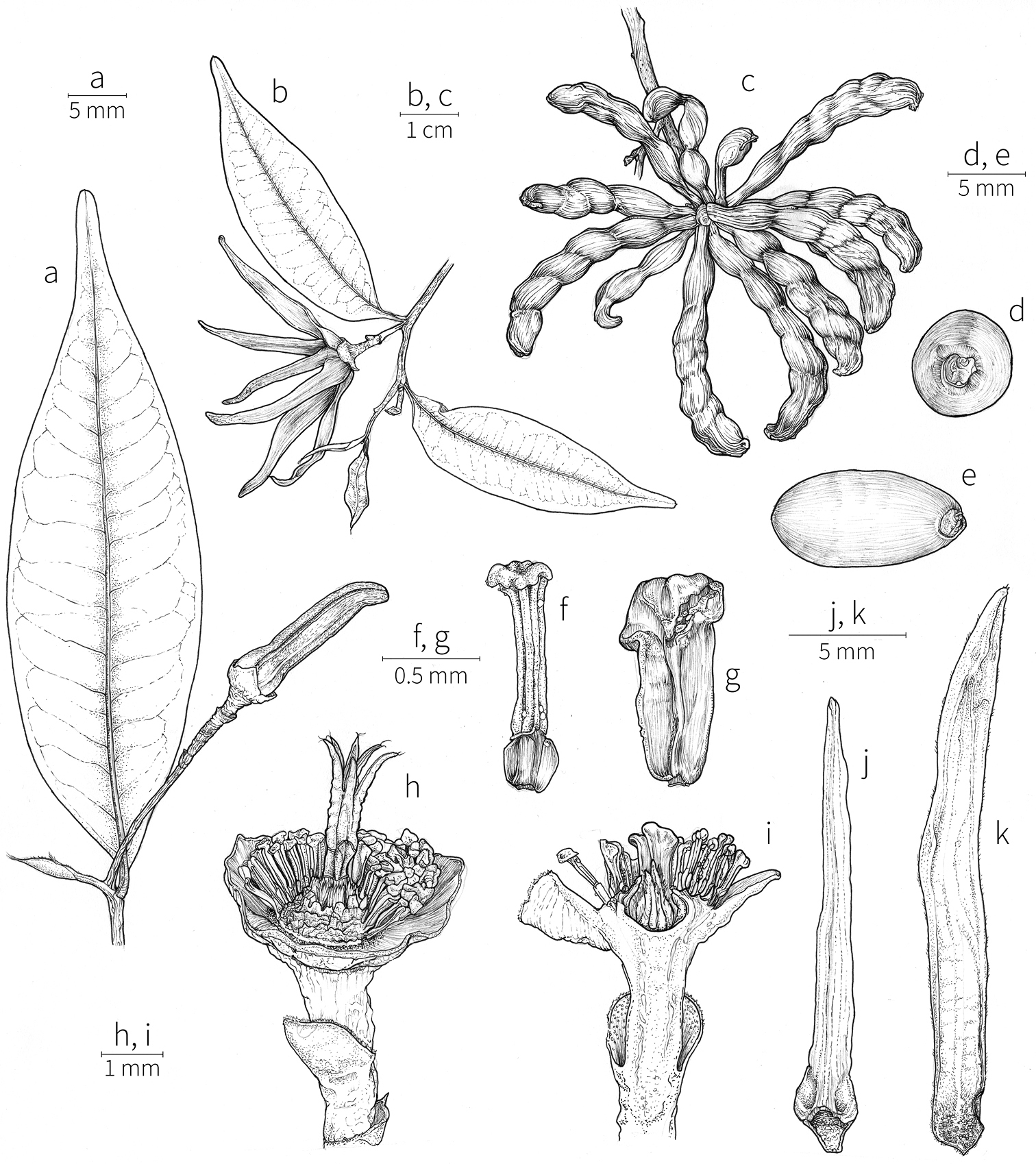 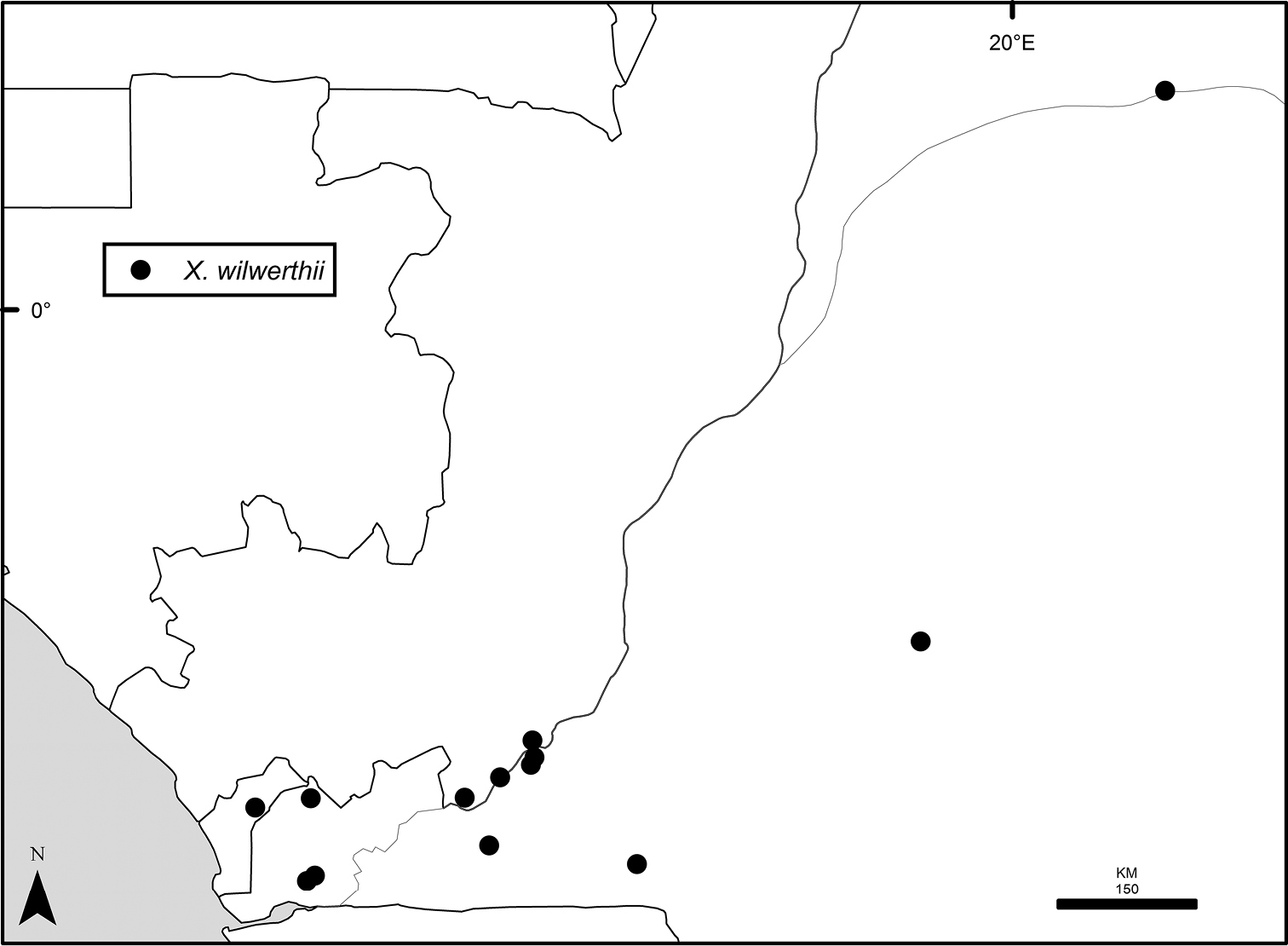