In this paper, 12 species, excluding five known Oriental species, are recorded from Thailand for the first time, of which 10 are new to science. Most of the flies described and discussed below belong to a group of shining coppery-greenish, black species that occur throughout the Old World tropics. Only six species, M. ancyla  sp. nov., M. gressitti Sasakawa, M.  lunulata sp. nov., M. pandiculata  sp. nov., M. provecta (Meijere)  , and M. yodai Sasakawa  , lack the coppery-greenish sheen on the mesoscutum and abdomen. The color of the fringe on the calypter, which is either white to yellowish-white or brown to black, is an essential differentiating character among the species. The pale fringe is seen in most of the Thailand species, and only seven species have a dark fringe: M. ancyla  sp. nov., M. catalexis  sp. nov., M. gressitti  , M. lunulata  sp. nov., M. malayensis Sasakawa, M.  pandiculata sp. nov., and M. provecta  . The males of some species with a pale fringe can be further characterized by eyes that are whitish-pilose on the anterodorsal area.

This is the dominant genus in Thailand as well as in other Oriental countries. It is also notable that 16 species of 25 known species are treated here as endemic, although some of them will likely be found in other Oriental- Oceanian countries in due course.

Special attention should be drawn to both thoracic coloration and male genitalic features in the following species. Firstly, three of the new species, M. catalexis  ( Fig. 10View FIGURES 9 – 18), lunulata  ( Fig. 16View FIGURES 9 – 18) and pandiculata  ( Fig. 30View FIGURES 30 – 36), have a distinct phallus with a membranous swelling on ventral side. It indicates a close relationship with the following species: Palaearctic, Oriental, Afrotropical M. pubescens Hendel  (1923; Sasakawa 1996: fig. 2), Australian M. anceps Spencer  (1977 b: figs 5, 6), M. avicenniae Spencer  (1977 b: figs 10, 11) and M. variegata Spencer  (1977 b: figs 68, 69), Neotropical M. flexuosa Sasakawa  (1992: fig. 7), and Afrotropical M. pubescentis Spencer  (1959; 1964: fig. 26) and M. luthulii Spencer  (1964: fig. 23), and Afrotropical-Oriental M. provecta  (Meijere, 1910; Spencer 1985: fig. 20). These species are easily recognized externally by the matt or shining black mesoscutum without a metallic-coppery or metallic-greenish luster, and the black fringe on the calypter. Secondarily, the basal apodeme of the hypandrium is flattened vertically (Sasakawa 1996: fig. 2; Spencer 1964: fig. 23). Thirdly, the basiphallus is divided distinctly into two forms: short tubiform in catalexis  and luthulii  , and U-shaped with sidearm variable in length and shape in other many species. These phallic characters are probably apomorphic. 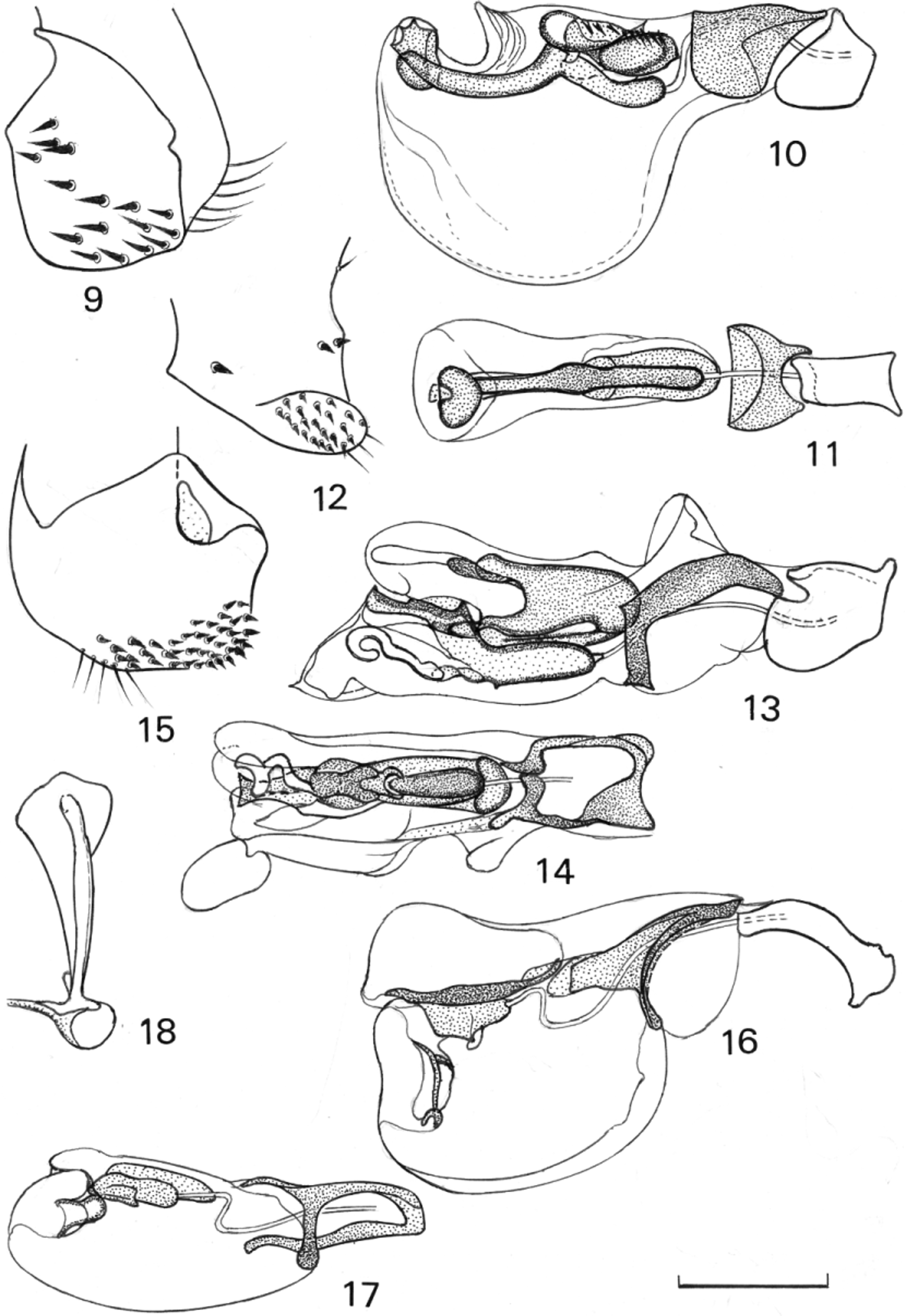 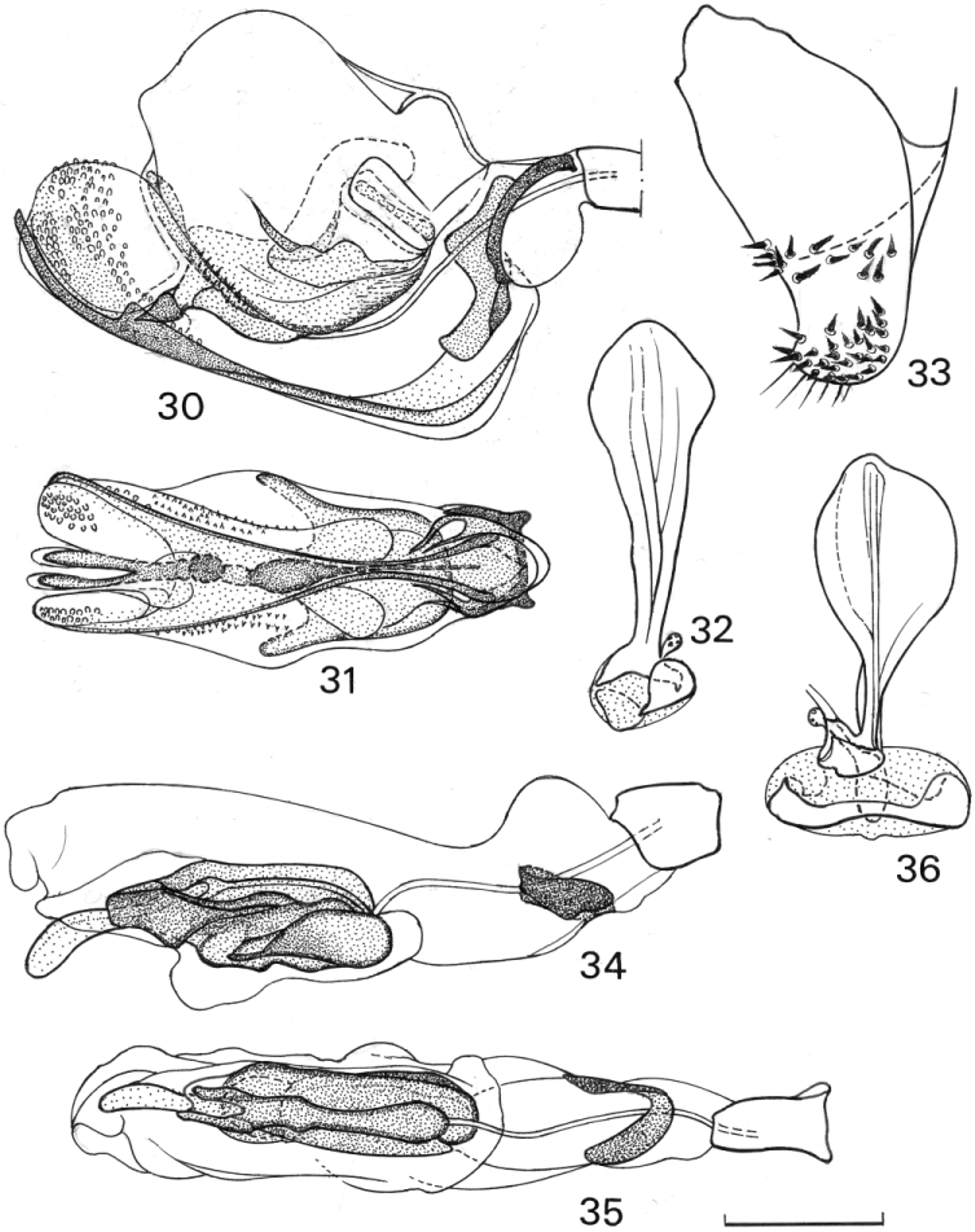