Distribution, ecology and conservation status. – Homalium nudiflorum   as circumscribed herein is a very widespread, though scattered species in eastern forests. It usually occurs in mid-elevation humid forests up to 1220 m, but is occasionally found near sea level. Reported substrates are lateritic soils, including ferruginous crust and cuirasse, volcanic soil, and gneiss or granite. It occurs in several protected areas, including Galoko, Manombo, Mantadia, Midongy du Sud, Montagne d’Ambre, and Zahamena. Its conservation status is estimated as “Least Concern” [LC]. However, it should be noted that regional variants of the species may be genetically distinct and at greater risk.

Notes. – Homalium nudiflorum   as defined by SLEUMER (1973) was much too broadly circumscribed, including in a single species with one variety all   of sect. Nisa   that was not obviously excluded by having greatly different perianth morphology ( H. louvelianum   ), stipule morphology ( H. intermedium   ), or sepal gland and foliar indument ( H. stelliferum   ). In this treatment, eight species are recognized within what was formerly the H. nudiflorum   complex. Homalium nudiflorum   as herein defined is much less heterogeneous, but remains a widespread and morphologically variable taxon. Variation in morphology is probably geographically correlated, but since most parts of the range are represented by few individuals, it is impossible to determine how consistently so.

Most conspicuously, most collections from the far north (DIANA and SAVA) have broadly elliptical leaves (providing the upper extreme of the size range) with usually rounded bases, a glaucous upper surface, and often shallowly repand rather than entire margins. Additionally, these collections have moderate (to dense) indument on the apical half of the petals, while material from other parts of the country usually has trichomes only at the extreme petal apices. These populations might merit recognition as a species. However, most of their distinctive characters may be found individually in specimens from other regions (e.g., there are southern collections with large, broad-based, broadly elliptical leaves or with heavy petal indument) and there are both typical northern collections and potential intermediates. Because hybridization between H. nudiflorum   and H. confertum   is suspected to occur primarily in the north (see below), it is also possible that some characters of these specimens are attributable to gene flow or incomplete separation from H. confertum   .

SLEUMER (1973: 299) stated that Petit Thouars   s.n. “P & P-Juss 14 411” was the “ holotype ” of Homalium nudiflorum   , and that no duplicate was found at G-DC, where material possessed by De Candolle might have been expected to be located. Two sheets of Petit Thouars   s.n. were located at P, both of which were labeled “ holotype ” by Sleumer; these should be considered syntypes. Both are of poor quality, but the sheet barcoded [P00418086] includes a fragment packet containing flowers of H. nudiflorum   along with mounted material that appears to be H. louvelianum   . Therefore, [P00418087] is chosen as lectotype. The type collection has narrowly elliptic to obovate or narrowly obovate leaves (some fairly large, though not broad for their size), a glabrous rachis, bracts (except for cilia) and calyx, and sparsely pubescent petals. Without locality data, it is not possible to identify this as pertaining to any specific geographic variant of H. nudiflorum   , which favors the maintenance of a relatively broad species concept for pragmatic reasons, while excluding several segregate taxa that are clearly not conspecific with the type.

Several specimens (see below) are observed that have the fairly small leaves and most other features of Homalium nudiflorum   s.str. combined with features of H. confertum   , in particular dense indument on most, or sometimes all, of both petal surfaces. A few have variable leaf morphology with some leaves being crenulate or dentate-crenulate, with some elongated glands. A few other specimens with atypical morphology are herein treated as H. nudiflorum   . All of the putative intermediates come from regions where both H. nudiflorum   and H. confertum   are found. Hybridization is observed in other sections of Homalium   ( APPLEQUIST 2016a, 2018b). Hybridization or gene flow between these species, which are probably closely related, is suggested to be responsible for the features of these specimens. One or two specimens, e.g., Service Forestier 23750 with very small anthers and short filaments and styles, might be suspected of other hybrid ancestry, but their morphology is otherwise consistent with H. nudiflorum   .

Service Forestier 18334 has leaves similar to those of one form of H. nudiflorum   (except that the adaxial surface is glaucous) but relatively gigantic flowers, with sepals reaching 20 mm in fruit. No other material of this section has flowers of similar size. As three characters to distinguish it from H. nudiflorum   , as herein circumscribed, are not seen, it is tentatively placed in that species. However, further collections of this population would be highly desirable.

Baron 6251 is a specimen in poor condition with a few small flowers and a few elliptical to ovate leaves, one of them very large. Though leaf shape is quite variable in this species complex, ovate leaves are normally not seen. This may represent a hybrid with a larger-leaved species, possibly of another section, or a distinct species. Baron 6270 bears a fragment with short inflorescences and very small (2.2–3.3 × 1.5–2.2 cm), closely spaced, broadly elliptical leaves with entire margins, which are not glaucous. As the inflorescence is well past anthesis, the small size of the leaves and internodes is not due to immaturity. The specimen might be an aberrant individual of H. nudiflorum   or an otherwise unknown related taxon. No locality data are available for Baron’s collections, so it is not possible to attempt to relocate the collected populations, and the available material is not adequate to recognize new species. 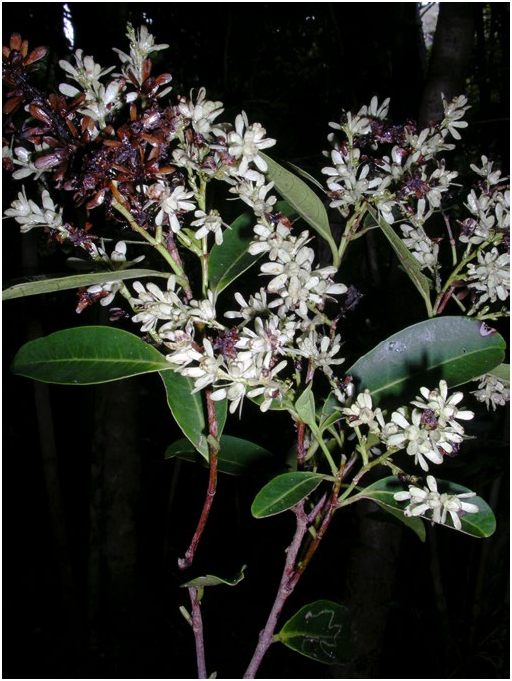