Etymology: The name is formed from the Latin arena (sand), referring to the name of the type-locality (Areias = arena), and the Latin verb cólere (to inhabit).

Distribution: Known only from the type-locality.

Description. External features. Live and preserved specimens whitish, both dorsally and ventrally. Triangular head with large, pointed auricles in live specimens, and a pair of small eyes; posterior tip pointed ( Figs. 5–7 View FIGURES 5–7 ). Body up to 14 mm long and 2 mm wide ( Table 1). Mouth located in the median third of the body and gonopore in the posterior third of the body ( Table 1; Fig. 7 View FIGURES 5–7 ).

Cutaneous musculature composed of three layers, viz. a thin subepithelial circular layer, followed by an oblique layer with decussate fibers and a thicker layer of longitudinal muscle. The cutaneous musculature is weakly developed; the ventral (10–12 µm thick), about twice as thick as the epidermis, is slightly thicker than the dorsal musculature (5–8 µm thick) in the pre-pharyngeal region.

Digestive system. Pharynx cylindrical, non-pigmented; about 1/3 to 1/4 of the body length. It is located in the median third of the body; mouth at the posterior end of the pharyngeal pouch, which shows a posterior diverticulum. No esophagus was observed. Anterior ramus of the intestine trunk dorsally to the brain.

Female reproductive system ( Figs. 9, 11–13 View FIGURES 8–12 View FIGURE 13 ). Vitellaria well developed, located dorsally and between intestinal branches ( Fig. 9 View FIGURES 8–12 ). Ovaries ovoid, about 80–90 µm in its lateral axis in the holotype. The gonads are situated dorsally to the ventral nerve cords, in close proximity to the brain, in the anterior 1/10th of the body. Ovovitelline ducts arising from the lateral surface of the ovaries and running backwards dorsally to the ventral nerve cords and ventrally to the sperm ducts. Just behind the gonoduct, the ovovitelline ducts slightly turn dorsally and fuse to form a short common section, which opens into the most distal part of the bursal canal, about halfway the distance between the dorsal and ventral epidermis ( Fig. 13 View FIGURE 13 ). Copulatory bursa ovoid with a narrow lumen, located next to the pharyngeal pocket. Bursal canal long, almost horizontally disposed, slightly bending and becoming wider just before communicating with the gonoduct ( Figs. 12–13 View FIGURES 8–12 View FIGURE 13 ). Gonoduct almost straight ( Fig. 13 View FIGURE 13 ).

Ovovitelline ducts lined with ciliated, cuboidal epithelium with insunk nuclei, turning to a nucleated epithelium close to their joining to form the common ovovitelline duct. Bursal canal lined with a nucleated, columnar epithelium ( Fig. 11 View FIGURES 8–12 ), showing an irregular height close to the opening into the gonoduct. Copulatory bursa and bursal canal coated with a thin musculature (about 3–4 µm thick), which is composed of interwoven longitudinal and circular muscles. Shell glands, producing a finely granular, erythrophil secretion open into the bursal canal close to the opening of the common ovovitelline duct ( Figs. 12–13 View FIGURES 8–12 View FIGURE 13 ).. Numerous cement glands, producing a coarsely granular, xanthophil secretion, open into the gonoduct ( Figs. 12–13 View FIGURES 8–12 View FIGURE 13 ). In addition, the gonoduct receives the openings of other two types of scarcer glands, one producing an amorphous, cyanophil secretion and the other an erythrophil secretion.

Comparative discussion. With respect to its external features, Girardia arenicola   differs from its congeners by having both a whitish body, as well as eyes. It resembles the hypogean Girardia mckenziei (Mitchell & Kawakatsu, 1973)   , which has two minute eyes. However, G. mckenziei   has a slightly pigmented body, whereas G. arenicola   maintains a whitish colour after fixation, similarly to other troglobitic species ( Mitchell & Kawakatsu 1973a, b; Souza et al. 2015, 2016).

Regarding the reproductive system, G. arenicola   shares some similarities with species that show dorsal or dorso-ventral testes, an almost horizontally disposed bursal canal and male and female atria separated by a constriction. These species are the following: G. anderlani ( Kawakatsu & Hauser, 1983)   , Girardia arimana (Hyman, 1957)   , G. chilla ( Marcus, 1954)   , G. guatemalensis (Mitchell & Kawakatsu, 1973)   , and G. paramensis (Fuhrmann, 1912)   ( Mitchell & Kawakatsu 1973b; Kawakatsu & Mitchell 1981; Kawakatsu et al. 1983; Sluys 1992; Sluys et al. 2005). It mainly differs from these species by the shape of the bulbar cavity and/or the course of the spem ducts through the penis bulb. In Girardia arimana   , the sperm ducts traverse the penis bulb and open into the ejaculatory duct and in G. guatemalensis   , G. chilla   and G. paramensis   there is a tubular bulbar cavity ( Marcus 1954; Kawakatsu & Mitchell 1981; Kawakatsu & Froehlich 1992; Sluys 1992; Sluys et al. 2005), differing from the large and branched bulbar cavity with multiple diverticula of G. arenicola   . In G. anderlani   , the bulbar cavity is wide and with two chambers, i.e. an antero-ventral one, which receives both sperm ducts, and a blindly ending postero-dorsal chamber ( Kawakatsu et al. 1983). In contrast, G. arenicola   shows a bulbar cavity with multiple diverticula, receiving the sperm duct openings on each side. In addition, it is noteworthy the occurrence of a common ovovitelline duct, similarly to G. arimana   , among others. However, G. arenicola   can be easily differentiated from G. arimana   , since in G. arimana   the common ovovitelline duct is relatively longer and the sperm ducts traverse the penis bulb, joining to open directly into the ejaculatory duct ( Sluys 1992). 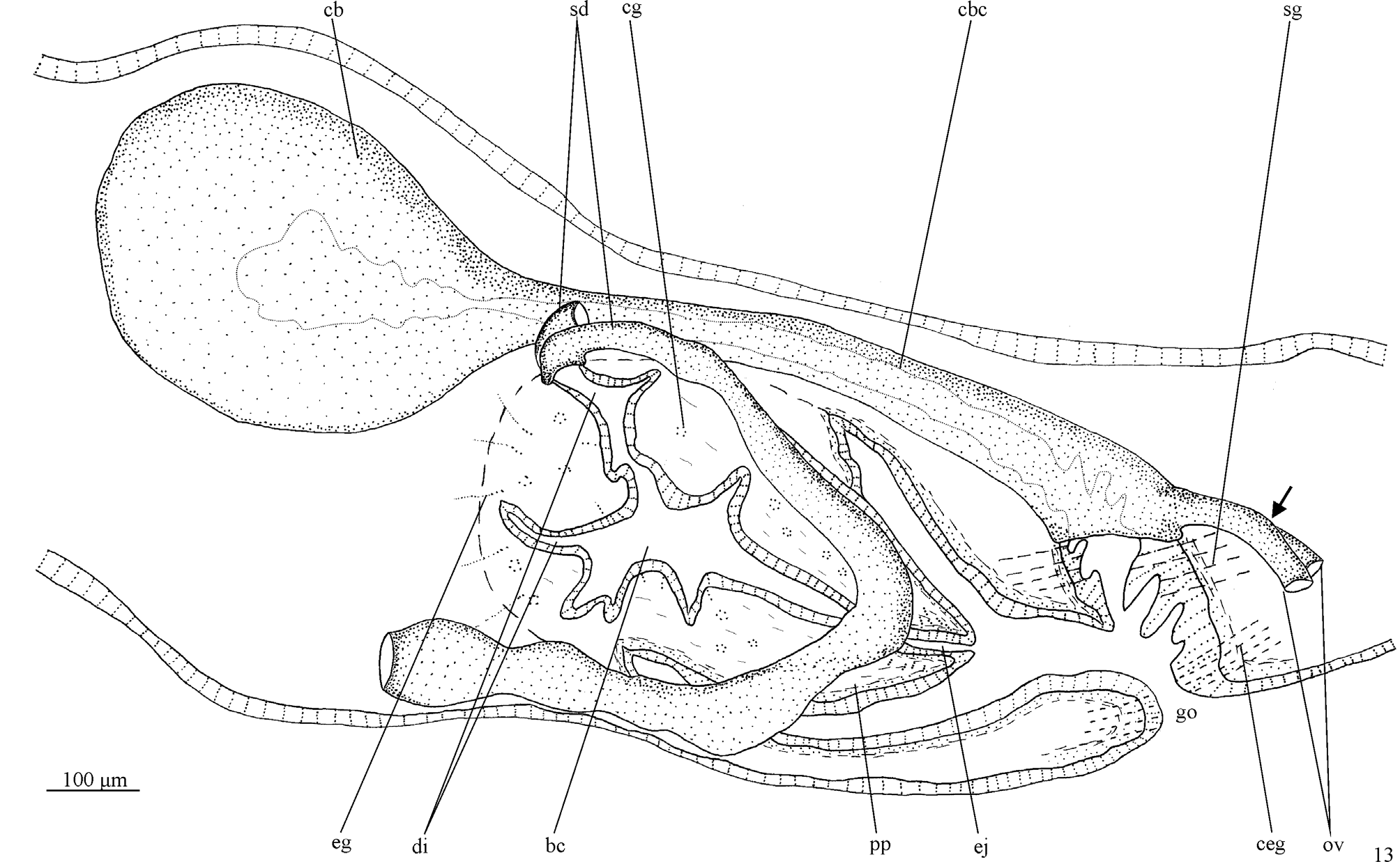 FIGURE 13. Girardia arenicola. Sagittal composite reconstruction of the copulatory apparatus of the holotype. The arrow indicates the joining point of the ovovitelline ducts. Anterior to the left. 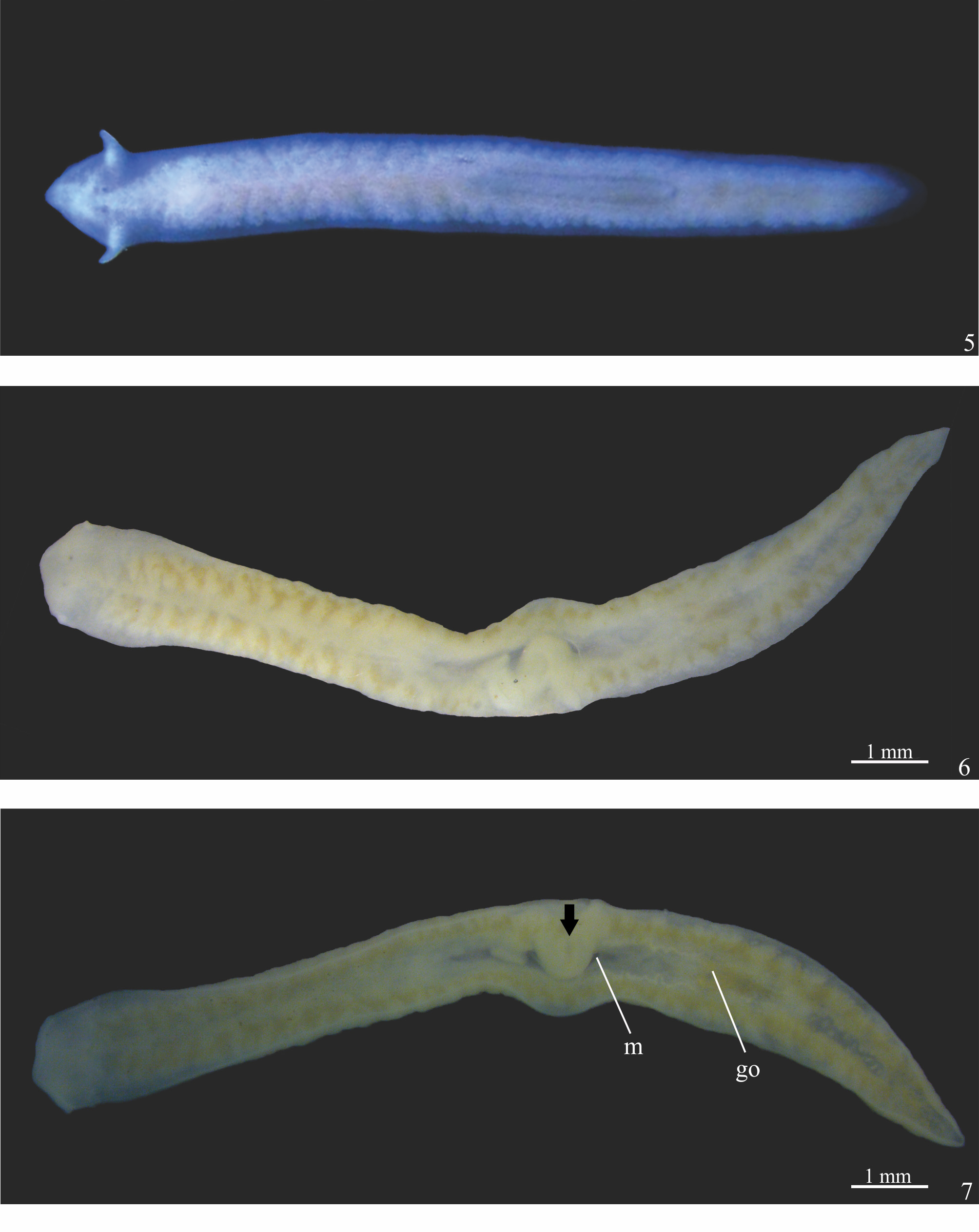 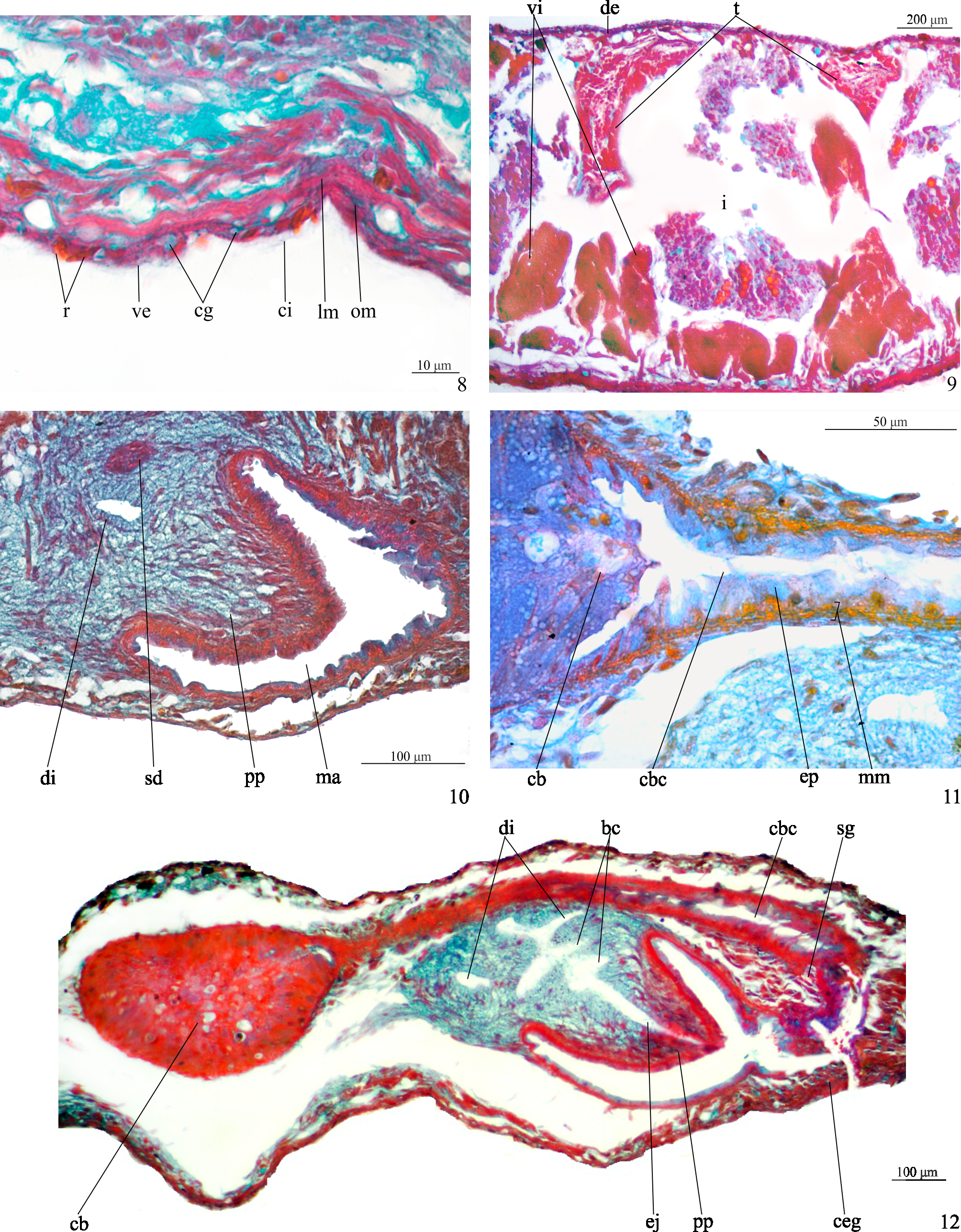