This diagnosis applies to populations of Gehyra genetically assignable to the “ montium clade” of Sistrom et al. (2013).

Nostril bordered by rostral, first supralabial, supranasal and two post nasals, the upper usually markedly larger than the lower. None to three (modally 1) moderate internasal scales separate the supranasals above the rostral. Supralabials 8–11 (mode 8). Infralabials 7–9 (mode 8). Consistently two pairs of chin shields, anterior pair in contact with only the first infralabial. Chin shields separated from the third and succeeding infralabials by the interpolation of a series of enlarged scales (parinfralabials) that margin the ventral edge of the infralabials. Second infralabial notched where this parinfralabial scale row starts. Scansors under pad of fourth toe divided, 7–8 (mode 7). Precloacal pores in males 10–13, (mean = 11.3, n = 16).

The karyotype is 2n=42a, a karyotype that is shared with a number of Gehyra species , including G. minuta and some populations that are morphologically distinct from G. montium ( King 1979, fig. 13a) and currently assigned to G. punctata (Fry, 1914) in Western Australia.

In life, dorsally light grey-brown to reddish brown to pinkish, the entire dorsal surface patterned by a strong to weak reticulum of blackish grey ( Fig. 8 View FIGURE 8 ). Scattered over the dorsal surface are small circular pale spots, often only contrasting weakly with the dorsal background colour. In preservative any rusty colour tones and pale spots tend to disappear leaving the specimens greyish with a dark reticulum.

Distribution. The western portion of the Australian arid zone, from the north-west of South Australia, and south-east of the Northern Territory, north-west to the Pilbara Region of Western Australia.

Comments. Throughout arid areas of central and northern Australia, rocky outcrops may harbour relatively small Gehyra species , typically with rufous colouring and a pattern including pale spots. The name G. montium has often been applied to many such populations, but our study reveals that this species only just extends east of the Western Australian border, to the Tomkinson Ranges and Birksgate Ranges (east to Mt Kintore) in South Australia and is probably restricted in the Northern Territory to the far south-west corner (Uluru and the Petermann Ranges). The fact that the species was not recognised hitherto as extending westward as far as the Pilbara possibly reflects a tacit assumption that G. montium was a central Australian species, as well as the similarity of colour pattern in preserved G. montium and G. variegata . This similarity is such that individuals of the two species will continue to be difficult to separate by morphology alone

In the adjacent rocky ranges of north-west South Australia and the southern and central Northern Territory, G. montium is replaced by geckos of Clades 2 and 1 ( Sistrom et al. 2013), respectively, and these are described below as new species.

Populations we have assigned to this species require further study in several areas. Colour and pattern as described here is based on central Australian populations for which we had freshly collected material of known genotype; preserved specimens examined by us suggest that this colour pattern extends to Pilbara populations, but in this region the species is more variable in colour pattern. Animals of known genotype from this area include not only animals with a dark dorsal network, but also almost plain individuals, grey in preservative but possibly rusty in life, with no more than scattered small black speckles. Three specimens genotyped as G. montium by Sistrom et al. (2013) are from areas to the south and west of the species’ main distribution, apparently in areas of sandy desert rather than rocky ranges. Further collection and typing of specimens from these populations is needed to confirm that these seemingly atypical records are correctly documented, and that there are populations of Gehyra from these areas that pertain to this species.

When describing this species Storr (1982) suggested it might represent the 2n=38 karyotypic group of King (1979). However, the data of Moritz and our own checks of karyotype show that populations conspecific with the type population of montium have the 2n=42a karyotype. 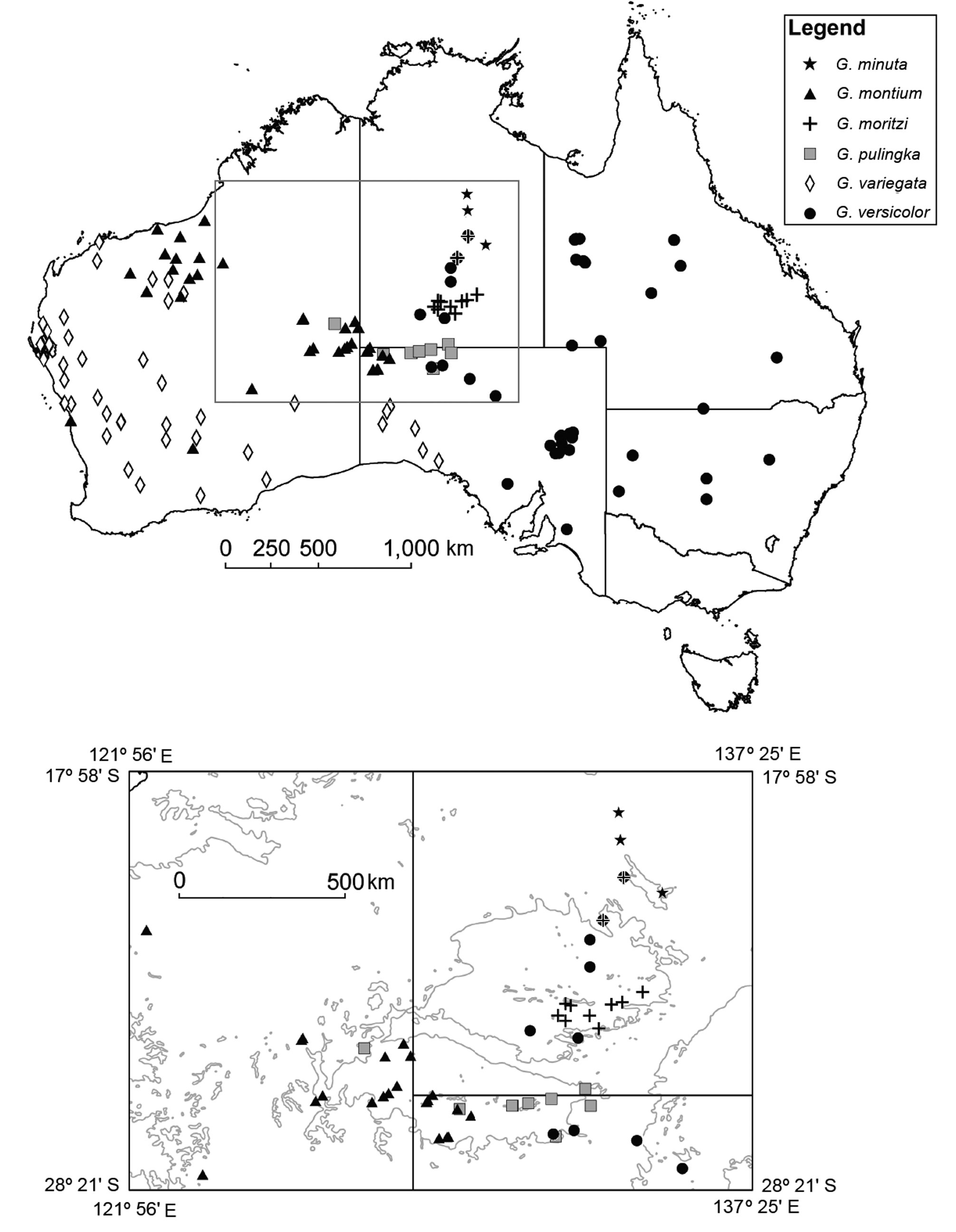