Allorrhina Burmeister 1842: 251   . Type species: Gymnetis concolor Gory and Percheron 1833: 76   , here designated. Burmeister (1842) stated he knew only this species based upon actual specimens, while the second species in his new genus, Gymnetis menetriesii Mannerheim   , he knew only from the description. Accordingly, the former is designated as the type species. Gymnetis concolor   is a junior synonym of Cetonia scabriuscula Swederus. Burmeister (1842: 806)   belatedly recognized that C. scabriuscula Swederus   belonged in Allorrhina   .

Distribution. Species of Allorrhina   are known from Venezuela and the Guianas in northern South America south to Argentina.

Diagnosis. As is the case with many other New World gymnetines, there seem to be few morphological characters, other than unreliable color and pattern, to circumscribe taxa, especially considering the similarity of the form of the parameres within genera. At least with Allorrhina   and Cotinis   , the armature of the head provides additional characters, although these should be used cautiously since this armature is subject to allometric growth exemplified by minors and majors. The characters of most taxonomic value for Allorrhina species   are: dorsal color; absence or presence of cretaceous marks on the pronotum, elytral margins, pygidium, and ventrites; length; form and/or armature of the frons and clypeus; sculpturing of the pronotum and pygidium; and form of the parameres. The mesometasternal process is similar in all the species and is slightly elongate, parallel to the ventral axis of the body in lateral view, and with subparallel sides and a broadly rounded apex in ventral view (e.g., Fig. 5 View Figs ). One species is noticeably pubescent on the process ( Fig. 10 View Figs ), while in the remaining species the process is glabrous or nearly so (e.g., Fig. 32 View Figs ).

Natural History. Species of Allorrhina   are diurnal. Unlike some species of Amithao Thomson, I   have seen no records of any Allorrhina species   being occasionally attracted to lights at night. The adults are found from near sea level to 1,800 m and are usually attracted to ripe fruits placed in traps. There are rare observations of species being found on a particular tree or flower, but their life history remains unknown. None of the larvae have been described. 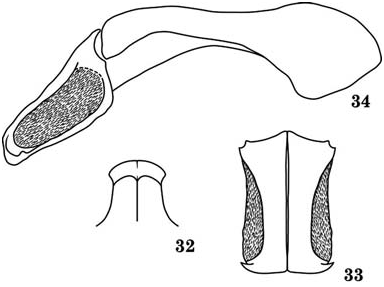