‘‘Colony attaining a height of about two inches [50.8 mm]; stem slender, flaccid, much and irregularly branched, and with the distal portion for a great extent destitute of the peripheral tubes’’ ( Allman 1888, p 42).

Hydrothecae alternate, more or less one plane. Hydrotheca tubular, cylindrical at distal half, diameter approximately constant from hydrothecal aperture to the middle of hydrothecal length, then slightly decreasing up to become more or less constant, forming a kind of bottleneck at the most basal part. Hydrotheca gently curved abcaulinarly; approximately three-quarters of adcauline wall adnate to internode. Adcauline wall mostly convex, but concave at basal fourth. Abcauline wall straight or slightly convex at basal half, concave at distal half. Hydrothecal aperture circular, directed upwards, forming an angle of ca 45 ° with longitudinal axis of branch. Rim even, sometimes with up to five short renovations.

There is some confusion regarding the naming of the type material of this species. Allman (1888) did not specify holotypes in his paper and part of the material studied by him is now deposited in the collections of the ZMUC (labelled as ‘‘cotype’’) and the BMNH. The International Commission on Zoological Nomenclature (1999) considered that ‘‘cotype’’ is a term not recognized by the Code, formerly used for either syntype or paratype, and should not be used anymore in zoological nomenclature (Recommendation 73E); in the case of colonial material, cotype was also used in the sense of ‘‘part of the holotype material’’. On the other hand, the BMNH material was referred as ‘‘holotype’’ by Vervoort and Watson (2003), who also referred to a ‘‘paratype’’ present in the collection of the Nationaal Natuurhistorisch Museum (RMNH). Although it is possible to consider the existence of split holotypes (with the same collection data of the original description of the species), ‘‘paratypes’’ may not be considered as valid, as there was no such designation by Allman (1888). In the case that the original material is regarded as being ‘‘syntypes’’, a lectotype should be selected.

Vervoort and Watson (2003), after examining part of the supposed ‘‘holotype’’ in the Natural History Museum (88.11.13.31), found this species to be quite near to Acryptolaria conferta , noting that it was extremely difficult to define characters by which the two could be distinguished. Finally, they pointed out that both species may well be conspecific. Actually, the association of nominal records of A. gracilis and A. conferta is long known in the literature, such as the synonymy of the records of A. gracilis by Billard (1906b, 1906c) and Patriti (1970) (cf. Ramil and Vervoort 1992, p 43; see above). In our opinion, however, both species are clearly distinguishable. Although the hydrothecae are of similar size (cf. Table XV), in A. conferta the free portion of the adcauline hydrothecal wall is distinctly longer, its hydrothecae lack the basal bottleneck (the most distinctive character for A. gracilis ), and the branches form a clear zigzag. Finally, A. gracilis has larger nematocysts (19.5–21X7.5–9 Mm in A. conferta ). 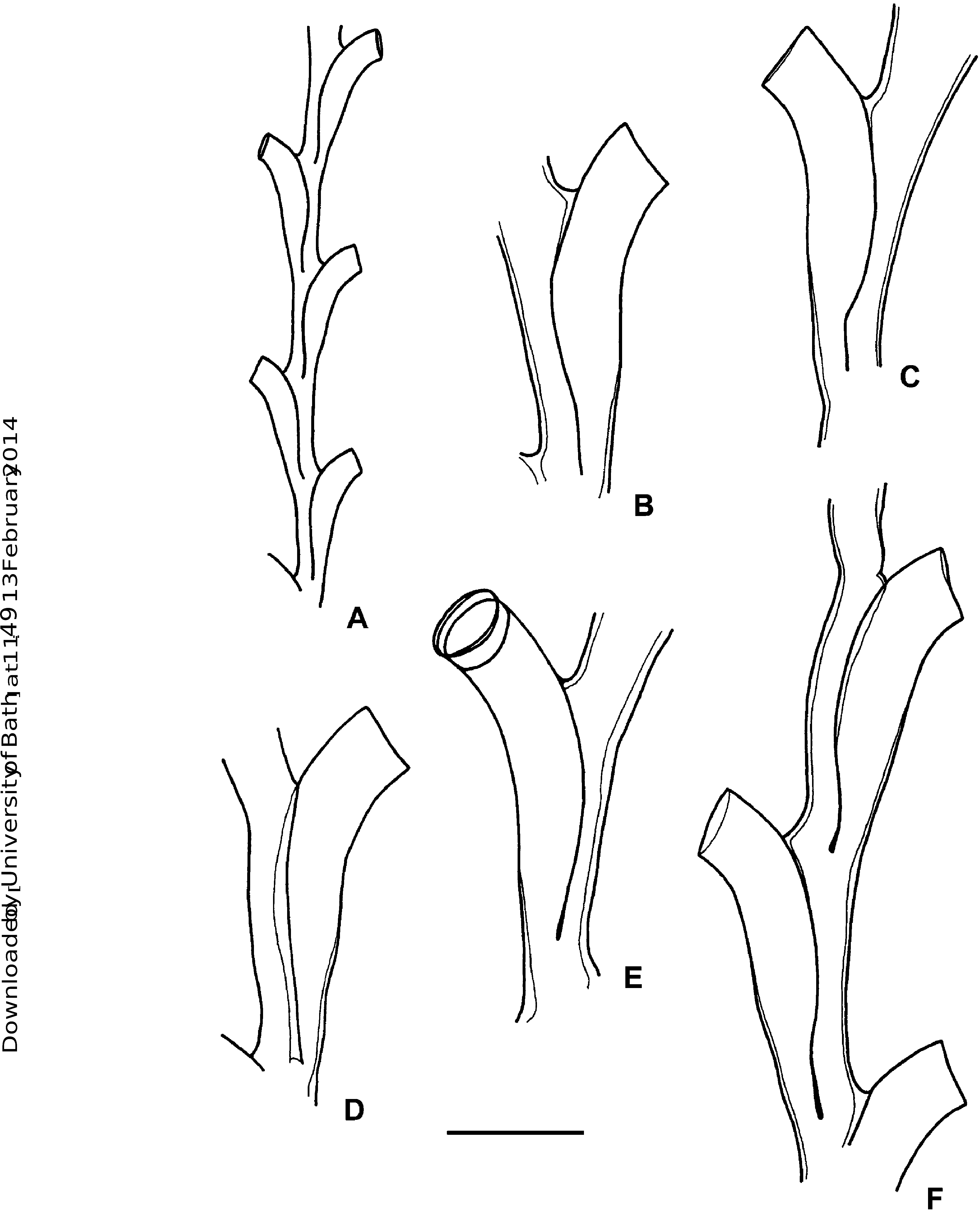 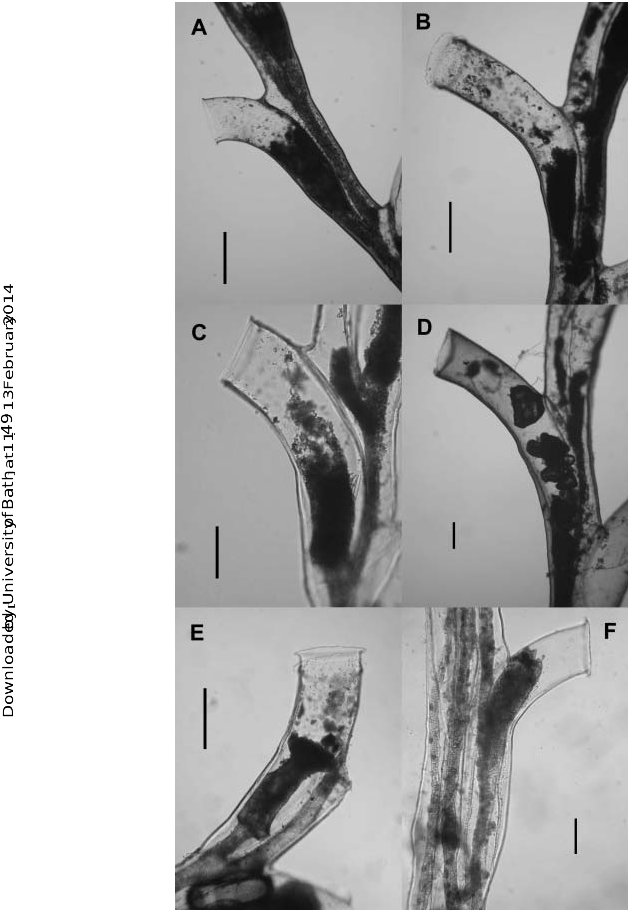 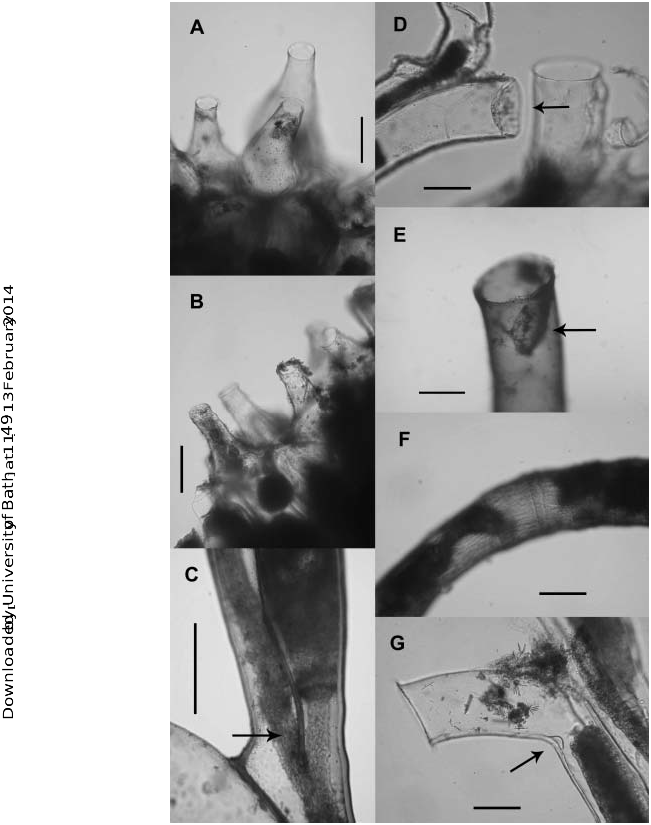