The new species shares some morphological characters with O. jorgensenii   ; both are unbranched erect herbs, the leaf blades, pedicels, pollinia and stylar heads have similar dimensions and the two species possess umbelliform inflorescences. However, O. teyucuarense   has a set of features that are unique in Oxypetalum   in that it is the only unbranched erect species that is up to 1.50 m tall with calyx lobes pubescent adaxially, and corona lobes with an internal fold, open apically to form a cup, and the thick and ruminate stylar head appendages.

Distribution, habitat, and phenology: — Oxypetalum teyucuarense   is endemic to Teyú Cuaré, San Ignacio, Misiones, Argentina. Its slender, flexible stems rise over a sparse cover of tall grasses. The specimens were found growing within the crevices of a rocky sandstone substrate, at ca. 160 m elev., bordered by cerrado (savanna). Flowering occurs from October to January and fruiting in January to February.

Conservation status:— Oxypetalum teyucuarense   can be considered very rare, as it is known from only one population of 23 individuals. The area where it was found has ca. 400 m 2 and is situated in a private conservation reserve for ecotourism. This area has been explored by botanists and plant collectors for many years ( Biganzoli & Múlgura de Romero 2004), so it is unlikely that other population of the species occur in the locality. Its conservation status should thus be considered as critically endangered (CR D) ( IUCN, 2001).

Etymology:—The specific epithet refers to the locality Teyú Cuaré, where all of the specimens were collected.

Discussion: —The erect habit of Oxypetalum teyucuarense   , suggests that it belongs to of the clade that includes only erect species of Oxypetalum ( Farinaccio 2008)   . It shares some features with O. jorgensenii Meyer (1943: 60–63)   , which also occurs in Missiones: both are erect, unbranched herbs with similar-sized leaf blades, pedicels, pollinia and stylar heads as well as umbeliform inflorescences. Despite this overall similarity, O. teyucuarense   has a set of features that is unique in the genus. It is the only unbranched erect species that grows up to 1.50 m tall. In addition, its flower morphology is unusual in that the corona lobes present an internal fold that opens at the apex as a cup. The thick apex of the gynoecium is ruminate. The latter feature makes this species easy to recognize in the field. When the tall, slender plants are in flower, they become deflexed.

1. Oxypetalum oblanceolatum Farinaccio & Mello-Silva (2006: 236)   — O. oblanceolatum   was described from one collection from the Brazilian State of Paraná ( Farinaccio & Mello-Silva 2006).This species was considered as vulnerable according to IUCN (2001) Red List criteria, but the recent study of the one collection of CORD herbarium ( Thiers 2008) extends its range into Misiones Province, Argentina. Here it grows in a clearing surrounded by a monoculture of Pinus   , and thus O. oblanceolatum   should still be considered as vulnerable ( IUCN 2001).

2. Oxypetalum wightianum Hooker & Arnott (1834: 288)   — O. wightianum   is broadly distributed in south and southeastern region of Brazil, reaching western Paraguay ( Farinaccio 2005). One new collection of this species into Argentina was identified in Department Iguazú, at the border with Brazil, thus extending its range to Misiones Province. 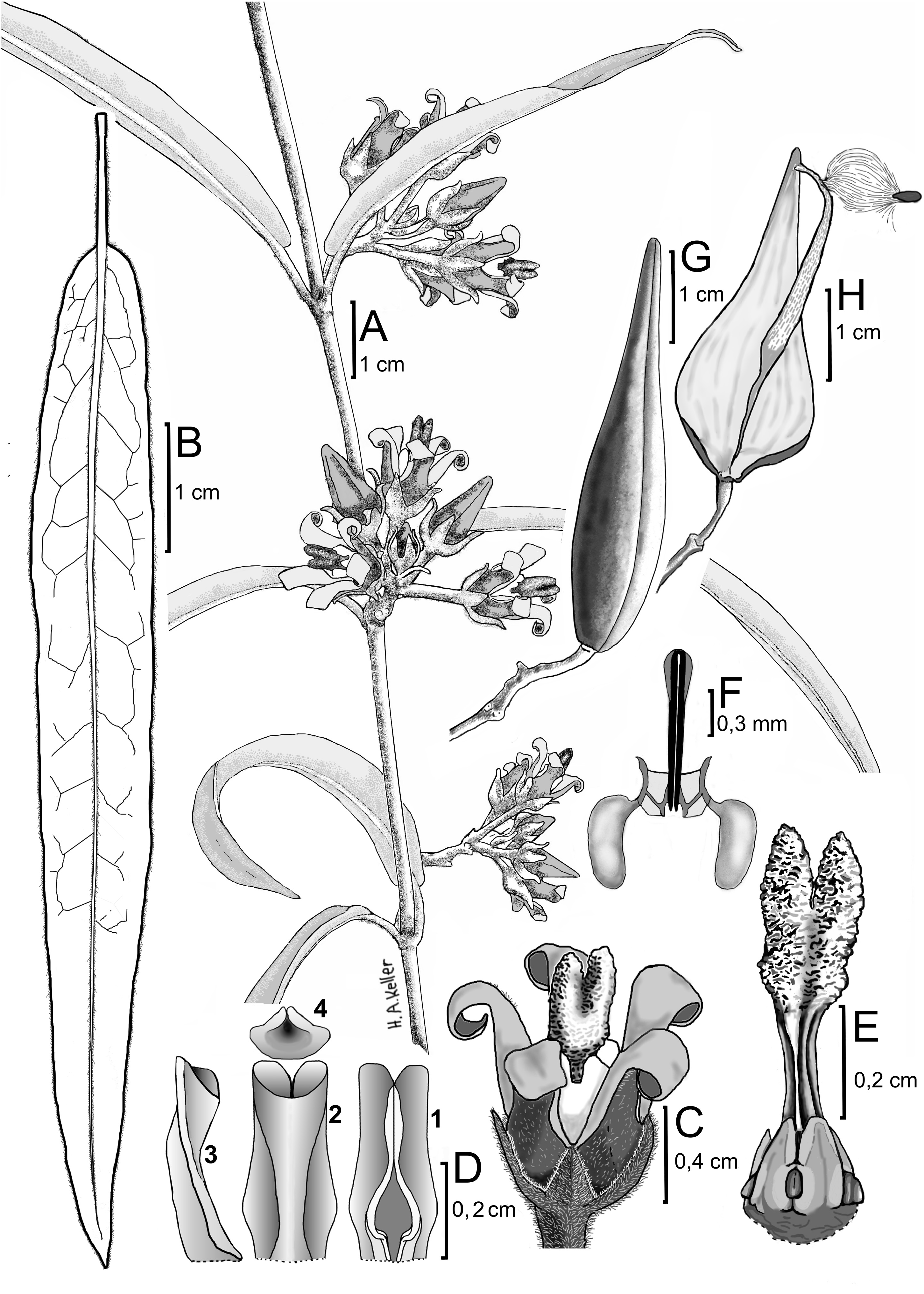