Color in life. Variable. In juveniles the abactinal surface is usually mottled with green, brown, beige and gray, whilst adults are yellow, brown, or orange on the abactinal surface. The actinal region is beige or yellowish in both, juveniles and adults ( Ummels, 1963; Hendler et al. 1995). Trindade specimens ( Figure 8 View FIGURE 8 A–C).

Comments. Oreaster consists of only two species in the Atlantic Ocean: O. reticulatus ( Linnaeus, 1758) (WA) and O. clavatus Müller & Troschel, 1842 (EA). Clark & Downey (1992) differentiated the two species primarily based upon the presence, in O. reticulatus , of a highly inflated disc, abactinal plates with tubercle or spine ( Fig. 8D View FIGURE 8 ), subambulacral spine large and heavy, and actinal pedicellariae not in alveoli (versus more or less flat disc, granules in the abactinal plates, slender and blunt subambulacral spine, and actinal pedicellariae in alveoli in O. clavatus ).

However, the variation in shape, from pentagonal to stellate, and the differing degrees of swollenness of the disc make this an extremely variable species. Morphological variations appeared to have led H. L. Clark (1942) astray in describing one specimen from Bermuda as a new subspecies (i. e., O. reticulatus var. bermudensis ). Downey (1973) found that the disc in small individuals of O. reticulatus was not inflated, and the marginal plates are relatively larger and more conspicuous than in the adults. One specimen from São Sebastião (R=125; MZUSP 1956) has a flattened disc, whereas the remaining studied specimens have strongly arched discs.

Ummels (1963) reported that most of the specimens of O. reticulatus from Saint Martin (Caribbean Sea) have a second subambulacral spine, which vary greatly in size. The Trindade specimens have only one spine in the subambulacral row ( Fig. 8G View FIGURE 8 ) and the actinal granules are arranged in mosaics; whereas the coastal specimens from São Sebastião and Santos, São Paulo (see under comparative material) have two such spines, the smaller being positioned behind the larger one. In the specimens from Santos, the granules are more distant from one another and hence not forming a mosaic.

The Trindade specimens have seven ambulacral spines, being five larges and two very small spines. The smaller ones are not easily detected and this is, probably, why in most of the literature only five ambulacral spines have been recorded for this species. The coastal specimens studied have 5–7 spines.

Despite Clark & Downey’s (1992) assertion that the two species are separated by an east and west Atlantic distribution, the species O. reticulatus is also recorded from the Cape Verde Islands ( Caso, 1944; Hendler et al. 1995; Guzman & Guevara, 2002; Entrambasaguas, 2008), and Canary Island ( Hernandéz et al. 2013), however in this last record the authors did not provide any morphological information. 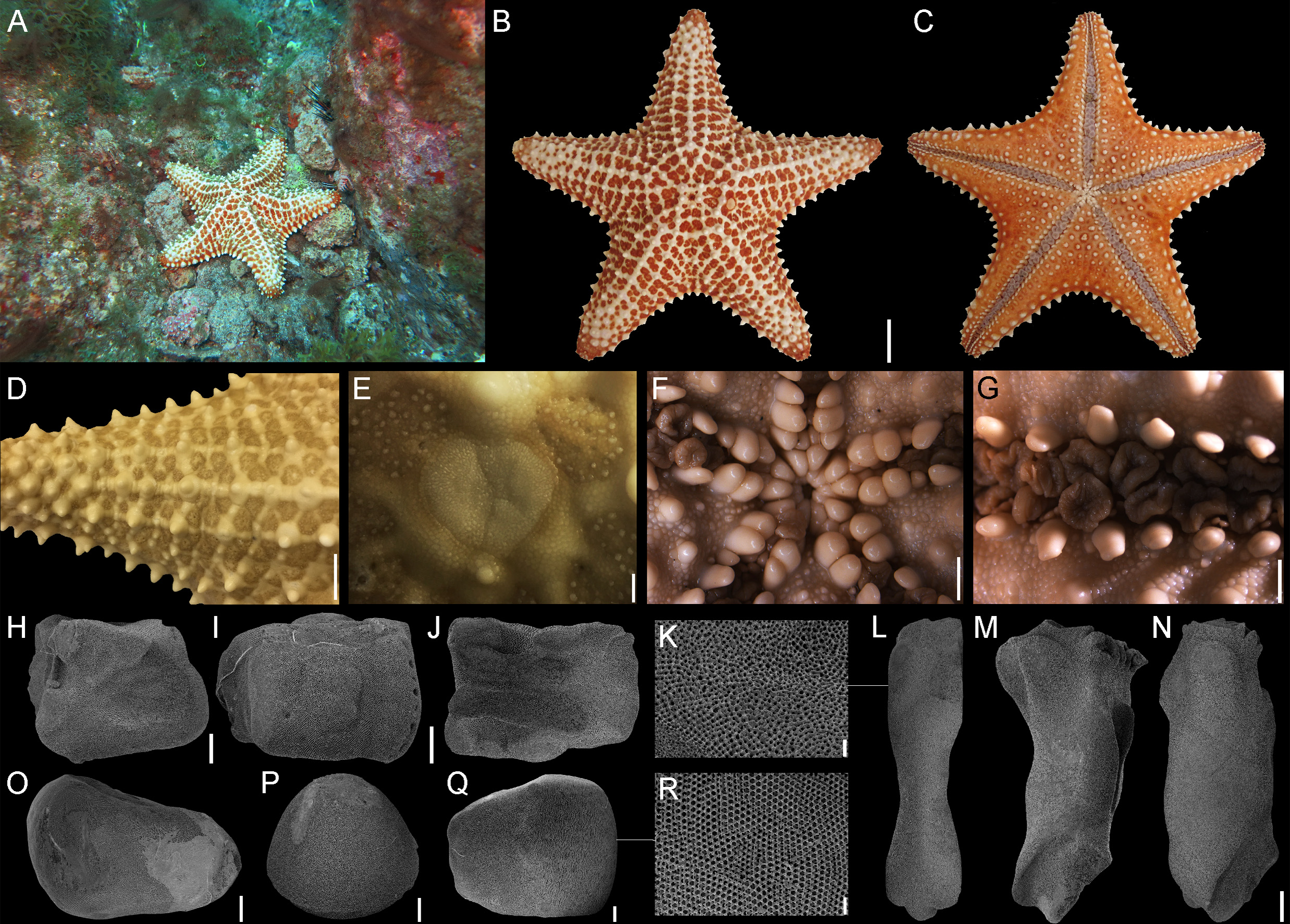