Tradescantia crassula   occurs in Argentina and Brazil (in the states of Minas Gerais, São Paulo, Paraná, Santa Catarina, and Rio Grande do Sul) (Fig. 8 View Figure 8 ). It is commonly found growing in rocky outcrops, grasslands and open areas, under full sunlight, as rupicolous or terrestrial. It is also found on roadsides and within the understory of open forests, as terrestrial or, more rarely, as an epiphyte.

Funez et al. (2016) indicate that Pellegrini (2015) erroneously designated the specimen Sellow 3033 (B100521014) as the lectotype for T. crassula   . However, their affirmation is incorrect according to the Code since the thesis lacks either a ISSN or an ISBN, and was never distributed to the general public ( McNeill et al. 2012, Art. 29.1). The work cited by Funez et al. (2016) was a draft version of the first author’s unpublished M.Sc. thesis, with many incomplete and partially incorrect data (Pellegrini, unpublished data), and therefore is not considered a effective publication by the Code. Furthermore, according to Art. 30.8 ( McNeill et al. 2012), any thesis published on or after 1 January 1953 and stated to be submitted to a university for the purpose of obtaining a degree, does not constitute effective publication; unless it contains any kind of statement or other internal evidence that it is regarded as an effective publication by its author or publisher. Since no statement is made in the final version of the thesis (i.e. Pellegrini 2015), the publication does not meet any of the Code 's requirements, and therefore cannot be treated as effectively published. In the final version, Pellegrini (2015) gives detailed information on the typification of T. crassula   , which is effectively published here and corrects the typifications by Funez et al. (2016).

The date written on the original label, and treated by Funez et al. (2016) as the collections date, is "Dec. 1836". Also, it is possible to see in the label the names of Sellow and Humboldt. According to Stafleu and Cowan (1985), Friedrich Sellow lived from 1789-1831, and collected plant specimens in Southern Brazil and Uruguay 1819-1831, funded by Humboldt. This easily explains why both botanists are mentioned in the original label, and why the collector is to be considered as Sellow, instead of Humboldt or both botanists. Furthermore, given that Sellow died in 1831 and his expeditions were done just before his death, it would be impossible for "Dec. 1836" to represent the actual collection date. We believe this date might correspond to the date when this specimen was acquired by Kunth, and placed into his personal herbarium. Finally, Link and Otto (1828) make direct reference to their new species being based on Sellow collections. According to the Code ( McNeill et al. 2012, Art. 9.2), the Sellow 3033 (B100521014) specimen is a suitable choice for a lectotype, superseding the lectotypification of the original illustration, done by Funez et al. (2016). The epitypification by Funez et al. (2016) should be disregarded entirely because the original illustration is informative enough to correctly apply the name T. crassula   . All the diagnostic features of this species (see comments below) are visible and sufficient for appropriate diagnosis, in the original illustration.

The species in this section are especially variable morphologically and when in cultivation or growing in shaded areas they can change their vegetative morphology quite drastically. Few characters in the vegetative organs were observed to be constant in the T. crassula   group and thus are of little taxonomic relevance. This can be exemplified by the phyllotaxy and pubescence of the leaf-blades, which have been shown to vary greatly due to ecological features ( Pellegrini 2015, 2016). On the other hand, the pubescence of the internodes, leaf-sheaths, and of the margin of the leaf-blades were observed to be constant and reliable for species delimitation. As previously indicated in other Tradescantia   sections ( Anderson and Woodson 1935), the pubescence of the pedicels and sepals seem to be highly stable within each species, easily observable, and thus, reliable for species delimitation. As aforementioned, T. crassula   is highly variable in vegetative morphology. All studied individuals always presented glabrous leaf-blades, setose sepals with long hairs along the keel, and white petals. The specimens cited by Funez et al. (2016) as representing T. schwirkowskiana   , fit perfectly the circumscription adopted by us for T. crassula   , showing variation only in the degree of branching of the stems, color of the leaf-blades, and degree of impression of the secondary veins. All of this morphological variation can be easily explained by the ecological features of the area where the specimens were collected (i.e. shaded moist forests in mountainous regions from the state of Santa Catarina). Aside from that, the authors state that T. crassula   possesses spirally-alternate leaves and a rhizomatous base. While developing our studies for the taxonomic revision of T. sect. Austrotradescantia   and a morphological phylogeny for the genus ( Pellegrini 2015), we analyzed 50% of the species in the genus and observed that all species of Tradescantia   produce spirally-alternate leaves when young. This feature is normally lost during development of most species of T. sect. Austrotradescantia   , but is always retained by T. valida   G. Brückn. (see comments below), sometimes retained by T. cerinthoides   Kunth ( Pellegrini 2015, 2016), and rarely retained by T. crassula   (Pellegrini, pers. obs.). No species in Tradescantia   were observed to produce rhizomes ( Pellegrini 2015). The only known drought resistance strategy observed in the genus was the production of tuberous roots; present in all species of T. sect. Mandonia   , T. sect. Parasetcreasea   , T. sect. Separotheca   , T. sect. Setcreasea   and sect. Tradescantia   , and exclusively in T. commelinoides   Schult. & Schult.f. from T. sect. Cymbispatha   ( Pellegrini 2015). Thus, T. schwirkowskiana   is here synonymized under T. crassula   . 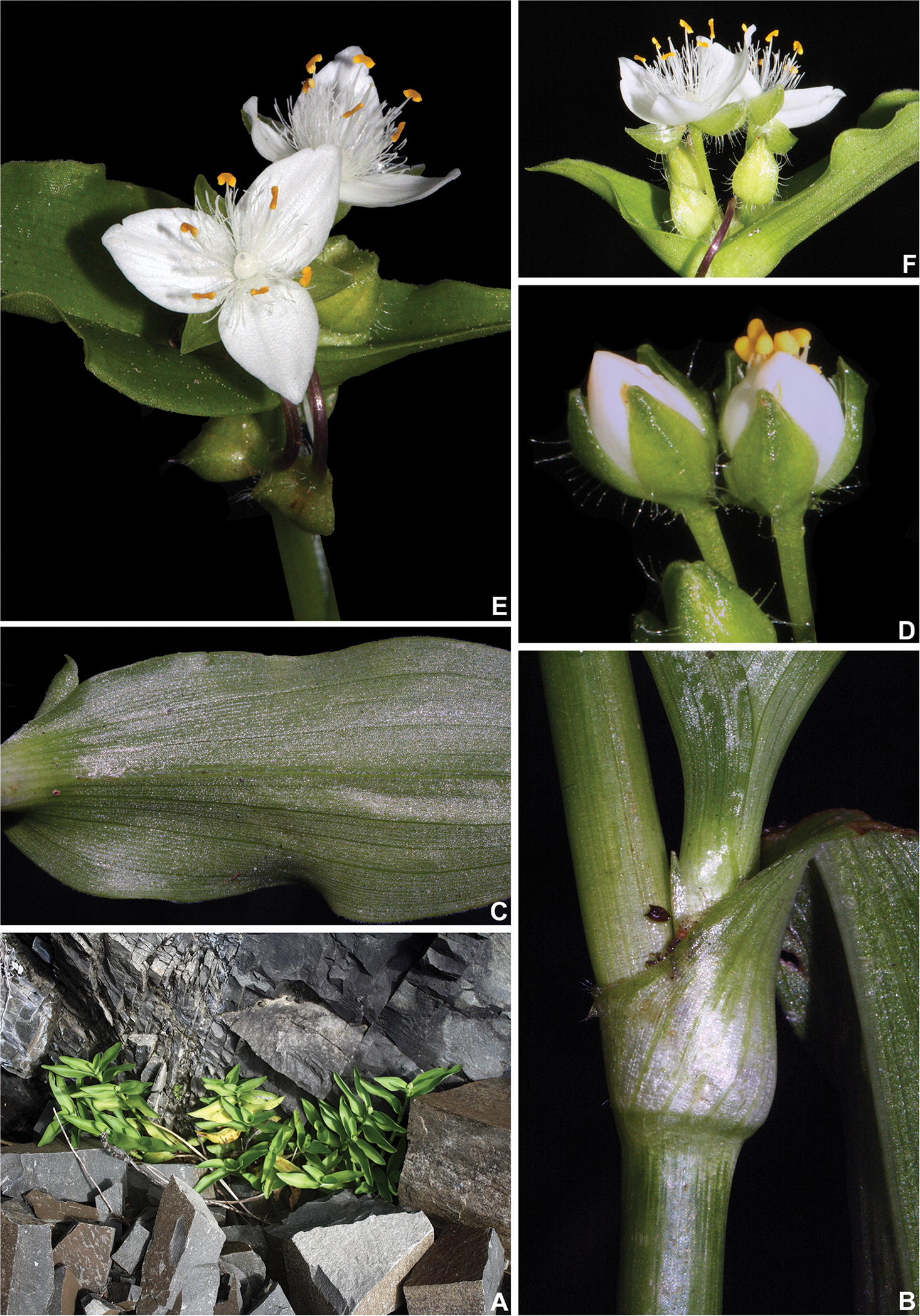 Figure 1. Tradescantia crassula Link & Otto. A habit, showing the erect stems, and distichously-alternate leaves with conduplicate blades B detail of the stem and leaf-sheath C detail of the abaxial side of the leaf-blade, showing the lack of hairs and the slightly conspicuous secondary veins D detail of floral buds, showing the setose hairs, restricted to the keels of the sepals E flower F detail of the inflorescence, showing the non-saccate cincinni bracts. Photographs by M. O. O. Pellegrini. 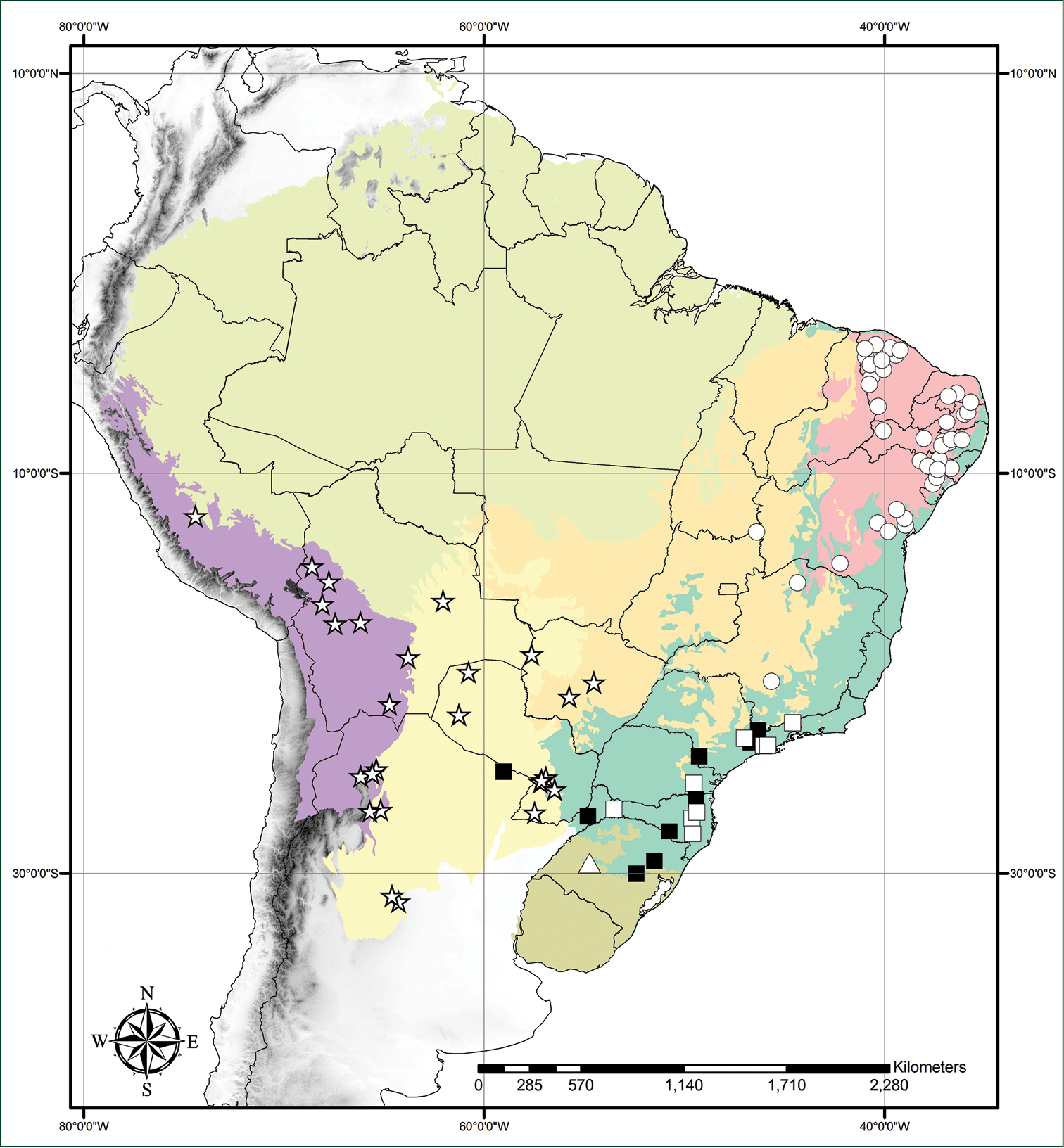