Holotype (slide N. 5096), one paratype and two eggs (one of which in the ovary of the paratype) from an undetermined moss sample developing on a tree.

Cuticle with very small dots; eye spots absent; pharyngeal bulb with three rod­shaped macroplacoids and a microplacoid as long as the second macroplacoid; eggs with long, conical processes, smooth (only a trace of roughness is visible on the terminal portion); egg shell dotted.

Description of the holotype

Claws of hufelandi type ( Fig. 3 View FIGURE 3 B) with thin accessory points on the main branches. Anterior and posterior claws of the hind legs 10.4 m (pt = 24.8) and 10.9 m long (pt = 26.0) respectively. The unfavourable orientation of the other claws does not allow the correct measurement. Small lunules with smooth margins are present. A cuticular thickening, slightly visible, is present near the lunules on the first three pairs of legs.

The eggs, laid freely, are spherical and provided with long, conical processes ( Fig. 3 View FIGURE 3 C, D). We found one egg without embryo but fortunately the paratype has one mature, recognizable egg in the ovary. Diameter is 69 m without processes, 96 m including these structures. The processes, 22–23 around the circumference and about 82 in the hemisphere, are long, conical, very sharpened at the apex; the terminal portion is flexible and never forked. They are 16.5–17.3 m high; basal diameter 8.0– 8.8 m. The surface of processes is smooth, without traces of reticular sculpture; only a trace of roughness is visible on the terminal portion. The egg shell is dotted; some dots are contiguous to one another and seem to give an irregular reticular design.

The paratype has the same qualitative characteristics of the holotype; the dimensions of some structures of the two specimens are indicated in Table 3 View TABLE 3 .

M. contii   sp. n. is similar to M. armatus   , the eggs of which are unknown, but it differs from it by lacking eye spots, and by lacking a spur on the claws.

M. contii   sp. n. differs from M. kovalevi   in the following features: eye spots absent; buccal cavity with an anterior band of teeth and a posterior ring of teeth (both absent in M. kovalevi   ), microplacoid more developed; and in some characters of the eggs (egg processes more regular in shape, never forked, without small spines but with a trace of roughness only in the terminal portion, egg shell dotted without a true regular reticular ornamentation).

Iharos, 1973 did not specify whether M. wauensis Iharos   , has smooth or sculptured egg processes, but M. contii   sp. n. differs from this species in having a more developed microplacoid, egg processes more numerous and spaced, egg shell dotted and without tubercles. 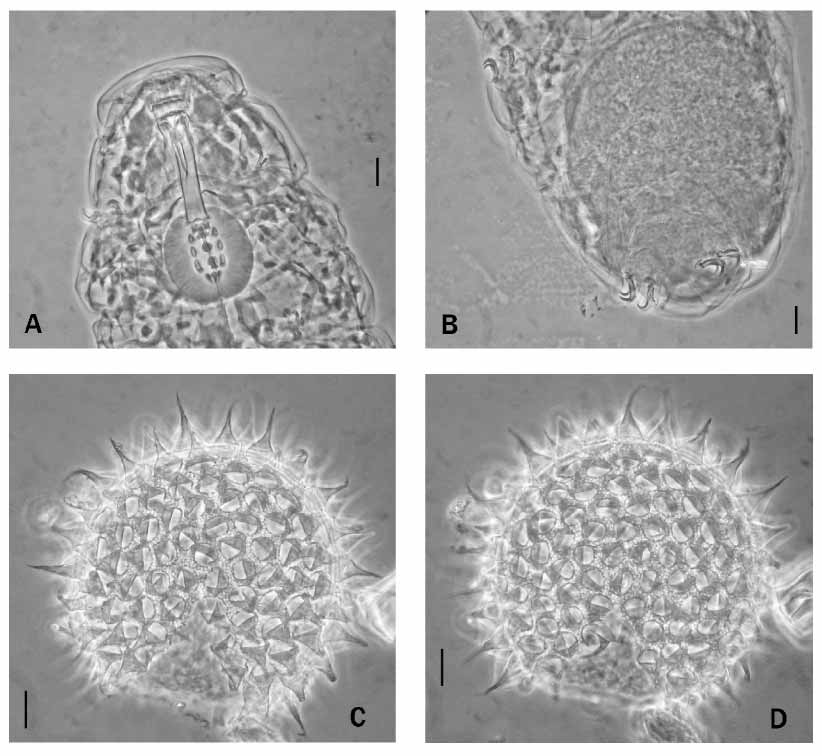