Etymology. This species gains its name from the district, the Pilbara, from which all the present material was collected. I also wish it to honour my great-uncle, Tom Starr, who spent much time “in the early days” exploring for gold in the Pilbara and made a significant discovery at Marble Bar in the 1930s.

Head ( Fig. 14B View Fig ) posteriorly with pyriform frontal organ posteriorly, preceded by rounded prominence containing eye, a tiny protuberance below eye and a large rostrum at right angles to head. Rostrum somewhat longer than distance between eye and pyriform organ, curved downwards at its apex, and containing triangular naupliar eye dipping at angle to the rostrum axis and occupying much of its basal area. Rostrum length twice its own basal width.

First antenna with 9–10 fairly evenly-sized lobes; usually a spine present near base on same side as lobes. Second antenna with two flagella each of about 12–16 beaded flagellomeres, these of variable length but generally longer and bigger basally. Flagellomeres around midlength each with 7–9 setae on dorsal surface.

Trunk segments 25–26 in number. Dorsally, posteriormost segment with spineless protuberance, preceding 7–8 segments each with 3–5 spines on protuberance, then further anteriorly another 7–8 segments with long setae varying from many posteriorly to 1–2 on more anterior segments. Hand of claspers ( Fig. 14D View Fig ) with asymmetrical outgrowth near inner basal corner. Immovable finger with numerous spines apically, central ones short and stout, giving way to long, thin curved spines on inner edge. Palp of movable finger short with setae apically. Base of movable finger with evenly curved, slight protuberance opposite immovable finger, and evenly curved finger terminating in small spine. Palp of hand two-segmented, as long as hand in first clasper and about half as long again in second clasper; distal segment bearing many short setae apically, but no setae on junction of palp’s two segments.

Telson ( Fig. 14C View Fig ) armed with two rows of about 11 strong, subequal spines, although anterior spine almost twice as large as the others and curving slightly posteriorly; last 2–3 spines on curved, telsonic claw; this claw curved anteriorly and more than twice as long as basal width.Two telsonic setae inserted on protuberance about one quarter the way along dorsal surface of telson. Caudal claws well developed, at least twice as large as telsonic claw and curved concavely forward. Basal half thick, almost straight, and bearing about 10 shortish setae mesodorsally. Two short spines located about two thirds of way along each caudal claw on dorsal surface, followed by row of many denticles situated dorsally on pointed apex of caudal claw.

Head ( Fig. 14F View Fig ) similar to that of male, but rostrum short, about as long as deep, and blunt. Naupliar eye of about same size and position as in male, occupying much of rostrum. First antennae shorter than in male, with about 6 unequal lobes and generally no basal spine. Second antenna as in male, but generally with only about 12 beaded flagellomeres, rarely a few more to a miximum of 15.

Number of body segments, posterodorsal armature, and telson similar to those in male.

Comments. Limnadopsis pilbarensis is most similar to L. tatei . Many features of L. pilbarensis lie within the range of variability seen in L. tatei , including valve size, number of growth lines, rostrum shape and relative size, first antenna lobe number, number of flagellomeres of second antenna, number of body segments, gross structure of claspers, and many features of the telson. However L. pilbarensis is distinctive in its carapace structure: (a) it lacks dorsal carinae, although the dorsal margin is humped where the growth lines meet it, (b) in males the dorsal margin is always markedly curved whereas in L. tatei it is weakly curved or straight, (c) carapace tends to be ballooned in L. pilbarensis but flattish in L. tatei , and (d) the growth lines in L. pilbarensis are particularly clearly visible, being well expressed and generally coloured brown to black on a yellowish carapace background. The dorsal telsonic spines are also different in the two species: although there are similar in number, those in L pilbarensis are subequal and fairly evenly spaced, while in L. tatei they vary much in size and spacing. Also, the anteriormost spine is about 1.5 times the size of the others in L. pilbarensis and 2 times or greater in L. tatei .

Limandopsis pilbarensis cannot be confused with the other species of Limnadopsis besides L. tatei . It is easily distinguished from L. birchii by the much smaller size, fewer body segments, significantly fewer telsonic spines and lack of carinae on the carapace. Though similarly lacking carapace carinae, L. parvispinus is a little larger (> 12 mm) and significantly has more (>13) telsonic spines and more (>11) growth lines than L. pilbarensis . Furthermore, the carapace in L. parvispinus is expanded posteriorly beyond the dorsoposterior corner, but not in L. pilbarensis . Among limnadiids and possibly most Australian branchiopods, the eggs are particularly distinctive with their conical pits and spinous outgrowths.

Types. None designated, though the four dried specimens used to erect this species (Spencer & Hall 1896) would be syntypes, but they are missing. Type locality: Knuckeys Lagoon, Darwin, NT.

Comments. Spencer & Hall (1896) erected this species, noting only that the carapace carinae were not as strongly developed as in L. tatei , and that there were 30–34 growth lines. Their diagram shows only 20 growth lines, and virtually no dorsal carinae. Immediately this presents a major problem, as the diagram and brief description do not match. No specimens are available in any Australian Museum, although Schneider & Sissom (1982) claimed to have found this species in the Kimberley. These specimens are now lost (S. Sissom, pers. comm.) and there is doubt over their identity based on their description of only 20 growth lines (see Richter & Timms, 2005). The author visited the type locality in the wet season (late February, 2007) and was unable to find any specimens, nor later raise any Limnadopsis from dried mud collected from the site. As a further complication, it is just possible the presently described L. multilineata is in fact L. brunneus , based on the written description of the latter. Similarly, and based only on Spencer & Hall’s (1896) diagram, the present L. minuta could be in fact L. brunneus . Hence the animal remains an enigma and therefore is considered a nomen dubium. 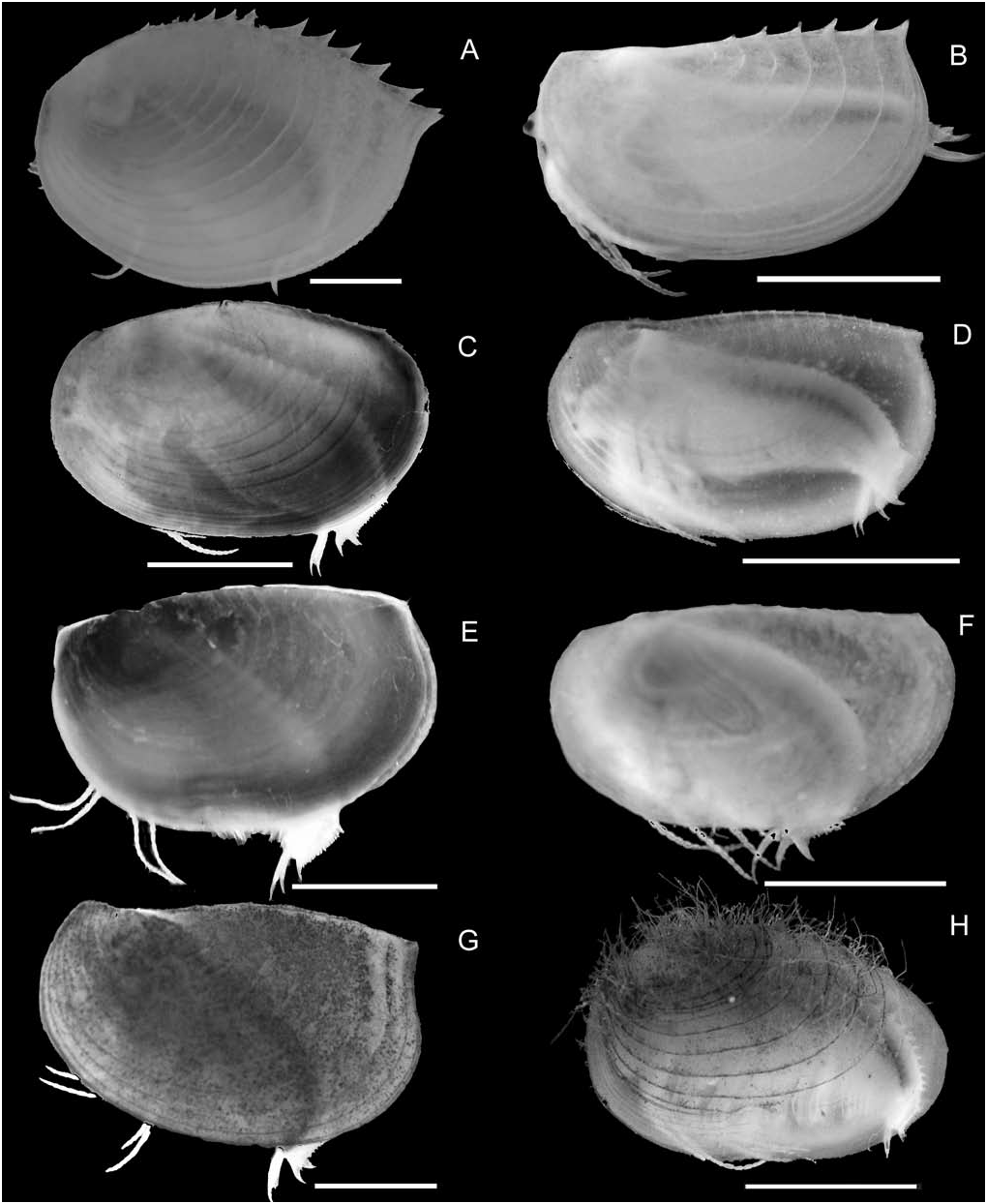