Maxillary outer lobe with four sublobal hairs, maxillary palp simple. Labral formula as 4/5,5,4. Labium with five usual papillae (- Е) and labial formula A1B4C0D4E6, guard chaeta e7 absent, three proximal and four basomedian chaetae. Ventral side of head with 3+3 chaetae. PAO shorter than Ant.I width (0.6-0.8). Ant. I with 11 common chaetae, two ventral s-chaetae (s) and three bms, of which one dorsal long, chaeta-like (this ms was calculated together with common chaetae in first description, 12 at whole); Ant. II with three bms and one latero-distal s; Ant. III with one bms and with six distal s (including two lateral), without additional s-chaetae. Organite pin-like, not very small. Empodial appendage about half as long as Claw. Anterior and posterior furcal subcoxae with 9-14 and 7-8 chaetae, respectively. Male spurs on tibiotarsi 3 thin, stick-like. Th. I-III without ventral chaetae. Ratio manubrium : dens : mucro as 4.4-5.0 : 3.3-3.8 : 1; dens : Claw as 3.3-3.6 (for the typical form).

Bagnallella davidi   is a rather peculiar species of the genus due to few chaetae on dens (vs many more chaetae both on anterior and posterior sides), tridentate mucro (shared with B. mishai   only), and 3+3 postlabial chaetae (vs 4+4 or more in other species). The first description is almost complete and, therefore, we made very few additions concerning mouth parts. The species exhibits high variation in length of macrochaetae and show different modifications of males. All the forms (described below) can indicate either high plasticity of a single species or the complex of separate although closely related species, calling for further morphological, biological, ecological, and molecular investigations.

"Typical " form (Figs 9-11). B. davidi was described in this form (Barra 2001). Macrochaetae on body segments are long. Ratios: Mac on Abd.V as long as 0.7-1.0 of tergal midline. Mac : Abd.V width = 0.7-1.0; Mac : mucro = 3.3-4.1; Mac : dens = 0.8-1.1 (Fig. 9). In Proisotoma complex, so long macrochaetae is a unique character among species of Bagnallella and sometimes occur in the genera Weberacantha Christiansen, Narynia Martynova and Folsomides Stach. This form was found in juvenile and fully adult specimens, both in females and males.

“Short-haired” form (Figs 12-14). Macrochaetae are short, shorter than common chaetae on most abdominal segments. Ratios: Mac : Abd.V Mac on Abd.V as long 0.2-0.3 of tergal midline; Mac : mucro = 0.9-1.4; Mac : dens 0.2-0.3. In spite of their small size, macrochaetae are erect and stiff and so well recognized indicating their possible ecomorphic nature although the integument and mouthparts are not modified. Head and furca appear to be relatively larger than in typical form. Ratio manubrium : dens : mucro as 5.1-6.6 : 4.1-5.8 : 1; dens : Claw as 3.3-4.5. All other significant characters (s-chaetotaxy, mouth parts, chaetotaxy of extremities) are as in typical form. All instars and both sexes can belong to this form.

Each studied population consists of only one of the forms, and we have not found a continuous range of macrochaetae variability, apart from short-haired clasping adult supermales occurring in “normal” populations.

"Spiny supermales" (Figs 23-25). One of the males has a row of spiny p-chaetae on Abd.IV and strong thickened macrochaetae on lateral parts of Abd.VI. Other macrochaetae on the body are weakly developed. Common chaetae on dorsum of Abd.IV-VI curved at apex (Fig. 25). Mandibles without apical teeth and molar plate (Fig. 24). Outer mouth parts (labrum, maxillary outer lobe, and labium) not fully developed. 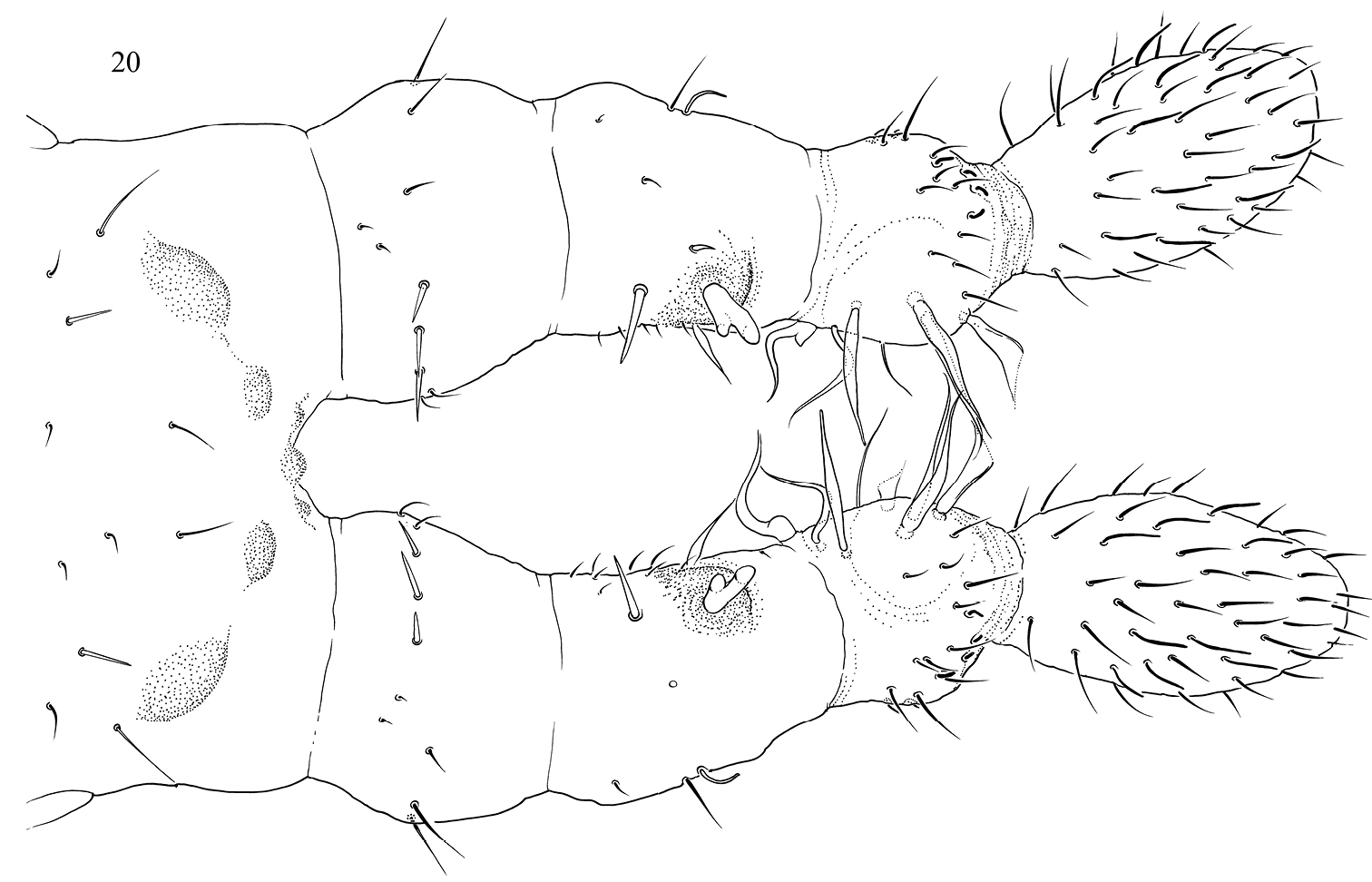 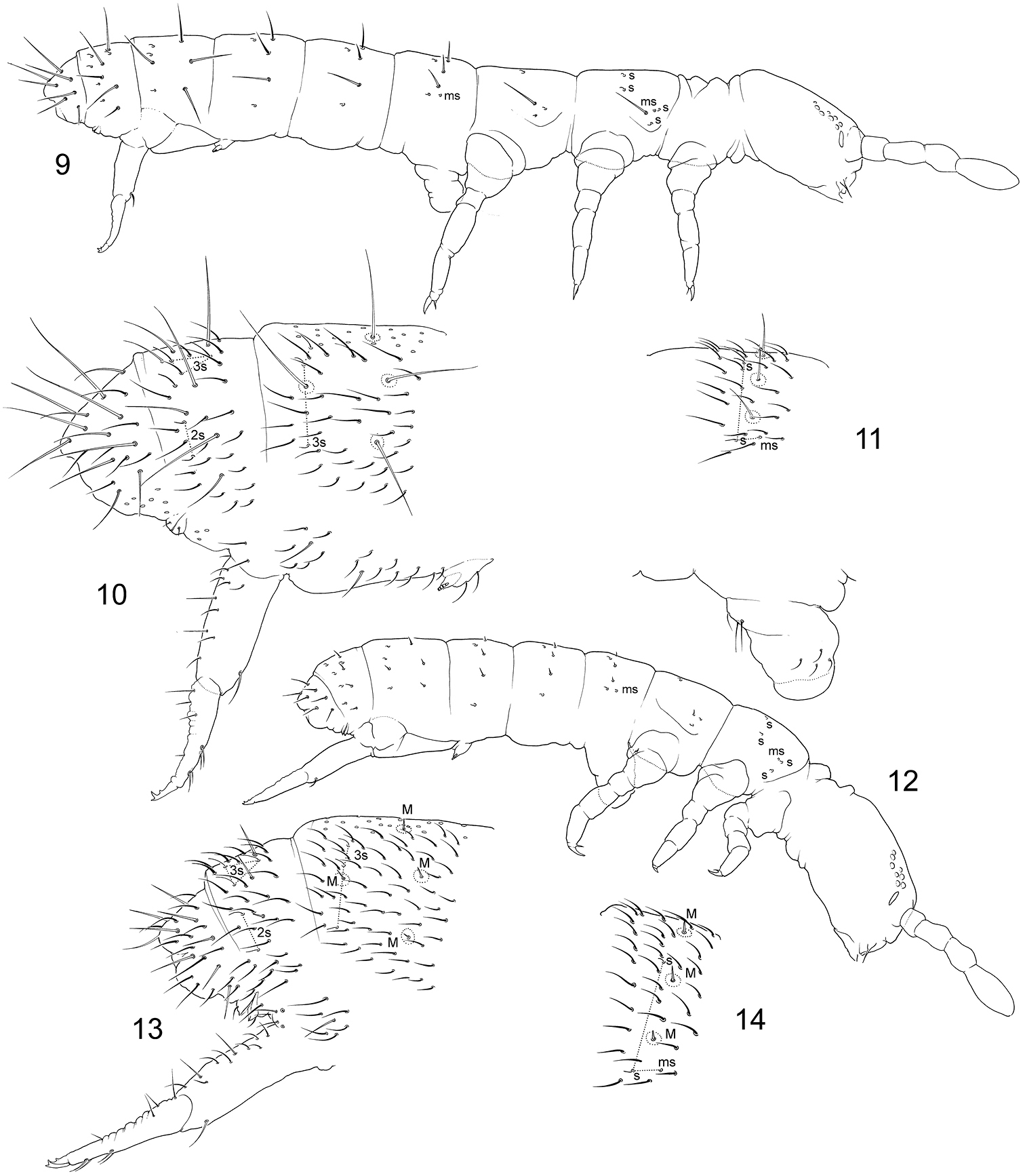 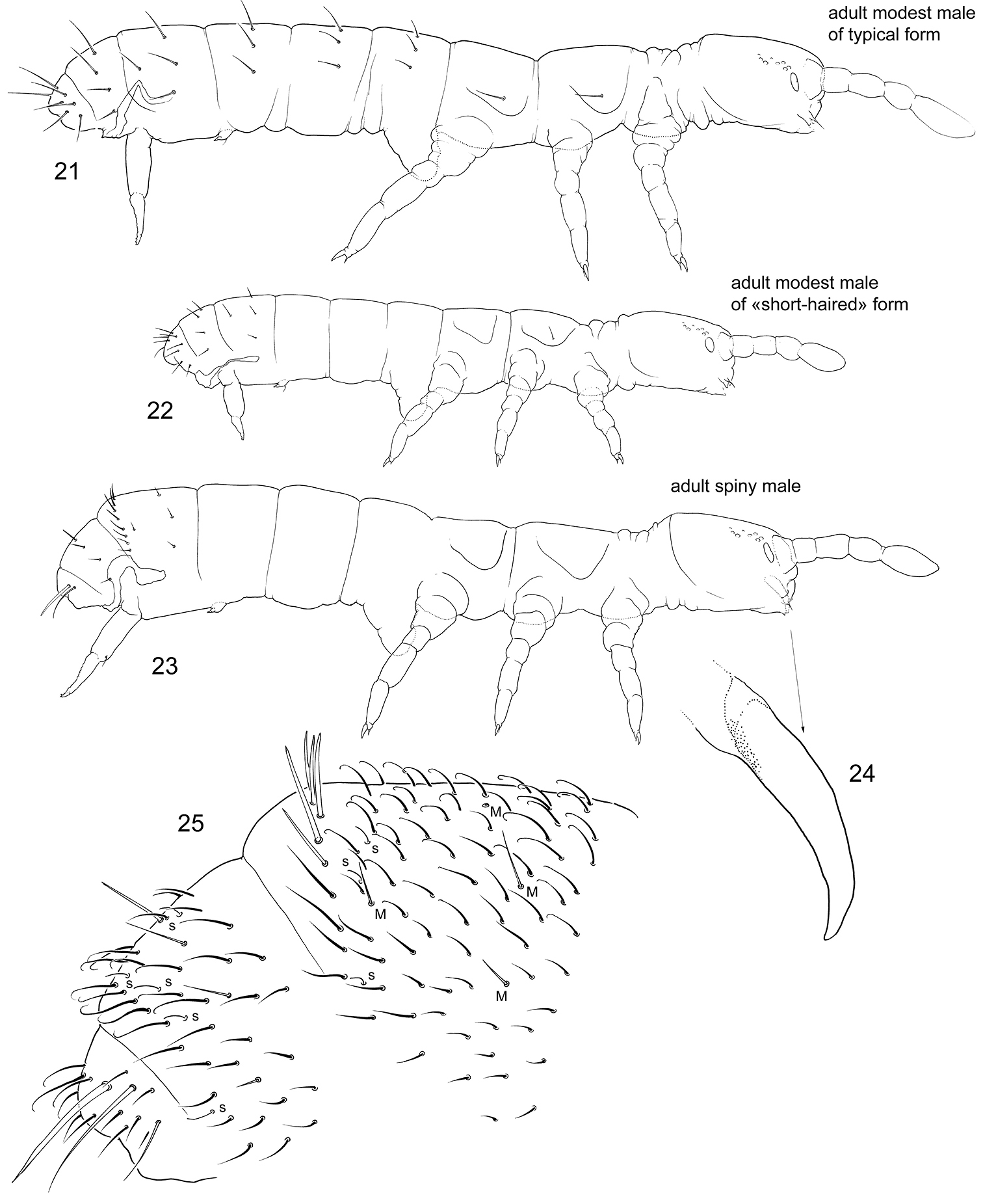