This species was described from Benalla in north-eastern Victoria but occurs widely in South Australia, Tasmania, New South Wales and southern Queensland. It is similar to M. servulus but distinguishable from the latter by its smaller size and more slender shape, by having its elytral interstriae 2 and 4 flat, not costate as the adjacent ones (especially on the declivity, 3 not costate at base) ( Fig. 12 View FIGURES 1 – 13 ), by the elytral setae forming irregular clusters (maculae) and by the depression of the apical abdominal ventrite being much narrower. The female also differs from that of M. servulus in that its tibial uncus is parallel to the tibial edge ( Fig. 6 View FIGURES 1 – 13 ), and the short, broad penis of the male ( Fig. 23 View FIGURES 20 – 23 ) is diagnostic in its apex having a conspicuous pale “lip” and the base of the body a pair of long, thick, complex endophallic sclerites together with a single median one. Melanterius maculatus is somewhat variable, mostly with respect to the degree of impression of its abdominal ventrites, but no distinct and species-diagnostic differences are detectable among populations from different hosts; in particular the penis with its characteristic apical “lip” and basal sclerites is identical in all males ( Oberprieler & Zimmerman, 2001). Clarke (2002) also found no genetic differences between samples from different host plants.

Melanterius maculatus has quite a wide range of host plants. It was collected on Acacia decurrens over a century ago ( Lea, 1899)—the specimens though included in the type series of M. acaciae (see above) —, and in 1930 L. F. Graham collected it on Acacia baileyana in Canberra. In 1976 M. van den Berg , looking for potential biocontrol agents for importation to South Africa , reared the species from seeds of A. baileyana , A. dealbata , A. decurrens , A. elata , A. mearnsii and A. pycnantha in New South Wales. The specimens reared by T. New from seeds of A. baileyana in 1978 and recorded as M. acaciae ( New, 1983) belong to M. maculatus as well (see M. acaciae above). The species was also reared from seeds of A. linifolia and A. terminalis by T. Auld in 1981 ( Auld, 1983, 1989) and from seeds of A. rubida by R. Adair in 1998. Host specificity tests in South Africa have confirmed a wide range of host species for M. maculatus ( Dennill & Donnelly, 1991) . The species was released in South Africa only in 1993 because of the protracted conflict of interest between biological control of invasive weeds and commercial benefit of particularly A. mearnsii , one of its hosts ( Dennill & Donnelly, 1991; Impson & Moran, 2004). Several initial attempts to establish it on A. mearnsii failed, and also later releases of stocks from different localities in Australia yielded poor results ( Table 1 in Dennill et al., 1999), but it finally established at low to moderate levels in some locations ( Impson et al., 2011). The possibility of having released unsuitable or incompatible strains or biotypes of M. maculatus is one of the explanations suggested as reason for this failure ( Dennill et al. 1999). The species was also released in South Africa in 1998 against A. dealbata and in 2001 against A. decurrens , on which its impact by 2011 was considered moderate ( Impson et al., 2011), and in 2003, 2006 and 2008 against respectively A. pycnantha , A. baileyana and A. podalyriifolia , on which its impact was not yet ascertained by 2011 ( Impson et al., 2011). We collected a total of 339 specimens of Melanterius maculatus from the Australian Capital Territory, New South Wales, Queensland, South Australia, Tasmania and Victoria, on 33 species of Acacia ( Table 1). Although many of these records probably represent just coincidental associations, it is evident that M. maculatus has a very wide host range. Ten species ( A. baileyana , A. dealbata , A. deanei , A. decurrens , A. elata , A. mearnsii , A. podalyrifolia , A. pycnantha , A. rubida , A. terminalis ) have been recorded as true hosts, and several others may belong in this category as well ( Table 2). 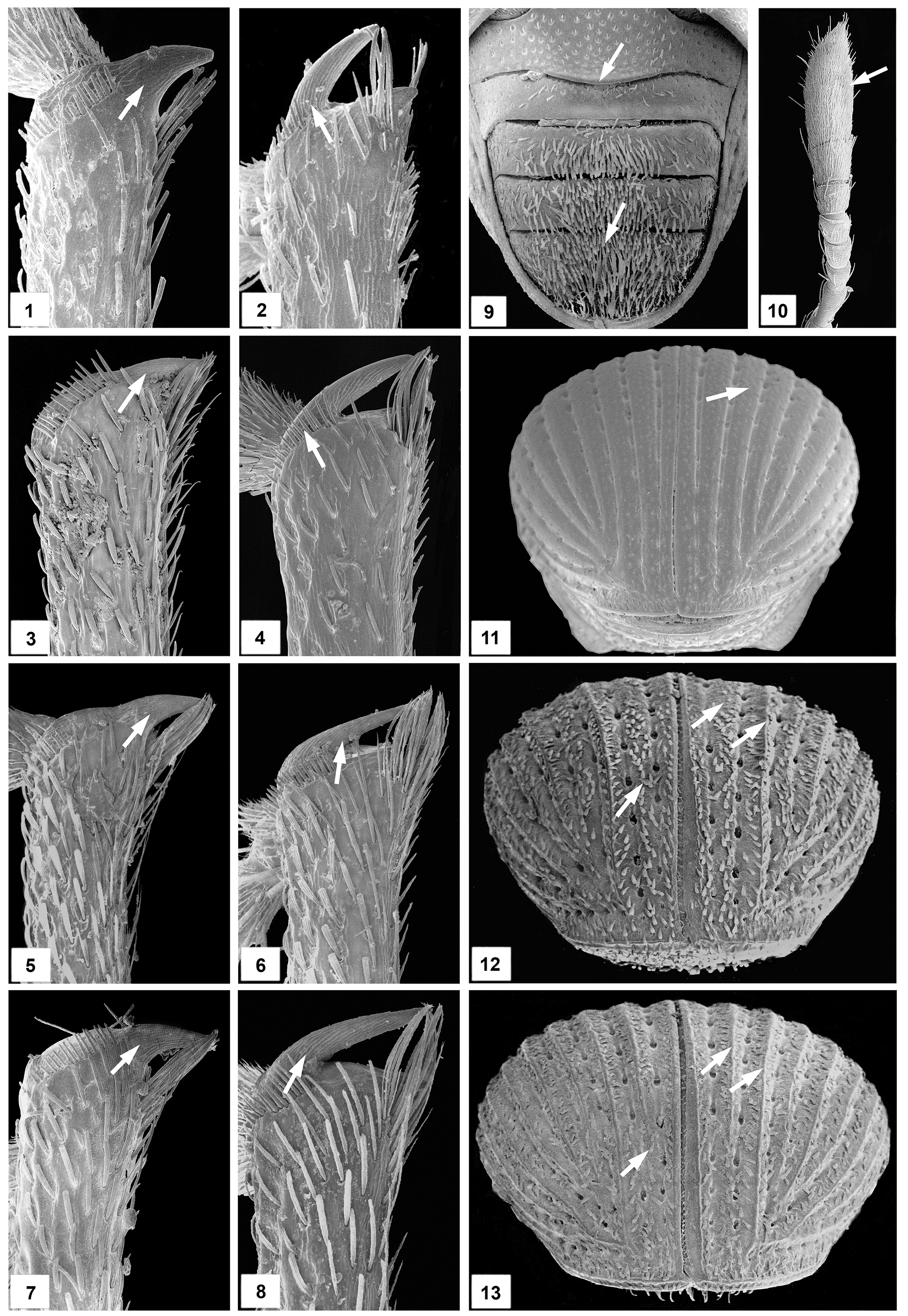