Diagnosis. Interstriae 10 elevated to level of ventrite 3. Protibiae without an additional mesal tooth. Pronotum asperate on anterior half. Vestiture on elytra of erect bristles and fine recumbent setae. Distinguished from S. subcribrosus (Eggers, 1933)   , S. perplexus (Schedl, 1972)   , and S. piliscapus Jordal, 2018   by the characteristic female frons which is centrally flattened and covered by microvestiture, and further from S. piliscapus   by the less setose scapus and the presence of strial setae.

Description female. Length 1.6–1.8 mm, 2.1–2.2 × as long as wide; colour dark brown. Head. Eyes weakly emarginated, separated above by 0.9–1.1 × their width. Frons lightly concave, centrally flattened, surface finely punctured and granulated, with microvestiture appearing cloth-like, margin from just above upper level of eyes to epistoma with a scant fringe of longer setae, shorter and more densely placed setae on epistoma. Antennal club pilose, two procurved sutures weakly indicated. Funiculus 6-segmented. Scapus with 8–10 longer setae. Pronotum strongly reticulated, dull, with small punctures on posterior half spaced by 1–2 × their diameter, replaced on anterior half by distinct asperities. Vestiture consisting of 8 long, erect setae (4-2-2). Elytra smooth, shiny; striae regular, not impressed, punctures shallow, spaced by their diameter; interstrial punctures much smaller, confused, intermixed with and contiguous to strial punctures; interstriae 10 elevated to level of ventrite 3. Vestiture consisting of erect, spatulate interstrial setae, spaced on average by their length. Legs. Procoxae separated by 0.5 × the width of one procoxa. Mesocoxae separated by 0.8 × the width of a procoxa. Protibiae narrow, inflated and with many long setae on posterior face, distal tooth 1 and 2 of equal size, with 5–8 additional small granules along the edge and on the posterior face; protibial mucro curved posteriorly. Meso- and metatibiae with 6–7 lateral socketed teeth on distal half and third, respectively. Ventral vestiture. Setae on mes- and metanepisternum and metasternum simple.

Key ( Wood 2007). Keys to couplet 49, S. amoenus Wood, 1967   , but substantially differs by having rows of interstrial bristles and strial recumbent setae, and by the lack of an impunctate, shiny area in central part of the female frons. This species is closely related to S. subcribrosus   , which in the key is placed with species having an additional mesal tooth on the posterior face of the protibiae, and a short interstriae 10. Scolytodes subcribrosus   does not have these character states and should have been placed closer to S. amoenus   .

Etymology. The Latin name bisetosus   is composed by the prefix bi -, meaning two (kinds of), and setosus, a masculine nominative adjective meaning bristly, referring to the bristle-like interstrial setae, and very fine and shorter strial and interstrial setae on the elytra.

Biology and distribution. Only known from the type locality in the Ecuadorian Amazon rainforest. The holotype was collected by canopy fogging. 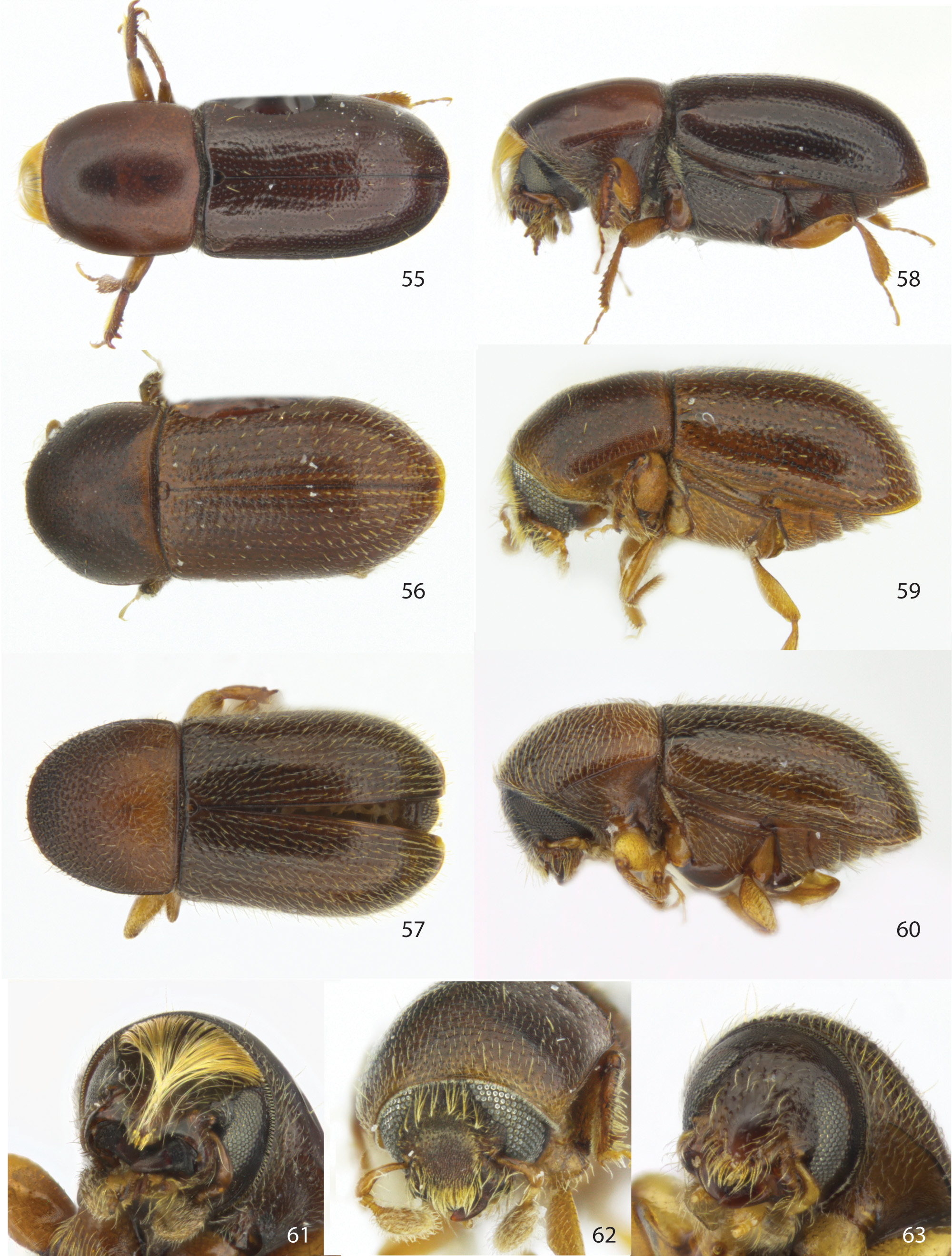