There are about 20 species of jewel beetles in the genus Capnodis  and these are found in the warmer parts of the Western Palaearctic region. They are handsome beetles, often coloured black and grey or white, although some metallic forms also occur. They are known as flat-headed borers and some are important pests of fruit trees. The presence in Arabia ( Kuwait and eastern Saudi Arabia) of one species of this genus has been indicated by Walker and Pittaway (1987). It is Capnodis excisa Menetries. This  species actually has two subspecies, the nominate one is widespread, being found in Turkey and Central Asia, whilst C. excisa alfierii Thery, 1929  is known from the Middle East. It differs from ssp. excisa  amongst other things by the more subdued white markings on its elytra. There are apparently only two published records of this species from Saudi Arabia; four specimens that were collected by Pitcher at Ain Dar and two others from near Abqaiq found by the same collector in the Eastern Province of Saudi Arabia ( Bilý 1985). All of the specimens were donated by Pitcher to the Manchester Museum, along with copious other entomological specimens.

The foodplants of C. excisa  include Calligonum  and Haloxylon  and MG conducted extensive searches for the beetle on these plants in the UAE during the 1990’s, but without success. The beetle is present, however, in the UAE since in November 2008, a specimen ( Fig. 3View Figure 3) was found amongst other beetles and insects in the old collection of the Abu Dhabi chapter of the ENHG, which had been transferred to Al Ain for amalgamation with the insect collection of the Al Ain chapter.

Interestingly, during the preparation of this article, further evidence for the presence of this beetle came to light during an internet search. A photograph of the beetle, correctly identified, taken near Shiba in Dubai Emirate appeared in the online edition of the Abu Dhabi ENHG newsletter Focus for November 2007 (ENHG 2007). Even more interesting was the cover photograph purporting to show Julodis euphratica  , but which actually shows a different species, which is almost certainly J. candida  . If this is correct, then this is the only known photograph of this species and is remarkable in that it not only shows the creamy white pulverulence mentioned above, but also orange-yellow longitudinal stripes along the centre of the pronotum and along the margins of the elytra that are not obvious either in the dead insect (Fig. 1) or the original description by Holyński (1996).

Careful examination of old insect collections will continue to add new species to regional faunas and even to science along with valuable data on distribution, biology and ecology, making them resources that need to be curated to a high standard. However, in parts of the world where the entomofauna is still incom- pletely known, it is not enough to sit back and view such collections as the only resource available for improving knowledge. Continued new collecting by amateur and professional naturalists alike is still required, perhaps as never before as human encroachment on wild habitats increases exponentially. If such collecting stops or slows down, then it may be too late when it restarts to record tomorrow, the complete biodiversity that exists today.

In the UAE, there is an ongoing privately-funded programme aimed at producing an inventory of arthropod species within the country and the first volume of new records has been published, recording over 500 new species to the UAE in just over three years of study ( Van Harten 2008). It would be easy to assume that such a programme will result in the discovery and recording of every species present in the seven emirates. On the world scale, the UAE is a small country, but in terms of collecting insects, it represents a territorial immensity to be covered by a handful of personnel and a few malaise and light traps. Along with van Harten’s volume, a further publication pulls together data from the literature, along with the author’s records and unpublished national data that resides in the collection of the Environment Agency – Abu Dhabi ( Howarth and Gillett 2008). Combined with van Harten’s records, more than 2000 species of insects are currently known to occur in the UAE, and this very likely is only a fraction of what actually occurs. This effectively means that there is still a place for private collecting either by individuals or by non-government organizations in the UAE. Some recent captures of rare insects, not just beetles, but true flies and neuropterans, by BH and other members of the ENHG illustrate this point. 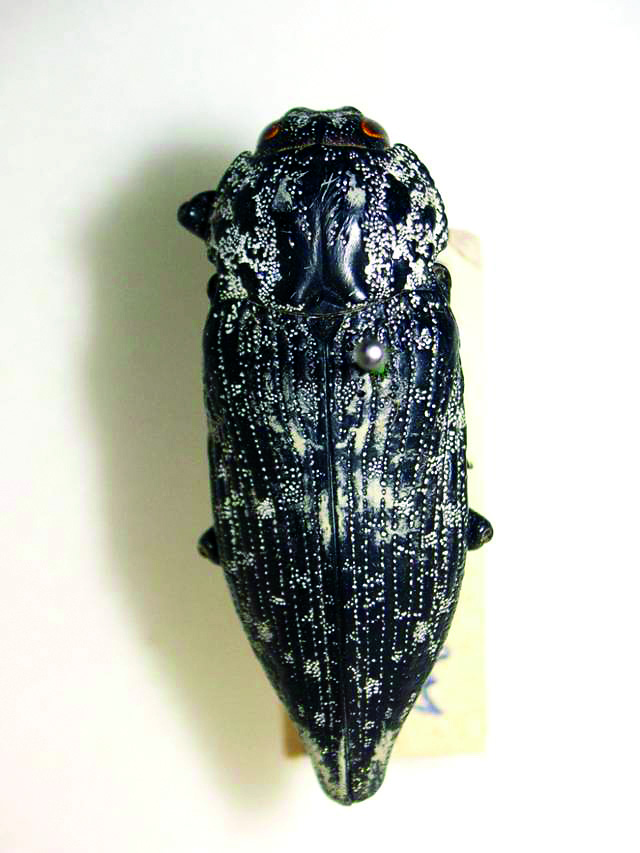 Figure 3. The flat-headed borer jewel beetle, Capnodis excisa. This specimen was collected by J. N. B. Brown in the Madam area, UAE; originally in the Abu Dhabi Collection, it is now housed in the JAAEN- HG Insect Collection in Al Ain (photograph by B. Howarth).