Ameiva nodam sp. nov. can be distinguished from all other described mainland congeners except for A. bifrontata and A. concolor by having a transversely divided frontal plate. From the latter two it differs in the color pattern and from A. concolor also by having the postbrachials dilated.

Especially due to the color pattern of female specimens with five longitudinal yellow dorsal stripes on a brown ground color the new species resembles Medopheos edracanthus , a teiid species that was just recently split of the genus Ameiva and is now considered as being monotypic. It differs from this species by having the frontal plate divided, by lacking preanal spurs and by having 10 instead of 8 longitudinal rows of enlarged ventral scales.

Coloration of holotype: In life ( Fig. 2 View FIGURE 2 A), the dorsal surface of the head of the male holotype is grayish-brown. The sides of the head are gray. The granules on the eyelids are white to grayish-white. Suboculars and adjacent supralabials are lighter gray than the scales in temporal region, anterior supralabials, postnasal and loreal. Supraciliaries grayish-green. Head ventrally white to grayish-white. Dorsal surface of body reddish-brown; five yellow stripes 2–3 scales in width in anterior part and 4–5 scales in width in posterior part, extending from the head to the base of the tail, one vertebral stripe beginning behind the interparietal, a dorsolateral stripe on each side beginning in the supraciliary region, and a lateral stripe beginning in the anterior upper edge of the ear opening (and being interrupted by the opening); in the posterior part the vertebral stripe is bordered on both sides by an irregular dark blackish-brown line, starting from behind the insertion of the forelimbs, very soft in the beginning and becoming up to four scales in width in direction of the base of the tail; ground color interspaces irregularly intermixed with some blackish-brown granules. Lateral body parts between armpit and groin gray with eleven small turquoise dots (4–6 granules big) arranged in a dotted line. Outermost ventrals gray, first three outer rows of ventrals with an irregular pattern of turquoise dots distinctly larger than the turquoise dots of the lateral row. Central rows of ventrals white. Forelimbs grayish-brown dorsoposterior region and brownish-gray in anteroventral region. Hindlimbs grayish-brown in dorsoposterior region, intermixed with some small dark and larger pale white spots; brownish-gray in anteroventral region. Tail brown with dark spots in anterior third, a lateral dark stripe extends from behind the hind limbs over the first sixth of the tail, adjacent and below to it is a white stripe of almost the same length. Subcaudals white.

In preservative ( Fig. 2 View FIGURE 2 B), the general dorsal color is mainly brown or grayish-brown; five dorsal stripes are gray to grayish-brown; interspaces between dorsolateral and lateral stripes are dark brown; dots between armpit and groin are pale blue. Remaining body parts are of the same pattern and coloration as in life.

Arrangement, shape and surface of scales as in holotype except for the following variations: Rostral in posterior part right-angled or nearly so. Frontonasal pentagonal or hexagonal. Prefrontals laterally contacting first supraciliary in most specimens, separated from it by the first supraocular and/or the loreal in some specimens. Median suture of prefrontals as short or slightly longer than that between supranalsals. Frontoparietals, posteriorly contacting interparietal and adjacent parietals in most specimens, some individuals with a small medial scale between the posterior suture of the frontoparietals and the interparietal. Interparietal subequal, with or without a short medial suture in anterior part; slightly narrower or slightly wider than adjacent parietals, sutures with parietals slightly oblique or straight; outermost parietals subequal or slightly smaller (rarely larger) to inner parietals. Parietal series normally composed of 5 (4 in one specimen: ZFMK 90862) scales including interparietal. Supraoculars three or four at each side, fourth much smaller than others, third supraocular largest. Circumorbital semicircle formed by 4–14 scales at left side, 8–27 scales combining both sides, bordering posterior edge of fourth (if present) and third supraocular and separating it from frontoparietals by more than half, not extending to anterior margin of third supraocular. Last supraocular separated from parietals by 2–4 rows of circumorbital scales. Laterally, all supraoculars except first separated from supraciliaries by a single or double row of small scales; 21– 34 combining both sides. Supraciliaries 5–7 (on one side). Loreal very large, single, in contact with postnasal, frontonasal, prefrontal, first supraciliary, prefrontals, first subocular, second and third and occasionally fourth supralabials and in few specimens with first supraocular. Preoculars normally one, two or three in some specimens. Postoculars small, in two rows, first consisting of 3–5 and second of 3–4 scales. Enlarged supralabials five or six (mostly six), second, third and fourth largest; followed to commissure of mouth by 4–7 small scales. Five to eight slightly enlarged supratemporals distinguishable or not from other scales. Postmental followed by three to 6–8 pairs of enlarged chinshields. Enlarged infralabials 5–7; followed to commissure by 5–8 smaller scales. 165–216 (195 ± 14.67, n = 15) DL; 86–113 (95 ± 7.64, n = 12) DOM. Ventrals in ten longitudinal and 28–33 (30 ± 1.41, n = 60) transverse rows; ventrals of outermost longitudinal row smaller than other ventrals, very small in some specimens. Preanal shield with 2–3 rows of enlarged scales. Postbrachials dilated. 10–19 (16 ± 1.88, n = 36) FP; hardly or even not visible in some female and juvenile specimens. 27–32 (29 ± 1.86, n = 12) SCF. In males, a cluster of 2–3 rows, each of about 3–6 sharply mucronate scales are positioned along the postaxial edge of the distal end of the shank; females and juveniles without such tibiotarsal spurs. 13–19 (16 ± 1.32, n = 59) LFF, 25–35 (31 ± 2.08, n = 60) LFT.

In preservative, the general dorsal color is mainly brown or grayish-brown; five dorsal stripes are gray to grayish-brown and less contrasted to ground color interspaces than in living individuals; interspaces between dorsolateral and lateral stripes of most males and females dark brown or blackish; ground color of juveniles dark brown or blackish; tail of juveniles grayish-blue in posterior part; dots of males between armpit and groin pale blue; dilated scales on forelimbs brownish-gray on hindlimbs bluish-gray; outermost rows of ventrals grayish-blue to blackish-blue. Remaining body parts are of the same color as in life.

Etymology. The specific epithet is an agglutination of the exclamation “no dam”. We chose this peculiar name to protest against the possible dam construction activities for four hydroelectricity projects along the Marañón river, between the Regions of Cajamarca and Amazonas. With this we are trying to call attention to the fact that the unique dry forest habitat of this and other endemic species, several of them have only recently been discovered (Koch et al. 2006, 2011; Venegas et al. 2008), is gravely threatened by human interventions.

This new species is endemic to the Equatorial Dry Forest ecoregion (Brack 1986), a habitat which receives less than 500 mm of annual rain fall (Duellman & Pramuk 1999).

Individuals of this species were found moving quickly on the ground in low vegetation during daytime or sleeping under stones during nighttime. Air temperature during the active hours of the species was between 31.3 °C and 40.8 °C, substrate temperature of the ground was between 32 °C and 46.2 °C. Ameiva nodam sp. nov. was found in the same habitat together with the tropidurid lizard Microlophus stolzmanni . FIGURE 2. Male holotype of Ameiva nodam sp. nov (CORBIDI 1870) from Bellavista, Cajamarca, Peru in dorsal (A) and ventral (B) view; adult female paratype from Bellavista, Cajamarca, Peru (C); and juvenile paratype (ZFMK 88736) from Bagua Chica, Amazonas, Peru (D). Please note: the depression on the back of the holotype is a bone fracture, which was accidentally caused when the animal was captured.

FIGURE 2. Male holotype of Ameiva nodam sp. nov (CORBIDI 1870) from Bellavista, Cajamarca, Peru in dorsal (A) and ventral (B) view; adult female paratype from Bellavista, Cajamarca, Peru (C); and juvenile paratype (ZFMK 88736) from Bagua Chica, Amazonas, Peru (D). Please note: the depression on the back of the holotype is a bone fracture, which was accidentally caused when the animal was captured. 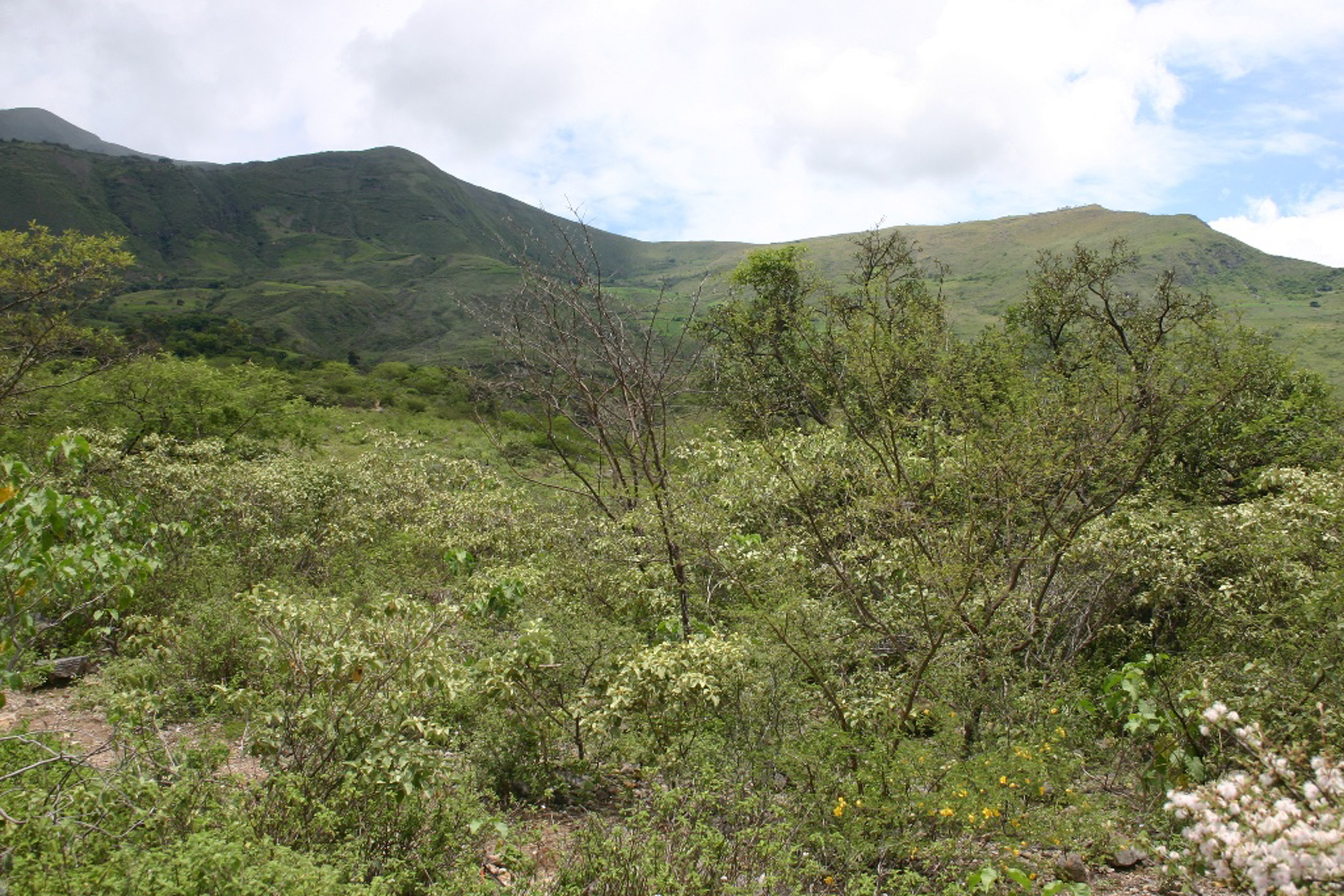