This new variety differs from the other varieties ( Crataegus monogyna Jacq. var. monogyna   and Crataegus monogyna var. lasiocarpa   (Lange) K.I.Christ.) sensu Christensen (1992) by its orange fruit colour in contrast to red fruits in the former.

flowering in May and fruiting in September-October.

in openings of Pinus nigra   forest.

(Figure 3 View Figure 3 ). Crataegus monogyna var. odemisii   is endemic to İzmir; it has a narrow distribution at Gölcük.

The epithet of this new variety denotes the collection area, Ödemiş.

Crataegus monogyna var. odemisii   should be assigned to "Critically Endangered", (CR B2ab(i,ii,iii,iv), D) according to the IUCN (2017) threat categories. The area of occupancy is estimated to be less than 10 km2 and the examined specimens are known only from alongside the road. The location is close to the picnic area of the Gölcük Lake and is under threat from fire, cutting and other anthropogenic effects.

Two new varieties have been published by Browicz (1972) from Turkey under the species name of C. aronia   L. These two varieties were reduced to synonym by Christensen (1992) with their published name and he accepted the name Crataegus azarolus   instead of C. aronia   . Taxonomic decisions of Christensen have been based solely on herbarium material. During the taxonomic revision of the genus Crataegus   , the first author had the opportunity to observe these varieties in their habitats alongside the complete set of morphological variations of the species. Moreover, morphological studies on the large set of herbarium material in the above-mentioned herbaria and fieldwork from Greece to Iran provided more opportunity to observe all kinds of variation of C. azarolus   and the closely related taxa. Consequently, based on field observations and herbarium studies on the collected materials, these two varieties, namely Crataegus azarolus L. var. dentata   (Browicz) Dönmez and Crataegus azarolus L. var. minuta   (Browicz) Dönmez should be accepted as distinct taxa and they should be given as new combinations under the species name of Crataegus azarolus   .

Crataegus monogyna   is one of the most polymorphic species amongst the Eurasian Crataegus   taxa with respect to leaf morphology and indumentum. Due to local variations of the species and species concepts by the authors who studied Crataegus   , many new taxa have been described. In addition, new combinations and alteration of their status have been made. Based on these taxonomic and nomenclatural novelties, both taxonomic and nomenclatural synonyms of about 200 names have been listed by Christensen (1992). In C. monogyna   , extensive variations in leaf morphology and indumentum are present, whereas variations in fruit colour are limited. Fruit colour of C. monogyna   is clearly red and/or with degrees of red. Specimens of the new variety, C. monogyna var. odemisii   are yellow. Red and various degrees of red colour for fruit of infraspecific C. monogyna   taxa have been observed by the second author and they have hundreds of representative specimens for these fruit colours in the above-mentioned herbaria. According to observations on the fruit colour of single pyrened Crataegus   taxon, it is a constant character and unique in the infraspecific taxa of C. monogyna   . Hence, it is worthwhile accepting this population as a separate taxonomic status, as a variety.

Crataegus yaltirikii   Dönmez is a recently described new species from southeast Turkey and we found a new population of the species on the Taurus Mountain ranges, nearly 400 km away from the type locality. Climatic conditions of these two localities are different; the type locality is a cold and snowy area, whereas the recently discovered locality is characterised by hot and dry summers, rainy and warm winters. We have not yet obtained molecular works on these disjunct populations. Besides this, we assume that these populations should be local ecotypes of the species. 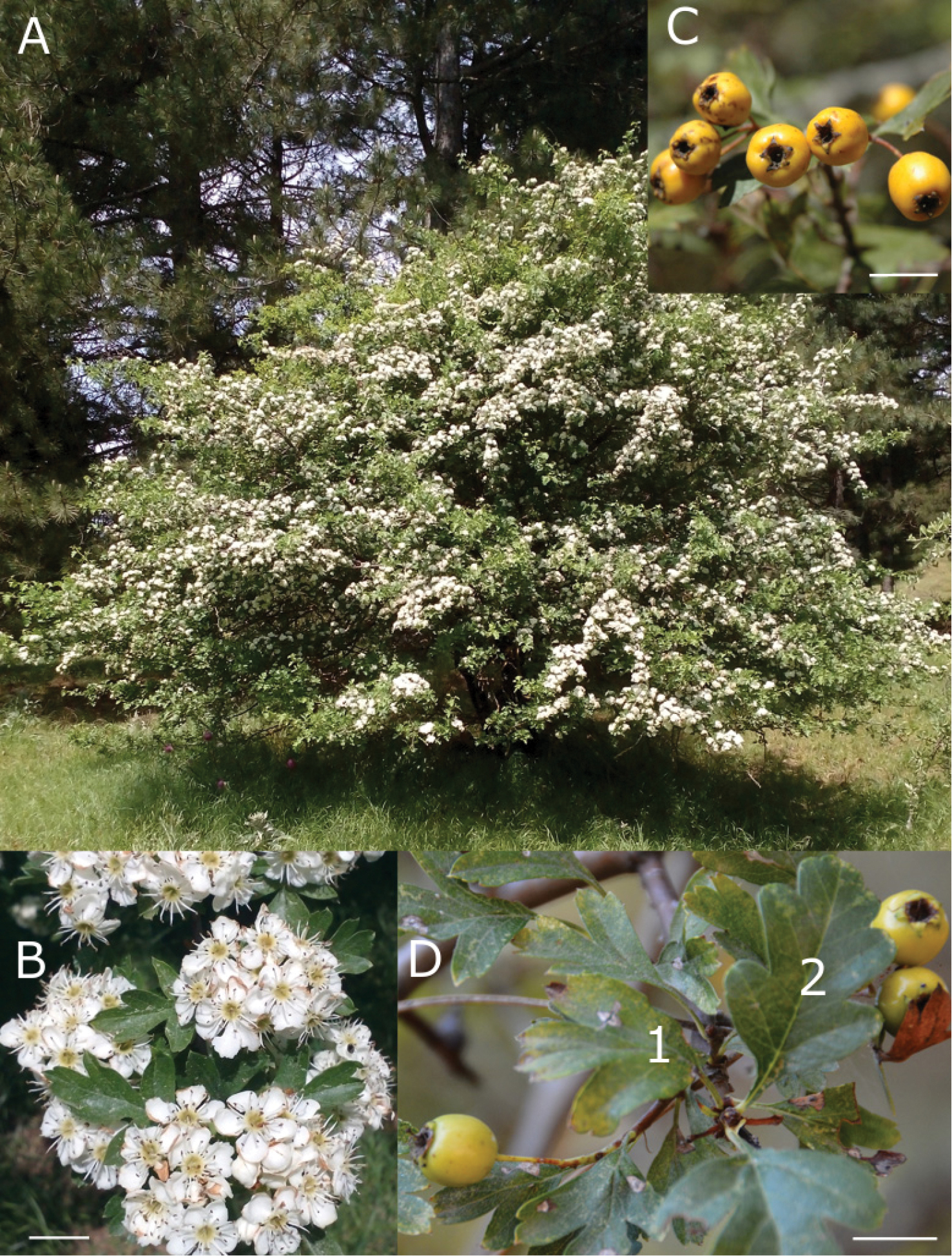 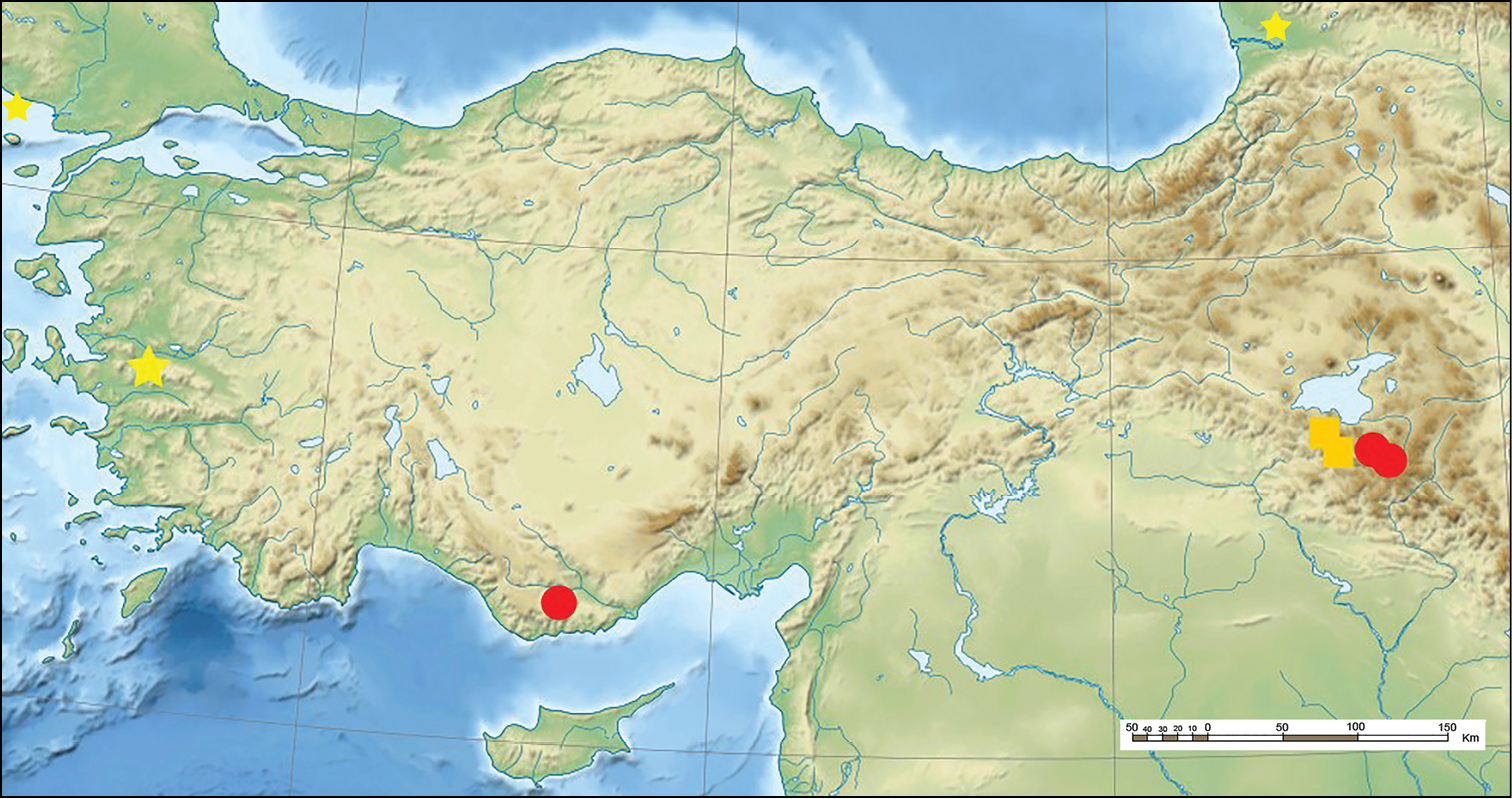