Diagnosis. The dark gray pectoral fins combined with the bright blue iridescence in males distinguishes A. paucisquama   from other species of the genus Austrolebias   , except from those of the A. alexandri   species-group. The fewer scales around caudal peduncle (12 vs. 16 or more) and the fewer dorsal-fin rays in males (17-21 vs. 20 or more in A. litzi   and A. nigripinnis   ; 21 or more in A. affinis   , A. alexandri   , A. cyaneus   , A. juanlangi   and A. luzardoi   ; 22 or more in A. duraznensis   , A. ibicuiensis   , A. paranaensis   , A. periodicus   ) distinguish A. paucisquama   from other species of the A. alexandri   speciesgroup. The lack of contact organs on the inner surface of the pectoral fin in males and the color pattern of females – ground color light brownish, sides of body with a variable number of relatively large dark black spots distributed mostly on posterior portion of body – distinguish A. paucisquama   from all other species of the genus.

Habitat. The type locality consists of a small temporary pool located close to the BR290 highway, and distant from any permanent freshwater flow in the altitude of 154 m ( Fig. 5 View Fig ). The specimens of Austrolebias paucisquama   were the only group, by sharing the apomorphic bright blue iridescence and pectoral fins dark gray in males. However, A. paucisquama   is easily distinguished from all species of the genus by the lack of contact organs in the pectoral fins of males, the reduced number of scales around caudal peduncle, the reduced number of dorsal-fin rays in males and the color pattern of females.

Most Austrolebias   species inhabit lowlands and inundated areas adjacent to permanent waters, in altitudes usually lower than 150 m ( Costa et al., 2004). These species seem to have larger areas of distribution (e.g. A. alexandri   , A. elongatus   , A. gymnoventris   , A. luteoflammulatus   , A. monstrosus   , A. prognathus   , A. vazferrerae   , A. wolterstorffi   , see Costa, 2006). So far A. paucisquama   has been recorded only from a temporary pool, without the proximity of a permanent water flow, in the altitude of 154 m and close to an area of extensive use as pasture. This situation places the new species as a critically endangered species of Austrolebias   .

fishes collected in two collecting efforts in September 2004 and June 2005, corresponding to winter and autumn in the southern hemisphere. Maximum depth observed was 50 cm. The environment was almost completely covered with emergent vegetation, serving as cattle pasture.

Etymology. From the Latin “ pauci ” meaning few, and “ squama ” meaning scales, in reference to the reduced number of scales around caudal peduncle. A name in apposition. 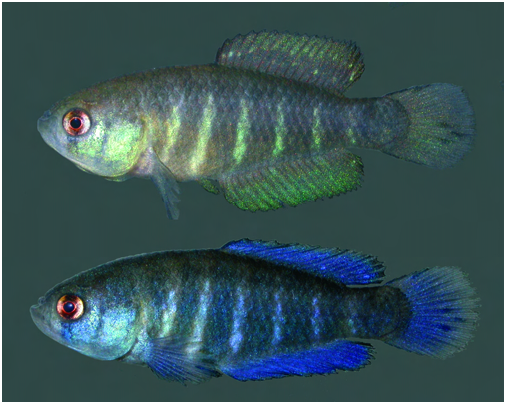