The new species differs from A. colchicifolium by its taller scape (18–30 cm, not 4–6 cm), leaf length shorter than scape (not much longer than scape), margin of tepals entire (not obtuse or subacute with cucullate apex, upper margins denticulate-serrate), and filament entirely white (not purplish basal and fading to white upper part).

Flowering time: —from April to May.

Fruiting time: —from May to June.

Etymology:— The new species was named in honour of Murat Özel who provided significant assistance during the field work and collected the specimens.

Suggested Turkish name:— The Turkish name of this species is suggested as “Azizabdal Soğanı” according to the guidelines of Menemen et al. (2013).

Distribution, habitat and ecology:— A. muratozelii is only known from Tunceli in the Eastern Anatolia. It grows on slopes of limestone bedrock with other plants typical of the Irano-Turanian steppe vegetation. It particularly prefers oak openings.

Conservation status: — Allium muratozelii is a species endemic to a restricted area of Turkey, being only known from two locations. According to the observations and field studies, its extent of occurrence (EOO) is less than 20 km 2 with the number of mature individuals being less than 250 (criteria B2 ab (i, iii) of IUCN 2012), and the area of occupancy (AOO) is less than 10 km 2. Due to a planned construction of a dam within the distribution area of the new species, the area of occupancy will be soon further narrowed. A second location of the new species is under threat due to mining activities. For these reasons, the quality of habitat may be deteriorated or vanished, and the number of individuals in populations may decrease accordingly. Therefore, the conservation status of the new species is assessed as CR (Critically Endangered) based on IUCN criteria ( IUCN 2012).

Seed morphology: —The seeds of Allium muratozelii have a broadly ovate-oblong shape and a slightly wrinkled surface. Seed size is 2.48–3.14 × 1.55–2.35 mm, and the range of the L/W ratio is 1.18–1.90. These seeds show suborbicular to elliptic testa cells as the dominant shape, S- to omega-like strongly undulated anticlinal walls, and many convex variably sized verrucae on the periclinal walls ( Figs. 3, 4 View FIGURE 4 ). The seed characters have provided beneficial systematic contributions at various taxonomic level in the genus Allium ( Celep et al. 2012, Lin & Tan 2017). Allium muratozelii shows the general seed micromorphology characteristics found in species of the section Melanocrommyum .

Allium colchicifolium is morphologically similar to A.haussknechtii Nábělek (1929: 37) and A.straussii Bornmüller (1911: 515) , which were previously treated as its synonyms ( Wendelbo 1971 - 1985, Kollman 1984). Nevertheless, A. haussknechtii differs from A. colchicifolium by having a funnel-shaped star-like perigone with oblong-lanceolate, acute tepals with entire margins, and whitish-green filaments, whereas A. straussii , which is known from western Iran, differs by its leaves, usually two and dimoprhic in size (outer leaf 18 × 8 cm, inner leaf ca. 10 × 2.5 cm), with shallow broad ribs, lanceolate to narrowly ovate, concave, obliquely sideward directed, and after anthesis longitudinally convolute and stiff tepals. Because of these distinct morphological features, Fritsch & Abbasi (2013) resurrected both A. haussknechtii and A. straussii . The new species, A. muratozelii , on the other hand, differs from all these three species by its leaf shape, tepal margin, and scape length. Detailed morphological differences/similarities between A. muratozelii and A. colchicifolium are summarized in the diagnosis and Table 1. 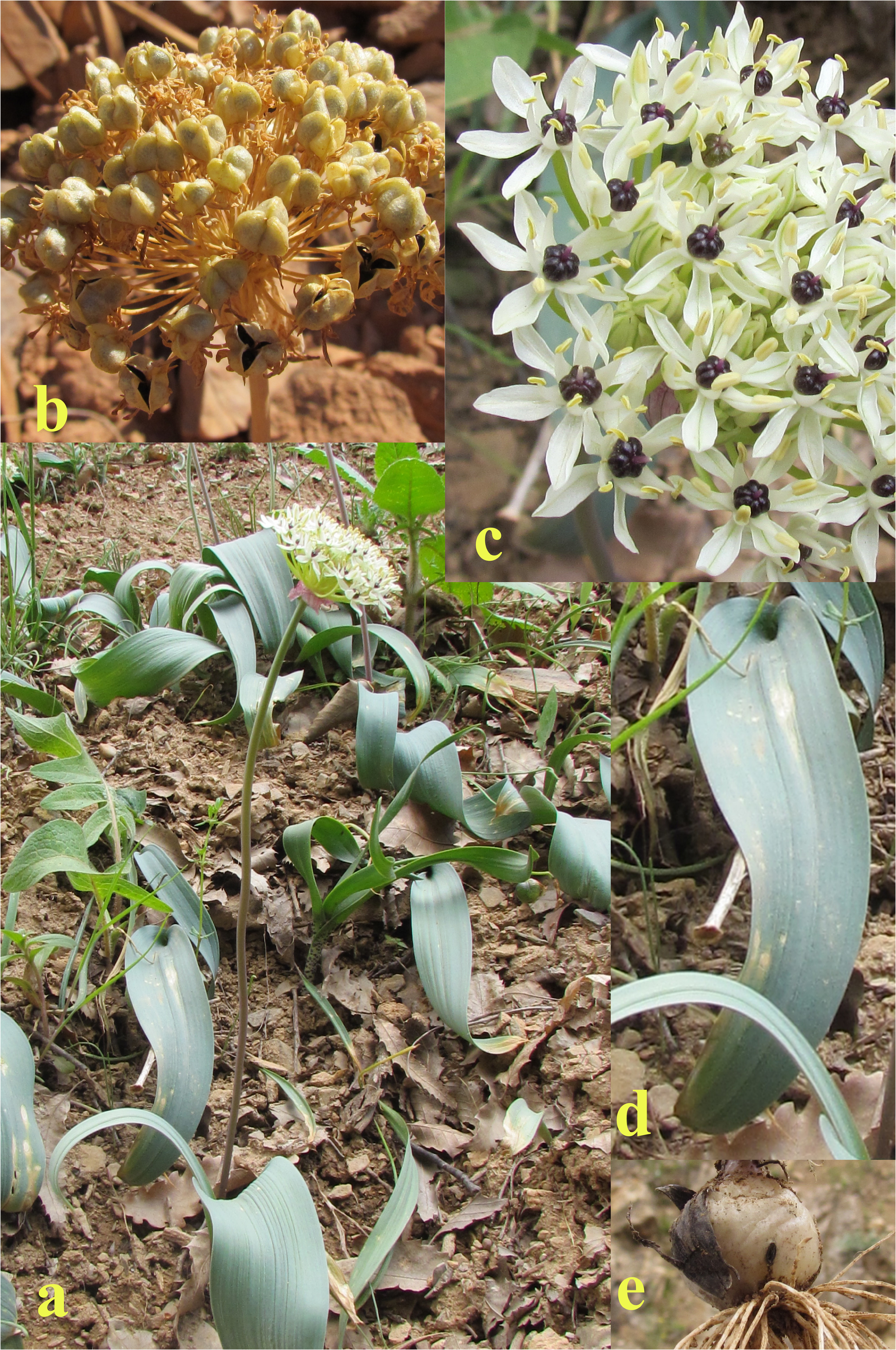 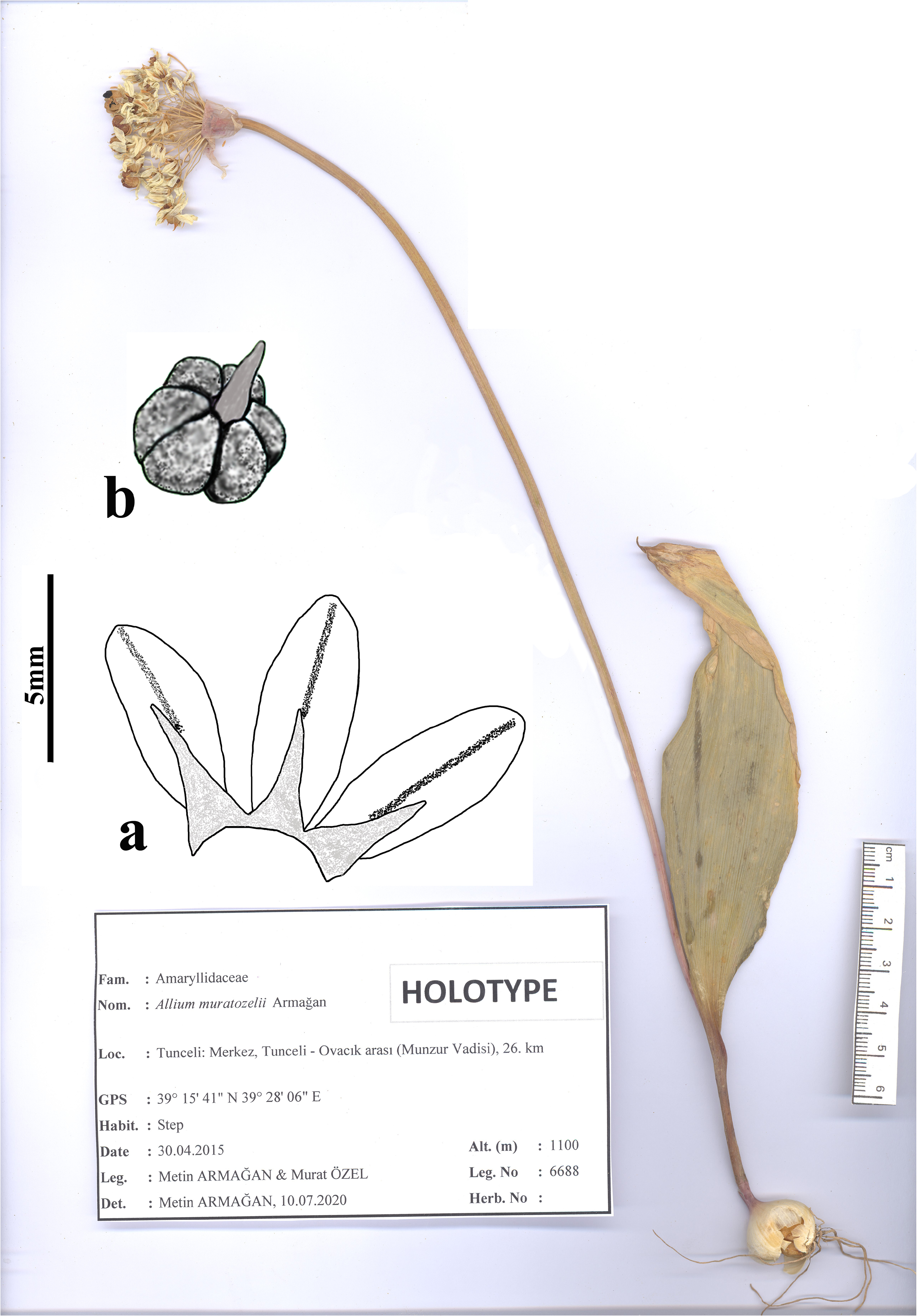 FIGURE 2. Holotype of Allium muratozelii (KNYA-26923!), and drawings of a) tepals and filaments, and b) pistil. 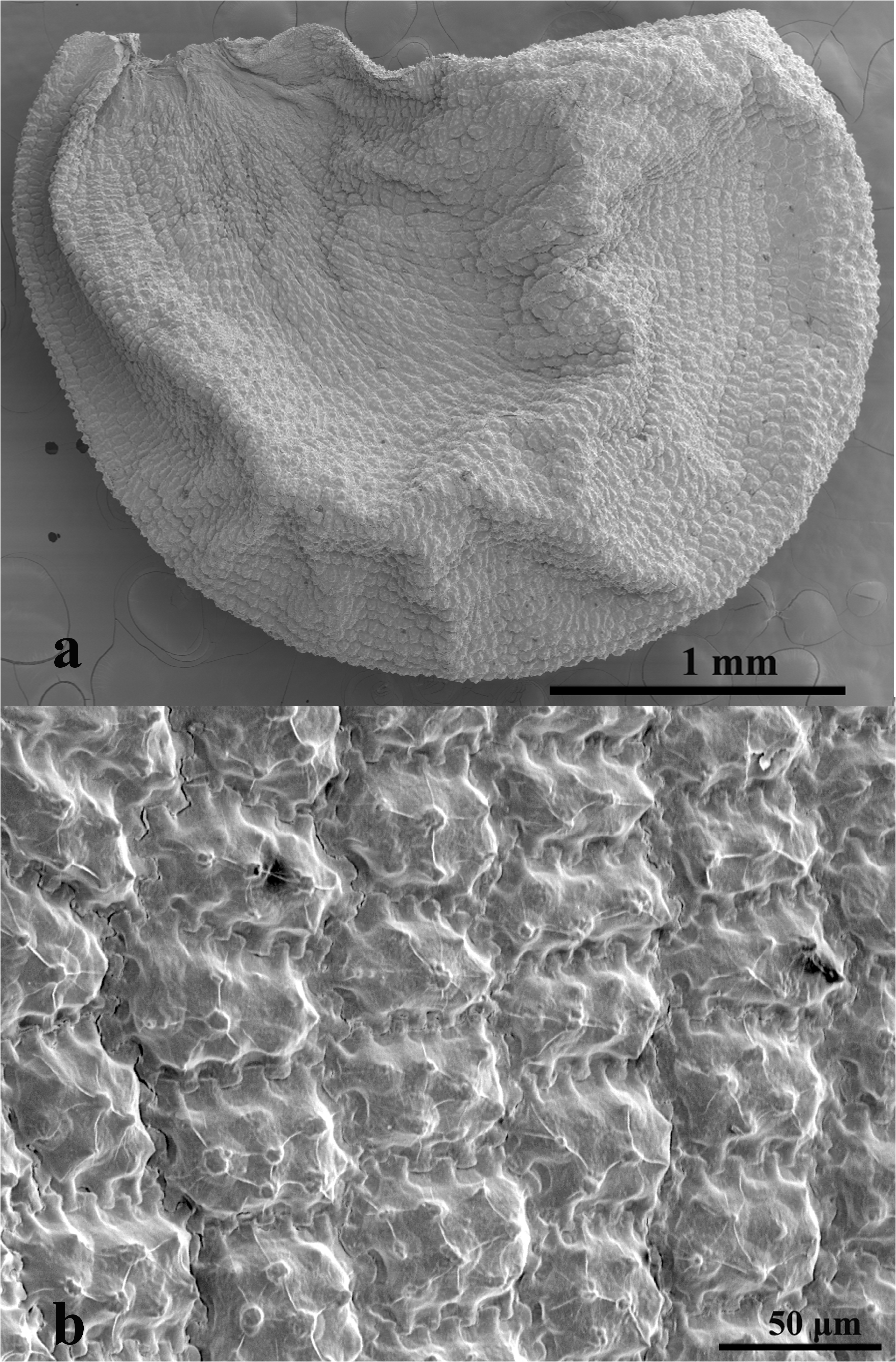 FIGURE 4. Scanning electron micrographs of a seed of Allium muratozelii. a) testa and b) details of testa cells.