is similar to the female in color, but has a conspicuous fringe of white setae directed ventromedially on the medial side of each paturon. This fringe is also found on adult male M. bivittatus , also found in Brazil ( Figure 22 View Figure 22 ). Unlike the male M. bivittatus , the male M. nigli does not have a more-or-less linear tract of scales on the midline of the opisthosoma, but like the female has a more variegated pattern of scales on the dorsal opisthosoma that usually includes chevons toward the rear. The white clypeal band of the male M. bivittatus is also much wider than that of M. nigli . The dorsal cymbium of the pedipalp of M. nigli is covered with long off-white setae. In M. bivittatus the dorsal cymbium is dark brown.

The pedipalp of the adult male Menemerus nigli has a relatively long cymbium and a large, curved embolus to the medial side of a prominent, sclerotized ventromedial lobe of the tegulum situated over the spermaphore loop ( Figure 9 View Figure 9 ). Unlike some Menemerus , the embolus has a single (not bifurcated) apex.

Many of the photographs of M. fulvus (L. Koch 1878) that have been posted on the internet (e.g., iNaturalist 2020), all from south and southeast Asia, may actually represent M. nigli . Unfortunately more recent drawings of the pedipalp of that species (e.g., Bohdanowitz & Prószyński 1987) bear little resemblance to the drawing presented with the original description (L. Koch 1878). As noted by Wesołowska in her revision of the African Menemerus (1999), "the majority of species (except few widely distributed) are very poorly known, the descriptions in older publications are inadequate and not supplemented with figures. Numerous specimens in museum collections are misidentified or unidentified." Presently a revision of Menemerus that includes the Asiatic species is needed.

Penultimate males ( Figure 10 View Figure 10 ) were similar to adult females but darker in appearance with fewer lightcolored setae, but identifiable as males by the presence of club-shaped cymbium at the end of each pedipalp. They lacked the white setae on the medial side of each paturon as found in the adult male.

The epigynum of M. nigli , with wide atria open toward the front and a pair of posterior spermathecae ( Figure 17 View Figure 17 ), was first described by Ali et al. (2018).

Our study sites (1.1 and 1.2, located 260 meters apart from each other) where Menemerus nigli was found in Rio de Janeiro are shown in Figures 19-20 View Figure 19 View Figure 20 . Another observer found Menemerus nigli at a third site (site 2), 2.4 km apart from our sites ( Figures 2 View Figure 2 , 21 View Figure 21 ). Previously, in Asia, this species was found either on or under stones, or on an indoor wall ( Wesołowska & Freudenschuss 2012; Chatterjee et al. 2017; Seyfulina et al. 2020). In Rio de Janeiro it was found only in a synanthropic context, living on the same kind of painted concrete or stucco exterior walls where the cosmopolitan M . bivittatus ( Figures 20 View Figure 20 , 22-23 View Figure 22 View Figure 23 ) is often found. Previously, we reported the occurrence of the African salticid Thyene coccineovittata in a synanthropic context, but living on garden plants in Rio de Janeiro and nearby areas ( Mariante & Hill 2019). These observations support the view that species that can adapt to anthropogenic habitats may be more successful in finding a niche when introduced to a remote place.

Intercontinental spider introductions are now taking place at high rate as a result of international trade ( Kobelt & Nentwig 2008). Introduced spiders are also known to displace native species ( Jakob et al. 2011; Houser et al. 2014). Each major biogeographical province has its own distinct fauna of salticid groups, and some of these may be the result of single-species introductions many millions of years ago. For example, the subtribe Freyina is an endemic Neotropical salticid clade ( Edwards 2015; Maddison 2015) that may have evolved from a single species of Afrotropical origin, just as the caviomorph rodents of South America represent a monophyletic group that evolved from a single introduction from Africa ( Lessa et al. 2014). A single introduction could greatly alter the neotropical fauna of the future.

Figure 2. Location of the two urban sites where Menemerus nigli has been found based on our study sites (1) and another site (2) where this species has been observed. Both sites are on the western side of Guanabara Bay in Rio de Janeiro, Brazil. Figure 6. Detailed views of an adult male (♂ 2) Menemerus nigli from Rio de Janeiro, Brazil. 1-2, Note the long, off-white setae situated on the dorsum of each cymbium, and the relatively narrow line of white setae across the clypeus. 4, Note the lack of a middorsal line and the presence of chevrons at the rear of the opisthosoma. 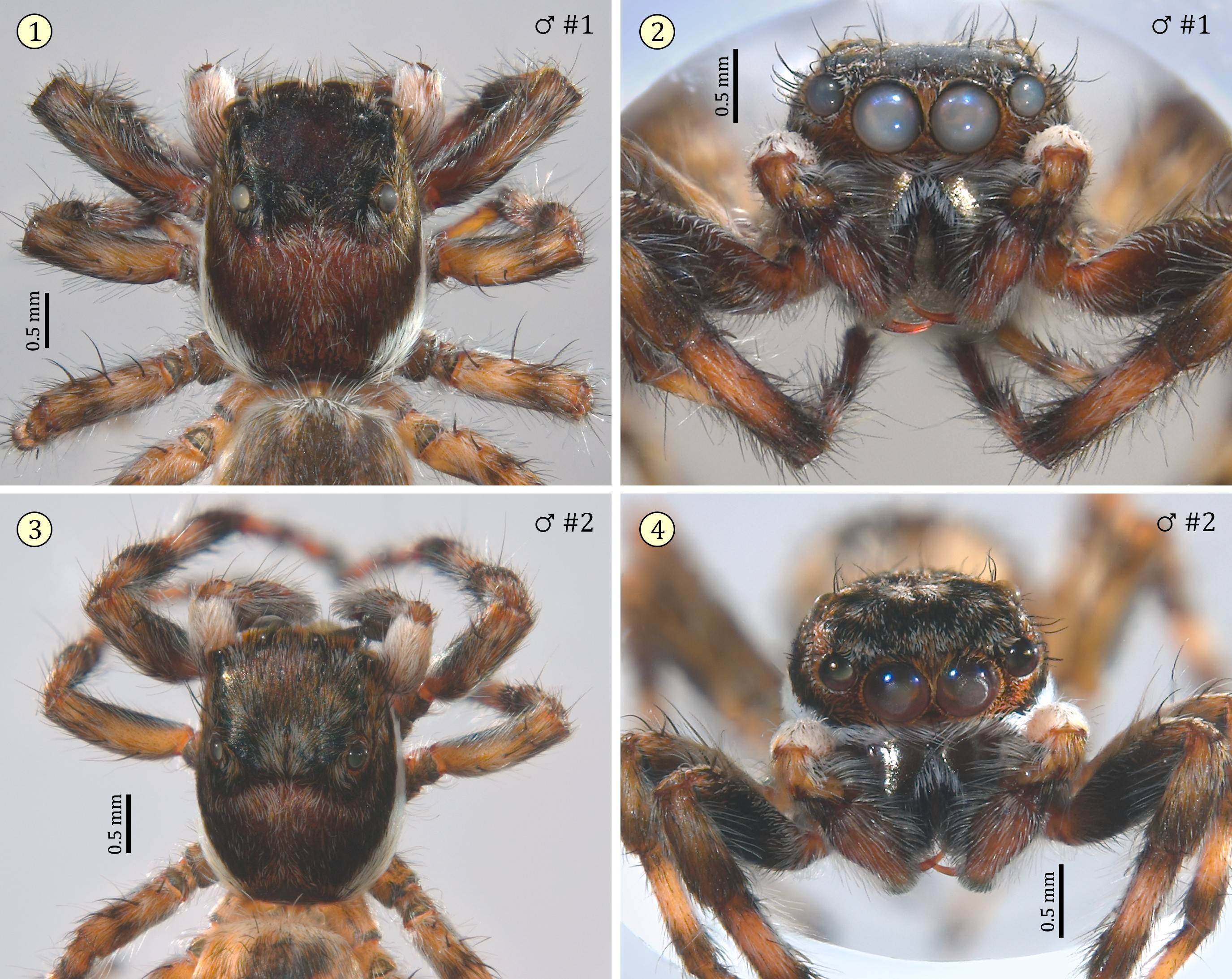 Figure 9. Left (♂ 1) or right (♂ 2) pedipalp of two adult male Menemerus nigli from Rio de Janeiro, Brazil. Images from the right pedipalp were flipped horizontally (mirrored) to facilitate direct comparison according to our left pedipalp convention. Thus they represent the appearance of the left pedipalp.

Figure 9. Left (♂ 1) or right (♂ 2) pedipalp of two adult male Menemerus nigli from Rio de Janeiro, Brazil. Images from the right pedipalp were flipped horizontally (mirrored) to facilitate direct comparison according to our left pedipalp convention. Thus they represent the appearance of the left pedipalp. 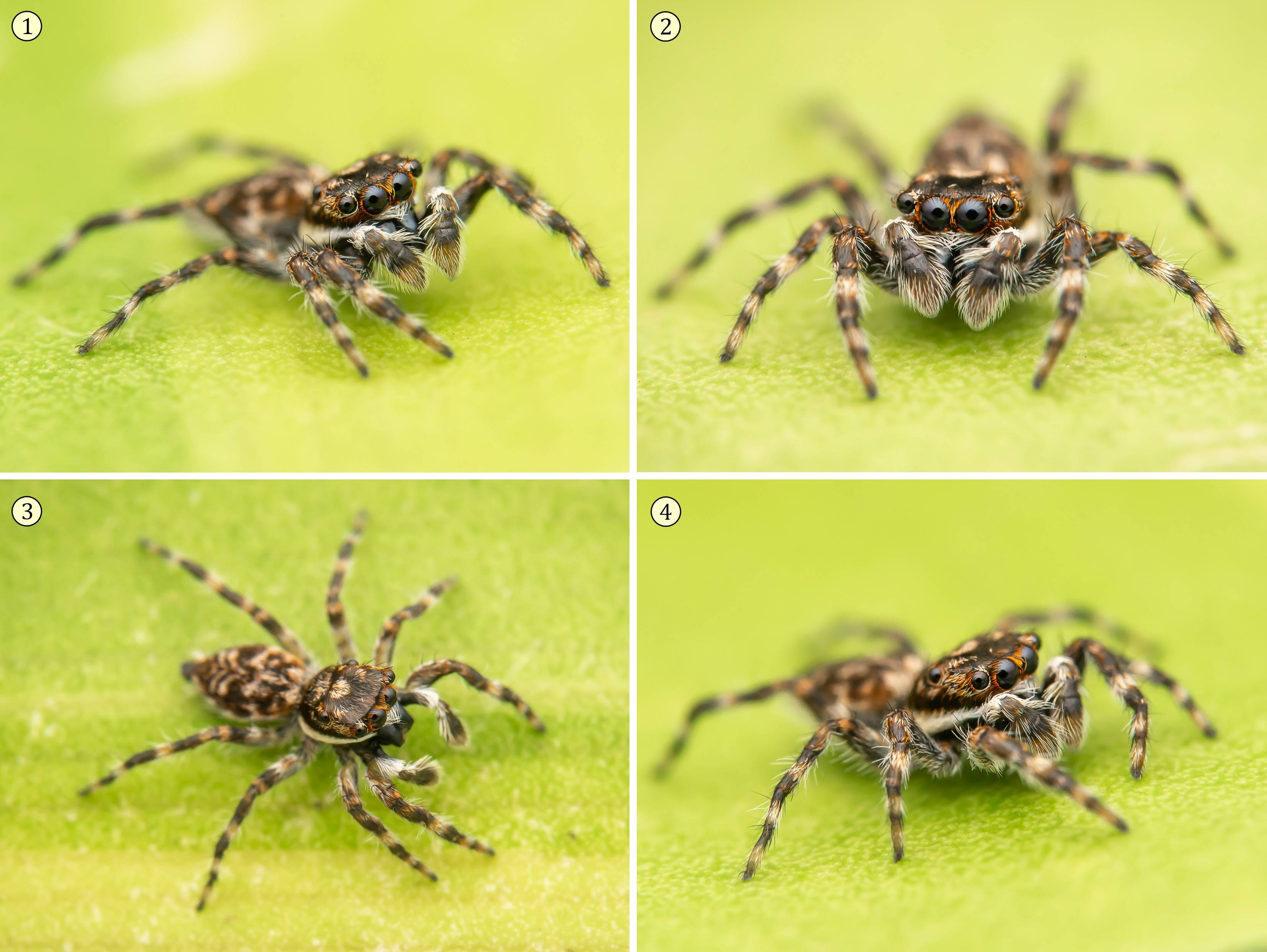 Figure 14. Detailed views of an adult female (♀ 1) Menemerus nigli from Rio de Janeiro, Brazil. 1-2, Note the dark brown color of the pedipalps, orange scales around the AME, and the relatively narrow line of white to off-white setae across the clypeus. 4, Note the lack of dark marginal bands and the presence of three chevrons at the rear of the opisthosoma. Figure 21. Additional record of Menemerus nigli in the state of Rio de Janeiro (OCT 2017). This immature or female spider was found at site 2, on a wall of a house. Photography by Fernando Vinícius Gomes de Moraes, used with permission.