The genus is named after the late Norman I. Platnick (1951-2020) who made unprecedented contributions to arachnology, including creating the World Spider Catalog. The gender is masculine.

The new genus is most similar to the Southeast Asian genera Oedignatha Thorell, 1881, Sesieutes Simon, 1897 and Sphingius Thorell, 1890. The male of the new genus differs from all other Oedignathinae by having a pair of longitudinal (longer than wide) ventral scuta (vs. absent). In addition, the male can be distinguished by having an antero-ventral femoral extension of the palp (vs. lacking) and a helical (screw threading) embolus embedded in a collar (Cl) (vs. filamentous embolus, lacking collar). Females of Platnick gen. n. differ from Oedignatha by lacking a dorsal scutum and having small (smaller than the epigyne) postgastral scuta (vs. scuta larger than the epigyne, transverse and almost touching each other).

Abdomen elongate and flat, 1.5-2 times longer than wide and >2 times longer than high, uniformly colored. Both sexes with epigastral scutum, in male encircling petiolus, in female scutum encircling ventral and lateral parts. Dorsum of male almost entirely covered with brown scutum; female abdomen pale, covered with small setae, with a pair of sigillae medially. Venter of abdomen in male with epigastric scutum rebordered posteriorly, postgaster with pair of longitudinal scuta tapering posteriorly, length/maximum width is about 2, connected to epigastral scutum near postero-lateral edge of book-lung opercula. Female with a pair of small transverse postgastral scuta attached to epigastral scutum near postero-lateral edge of book-lung opercula. In both sexes, epigastral scuta extend into petiolar tube. Spinnerets not darker than venter.

We were unable to match the species known only from the male with either morphospecies represented by females. All three specimens have different spination and were not collected from the same localities. Therefore, we describe the females as a different species than the male, understanding that in the future, one of the females may be synonymized with the generotype P. shablyai sp. n.

All three species were collected in the Khatlon Region of Tajikistan (Figs 33-34 View Figures 27–34 ). 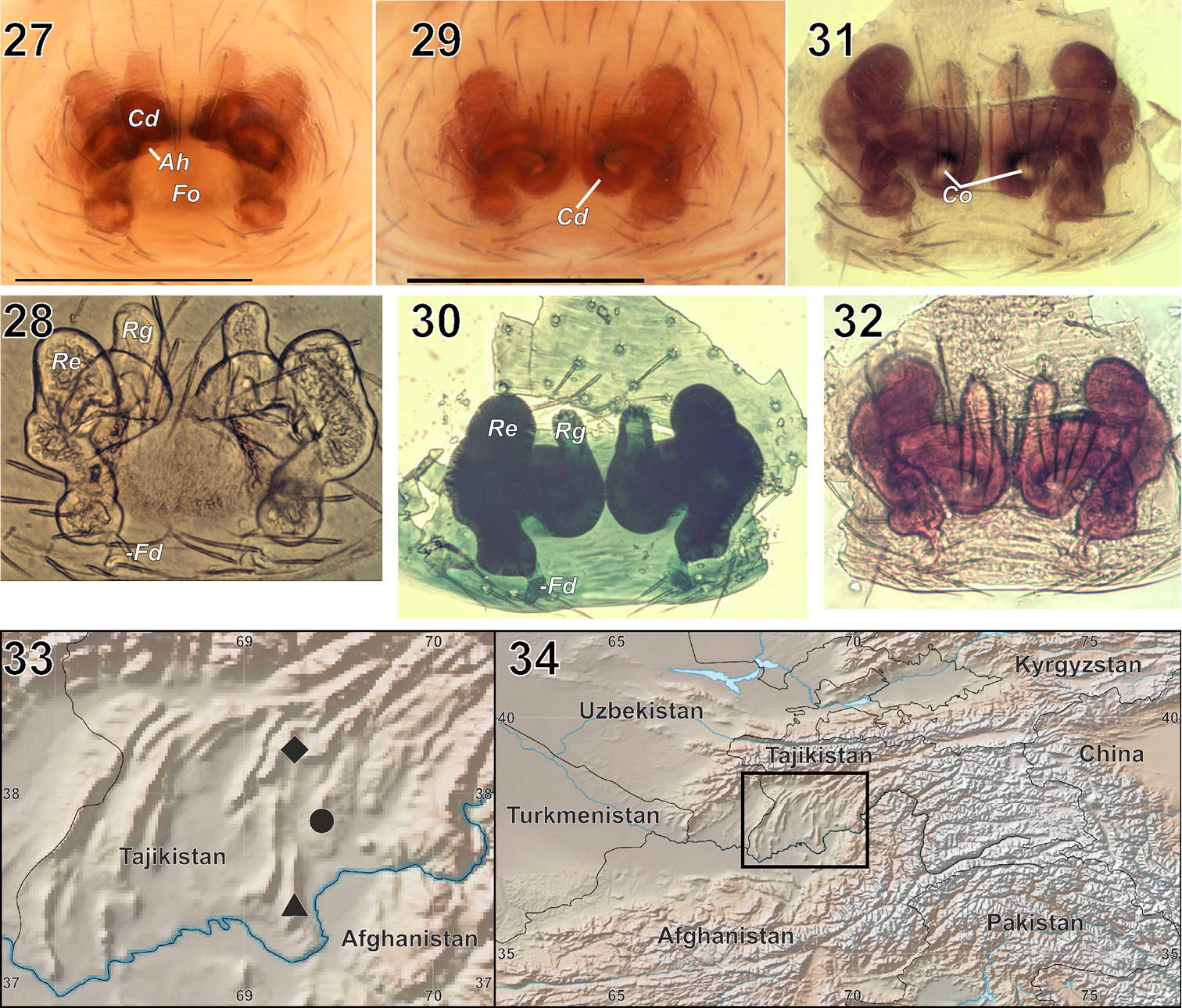