Description of type series. Data for size, shape and scalation is presented in Table 1. A relatively small (SVL 61.5–79.0 mm, mean 70.6 mm) and moderately robust (AG/SVL 0.43–0.49) Oedura . Body slightly depressed, covered in small granular scales; scales on ventral surface about the same size as those on dorsum; 1 spur positioned laterally on either side of the cloaca in both sexes, typically more well-defined in males; row of 8–18 (mean 14.0) pre-cloacal pores in mature males, divided medially by 2–6 granular scales without pores, line of pores extending to underside of each thigh; pre-cloacal pores not evident in females; neck broad and moderately long (NL/SVL = 0.21–0.27). Head distinct from neck; moderately long (HL/SVL = 0.21–0.24; S/HL = 0.43–0.47), relatively narrow (HW/SVL = 0.17–0.19) and moderately depressed (HD/SVL = 0.09–0.11); covered in small granular scales that are slightly larger on the dorsal and lateral surfaces of the snout; scales rounded to hexagonal; interorbital counts 21–23 (mean 22.1); rostral scale approximately twice as wide as deep, divided 40–60% (mean 50%) vertically by a medial groove; rostral contacting nostril, bordered by 2 (rarely, 3) scales along its dorsal edge, and bordered laterally on each side by the first supralabial scales; 6 scales contacting nostril; supralabials 11–13 (mean 12.0); first supralabial narrower than second supralabial; infralabials 10–12 (mean 10.9); enlarged scales extending back from mental scale, starting as relatively large and hexagonally-shaped and decreasing in size and becoming rounded on throat; ear opening small and rounded, occasionally diagonally elongate; eye relatively large (Eye/SVL = 0.045 –0.052). Limbs relatively short (FL/SVL = 0.10–0.12; HLL/SVL = 0.13–0.14); digits dorsoventrally compressed, with enlarged subdigital lamellae in a series that starts with relatively small and undivided scales and increases in size and width to become paired, obviously expanded scales; the penultimate pair is slightly narrower; the apical pair is obviously enlarged and separated from the series; 3 rd toe subdigital lamellae counts 8–9 (mean 8.1) (including apical pair); 3 rd finger subdigital lamellae counts 7–8 (mean 7.4) (including apical pair). Original tail moderately long (TL/SVL = 0.70–0.79) and narrow (TW/TL = 0.16–0.17); tapered; only slightly depressed (TD/TW = 0.79–0.81); scales arranged in concentric rings, about the same size on the dorsal and on ventral surfaces. Regrown tail moderately long (TL/SVL = 0.53–0.69) and narrow (original TW/TL = 0.20–0.23); tapered; only slightly depressed (TD/TW = 0.75–0.83); scales arranged in concentric rings, about the same size on the dorsal and ventral surfaces. Colouration in spirit. Dorsal pattern broadly consists of a series of pale streak or spots on either side of the dorsal midline, a series of small, irregular spots along the mid-lateral line, and a background pattern heavily marked with black mottling and smudging. The nape marking is a prominent V- or Y-shaped marking that is broken in the middle. The V-shaped marking consists of two bars angled from the back of each temporal region to the midline on the nape. The Y-shaped nape marking is similar but each bar then extends as a streak down the back of the neck, with each pale streak separated on either side of the midline. Following the nape bar is a dorsal series of pale streaks or spots that run along either side of the midline. These pale markings may be paired or off-set but, even when paired, they are rarely merged. There is typically a thin pale line along the midline that may be unbroken or broken by the black edging around markings. On most specimens there is a series of obscure or obvious small pale spots along the midlateral line. The pale nape marking, dorsal markings and lateral spots are all edged with black and this merges with the extensive dark markings on the dorsal and lateral surfaces, such that the markings all appear heavily connected rather than discrete. A dark band extends from the naris to the eye, and then extends as the same thickness from the back of the eye to the nape marking and onwards down the dorsolateral zone. This dark band is bordered below by a thin white line along the labial scales that continues through the ear opening and along the neck to the insertion of the forelimb. The top of the head is heavily mottled with dark markings, but with pale areas in the upper temporal regions posterior to the eye, and a grey tinge on top of the eyes. There are sometimes white spots on the posterior temporal region or the back of the head. The top of the snout is dark, medially, and each canthus rostralis is pale. Iris dark with a milky, opaque surface. The limbs are dark with pale flecking. There is some indication of pale spots on the base of the hindlimbs on some individuals. The original tail is heavily marked with dark markings, with irregular, paired, pale markings along the dorsal midline. The regrown tail is dark with white flecking. All ventral surfaces are even, yellowish cream, except the underside of the tail which is yellowish cream but with faint indication of the dorsal and lateral tail pattern. Cloacal spur white.

Colouration in life ( Figs. 5D View FIGURE 5 , 15 View FIGURE 15 , 16 View FIGURE 16 ). As described above but all pale markings are whiter, dark markings are darker (dark grey or black), and the background colour is yellow rather than beige, with the yellow particularly bright on the tail. White spots on the base of the hindlimb are more pronounced in life, and present on most individuals. Iris appears black but there can be some indication of dark copper or brown under close inspection. The labial scales are bright white in life. Juveniles have creamy yellow markings, each edged with black, on a pinkish grey background ( Fig. 15F View FIGURE 15 ).

Within the tryoni group, O. lineata sp. nov. is readily distinguished from O. castelnaui and O. argentea by having a V- or Y-shaped white nape marking enclosed in black (versus full nuchal band in those species) and dorsal pattern of linearly-arranged white streaks and/or spots (versus full transverse body bands in those species) ( Fig. 2 View FIGURE 2 ). Distinguished from O. coggeri by lack of white spots on forelimbs (versus obvious white spots), original tail pattern of paired blotches on dorsal midline (versus blotches arranged as irregular bands), narrower head (HW/SVL 0.17– 0.19 versus 0.19–0.22), regrown tail longer (TL/SVL 0.53–0.69 versus 0.47–0.59) and rounder (TW/TL 0.75–0.83 versus 0.64–0.76), and higher interorbital count (21–23 versus 15–18). Distinguished from O. tryoni by V- or Yshaped white nape marking (versus many spots or few blotches), dorsal pattern of linearly-arranged streaks and/or spots on either side of a thin yellowish midline (versus evenly spotted or blotched), smaller size (SVL max 79.0 mm versus max 103.1 mm), typically, lower number of pre-cloacal pores in males (18 or less versus mean 19), and series of pre-cloacal pores in males generally separated by more scales medially (2–6 versus 0–3) ( Tables 1, 2).

Differs from O. monilis in typically having a V- or Y-shaped broken nape bar (versus, typically, unbroken nape bar), dorsal pattern of linearly-arranged streaks, spots and black markings on either side of thin, pale midline (versus transverse bars or connected large blotches on the dorsal midline), original tail pattern of paired blotches on dorsal midline (versus irregular bands), usually small white spots on base of hindlimbs (versus no spots on hindlimbs), smaller size (max 79.0 mm versus max 96.6 mm), higher interorbital count (21–23 versus 16–20), generally lower number of supralabials (11–13 versus 9–12), and series of pre-cloacal pores in males generally separated by more scales medially (2–6 versus 0–3) ( Tables 1, 2).

Differs from O. elegans sp. nov. in having a V- or Y-shaped broken nape bar (versus unbroken bar), dorsal pattern of linearly-arranged series of streaks, spots and black markings on either side of thin, pale midline (versus paired dumbbells along midline), lateral surfaces heavily marked with white spots and black markings (versus finely flecked), a dark band running from the back of the eye and usually to the nape marking (versus a thin black line running from below the back of the eye to below the nape marking), usually small white spots on base of hindlimbs (versus no spots on hindlimbs), smaller size (max 79.0 mm versus max 89.4 mm), relatively more rounded original tail (TD/TW 0.79–0.81 versus 0.63–0.74), higher interorbital count (21–23 versus 17–21), higher number of supralabials (11–13 versus 9–11), and series of pre-cloacal pores in males generally separated by more scales medially (2–6 versus 1–3) ( Tables 1, 2).

Differs from O. picta sp. nov. in having a V- or Y-shaped broken bar (versus, typically, unbroken bar), dorsal pattern of linearly-arranged series of lines, spots and black markings on either side of thin, pale midline (versus irregularly dispersed large blotches), a dark band running from the back of the eye and usually to the nape marking (versus an obscure, thin black line running from below the back of the eye to usually below the nape marking), usually small white spots on base of hindlimbs (versus, typically, no spots on hindlimbs), original tail pattern of paired blotches on dorsal midline (versus irregular bands), iris dark (versus gold), shorter head (HL/SVL 0.21–0.24 versus 0.23–0.26), more rounded original tail (TD/TW 0.79–0.81 versus 0.66–0.74), higher interorbital count (21–23 versus 16–20), higher number of supralabials (11–13 versus 9–11), and series of pre-cloacal pores in males generally separated by more scales medially (2–6 versus 1–2) ( Tables 1, 2).

Etymology. The species name lineata is derived from Latin and refers to the linearly-arranged white lines, spots and dark markings that characterise this species.

Distribution. Only known from two remnant patches of brigalow ( Acacia harpophylla ) in the Arcadia Valley. The two populations are protected in Expedition National Park (Lonesome section) and Nuga Nuga National Park. Brigalow forest had an extensive distribution in inland eastern Australia but has been heavily cleared and fragment- ed. Many of these fragments have been surveyed ( Covacevich et al. 1998) and yet specimens of this species have never been collected outside of the Arcadia Valley, suggesting the species is endemic to this area.

Ecology. Oedura lineata sp. nov. appears to be restricted to thick brigalow ( Acacia harpophylla ) forest ( Figs. 16 View FIGURE 16 , 17 View FIGURE 17 ). Surveys in mixed woodland and rock outcrops surrounding brigalow habitat in Expedition National Park failed to find the species. Individuals are found at night foraging on brigalow stems and branches, and fallen timber. The typical foraging position is head-down on a brigalow trunk within 1.5 m of the ground (e.g., Fig. 16 View FIGURE 16 ). When disturbed, the geckos retreat into holes or cracks in the wood or behind bark. Other gecko species found in the brigalow habitat with O. lineata sp. nov. were Strophurus taenicauda (De Vis) , Gehyra catenata Low , Gehyra dubia , Heteronotia binoei , and Diplodactylus vittatus . Oedura lineata sp. nov. is not known to co-occur with congeners. Oedura elegans sp. nov. has been found in woodland in the region (but not in the same brigalow habitat) and O. tryoni occurs in nearby rock outcrops.

Conservation. Oedura lineata sp. nov. is common within the two known habitat patches but both of these patches are small, isolated fragments. One patch is about 7 km 2 and the other patch is about 2 km 2, and the two patches are about 50 km from each other. Brigalow was once the dominant vegetation in the Arcadia Valley but was heavily cleared to graze cattle on the high fertility soils it grows on. Most of the Arcadia Valley is now completely devoid of native vegetation and the brigalow habitat for O. lineata sp. nov. has been reduced to <1% of its former extent in this area. Oedura lineata sp. nov. has clearly suffered a massive reduction in range and population size over the last century and the remaining areas of habitat are potentially threatened by wildfire. High intensity fires burning in from adjacent woodlands could reduce or completely remove (at least temporarily) habitat at both sites. The species should therefore be assessed as a threatened species. All remaining remnants of brigalow habitat in the Arcadia Valley, which are few and very small in size, should be surveyed for this species. The primary conservation action is to increase the area and connectivity of brigalow habitat in the Arcadia Valley, either through replanting or allowing natural regeneration. Off-set schemes associated with mining and other clearing activities in the region could play an important role in this. 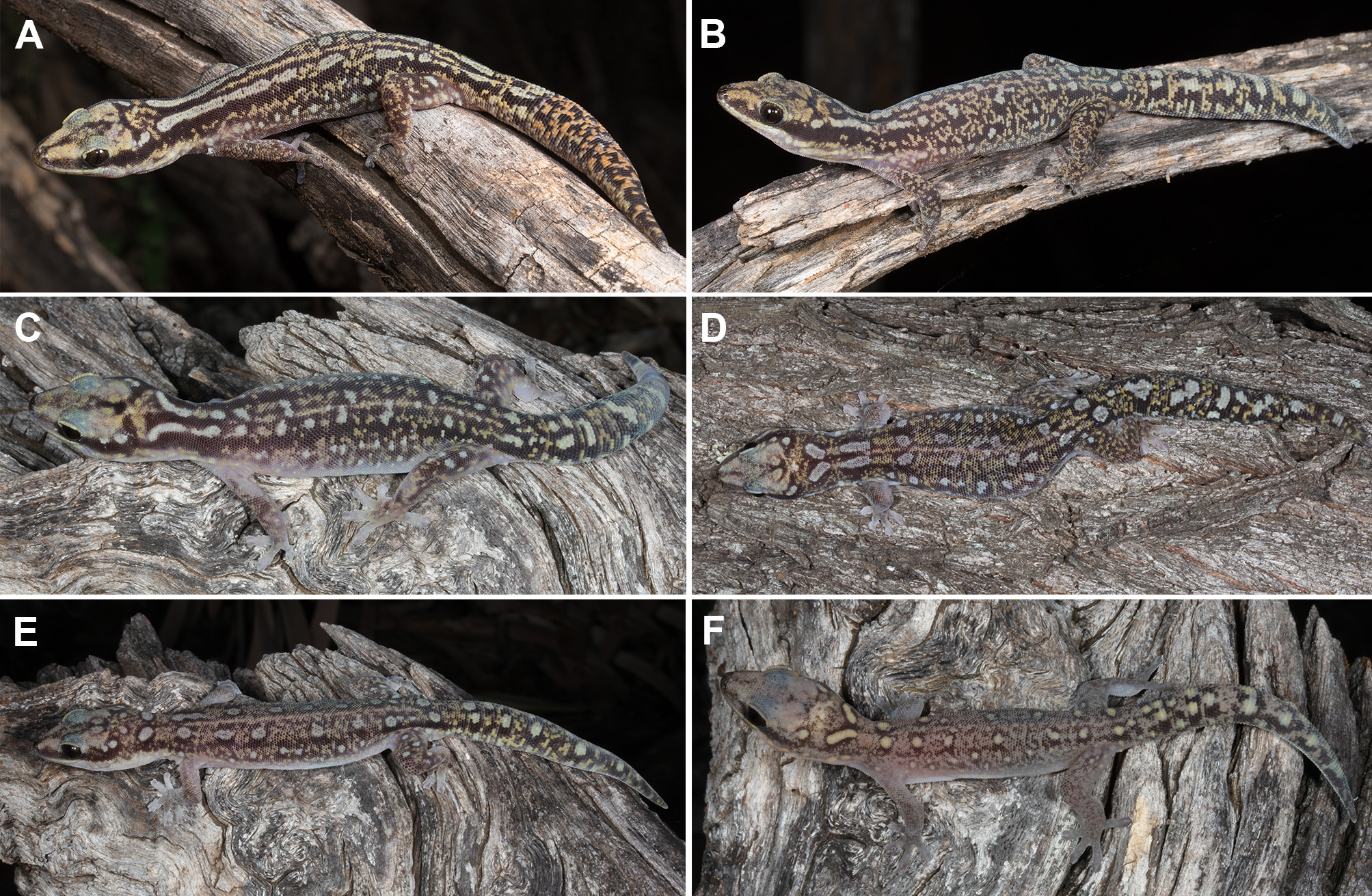 FIGURE 16. Oedura lineata sp. nov. foraging at night in a typical position on the lower trunk of a brigalow tree. Photo: Conrad Hoskin.