Left cheliped ( Fig. 13F, G View Fig ) usually weakly calcified on nearly entire dorsolateral face of carpus. Fingers each terminating in small corneous claw; dorsal and ventral surfaces unarmed except for scattered tufts of setae; cutting edge of dactyl with row of minute, fused corneous teeth; cutting edge of fixed finger with row of well-spaced small calcareous teeth. Dactyl about as long as length of mesial margin of palm, with scattered tufts of setae; with 1 or 2 small proximal spines or tubercles on dorsal face. Fixed finger with scattered tufts of setae. Palm with dorsomesial row of small spines or tubercles, and scattered setae; ventral face smooth except for scattered setae. Carpus with dorsal irregular row of small spines in addition to dorsodistal and dorsolateral spine on distal margin; dorsal surface with long setae; ventral face smooth except for scattered setae. Merus with long setae on dorsal margin; with ventrolateral row of small spines; ventral face smooth. Ischium and coxa unarmed, but with ventromesial row of setae.

Distribution. So far known only from the eastern Pacific, in the Juan Fernández Islands, Chile. Depth: 130– 160 m.

Remarks. Oncopagurus crusoei   , new species, is only the second species of Oncopagurus   documented from the entire eastern Pacific, the other being O. haigae   . This new species distinctly differs from O. haigae   in various characters. In this new species, the ocular peduncles are stouter than in O. haigae   ; the antennal acicles reach to about the proximal margin of the corneas, whereas in O. haigae   the acicles exceed the cornea by 0.3–0.5 the length of the acicle. In this new species, the armature of the dorsal and ventral surfaces of the carpus and chela of the right cheliped is generally stronger and with more numerous spines or tubercles, whereas in O. haigae   the dorsal surface armature is mostly of scattered small spines (sometimes arranged medially in irregular rows), and the ventral surfaces are unarmed or at most with occasional small tubercles. In this new species, the dorsal margin of the carpus of the left cheliped is armed with an irregular row of mostly sharp spines, whereas in O. haigae   the carpus is unarmed dorsally except for a dorsodistal spine. The telson ( Fig. 11E View Fig ) in this new species is moderately asymmetrical in both sexes, and at least based on the available material, there is no strong dimorphism in telson shape and armature. In contrast, the telson in females of O. haigae   have strongly asymmetrical terminal lobes armed with more spines and rows than in males ( Fig. 25R View Fig ). Males of O. crusoei   , new species, have paired first and second gonopods ( Fig. 11F, G View Fig ), whereas males of O. haigae   lack first gonopods and the second gonopods are asymmetrical.

Etymology. The species is named in honor of Robinson Crusoe, the fictional castaway character in the famous novel by Daniel Defoe. The novelist was most likely inspired by the experience of Alexander Selkirk, a Scottish sailor who was marooned in the early 18 th century in the island of Más a Tierra, one of the Juan Fernández Islands later renamed Robinson Crusoe Island. 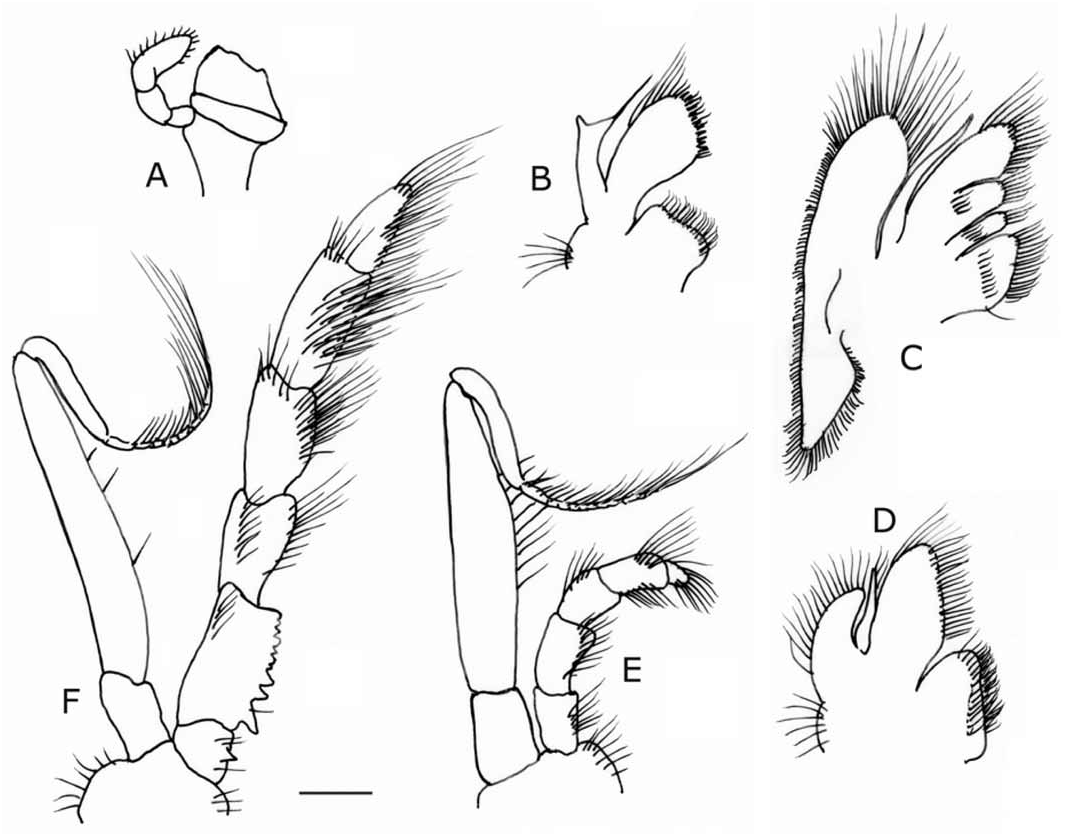 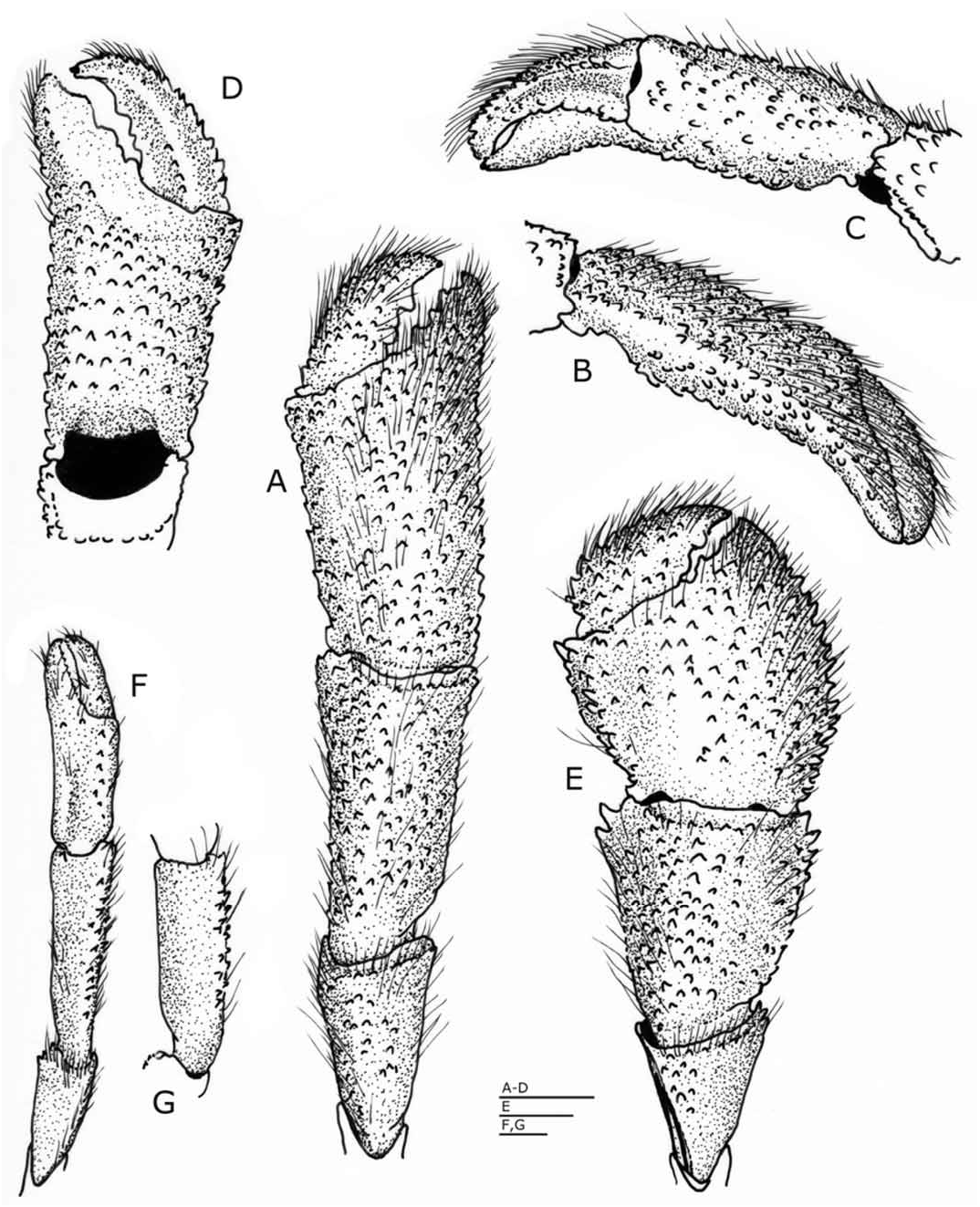 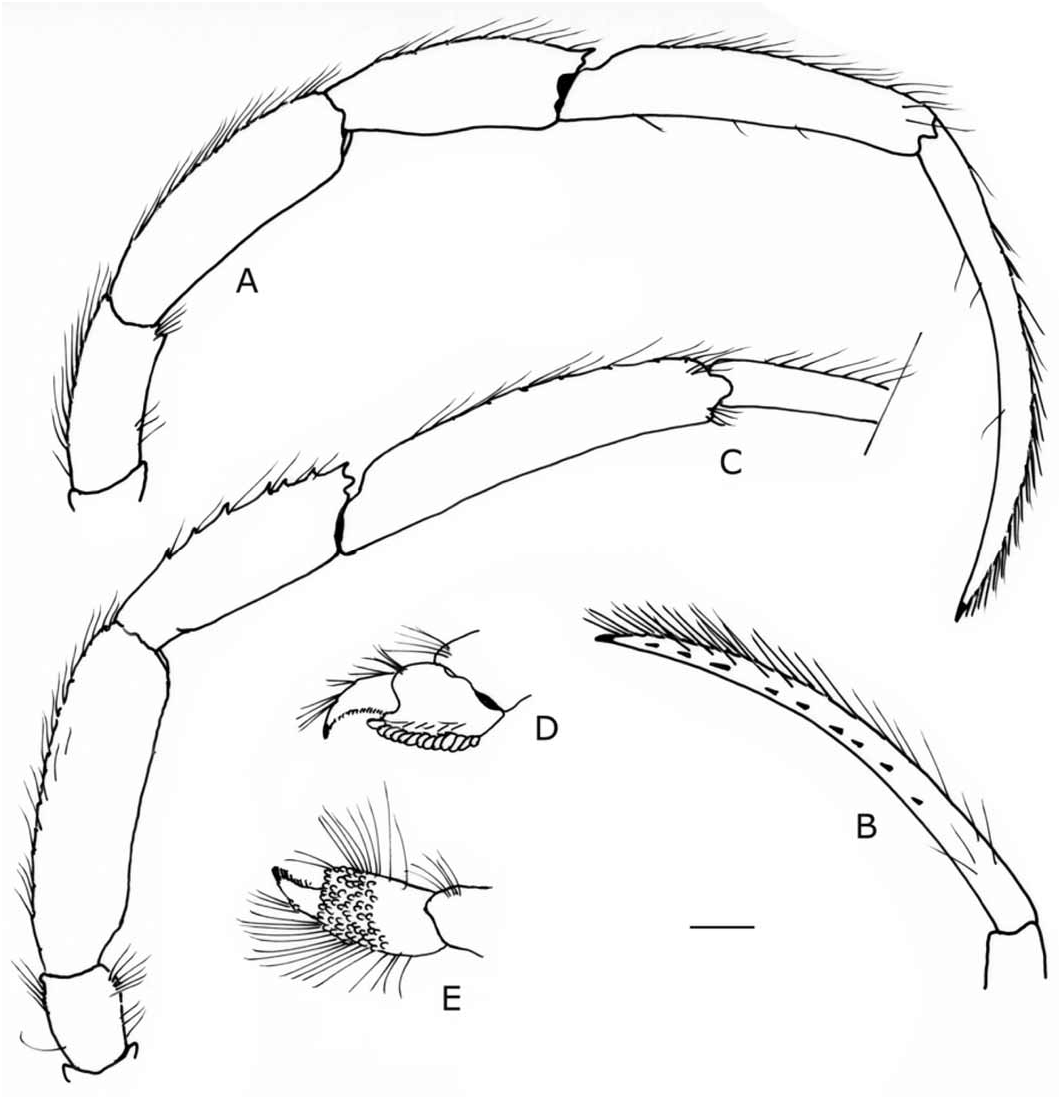 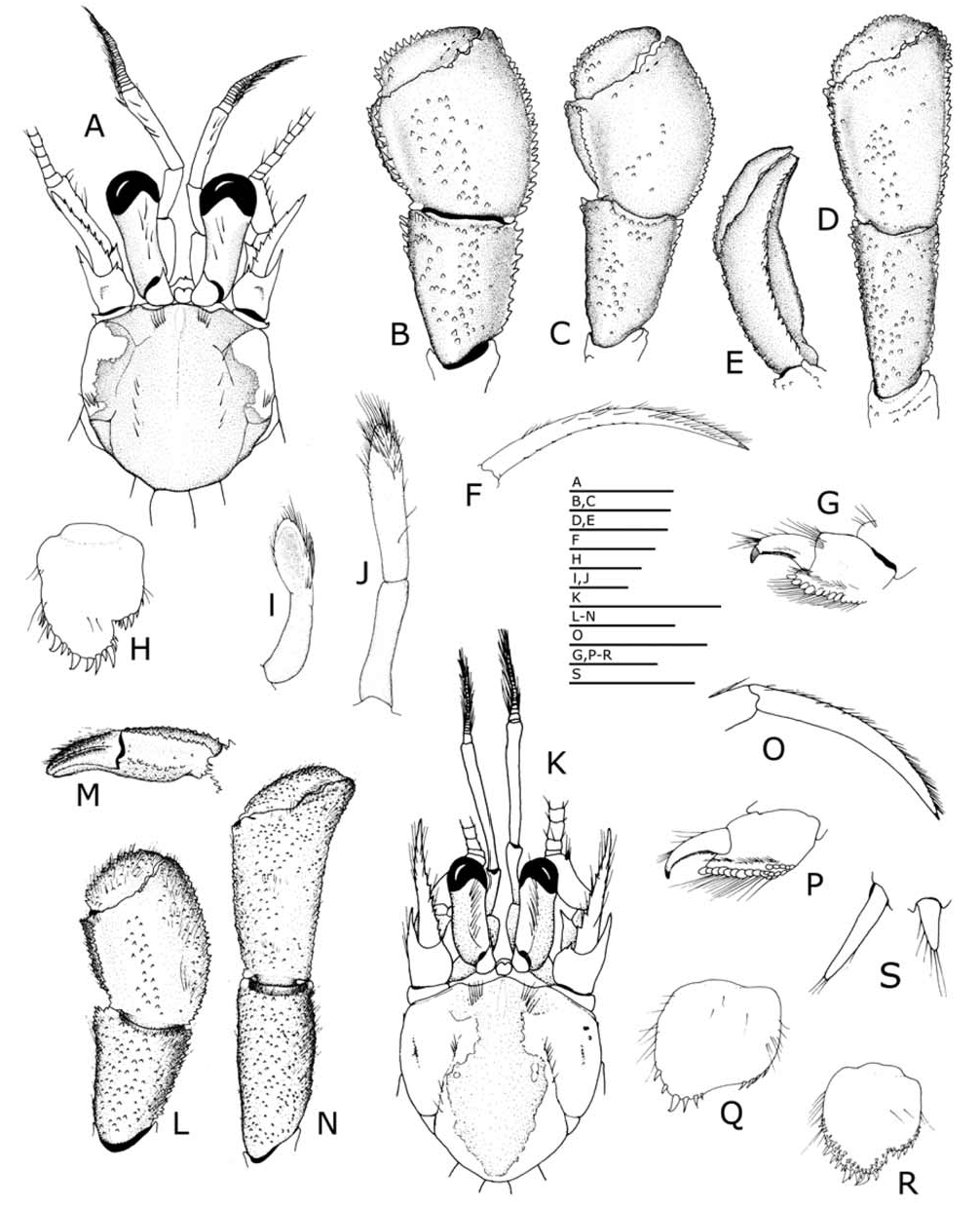