ETYMOLOGY: The new genus-group name is a combination of syn - (Greek, meaning ‘‘together’’; a reference to the fused metasomal terga relative to other Cretaceous eucoilines) and Eucoila   , type genus of the subfamily. The name is feminine.

ETYMOLOGY: The specific epithet is taken from the Latin word magnificus (meaning ‘‘splendid’’) and is a reference to the esthetic beauty of the holotype.

COMMENTS: Although the family Cynipidae   is universally accepted as monophyletic, satisfactory character evidence readily defining the family is lacking except for its phytophagous habit. Numerous characters have been put forward as putative synapomorphies for the family, including the lack of the lateral pronotal carina and an open marginal cell in forewing ( Liljeblad and Ronquist, 1998), as well as a medially narrowed dorsellum (Ronquist, 1999). However, all of these putative synapomorphies have exceptions both within Cynipidae   (as rever- sals) and in Figitidae   (as parallelisms) (e.g., Ronquist, 1999). Nonetheless, the family can still be reasonably defined based on a combination of morphological attributes. In addition to the aforementioned characters, the following traits can be useful in the diagnosis of cynipids: (1) dorsal pronotal area absent; (2) metasoma of female strongly compressed; (3) Rs+M arising from middle of the first free abscissa of M (5 basal vein); (4) 2r-rs about 0.5–0.65 times as long as Sc+R 1; (5) R 1 lateral of 2r-rs directed distinctly obliquely laterally rather than more or less perpendicular to anterior wing margin; and (6) R+Rs and Sc+R 1 smoothly continuous, not forming a distinct angle (see Liljeblad and Ronquist, 1998). 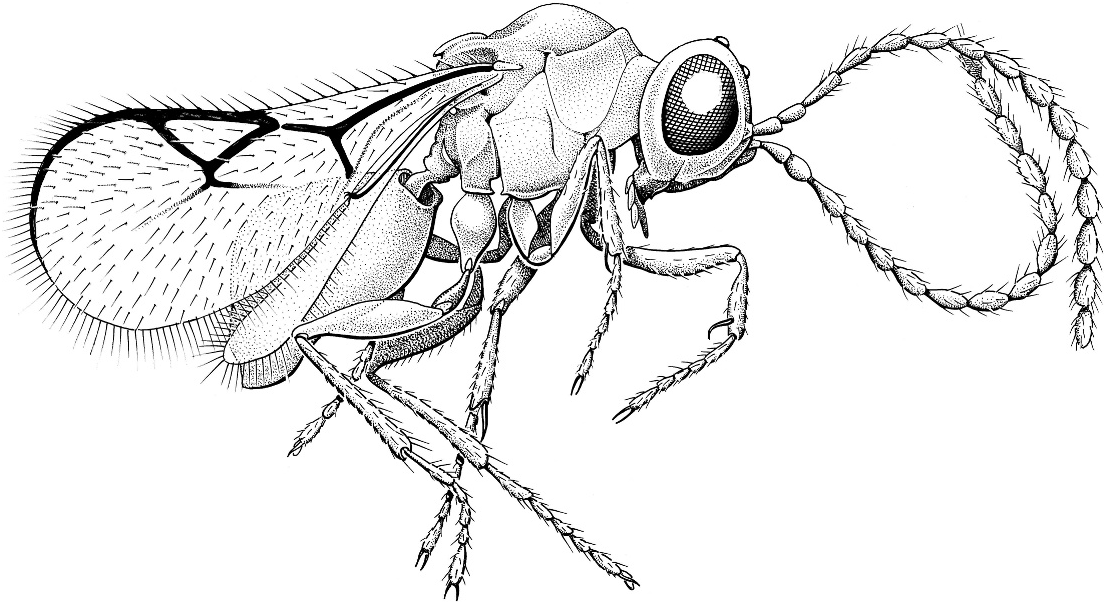