Morphologically, S. combai is similar to members of the S. miniatus Hagens, 1882 species group, i.e. S. creticus Warncke, 1992, S. haladai Warncke, 1992, S. larochei Warncke, 1992, S. marginatus Hagens, 1882, S. miniatus Hagens, 1882, S. nomioidis Pesenko, 1979, S. schwarzi Astafurova & Proshchalykin, 2014, and S. sandykachis Astafurova & Proshchalykin, 2018 (see Astafurova et al. 2018). However, this species clearly differs from other species of this group by F2 with tyloids covering the entire ventral flagellar surface (versus glabrous F2 or F2 with tyloids covering only the basal part of F2, Fig. 7B, C View Figure 7 ). This character was also pointed out by Nobile and Turrisi (2013) as a clearly distinguishing one from S. marginatus . Another important feature mentioned by these Italian researchers is the gonostylar shape. Although being very similar in these two species, in S. marginatus it is relatively smaller and close to the triangular membranous portion of the gonostylus (Fig. 7D View Figure 7 ), distinguishes, S. combai from its trapezoidal membranous portion is larger (Fig. 1E View Figure 1 ). Thus, its shape is most similar to that in S. nomioidis (Fig. 7E View Figure 7 ), although the position of the gonostylus or deformation of the genitalia in some specimens can significantly complicate proper usage of this feature. In fact, we could not clearly differentiate between S. combai and S. nomioidis , except by F2 tyloids (F2 is entirely glabrous in S. nomioidis ).

Based on antennal morphology, Nobile and Turrisi (2004, 2012) referred S. combai (and the other six species described in 2004) to the S. pinguiculus Pérez, 1903 species group (i.e., to the same group with S. pinguiculus and S. intermedius Blüthgen, 1923). Although S. pinguiculus and S. intermedius also have a similar T2 with tyloids usually covering the entire ventral flagellar surface (sometimes T2 is entirely or partially glabrous in S. intermedius ), S. combai differs from these species by a shorter antenna with flagellomeres being 1.1-1.2 times as long as wide (versus 1.4-1.7, Fig. 7A View Figure 7 ), a shorter vertex (the distance from top of the head to the upper margin of the lateral ocellus, being about two lateral ocellar diameters as seen in dorsal view, versus 2.5-3), the face above the antennal sockets with sparser and shorter pubescence partially obscuring the integument (versus dense long pubescence entirely obscuring the integument, Fig. 7A View Figure 7 ), and a more sparsely and finely punctate T1 with punctures separated by 2-5 puncture diameters (versus at most 2). So, possible placement of S. combai to the S. pinguiculus species group is doubtful and would be premature without taking into account the female morphological features. Besides, morphologically it is more similar to S. marginatus and S. nomioidis , so most likely S. combai belongs to the same group with the latter two species.

Female. The female of S. combai has not been described, but we examined two from Italy (1 ♀, Emilia Romanga, Comacchio, VII.2001, M. Richa, and 1 ♀, Sicily, Naxos Strand, 17.V.1961, J. Gusenleitner), both in the personal collection of M. Schwarz, Ansfelden, Austria) determined by J. Straka (in 2012) as S. combai. These specimens are very similar to S. marginatus , but with a relatively denser punctate ocello-ocular area. It is likely that these two female specimens belong to S. combai , thus providing an additional indication that this species is likely to belong to the informal S. miniatus species group. However, we refrain from describing the female sex of this species based on specimens not in the same series with conspecific males. In addition, if the assumption that S. combai belongs to the S. miniatus species group is correct, then the female of S. combai may have very weak morphological differences from the other members of this group. Therefore, description of the other sex of S. combai may also require additional genetic evidence, which is now unfortunately lacking for both sexes.

Most species of Sphecodes exhibit a considerable intraspecific variation. While studying numerous specimens from various parts of the Old World we have observed variation in the body size, sculpture, coloration, and sometimes degree of development of the tyloids and relative length of the flagellomeres. Intraspecific versus interspecific variation in body size Sphecodes is an interesting topic that warrants a further, thorough investigation, including using molecular methods.

Indicated differences between the seven nominal species described by Nobile and Turrisi (2004) were based on sculpture (of the vertex, frons, T1), coloration (of the mandibles, antennae, metasoma and legs) and the gonostylar shape. We have reexamined the holotypes of S. banaszaki , S. tomarchioi , S. iosephi , S. walteri , S. marcellinoi , S. combai and concluded that the minor morphological differences between them can be considered as intraspecific variation, as also pointed out by Schwarz and Gusenleitner (2012).

The main differences between the primary type specimens examined are outlined in Table 1 View Table 1 . The holotype of S. marcellinoi has a sparser punctation on the upper half of the frons; tergal coloration of the holotype of S. combai is lighter and reddish; the holotype of S. banaszaki is larger (6 mm versus 4-5 mm) and with coarser and denser T1 punctation; the holotype of S. iosephi has a denser punctate ocello-ocular area and mandibles medially dark yellow (not entirely black as incorrectly indicated in the original description). The slight differences in the gonostylar shape, as illustrated by Nobile and Turrisi (2004), are the result of a deformation and different position of the gonostylus relative to the axis of genitalia, see also Schwarz and Gusenleitner (2012).

On the other hand, such a rare feature as F2 with tyloids covering the entire ventral flagellar surface not only distinguishes the six nominal species of Sphecodes described by Nobile and Turrisi (2004) from Italy from the other Palaearctic species quite well, but also more likely (also based on their morphological similarity) indicates their conspecificity within S. combai . 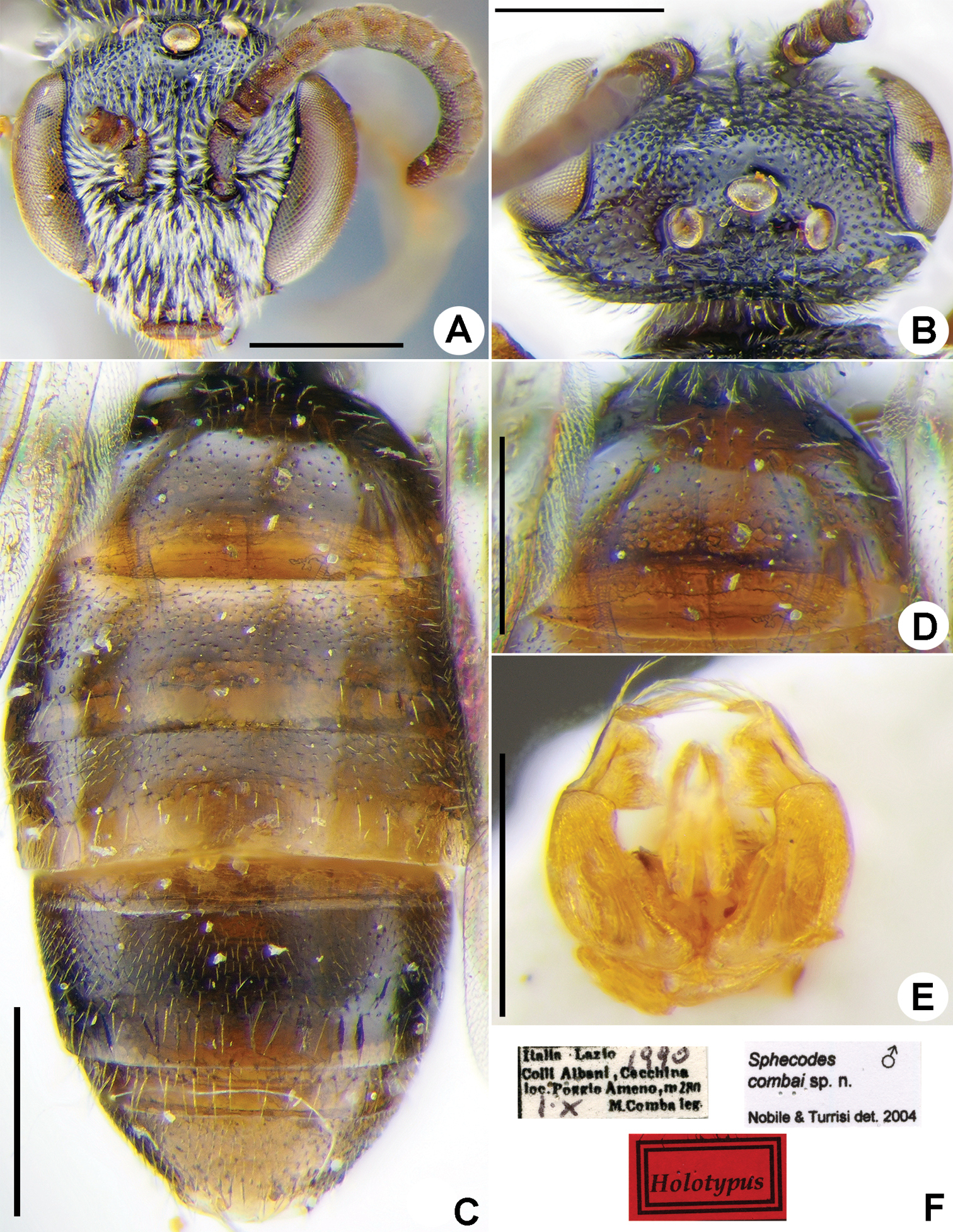 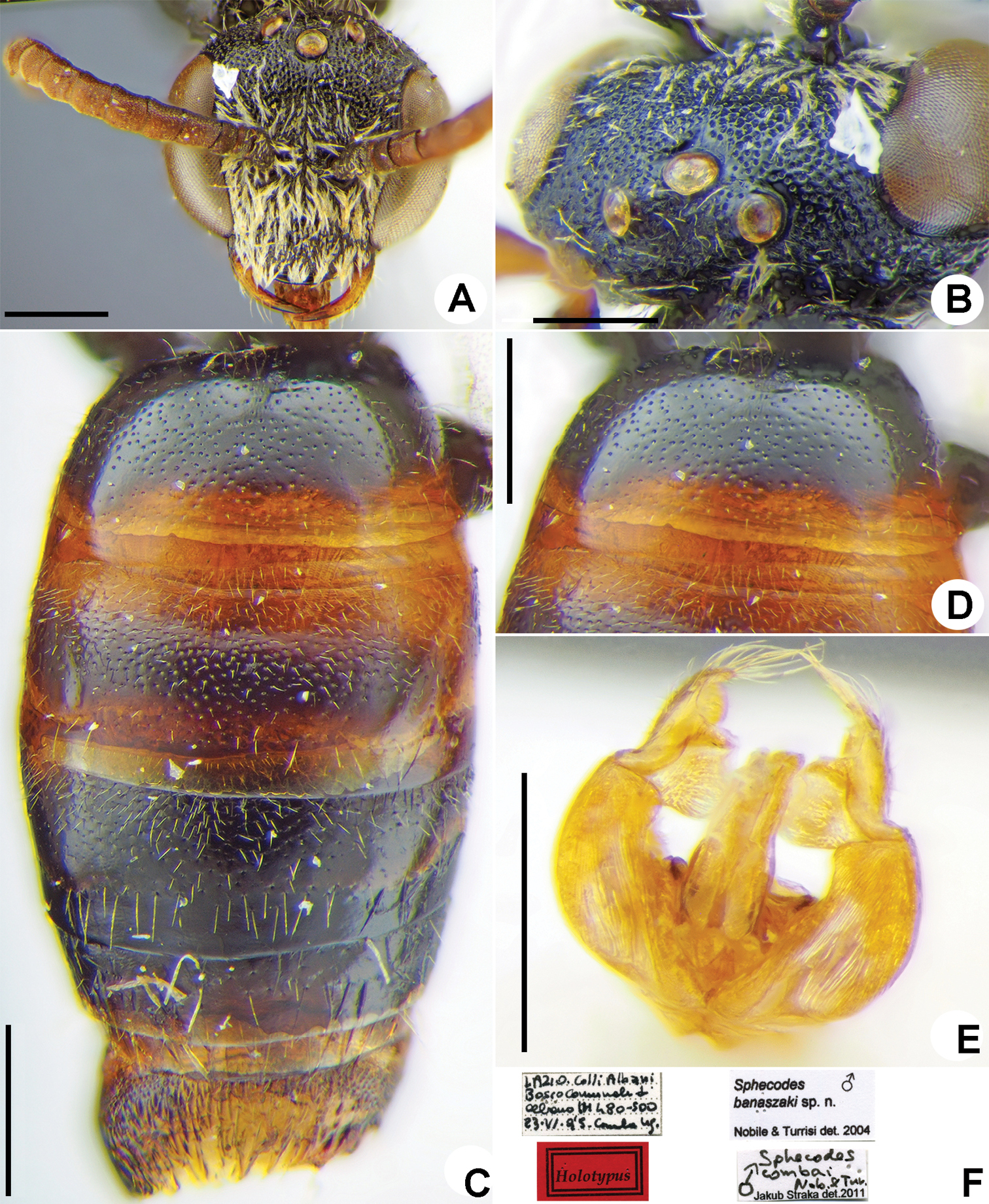 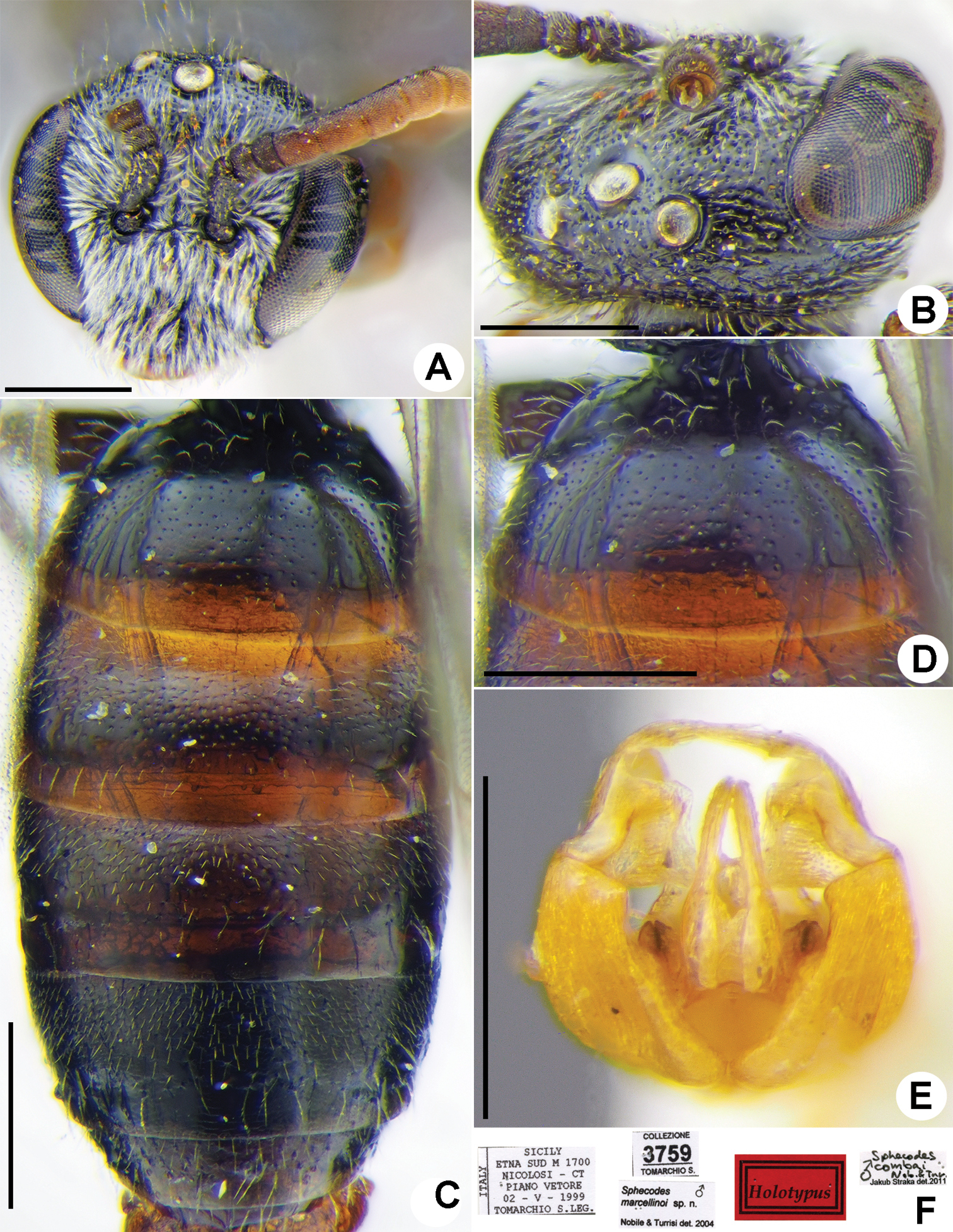 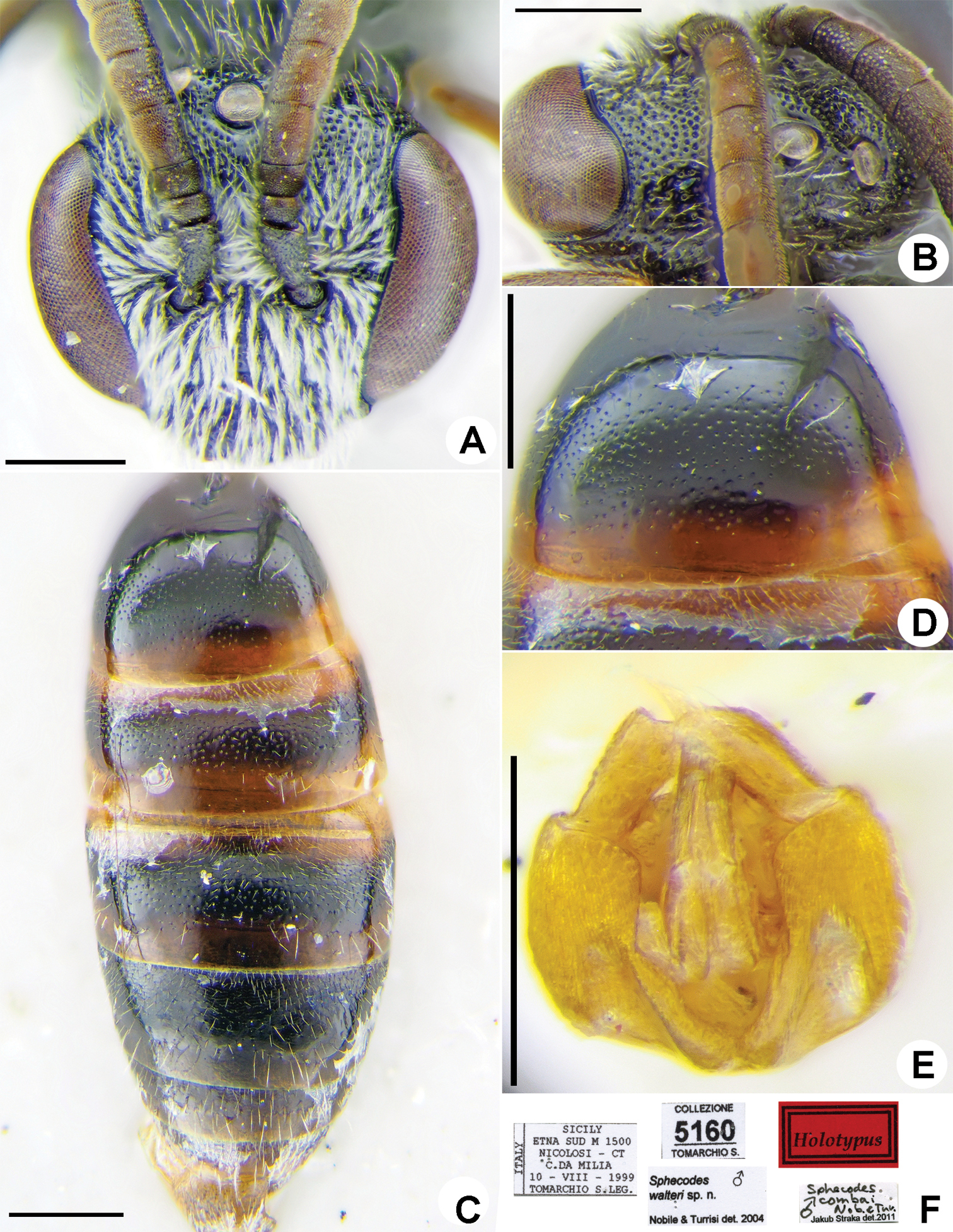 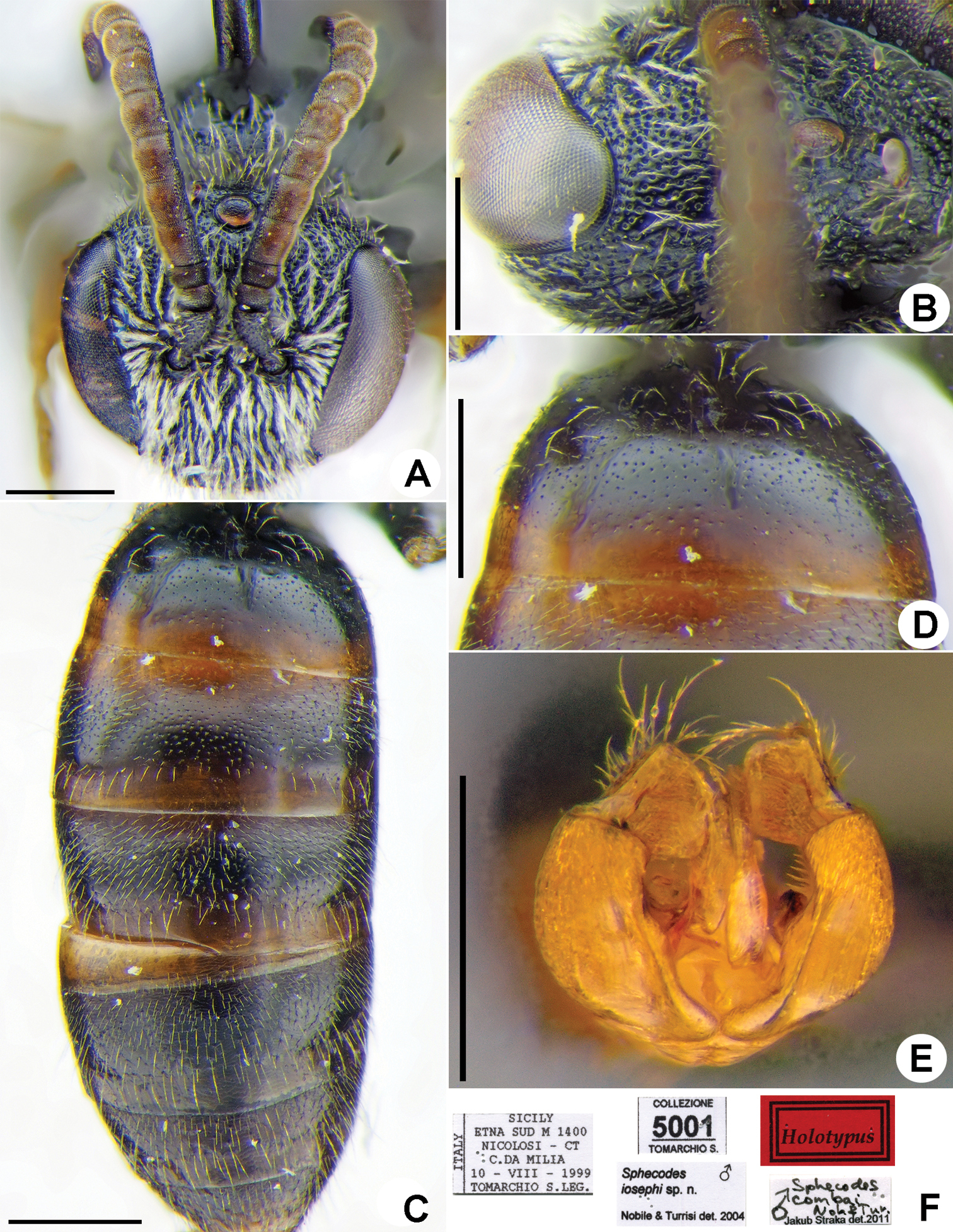 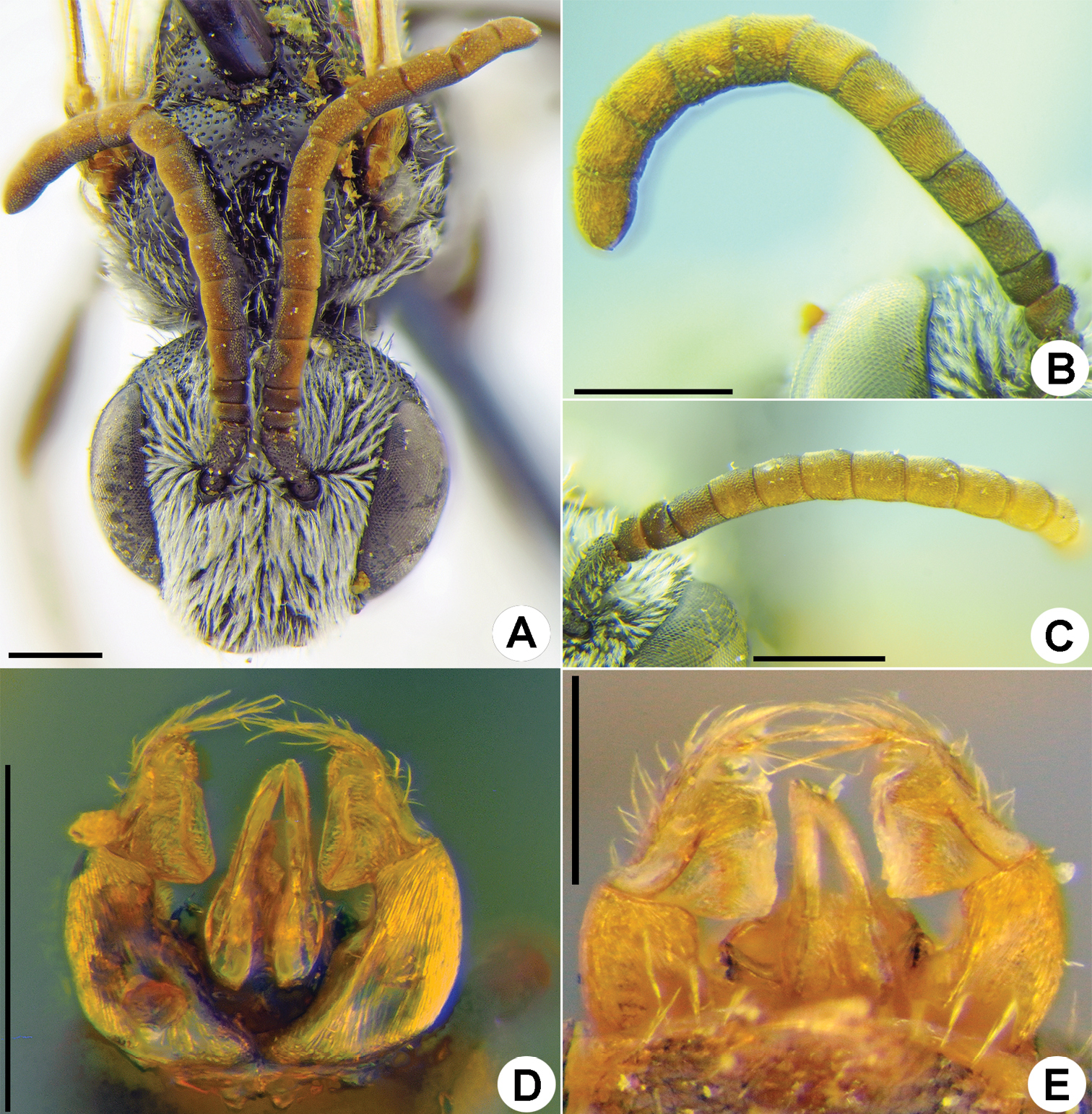