Tadpole external morphology. The tadpoles of Physalaemus riograndensis  ( Fig. 4View FIGURE 4 A, B) belong to the benthic ecomorphological guild (section II: A: 1) of McDiarmid and Altig (1999) as revised from Altig and Johnston (1989). At stages 31–36 they are about 14.7 ± 1.02 mm of total length, and they have a depressed body ( BMH / BMW = 0.73 ± 0.03). The body length is about 40 % of total length (BL/TL = 0.39 ± 0.01), body shape is ovoid or oval in dorsal view and the maximum width is placed just behind the cephalic region. In lateral view, the ventral contour of the body is slightly convex, near flat. The snout is rounded in dorsal and lateral views. The nostrils are rounded; they are dorsolaterally positioned (EN/BWE = 0.35 ± 0.02), at mid distance between the tip of the snout and the eyes (FN/ END = 1.09 ± 0.18), more visible dorsally than laterally. The opening is anterodorsally directed and presents a slightly elevated and unpigmented rim, with a small, elevated and pigmented fleshy projection in the medial margin. The eyes are large (E/BWE = 0.26 ± 0.03) and dorsolateral (IOD/BWE = 0.65 ± 0.02), not visible from ventral view. Pineal organ and lateral line system were not observed. The spiracle is single, lateral, sinistral, short, posterodorsally directed and placed in the second third of the body (RSD/BL = 0.67 ± 0.03), with its inner wall fused to it except for its very distal end; its opening is oval, placed just behind body midline, being its diameter slightly smaller than the tube diameter, and it is visible laterally, sometimes dorsally. The intestinal assa was observed approximately at the center of the abdominal ventral surface. The vent tube is medial; in one specimen it opened to the left and in another one it opened to the right due to a fold in the origin of the ventral fin; it is separated from the abdominal skin by a weak fold interrupted at the midline. The tail is large (TAL/TL = 0.61 ± 0.01), and both fins are slightly higher than the body height (FH/ BMH = 1.08 ± 0.08). The dorsal fin originates slightly anteriorly to the body-tail junction and it has a regularly curved, convex free margin, and is somewhat higher than the ventral fin. The ventral fin originates from the longitudinal axis of the posterior wall of the vent tube and its free margin is smoothly convex. The tail axis is straight, and the tail smoothly stretches towards the tip, ending rounded. The tail musculature almost reaches the tail end. The oral disc ( Fig. 4View FIGURE 4 C) is anteroventral, small (OD/BMW = 0.29 ± 0.02), emarginated, and has a large dorsal gap (DG/OD = 0.71 ± 0.07). Marginal papillae are arranged in a single row, alternate in subangular regions. Two ventrolateral gaps were present in all but one example, one at each side of the oral disc, usually separated by few marginal papillae (2–10). Papillae are simple, longer than wide, subconical, with rounded tip. Submarginal papillae are absent. The upper jaw sheath is widely arch-shaped, and the lower jaw sheath is V-shaped. Both jaw sheaths are finely serrated and pigmented distally for about 1 / 5 to 1 / 4 of their widths. Labial tooth row formula is 2 (2)/ 2 (1), the gap in A 2 is evident but that of P 1 is very narrow, and P 2 is about 2 / 3 the length of the other rows. Measurements are shown in Table 1.

Tadpole coloration in preservative. The body and caudal musculature are brownish dorsally, with small darker spots along the dorsal midline which are more or less defined. Laterally, the body and tail musculature pigmentation become more irregular, especially below the body midline. The ventral surface of the body presents scarce marginal pigmentation, mainly in the gular and branchial regions. The centre of the abdomen is almost unpigmented and internal organs are visible. Both fins are scarcely pigmented, with small and sparse groups of melanophores.

Tadpole morphological variation: Lot ZVCB 15198, papillation and LTRF with the same characteristics as lot 15196. Tadpoles of Lot ZVCB 15197 has the same LTRF but three examples have a double row of marginal papillae in infraangular regions, one of them also exhibits double row of papillae in mental region and two submarginal papillae, another one has no ventrolateral gaps; two examples have the vent tube left sided. 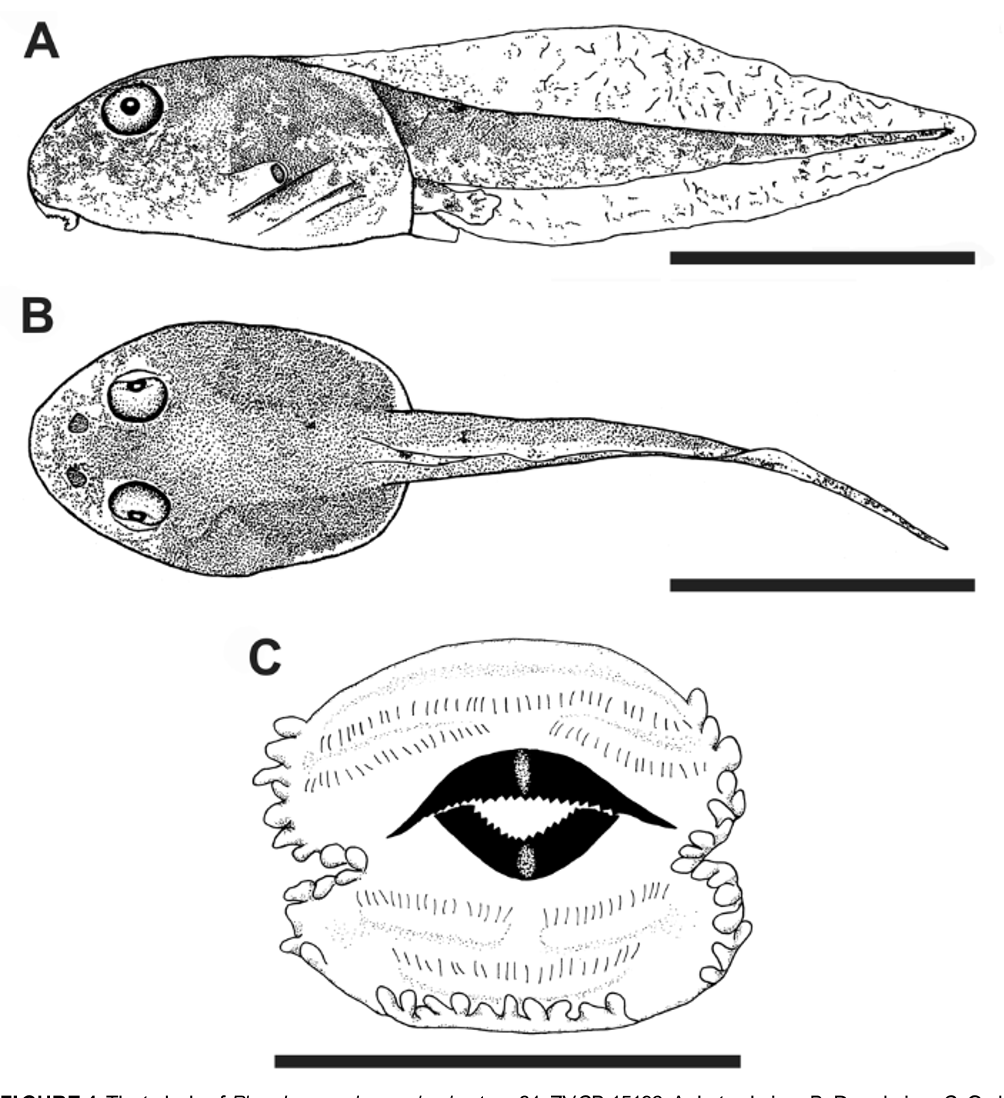