Diagnosis. Trichomycterus anhanga differs from all other congeners by its reduced latero-sensory canal system, which is restricted to a short section between LL1 and LL2, on the pterotic, and entirely absent on the rest of body and cranium. It also differs from all other species currently in Trichomycterus except T. hasemani and T. johnsoni by the single hypertrophied cranial fontanel, which occupies nearly the entire skull roof (vs. fontanel restricted to one or more narrow spaces along the dorsal midline of skull).

Trichomycterus anhanga differs further from T. hasemani and T. johnsoni by the presence of three (i,2) pectoral-fin rays (vs. i,3-5 rays); the absence of pelvic fins and girdle (vs. presence); the reduced oral dentition, with only two teeth each on premaxilla and dentary (vs. teeth numerous in both upper and lower jaws); the reduced pharyngeal dentition, with only a single tooth in the lower pharyngeal plate and none in the upper (vs. pharyngeal dentition well developed); the presence of five to seven odontodes in the interopercle (vs. 9-10 in T. hasemani and 9-12 in T. johnsoni ), the absence of procurrent rays anterior to dorsal and anal fins (vs. one vestigial ray anterior to the main ray series in each fin), the lack of a lateral series of dark spots (vs. presence); the presence of a small dark spot on the ventral surface of the lower lip (vs. absence); the narrow comma-shaped palatine, lacking a posterior process (vs. palatine broad, with large posterior process) ( Fig. 2 View Fig ); the lack of a parasphenoid (vs. parasphenoid present); the presence of a single pair of pleural ribs (vs. two or three), the insertion of the first dorsal-fin pterygiophore anterior to the neural spine of the 16 th vertebra (vs. 17 th or 18 th vertebra in T. johnsoni , and 18 th to 20 th in T. hasemani ). It can be further distinguished from T. hasemani by the insertion of the first anal-fin pterygiophore anterior to the hemal spine of 16 th vertebra (vs. anterior to hemal spine of 19 th- 20 th vertebra); and from T. johnsoni by the absence of irregular longitudinal dark lines on the sides of the body (vs. presence), the absence of a dark midventral line (vs. presence), and the smaller interorbital distance (17.8-23.2% SL vs. 25.5- 37.0% SL).

Head depressed, its greatest width across bases of interopercular odontodes; snout round in dorsal view; lateral surface of head with well-developed muscle protruding from posterior margin of eye to opercular patch of odontodes. Eye small and circular, with well-defined margin, located on anterior half of HL, dorsally oriented.

Color in ethanol. Ground color cream. Flank, dorsum, and posteroventral region with tiny light brown spots, irregular in shape. Dorsum with series of four to eight transverse dark brown spots; when eight, first to fifth ones anterior to dorsal fin insertion, sixth over dorsal-fin origin, seventh on vertical line through posterior margin of dorsal fin and eighth on posterior portion of caudal peduncle. Series of three to five dark brown transverse spots on ventral surface of body; first one immediately anterior to anus, second at origin of anal-fin base, third immediately posterior to anal-fin base, fourth approximately in middle of caudal peduncle, and fifth near insertion of first ventral caudal-fin procurrent rays.

Etymology. The specific name anhanga is a reference to the Amazonian Anhangá legend, a spirit that lives in the woods,

protector of animals. Its presence can be detected by a whistle and thereafter, the animal that was being hunted disappears. Anhangá is thus regarded as a protector of forest life. A noun in apposition. 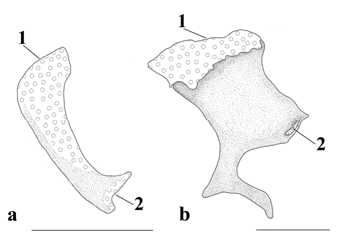 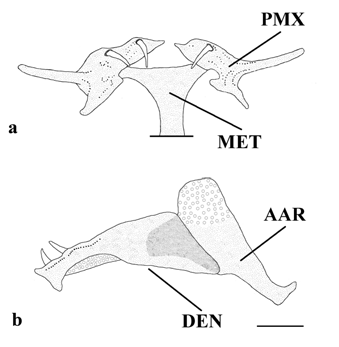 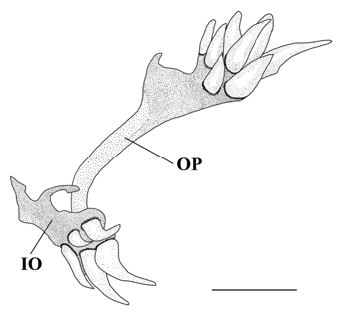 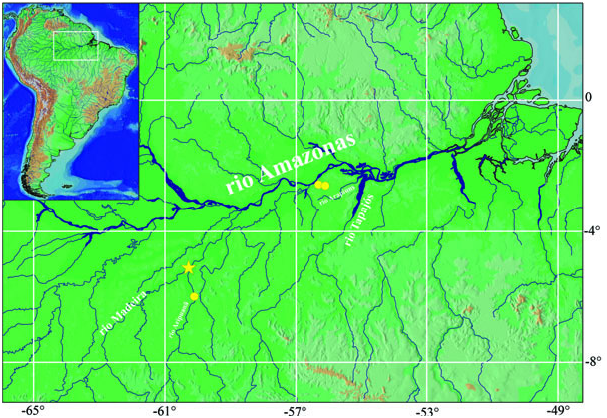