The six species in this genus are inquilines, or possibly predators, in galls of various cecidomyiids in the Nearctic, Neotropical, and Oriental regions ( Gagné, 1989; Gagné & Jaschhof, 2014). Two species are currently known from North America, Youngomyia quercina Felt, 1911   from Quercus   in California and Y. podophyllae   , which is particularly associated with Asphondyliini   galls on Asteraceae   host plants in the north-eastern US. In the present study, the large and very active larvae of Y. podophyllae   were regularly found in groups of between three and five in galls of all the surveyed Asphondylia species   , but were especially common in A. pseudorosa   sp. nov. and A. monacha   galls. It is unclear whether they actually prey on the gall inducer’s larva, or kill it indirectly by feeding on gall tissue, because feeding behaviour has not been observed directly. Youngomyia podophyllae   larvae were abundant in galls from June to September, and the species probably completes at least two generations during this time. The larvae leave the gall to pupate in the ground, and those of the last (fall) generation most probably overwinter in the soil as third instars.

Male abdomen: Tergites 1–7 rectangular, with posteri- or row of setae, a group of setae at mid-proximal part, and pair of proximal trichoid sensilla; tergite 8 completely undifferentiated from surrounding membrane. Sternites 2–7 rectangular, with posterior row of setae, numerous setae on proximal half, and a pair of closely adjacent trichoid sensilla. Sternite 8 smaller and more setose than preceding sternite.

Bright orange, very long and slender. Length 2.19– 5.14 mm (N = 19). Integument covered by tiny spicules, spiracles conspicuously protruding above body surface. Antennae about 1.5 times as long as wide; cephalic apodeme much longer than head capsule. Spatula ( Figs 99, 100 View Figures 96–101 ) long and robust, with two large triangular teeth and long shaft, on each side with two groups of three tiny lateral papillae; two setose, one asetose in each group. Terminal segment on each side with four setiform papillae on slightly elevated bases.

Small pointed antennal horns; no facial horns. Face on each side with pair of papillae medially, one setose, one asetose, and a group of three asetose papillae laterally. Prothoracic spiracle conspicuously long, pointed and strongly sclerotized; trachea ends at apex. Abdominal segments, except for first and last, each with one proximal row of long and slender barbed spikes, and otherwise covered by tiny spicules.

Several larvae of this species were found in Felt’s slidemounted collection, in which they were attributed to Asphondylia   because they were taken from Asphondylia   galls; however, larvae of the two genera can be easily distinguished from each other and the labels on the relevant specimens were therefore amended.

The complete molecular data set of cytochrome c oxidase subunit I (COI, 53 sequences) and elongation factor 1 alpha (EF-1α, 33 sequences) consisted of 1047 positions (690 COI and 357 EF-1α). All sequences are deposited in GenBank (http://www.ncbi.nlm.nih.gov/) and accession numbers are provided in Table 1. Tree topologies inferred from the mitochondrial COI and from the nuclear EF-1α genes are largely compatible (Figs 102, 103). The combined phylogenetic analysis yielded five well-supported clades representing at least six species of Asphondylia   on goldenords ( Fig. 104 View Figure 104 ). The previously described species A. monacha   and A. solidaginis   , and the newly described species A. pseudorosa   sp. nov., A. rosulata   sp. nov., and A. silva   sp. nov., are well supported in this analysis, corroborating inferences drawn from morphological and life-history data. A fifth, early branching clade includes individuals from three different Solidago   hosts as well as Asphondylia recondita   from Aster novaeangliae   . This clade requires further morphological and molecular sampling before systematic conclusions can be reached; the taxa represented by this clade are therefore not described in the present paper.

Analysis of EF-1α (Fig. 102) provides enhanced resolution and support at deeper nodes in the tree, but does not differentiate between A. silva   sp. nov. and A. rosulata   sp. nov., which form distinct species in the COI tree ( Fig. 103 View Figure 103 ), where shallower nodes are

exhibits a very similar pattern but uses S. rugosa   rather than S. altissima   as its primary host. Despite the morphological and biological similarity between these two Asphondylia species   , they are not closely related. Instead, the sister species to A. rosulata   sp. nov. is A. silva   sp. nov., which is found exclusively on Soli- dago caesia   , on which it completes multiple generations in tiny bud galls throughout the season. The A. monacha   clade comprises individuals from complex rosette galls on S. juncea   , S. erecta   , and S. uliginosa   that represent the summer generation of this species. Also included in this clade are individuals from simple bud galls on S. altissima   that represent the previously unknown spring generation of A. monacha   . Figure 103. Phylogenetic tree of Asphondylia species associated with goldenrods based on Bayesian analysis of partial sequence of the cytochrome c oxidase subunit I (COI) mitochondrial gene. Support values are shown next to nodes. 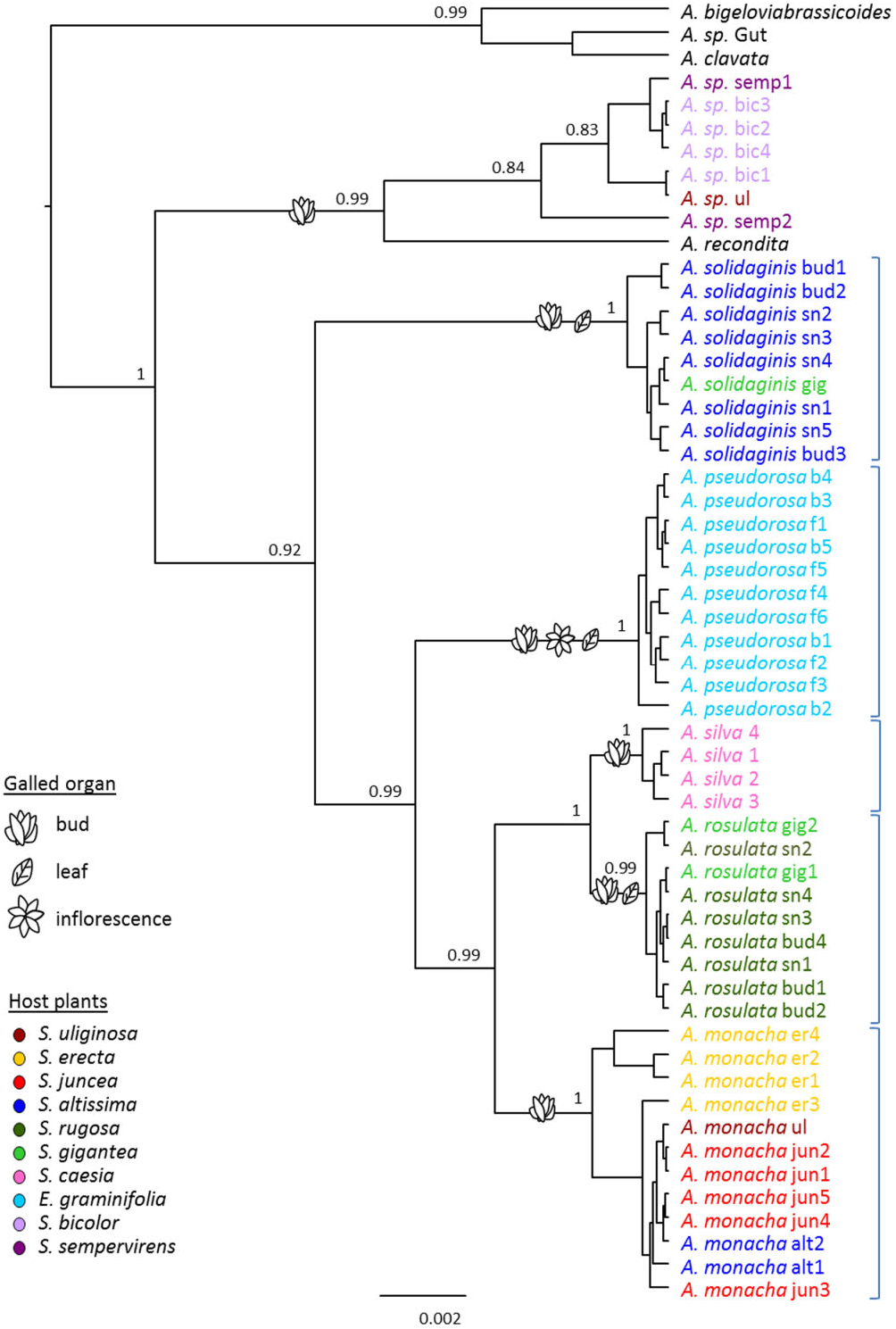 Figure 105. Reconstruction of the evolution of host-plant use by the Asphondylia species associated with goldenrods under maximum parsimony. Branch colours correspond to host species. 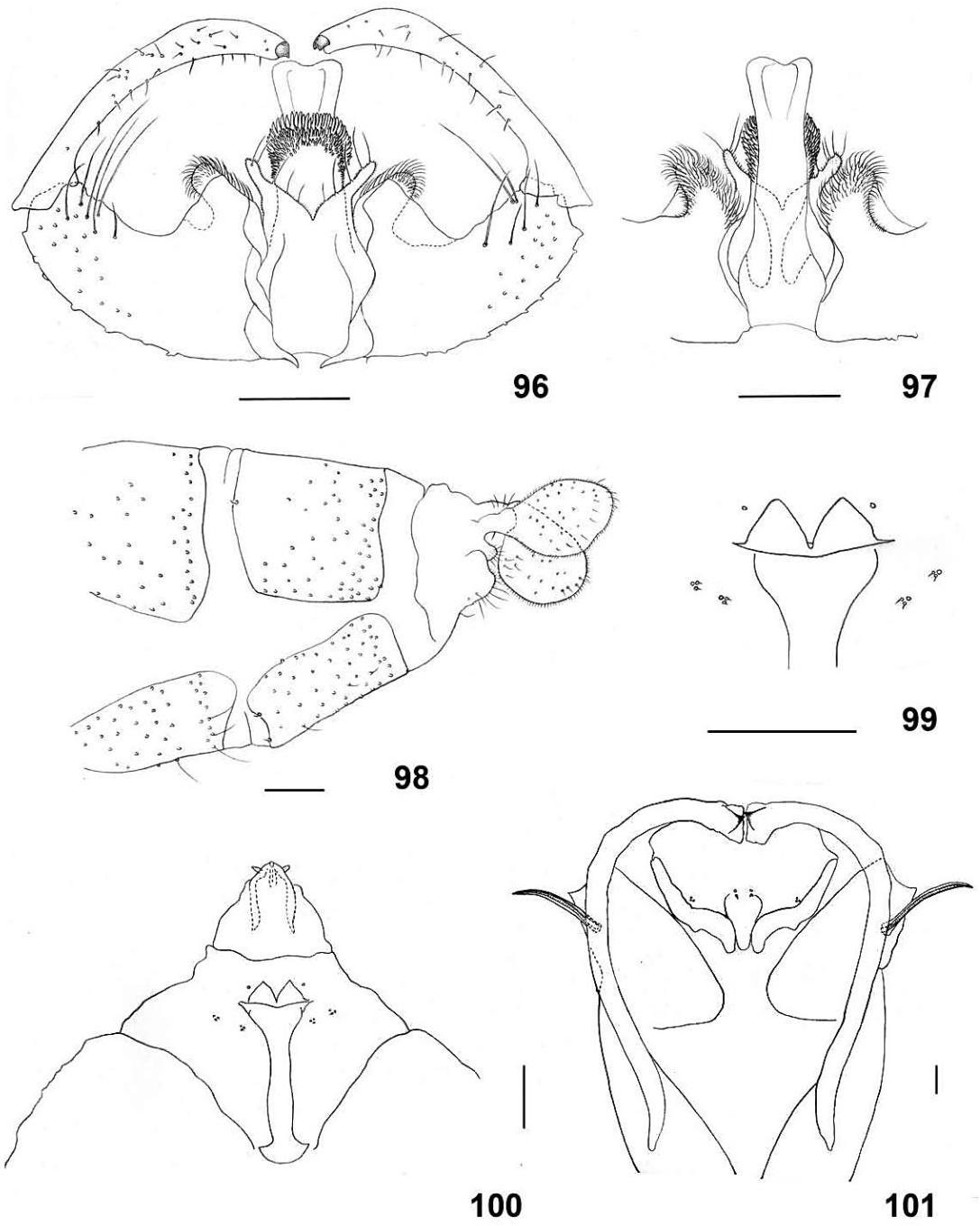