Material examined. Nephochaetopteryx subaurata   was described based on the holotype ♁ deposited in Staatliches Museum f̹r Naturkunde Stuttgart ( SMNS), Stuttgart, Germany. The holotype was not examined directly, therefore the redescription is based on photographs of the holotype and figures from the original description. The label of the holotype shows the following data: S. José n̂rdl. 80 Km Boliv. X. 26 [handwritten by Lindner] / Lindner, D Chaco Exped [printed]   .

Abdomen. Tergites brown with a band of silvery microtomentum on anterior 4/5 of dorsal and lateral surfaces.

Terminalia ( Fig. 32B View FIGURE 32 ). Sternite 5 brown; with a deep cleft, nearly reaching middle region; lobe rounded and with a tuft of short setulae; arms divergent, short and narrow. Cercus shorter than epandrium, with a rounded projection covered with spines on inner lateral margin in distal half and with tip pointed and curved ventrally. Cercal base with long and thick setae; cercal prong with short setae. Pregonite longer than wide, with rounded apex. Postgonite longer than wide, with pointed apex. Distiphallus with apical margin rounded and ventral margin serrated. Vesica elongate and angled in lateral view.

In the catalogue of Sarcophagidae   of the Americas south of the United States ( Lopes 1969) and in the Catalogue of the Sarcophagidae   of the World ( Pape 1996), the type locality of N. subaurata   is given as San José in Argentina, which is the same locality mentioned in the original description by Engel (1931). According to Dufek et al. (2020), San José is “Estancia San José”, a province of Formosa in Argentina. However, Dr. Erwin Lindner (collector of the holotype) was in San José, northeast Argentina, in October 1925, and he collected around San José de Chiquitos in Bolivia in September and October 1926. Therefore, as in the holotype label the word “Boliv,” and the date “X.26” are clearly stated, the locality “S. José” cannot be in Argentina, as Engel (1931) presumed (Dr. Hans-Peter Tschorsnig, pers. comm.).

Until recently, N. subaurata   was known only from the holotype male, but another specimen was recentely recorded from the Humid Chaco region, Argentina by Dufek et al. (2020)   . 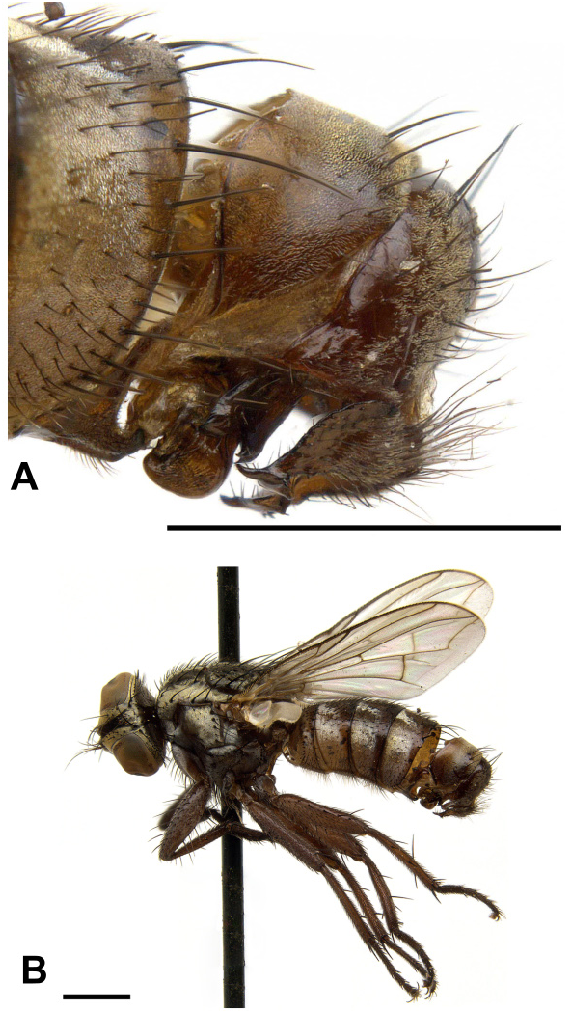