The composition of the group changes as follows: to the original core group consisting of three species ( Ph. halabala ; Ph. sabah ; Ph. sepaku ) we add two newly described species ( Ph. ubin Huber , sp. nov.; Ph. lintang sp. nov.) as well as Ph. erawan . The latter species was originally part of another problematic species group ( Pholcus quinquenotatus group; Huber 2011: 290). It lacks the distinctive dorsal flap on the procursus that is present in the other five species of the core group, and the hairs in the male ocular area are not particularly strong, but it is moved into the core group because (1) it builds the same distinctive web closely attached to the leaf surface as the five other species; (2) webs are provided with facultative silk tufts like in Ph. halabala and Ph. sepaku (otherwise only known in the African genus Smeringopus Simon, 1890 ; Huber 2012); (3) females carry the egg-sac under the body like Ph. halabala and Ph. sepaku , which is unique among Pholcidae ; (4) life specimens have an almost identical distinctive pattern of large whitish to yellowish and black spots on the abdomen, and on the carapace a pair of V-marks; and (5) the procursus is provided with a distinctive retrolateral distal pocket also present in Ph. halabala ( Figs 21–22 View Figs 18 – 28 , 41 View Figs 39 – 48 ). Preliminary molecular data (A. Valdez-Mondragón, B.A.

In addition to this core group, we include in the Ph. halabala group two further species that were previously part of the Pholcus quinquenotatus group ( Ph. sudhami Huber, 2011 ; Ph. pakse Huber, 2011 ) as well as two newly described species ( Ph. kuhapimuk sp. nov.; Ph. khaolek sp. nov.).Again, preliminary molecular data (A. Valdez-Mondragón, B.A. Huber & D. Dimitrov unpublished data) strongly support a close relationship of these four species with the core group, and at least Ph. sudhami and Ph. pakse share some morphological similarities with the core group (carapace and abdomen pattern, male eye triads on low humps, large AME, male cheliceral apophyses with modified hairs), but no putative morphological synapomorphy is known that would support this close relationship. The microhabitat of these four species differs from the core group (rocks and tree roots rather than foliage); egg-sacs are carried in front of the body as in typical pholcids; webs were never seen to be provided with silk tufts. In addition, males of Ph. sudhami and Ph. pakse lack stronger hairs in the ocular area, and both species lack the bulbal appendix.

Three species originally assigned to the halabala group are kept in the group simply for the lack of a better solution: Ph. pyu Huber, 2011 ; Ph. elongatus (Yin & Wang, 1981) ; and Ph. exceptus Tong & Li, 2009 . Data on natural history and ultrastructure are not available for any of them, nor is any of them included in our preliminary molecular analysis (A. Valdez-Mondragón, B.A. Huber & D. Dimitrov unpublished data). We speculate that Ph. pyu may in fact belong to this group, but the other two species are quite certainly misplaced. Pholcus elongatus lacks AME; males in this species have short eye stalks and pointed cheliceral apophyses without modified hairs; females have a long epigynal scape. We speculate that the closest relatives of Ph. elongatus are the Taiwanese species Ph. pingtung Huber & Dimitrov, 2014 and Ph. chengpoi Huber & Dimitrov, 2014 (six eyes; similar cheliceral apophyses; scape directed toward anterior). Pholcus exceptus is a mysterious species with entirely reduced distal cheliceral apophyses.

All six species of the core group were observed in the field. At most localities, abundances seemed very low. Surprisingly, several species were partly or exclusively found in degraded forests. All specimens seen during the day were tightly pressed against the undersides of mostly large leaves. Webs consisted mainly of round platforms with a diameter of about 10 cm; most of the platform was closely attached to the leaf surface. Small silk tufts ( Figs 4 View Figs 1 – 8 , 16 View Figs 9 – 16 ) were observed in some webs of three species ( Ph. halabala ; Ph. erawan ; Ph. sepaku ), but may occur in other species as well (very few specimens seen in other species). The same applies to the peculiar position in which egg-sacs are held by females: in Ph. halabala , Ph. erawan and Ph. sepaku (and possibly in close relatives), the egg-sac is carried under the prosoma rather than in front of it ( Figs 3, 5–6 View Figs 1 – 8 , 16 View Figs 9 – 16 ). For further details, see individual species descriptions below.

Three of the four species assigned tentatively to the halabala group based on preliminary molecular data were observed in the field ( Ph. kuhapimuk sp. nov.; Ph. khaolek sp. nov.; and Ph. sudhami ), and these were mostly found on rocks at cave entrances, with the body flat on the rock surface. Only Ph. sudhami at Erawan was mostly found on exposed tree roots at the riverside. Webs were either barely visible (a few threads close to the rock surface) or consisted of very delicate small domed sheets attached to the rock ( Ph. khaolek sp. nov.). Silk tufts were not seen in any of these webs. Egg-sacs were carried in front of the body as in typical pholcids ( Fig. 51 View Figs 49 – 56 ).

The Ph. halabala group is restricted to Southeast Asia, from Myanmar and southern China to Sumatra and Borneo ( Figs 17 View Fig. 17 , 57 View Fig. 57 ). Fig. 17. Known distribution of the core group of the Pholcus halabala species group. 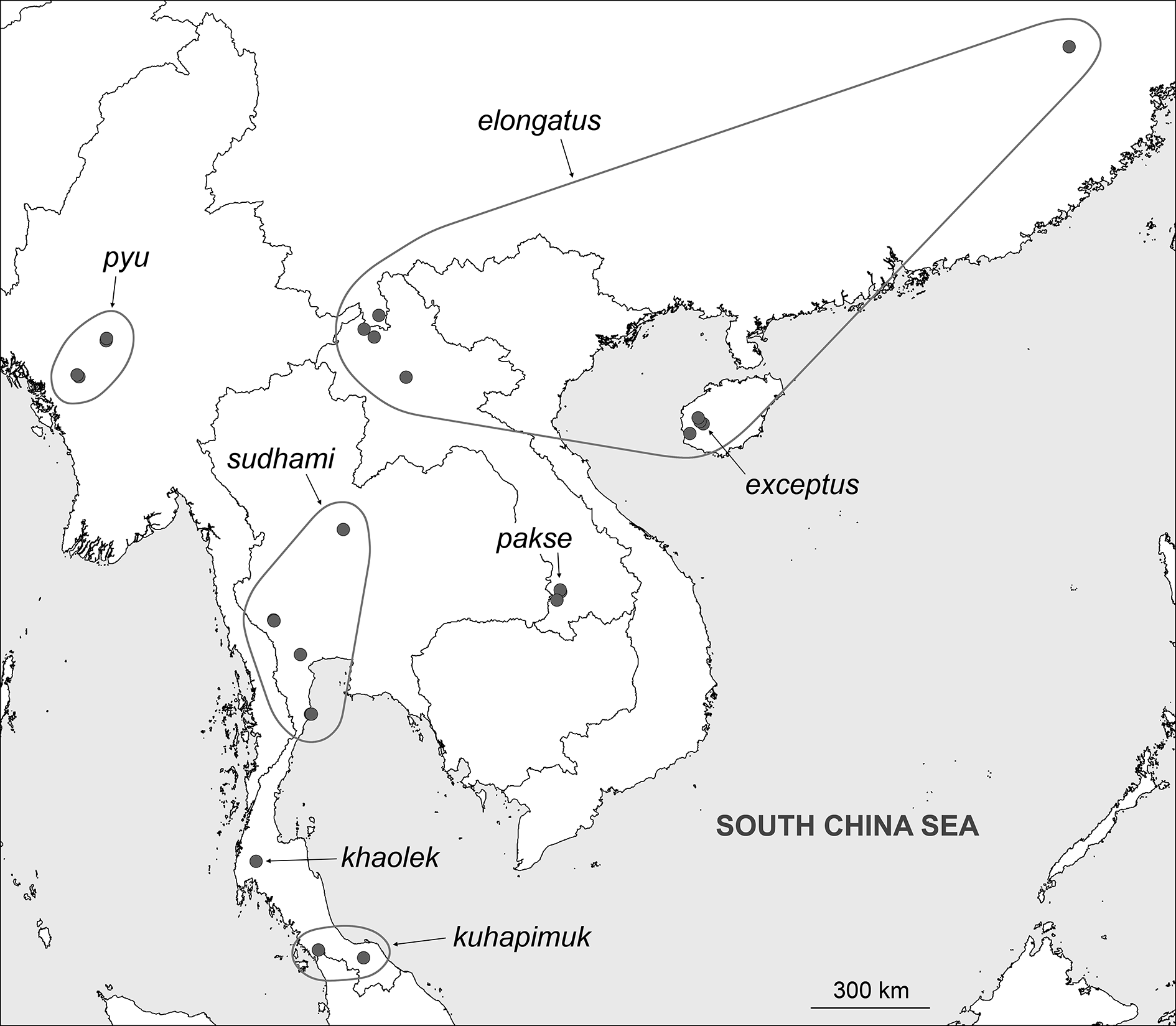