Oxynoemacheilus hanae was found in sympatry with O. gyndes and O. kurdistanicus ( Fig. 11 View FIGURE 11 ) and O. parvinae is known from the upper Sirvan drainage.

Oxynoemacheilus hanae is distinguished from O. euphraticus and O. kurdistanicus by having no or a very short incision in the upper lip (vs. a deep median incision), a series of dark-brown roundish or ovoid blotches along the midlateral flank (vs. narrow and regularly or irregularly set and shaped bars at least on the flank behind the caudal-fin base), the midlateral blotches not reaching down to ventral side of caudal peduncle (vs. reaching), the midlateral blotches are usually not confluent with the saddles on the back, but often overlapping (vs. bars on the flank behind the dorsal-fin-base usually confluent with saddles on the back). A few individuals of O. hanae have one or two midlateral blotches being vertically elongated, forming a bar and rarely this bar is then connected to a saddle on the back. Also, O. hanae has a horizontal series of isolated patches of brown blotches or a row of small, brown spots below the midlateral blotches (vs. lower flank without colour pattern or colour pattern of midlateral flank reaching down to lower flank) and the caudal peduncle is 1.4–1.8 times longer than deep vs. 1.9–2.2 in sympatric O. kurdistanicus .

Oxynoemacheilus hanae is distinguished from O. karunensis by the two black blotches or spots at the caudalfin base usually being invisible in life, indistinct and overlaid by a chevron-shaped, dark-brown or black bar (vs. prominent in life and preserved fishes), the flank below the lateral series of blotches without colour pattern except a longitudinal series of isolated patches of blotches or a row of small dark-brown spots (vs. lower flank with irregularly shaped and set brown blotches forming a continuous pattern with lateral and dorsal flank pattern), lacking minute dark-brown spots on the back, above the lateral midline and the caudal peduncle (vs. present) and having a small but well developed pelvic axillary lobe fully attached to the body (vs. no lobe or lobe rudimentary, shallow and knob-shaped).

Oxynoemacheilus hanae is distinguished from O. bergianus , O. longipinnis and O. parvinae by having two bold, black blotches or spots on the caudal-fin base, usually overlaid by a chevron-shaped, dark-brown or black bar (vs. no bold, black pattern on the caudal-fin base in O. bergianus , O. longipinnis and O. parvinae ), flank below lateral series of blotches with isolated patches of blotches or a row of small dark-brown spots (vs. lower flank without colour pattern or colour pattern of midlateral flank reaching down to lower flank) and a deeper caudal peduncle (its length 1.4–1.8 times in it depth vs. 1.7–2.2 in O. longipinnis and 2.3–3.1 in O. bergianus ).

Dorsal fin with 8½ branched rays. Anal fin with 5½ branched rays. Caudal fin with 9+8 branched rays. Pectoral fin with 10–11 and pelvic fin with 8 rays. Body covered by embedded scales. Lateral line complete, reaching to caudal-fin base. One or two lateral and one central pores in supratemporal canal. Anterior nostril opening at end of a low, pointed and flap-like tube. Posterior tip of anterior nostril overlapping posterior nostril when folded backwards. A suborbital groove in males. Mouth small, arched ( Fig. 10 View FIGURE 10 ). Lips thick, with poorly marked furrows. A deep median interruption in lower lip. No or a very short median incision in upper lip. Processus dentiformis narrow and blunt. No median notch in lower jaw. Barbels long, inner rostral barbel reaching to base of maxillary barbel; outer one reaching to vertical of anterior margin of eye or to anterior half of eye. Maxillary barbel reaching vertical to posterior half of eye. Male with longer pectoral fin, covered with many small unculi on dorsal surface of unbranched and branched rays 1–3 and a shallow suborbital groove, almost completely continuous with surrounding skin in some individuals.

Coloration. Body yellowish in life and preserved individuals. Head plain brown on top or with mottled pattern, cheeks with fine dark-brown spots or mottled pattern, without colour pattern ventrally. No pigmentation below a line from pectoral-fin base to anus. Back dark- or pale-brown with two, rarely one wide, dark-brown saddles, wider than interspaces and fused to lateral bars or blotches in few individuals. A large, roundish, dark brown blotch at dorsal fin-origin and below posterior half or dorsal-fin base. No, one or two narrow dark-brown saddles on upper caudal peduncle, usually fused with blotches or bars on flank. Flank with a bold dark-brown inner axial stripe and 5–8, epidermal, large, dark-brown, irregularly shaped, horizontally elongated blotches along lateral midline, individual blotches vertically elongated to short bars in few individuals. Blotches often fused, not forming a stripe, not reaching to belly or to ventral side on caudal peduncle. Flank below lateral series of blotches with isolated patches of blotches or a row of small dark-brown spots, absent in two out of 80 individuals. Flank above midlateral row of blotches mottled, in front of a vertical of last dorsal-fin ray often with a depigmented stripe between midlateral blotches and blotches on back. Chevron shaped bar at caudal fin base, dissociated into a large lower blotch and a small spot or into two, usually indistinct spots in few individuals, usually fused to the last midlateral blotch. Two black blotches on caudal-fin base in some individuals overlaid by chevron-shaped bar. In preserved or stressed fishes, overlaid colour pattern might fade and two black blotches become visible. Last unbranched dorsal-fin ray with a black spot at about midlength of ray. Dorsal- and caudal-fins with a tessellated pattern on rays. Anal-, pelvic- and pectoral fins usually hyaline, with few dark-brown spots on rays in some individuals.

Distribution. Oxynoemacheilus hanae was found in a headwater stream ( Fig. 12 View FIGURE 12 ) of the upper Sirwan (Kurdish) drainage [Sirvan (Persian) or Diyala (Arabic)] in Iraq. Besides the type locality, it was also found in a stream at the village Saraw (35°22'20"N 45°50'06"E). The Sirvan is a left side tributary of the Tigris flowing down from the Zagros Mountains.

Etymology. The species is named for Hana A. Raza who works for Nature Iraq in Sulaymaniyah. Hana accompanied JF during fieldwork in Iraqi Kurdistan. A noun in genitive, indeclinable.

Comparative material. Additional materials of Oxynoemacheilus species examined other than those below are listed by Freyhof et al. (2012) and Freyhof (2016). 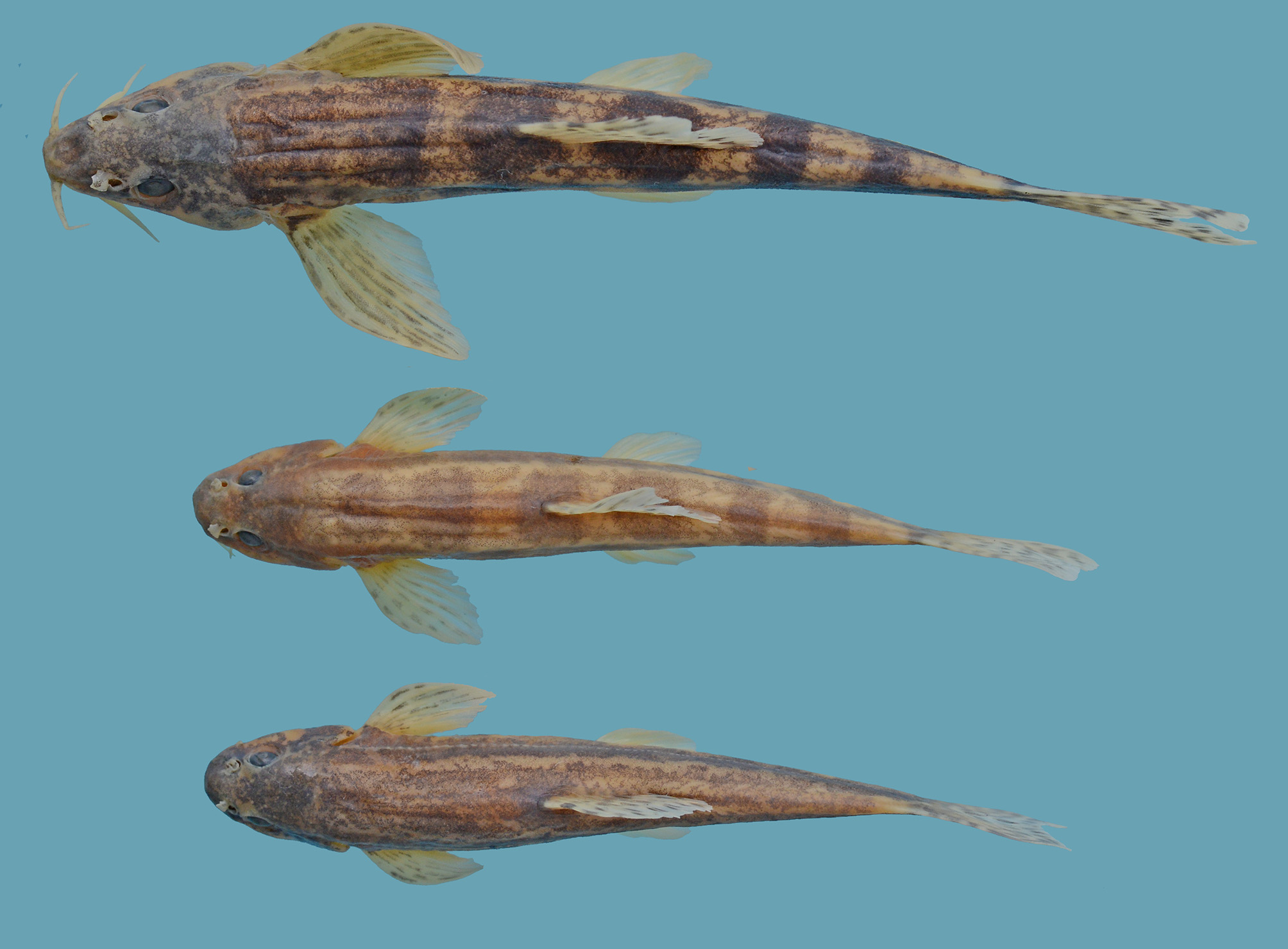 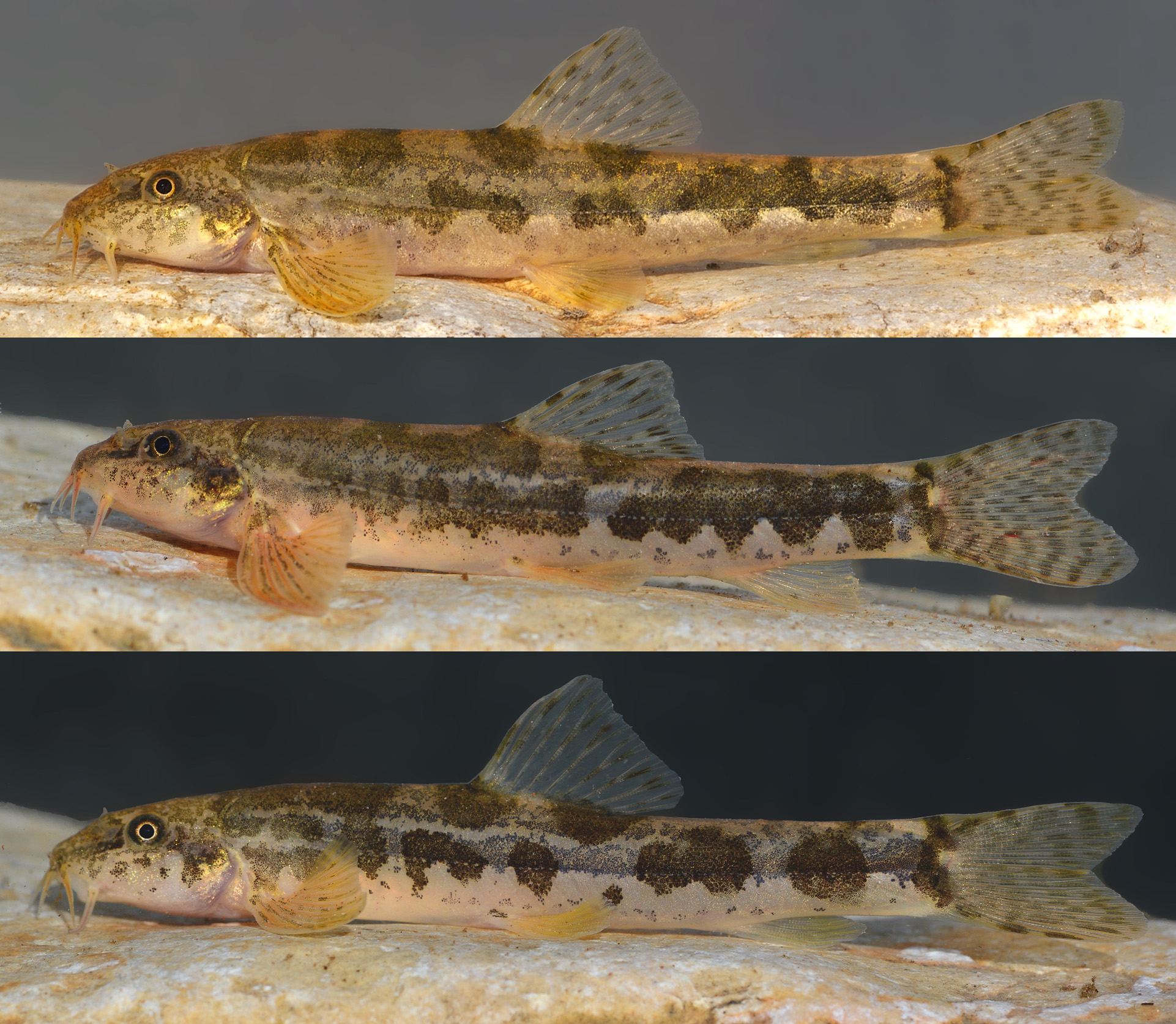 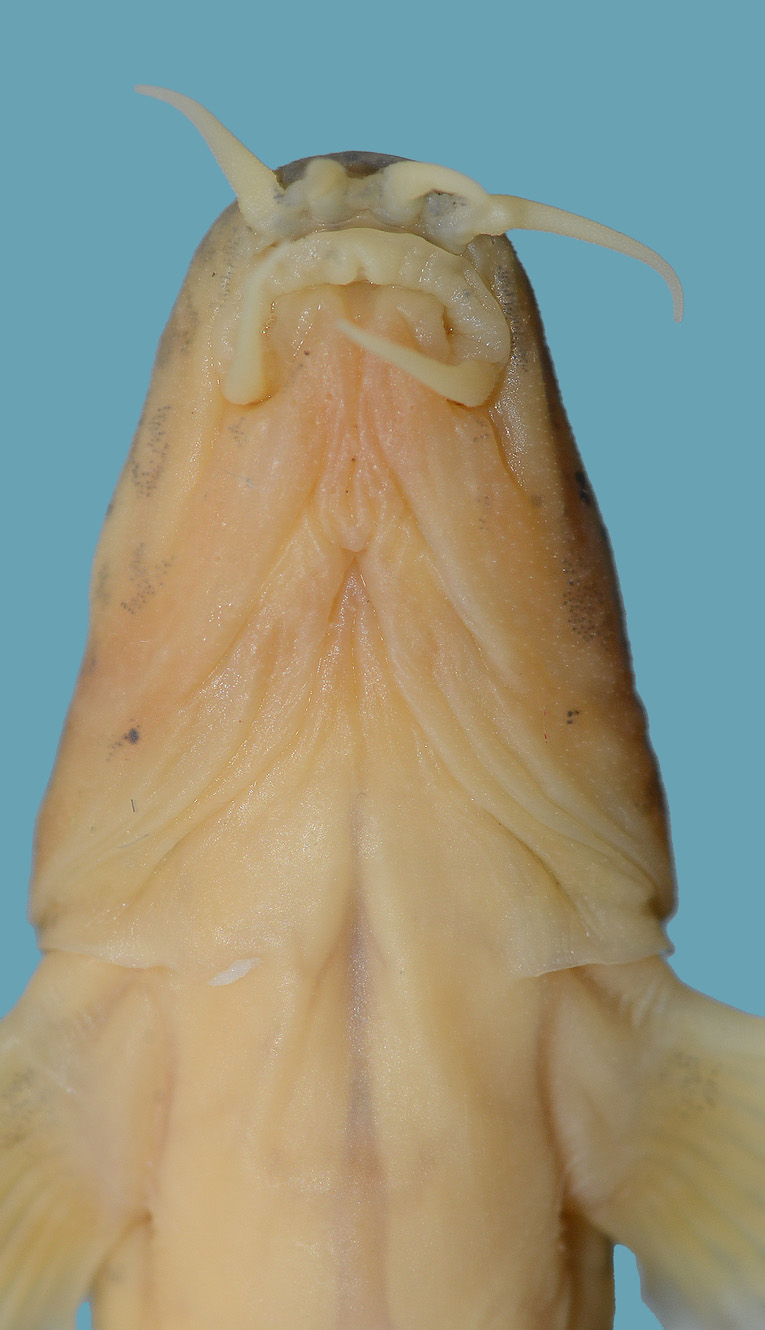