Ceromasia aurifrons   and C. auricaudata   were considered to be distinct species until recently, with the former having an eastern distribution and the latter a western distribution (e.g., Sabrosky & Arnaud 1965). O’Hara and Wood (2004) synonymized C. aurifrons   with C. auricaudata   and gave the known distribution of this species as transcontinental in Canada and ranging southward to California, New Mexico, Kansas, and Massachusetts. Adults are typically 7–9mm long, rather robust, and mostly gray with a mottled abdomen. The head and tip of the abdomen are usually golden, though less so in eastern specimens. The egg, three larval instars, and puparium of C. auricaudata   were described and illustrated by Coppel and Maw (1954 a). Ceromasia auricaudata   was included in a key to the puparia of dipterous parasitoids of Choristoneura   species by Ross (1952, as separate species C. aurifrons   and C. auricaudata   ) and in a key to the adults of dipterous parasitoids of Choristoneura occidentalis   (as C. fumiferana   ) in British Columbia by Coppel (1960).

Ceromasia auricaudata   belongs to the Goniini   and produces microtype eggs that are ingested by the host. Further information on general goniine biology is given below under Cyzenis incrassata   . Ceromasia auricaudata   attacks late instar larvae of Choristoneura   species and the mature maggot emerges from the host pupa and pupariates in the soil ( Dowden et al. 1948; Coppel & Maw 1954 a; Carolin & Coulter 1959). In a study of C. occidentalis   parasitism in British Columbia by Harris and Dawson (1979), emergence from sixth instar hosts as well as from host pupae was reported. Adult flies emerge from their puparia in about 9–11 days ( Coppel & Maw 1954 a).

Adults of the second generation of C. auricaudata   overwinter in alternate hosts including pupae of the fall webworm, Hyphantria cunea (Drury) ( Coppel 1947)   . The few other known hosts of C. auricaudata   include two tortricids, a species each of Geometridae   and Noctuidae   , and three species of Pieridae   and Pyralidae   that served as hosts under laboratory conditions ( Arnaud 1978, including records from “ C. aurifrons   ”).

The rate of parasitism of C. auricaudata   in conifer­feeding Choristoneura   is negligible in the East but significant in the West, with parasitism of up to 13 % reported by Wilkes et al. (1949) and up to 16 % reported by Harris & Dawson (1979) in British Columbia, and up to 13 % reported by Schaupp et al. (1991) in Oregon. Wilkes et al. (1949) ranked C. auricaudata   as the fourth most important parasitoid, and second most important dipterous parasitoid, of C. occidentalis   (as C. fumiferana   ) in British Columbia.

Efforts were made during the 1940 s and 1950 s to establish several western species of budworm parasitoids in eastern Canada to help control outbreaks of Choristoneura fumiferana   . Among these was C. auricaudata   , which was reared in huge numbers in Belleville, Ontario, from budworms collected mostly from the Lillooet area of British Columbia ( Wilkes 1946; Coppel 1947). About 21,000 C. auricaudata   were released in eastern Canada between 1944 and 1953, with an additional 2363 specimens released in Maine and 6317 specimens released in New York during this period ( McGugan & Coppel 1962; Clausen 1978). There is no evidence that any western C. auricaudata   became established in the East. Blais (1960) recorded a single C. auricaudata   from Québec, but that specimen could well have represented parasitism from the endemic population of the species. The only other published report of C. auricaudata   parasitizing Choristoneura fumiferana   in the East is that of Huber et al. (1996, as C. aurifrons   ) based on a rearing record from New Brunswick. 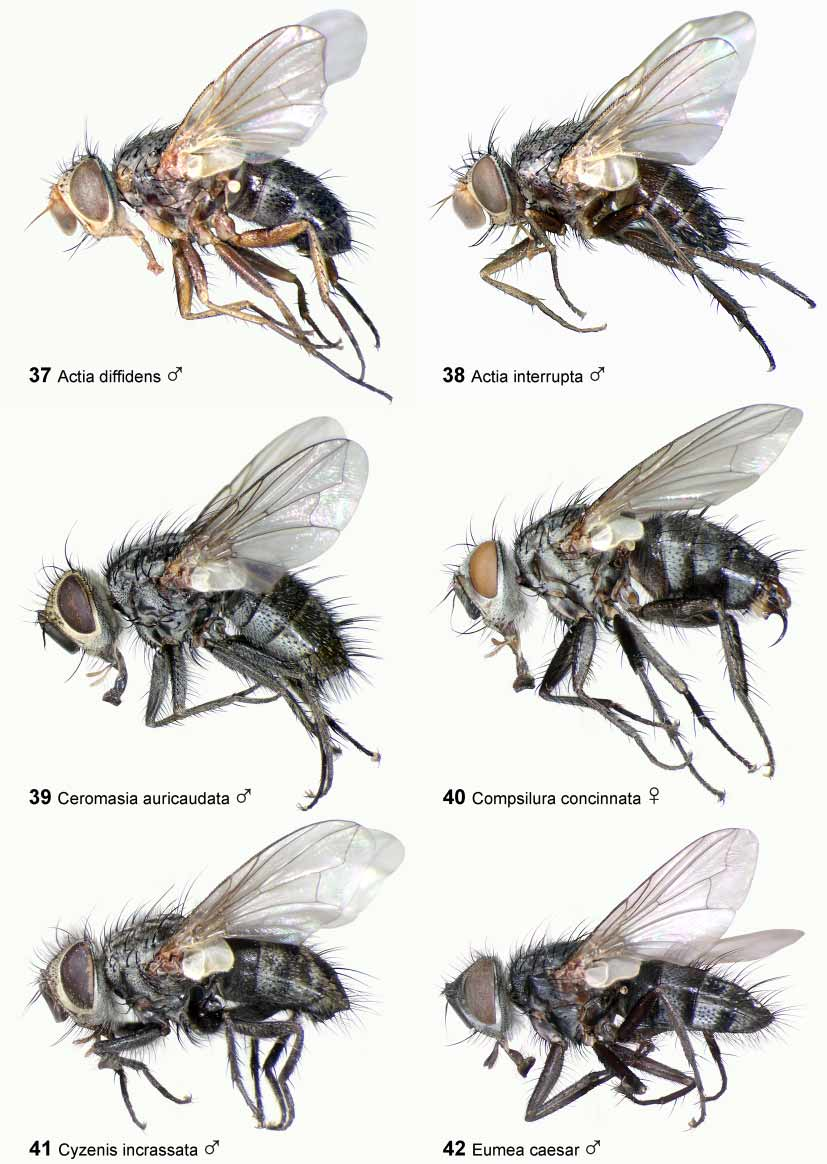