Lypha fumipennis   is a dark coloured tachinid, 5 –7.5mm long, that occurs throughout southern Canada and the northern United States and is also recorded from Georgia ( O’Hara 2002). It was redescribed by O’Hara (2002) in his revision of the Polideini of America north of Mexico. Lypha fumipennis   (as L. setifacies   ) was included in a key to the puparia of dipterous parasitoids of Choristoneura   species by Ross (1952) and in a key to the adults of dipterous parasitoids of C. occidentalis   (as C. fumiferana   ) in British Columbia by Coppel (1960). Tilles and Woodley (1984) included L. fumipennis   (as L. setifacies   ) among the five tachinid species treated in their manual of spruce budworm parasitoids in Maine.

Almost all the North American species of Lypha   were combined under the name L. dubia (Fallén)   , a Palearctic species, until Brooks (1945) revised the Canadian species of the genus. Brooks did not examine the type series of L. setifacies   (West), however, and O’Hara (2002) showed that Brooks misapplied this name. O’Hara (2002) discovered that the species described by Brooks as L. intermedia   is in fact L. setifacies   , and that the L. setifacies   of Brooks is conspecific with the species Brooks (1945) described from British Columbia as L. fumipennis   . Hence, the valid name for this Choristoneura   parasitoid is L. fumipennis   . Unfortunately, the name used by Brooks (i.e., L. setifacies   ) became entrenched in the literature on Choristoneura   parasitoids because this species has long been known as a parasitoid of the spruce budworm.

Host attack by L. fumipennis   has not been described but is probably similar to that of its Palearctic relative, Lypha dubia (Fallén)   . Lypha dubia   deposits fully incubated eggs in the vicinity of a host, the eggs hatch soon afterwards, and the first instars search for and parasitize the host ( Schröder 1969). Lypha fumipennis   parasitizes fifth and sixth instar larvae of Choristoneura   and the fully mature maggot emerges from the sixth instar of its host, or more rarely from the pupa ( Benjamin & Drooz 1954; Carolin & Coulter 1959; Allen et al. 1969; Hébert et al. 1989). The maggot enters the ground, overwinters in the puparium, and emerges as an adult in spring ( Brooks 1945; Coppel 1947). Adults are only seen during spring and early summer ( O’Hara 2002), so there is probably only one generation per year. Females of L. dubia   in Europe live for 30–50 days, have a preoviposition period of approximately a month, and develop about 150 eggs ( Schröder 1969). 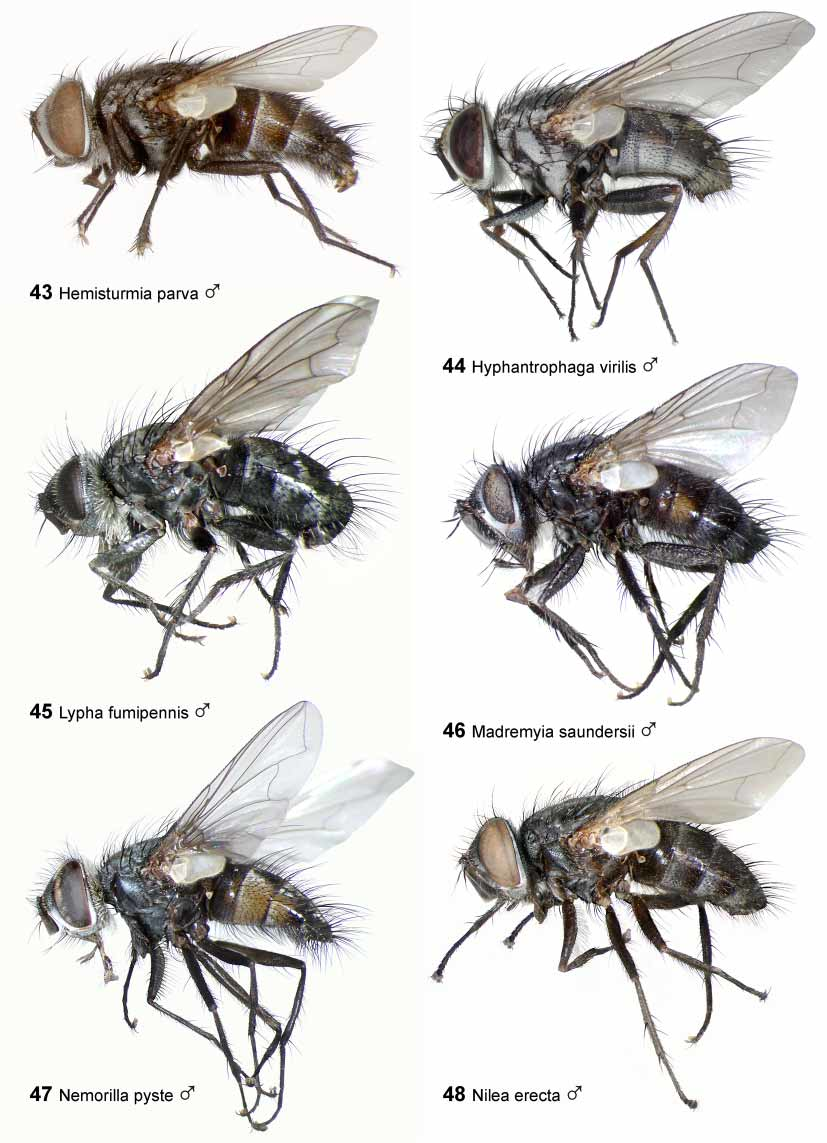