Diagnosis. Oxynoemacheilus arsaniasus is distinguished from O. ercisianus by having a central pore in the supratemporal canal (vs. absent), a bold, dark-brown bar or vertically elongated blotch at the caudal fin-base, usually M-shaped or fused with a roundish or vertically elongate, dark-brown blotch at the vertical midline (vs. a mottled pigmentation not different from the flank pattern), usually wide, dark-brown, bold bands on the caudal fin (vs. narrow, pale-brown, indistinct), no or a shallow dorsal and ventral adipose crest in individuals larger than 50 mm SL (vs. a short and high crest), a longer and more slender caudal peduncle (caudal peduncle length 1.3–1.6 times its depth vs. 1.0–1.3), a larger eye (eye diameter 19–30% HL vs. 14–19), and a short prepelvic length (48–53% SL vs. 52–57).

It is distinguished from O. kaynaki by having an incomplete lateral line (vs. complete), no scales on the flank (vs. present), no pelvic axillary lobe (vs. present), and no or a short dorsal adipose crest on the caudal peduncle (vs. a long adipose ridge).

Oxynoemacheilus arsaniasus is distinguished from O. tigris by having no scales on the flank (vs. present, usually isolated and deeply embedded), a bold, dark-brown bar or a vertically elongated blotch on the caudal-fin-base or a bar fused with a roundish or vertically elongate, dark-brown blotch at the vertical midline (vs. two bold, black spots in most individuals, no pigmentation in others), no or a short dorsal-adipose crest on the caudal peduncle not reaching to the vertical through the anal-fin base (vs. a long dorsal adipose crest reaching beyond the anal-fin origin, usually below the last dorsal-fin rays when folded down) and a more slender caudal-peduncle (caudal peduncle length 1.3–1.6 times its depth, vs. 0.9–1.2).

Dorsal fin with 8½ branched rays. Anal fin with 5½ branched rays. Caudal fin with 8+7 (n=7), 8+8 (3) branched rays. Pectoral fin with 10 (n=1) and 11 (n=5) and pelvic fin with 7 (n=5) and 8 (n=1) rays. No scales on flank and back. Lateral line incomplete, reaching to vertical through a point between about of one snout length in front of dorsal-fin origin and middle of caudal peduncle. Anterior nostril opening at end of a low, pointed and flap-like tube. Posterior tip of anterior nostril reaching to posterior nostril when folded backwards. No suborbital groove or flap in male. Mouth small, arched. Lips thick with large furrows. A deep median interruption in lower lip. No or a shallow median incision in upper lip. Processus dentiformis narrow and rounded. No median notch in lower jaw. Barbels moderately long, inner rostral barbel not reaching to base of maxillary barbel; outer one reaching to vertical between posterior nare and anterior eye margin. Maxillary barbel reaching to vertical through middle of eye or slightly behind posterior margin of pupil.

Etymology. Oxynoemacheilus arsaniasus is named for the Arsanias, the antique name of the Murat River. An adjective based on the classical Latin adjective.

Remarks. Our molecular data ( Fig. 1 View FIGURE 1 ) place O. arsaniasus in the O. tigris species group. Based on DNA barcoding it is well separated from all other species in the O. tigris group, and by a minimum K2P distance of 3.0% to O. kaynaki . It is also supported by the PTP approach (the two individuals are separated) and by the mPTP delimitation as a separate entity. 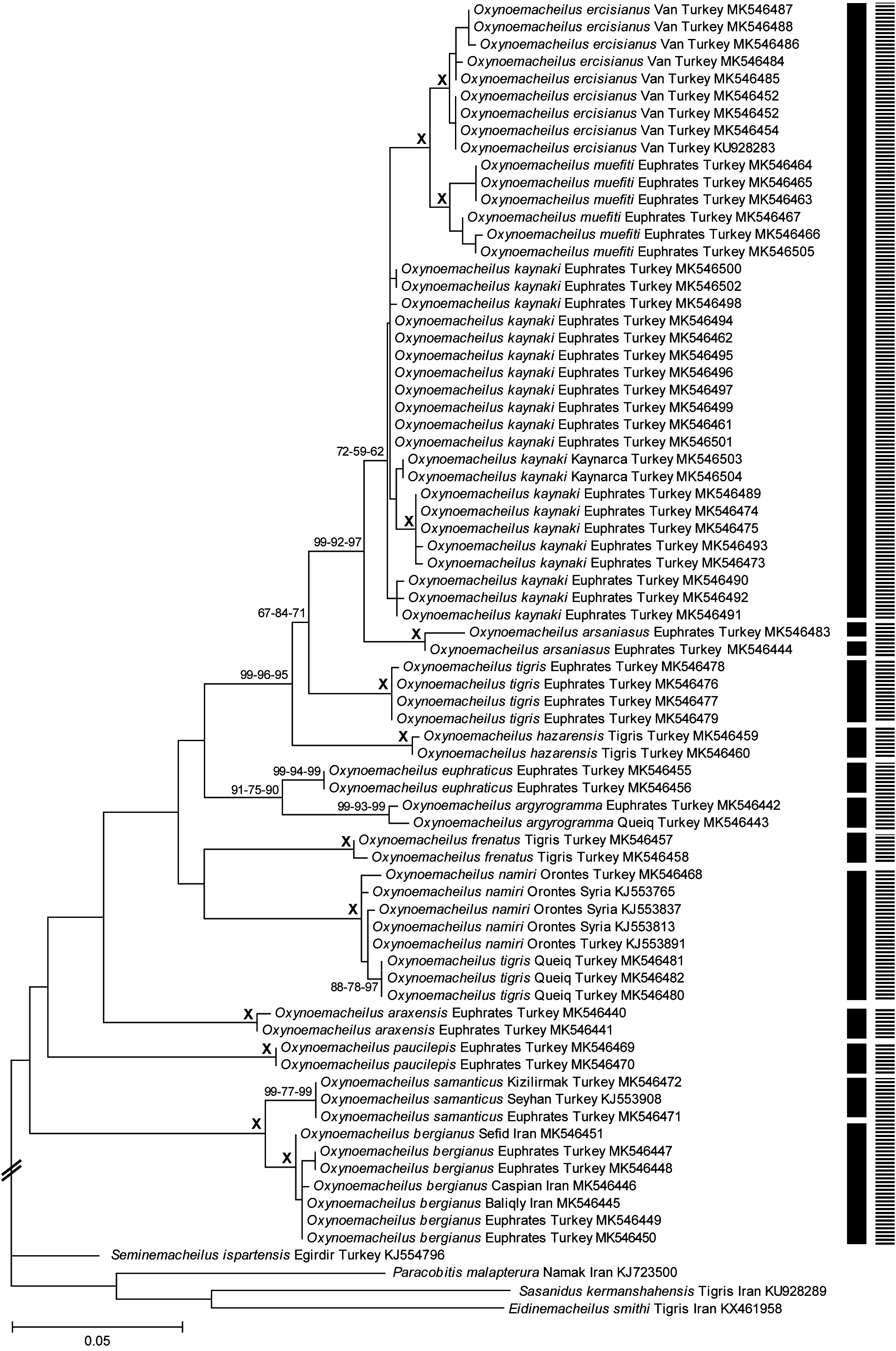 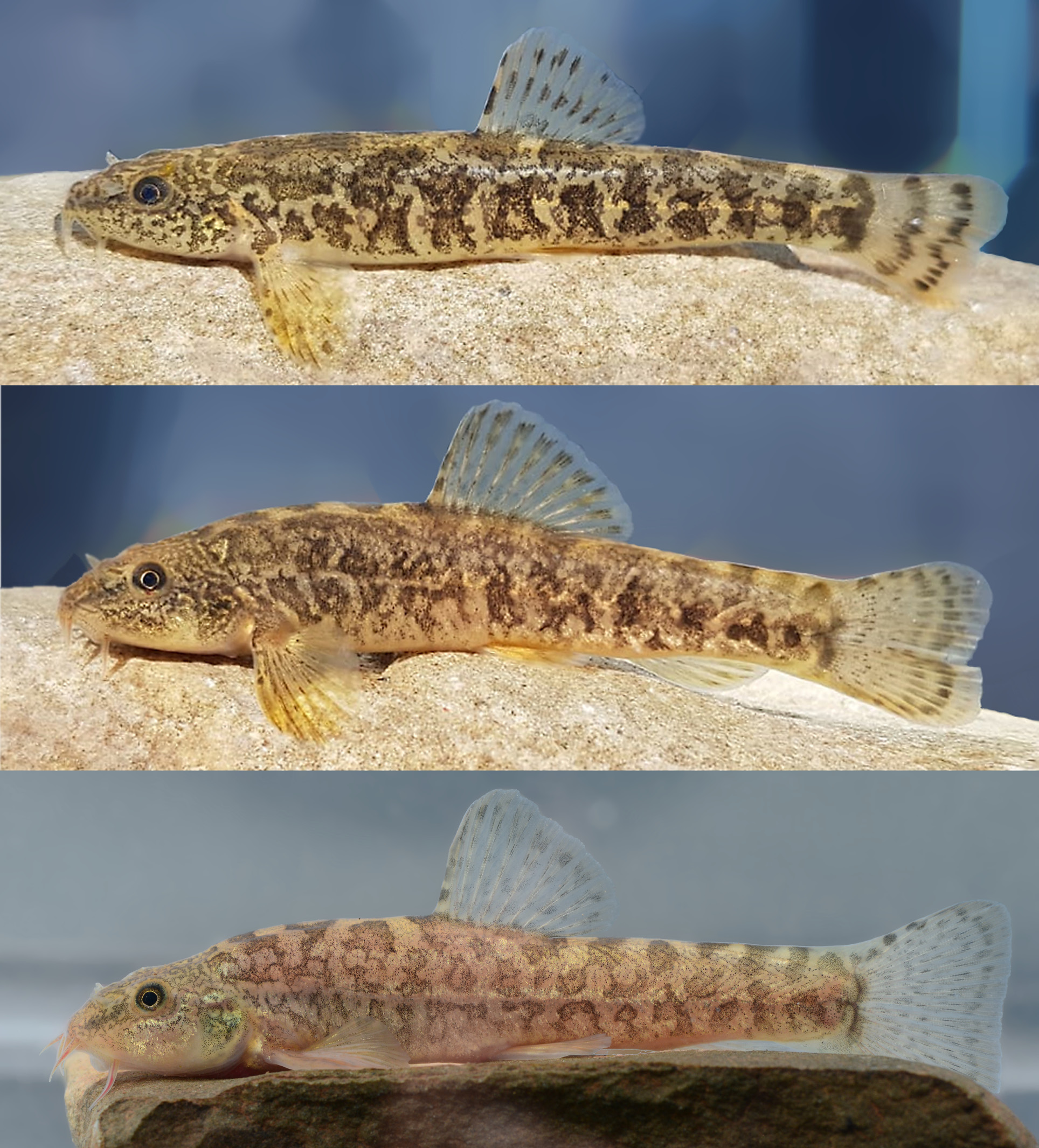