Mean SVL in males 36 mm, females 46 mm; cranial crests prominent in most specimens, with the supraorbital and postorbital crests forming an arched L-shaped structure about each eye; preorbital and pretympanic crests present, indistinct; canthal crests present, prominent, extending to above the nostrils; parietal crests prominent, oriented sharply posteromedially, extending to near midline of body; supratympanic crest absent; suborbital crest present but indistinct in some individuals; tympanum is not externally visible; tibia lengths in males range from 43-51% of SVL in males, 40-42% SVL in females; foot length ranges from 43-55% SVL in males, 41-44% in females. Webbing on the foot extends to the tip of every toe, except Toe III, which is webbed only to the second subarticular tubercle. Outer metatarsal tubercle small, rounded, elevated and non-keratinized; inner metatarsal tubercle larger, ovoid, and also non-keratinized. Tips of digits possess small, rounded tips. Morphometric variation is summarized in Table 1 View Table 1 , and adult specimens are illustrated in Fig. 1 View Figure 1 .

In preservative, dorsal coloration is dull brown with dark brown lateral stripes following the lateral tubercles; some cream spots present on legs in some specimens. Ventrum is dark cream with a diffuse dark brown marbled pattern that extends onto the legs. In general, males tend to be more uniform dull brown than are the moderately patterned females.

No other bufonid in Mexico or Guatemala has webbing on the feet as extensively developed as in I. tacanensis (Fig. 2 View Figure 2 ). Within the range of this species, only Incilius bocourti (Brocchi, 1877) also lacks an externally evident tympanum. Incilius bocourti differs from I. tacanensis by lacking vocal slits (vs. present, unilateral), having little webbing on the feet (vs. extensive), reaching sizes up to 70 mm in males and 80 mm in females (vs. 37 mm, 57 mm), by having very large, distinctly oval parotoid glands with length more than 2 × diameter or eyelid (vs. rounded, about 1.25 × eyelid). Incilius bocourti is strongly sexually dimorphic in coloration, with males being nearly uniform greenish yellow and females being dark reddish brown. Based on museum specimens, I. tacanensis appears to be generally uniformly dull brown. The heads of the two species are illustrated in Fig. 3 View Figure 3 .

Incilius tacanensis has a small geographic distribution apparently restricted to moderately high elevations (ca 1500-1700 m) between the Cerro Mozotal, Chiapas, Mexico to the west to Volcán Zunil in Quetzaltenango, Guatemala to the east (Fig. 4 View Figure 4 ). Despite considerable collecting efforts over many decades in Departamento San Marcos, Guatemala (reviewed by Rovito et al. 2009), no records are available from this intervening region. This distribution represents but a small portion of the Fuegan Faunal Area defined by Campbell and Vannini (1989a), and evidently does not include the Sierra Madre de Chiapas, Montañas de Cuilco, nor the Central Plateau of Chiapas. However, details of the geographic distribution of this species must be considered conservatively, as it is evident that this small, cryptic species is not readily encountered even in areas where it is known to occur. Detailed habitat notes are not available for any of the museum specimens, but the species apparently occurs in leaf litter in rainforest and cloudforest habitats.

In fact, information is lacking on various aspects of its biology, including intra and interspecific ecological interactions. It is known that the collection of the holotype (March 1938) and two paratypes (January 1940 and April 1949) was carried out in the dry season, although five of the paratypes were collected in the rainy season (August 1924 and 1950; Smith 1952).

This region is heavily cultivated in coffee, but we have no evidence that the species occurs in any form of coffee fields, unlike some other anurans in the area that can become quite abundant in areas of coffee production [e.g., Craugastor rhodopis (Cope, 1867) ( Seib 1985)].

Oviductal eggs were present in females collected in July and August, suggesting that breeding occurs in the wet season. Clutch sizes were estimated (i.e., eggs were not removed and individually counted) between approximately 50-400 eggs. The eggs are small and pigmented.

Incilius tacanensis is superficially similar in size and sexual dimorphism to I. epioticus (Cope, 1875), I. chompipe ( Vaughan and Mendelson 2007), and I. guanacaste (Vaughan & Mendelson, 2007) in Costa Rica. Those species have large (ca 5 mm diameter), unpigmented eggs and are now known to undergo direct development ( Gray and Bland 2016). Unlike these diminutive (females about 35 mm SVL, males about 25 mm; Vaughan and Mendelson 2007) Costa Rican species, we presume that I. tacanensis has typical aquatic larvae. However, these larvae and all other aspects of reproduction in this species remain unknown. 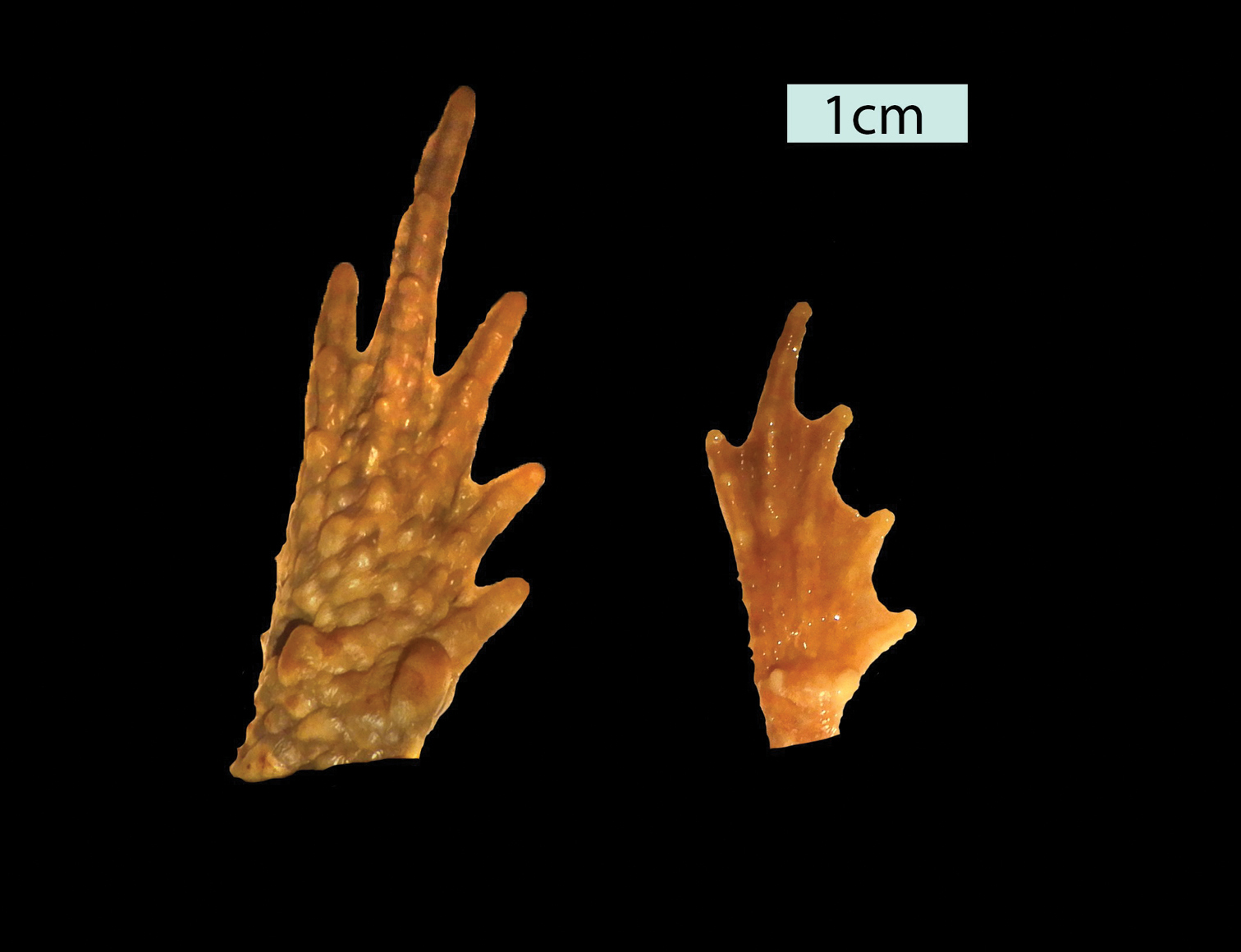 Figure 3. Details of the heads of adult females of Incilius tacanensis (left: MVZ 159445) and I. bocourti (right: UTA A- 13008), showing diagnostic differences in the cranial crests, parotoid glands, and general shape. Incilius bocourti is a much larger species than is I. tacanensis (see Fig. 1), so these images are not at the same scale in order to facilitate direct comparisons. 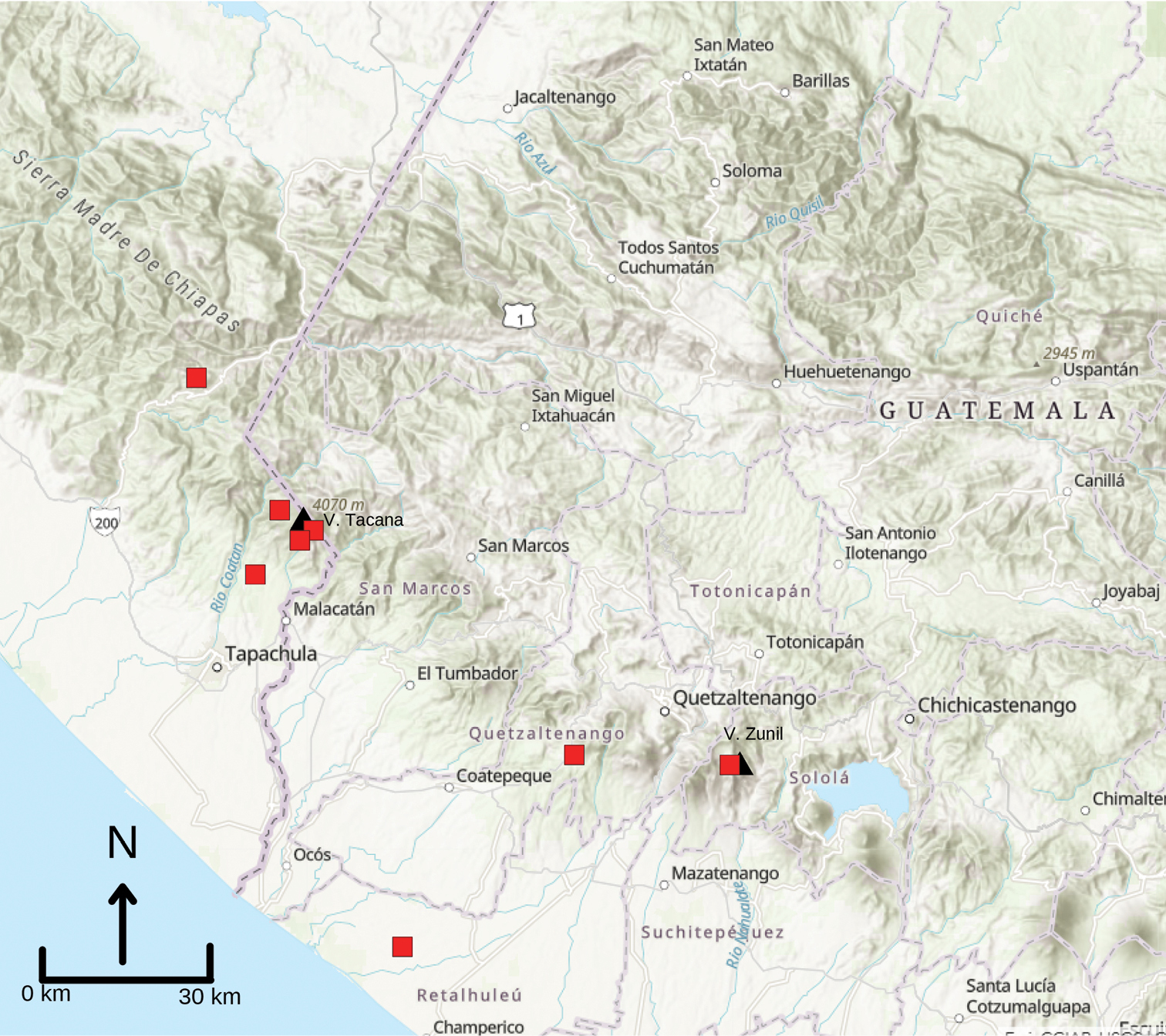 Figure 4. Map of the southern border regions of Guatemala and Chiapas, Mexico. Black triangles represent Volcan Tacana and Volcan Zunil. Red squares represent museum specimens examined in this study. Note that some squares represent more than a single specimen. The record on the coastal plain of Quetzaltenango, Guatemala, is UMMZ 102472 which bears the locality Granja Lorena; we suspect that this is generalized locality information and the toad likely was collected to the north at higher elevation.