Corm globose, c. 15 mm in diameter; tunics membranous or coriaceous, splitting longitudinally, with untoothed rings at base. Cataphylls 4–5, apices of the inner ones green and closely sheathing the aerial shoot. Leaves (3.0–)5.7(–8.0), synanthous, shorter than flowers at the start of anthesis then extending and becoming much longer, 1.5–2.5 mm wide, green, ciliate, 2 ribs in each of the grooves on lower surface, width of white stripe approximately 1/3 of leaf diameter. Flowers (1.0–)2.5(–4.0), wholly violet–blue ( RHS Colour Chart 91 A); throat yellow, sparsely pubescent. Prophyll absent. Bract and bracteole subequal, white and greenish at the apex, with age brownish. Perianth tube 5–8 cm long, violet near the apex, further down whitish; segments between 21 and 31 mm but usually 25 mm long and between 6 and 11 mm usually 8 mm wide, elliptic, obtuse or subacute. Filaments 7.0–10.0 mm on average 8.5 mm long, yellow, stained blackish at the base, scabrid–pubescent in the lower half; anthers 7.3–10.8 mm on average 9.4 mm long, yellow. Styles orange, divided into 3 branches that are expanded towards the tip; branches 4.2–5.7 mm on average 5.1 mm long, scabrid to papillose; the styles are usually shorter than the stamens. Capsule oblong, 10.0– 12.5 mm long, 5.0–6.0 mm wide; seeds brown, subglobose, 1.5–1.7 mm diameter, with a pointed caruncle and indistinct raphe.

This subspecies is currently known only from the type locality and the estimated area of occupancy is less than 10 km 2. Its population and habitat are endangered by human pressure (recreational activities) and overgrazing. Therefore, it is suggested that this new subspecies should be placed in World Conservation Union ( IUCN) threat category “Critically Endangered” ( CR), [ B1 ab(i, ii, iii, v) + 2ab(i, ii, iii, v)], ( IUCN, 2001)  .

Phenology: —In the wild, flowering from March–April; fruiting May–June.

Taxonomic relationships: — The blue-flowered variant of C. pestalozzae  was already known by Mathew (1982), but little was known about its distribution and if the blue forms occur occasionally in “normal” populations or are allopatric. All wild plants seen by us around İstanbul are white-flowered; at most, in some populations a violet-blue coloration has rarely been seen on the apices of the segments. Hence , no wholly violet-blue individuals have been observed in these populations either by us or Mathew (1982). All specimens identified here as the new subspecies have violet-blue flowers and were found in the Armutlu Peninsula. The presence or absence of rib(s) in each of the grooves on the lower surface of the leaves has some value in distinguishing between Crocus  taxa ( Mathew, 1982). In cross sections of leaves of C. pestalozzae subsp. violaceus  , two ribs in each of the grooves on the lower surface of the leaves were observed. Kandemir (2009, 2011) investigated leaf anatomy of C. pestalozzae  , but she did not note a rib(s) on the lower surface of the leaves. Indeed , this feature is not detectable in the figures published by this author ( Kandemir 2009, Fig. 4a; 2011, Fig. 1lView FIGURE 1). On the other hand, distinct ribs were observed by us in cross sections of the leaf samples of C. pestalozzae  that were collected around İstanbul. The type specimen of C. pestalozzae  was collected by Pestalozza from the district of Bolu but without precise details. This species has not been re-collected from the type locality. Crocus pestalozzae subsp. pestalozzae  is now known only from Kırklareli, İstanbul and Kocaeli Provinces ( Fig. 2View FIGURE 2)  . 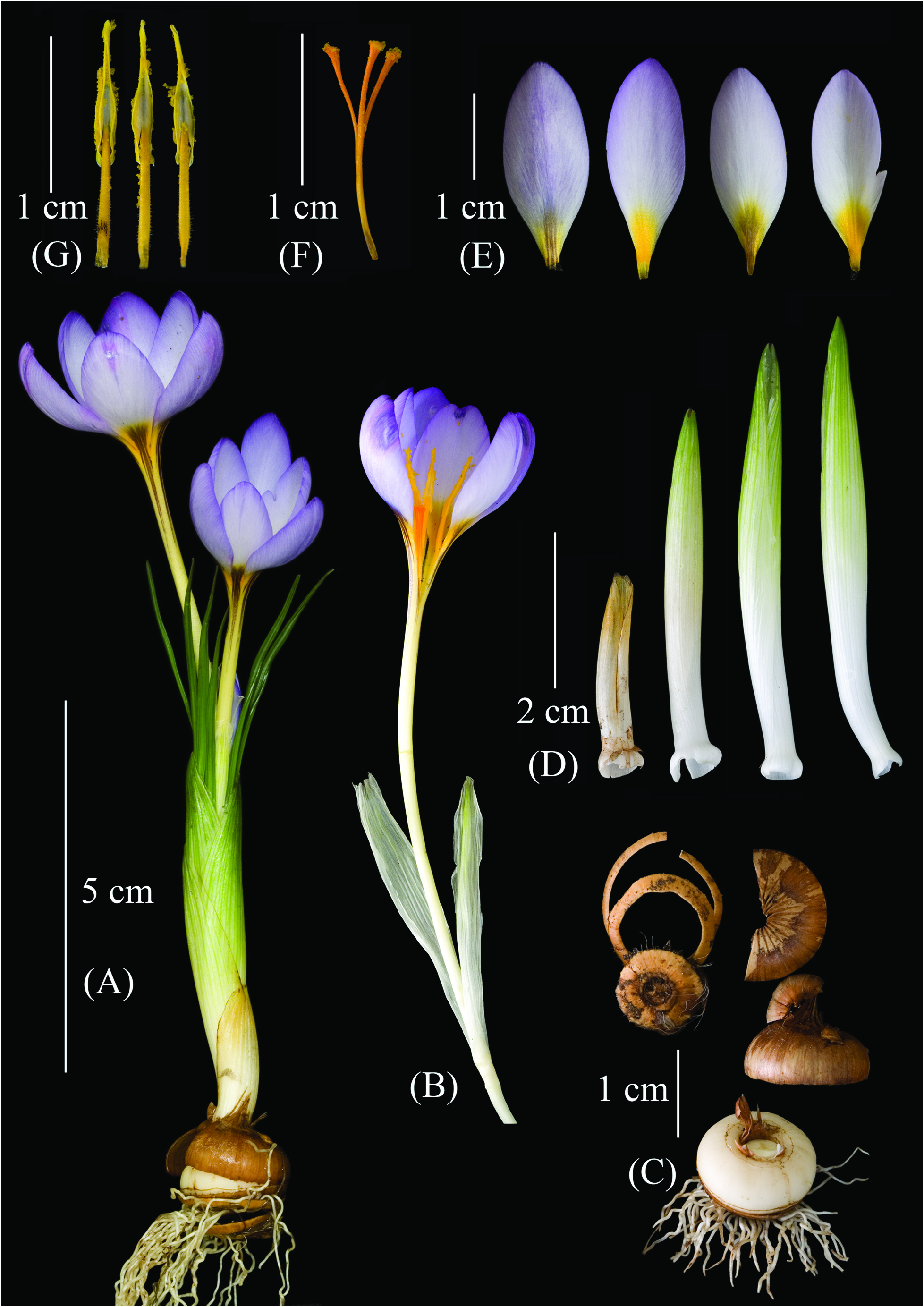