Type material examined: Germany, “Hercynia”, leg. Zimmermann, 2 ♀? syntypes of Glomeris marmorata Brandt, 1833   (ZMUB 39). No lectotype designation has been made here, particularly as we did not directly examine the material   .

Brief redescription: Length up to 13.5 mm, width up to 6.25 mm. Coloration mostly vivid, very distinctly marbled, pattern as in Figs 10-13. Syncoxite of telopods as in Figs 14A, B View Figure 14 , with only minor variations in shape of central lobe and in delicately bifid coxal horns.

Remarks: The presumed type series of G. marmorata   , even though represented by two dry, pinned specimens, has still preserved its colour pattern sufficiently well ( Fig. 11 View Figure 11 ) to compare it with the beautiful illustrations by Koch (1863) and hence to unequivocally synonymize this species here with G. klugii   , the holotype of which has been revised elsewhere ( Golovatch 2003). This formalizes Brolemann’s (1921) informal synonymy “ G. conspersa C. Koch, 1847   (= marmorata   )” proposed in his checklist.

The syntype of G. fuscomarmorata   examined here has faded completely, apparently due to the long preservation in alcohol. Fortunately, most of the other samples from North Africa, especially fresh ones, have retained their coloration (Figs 10, 12), which matches quite closely the pattern depicted by Lucas (1849), based on a then recently collected syntype (Fig. 13). We are certain, however, that this species must also have been printed somewhat too dark and red compared to its natural coloration in Lucas’ (1849) Plate 1, likely because Lucas used dry material (cf Figs 11 View Figure 11 and 13). On the other hand, G. klugii   in Europe is known to exist in two colour morphs, the dark “ undulata   ” and the light “ conspersa   ” ( Hoess 2000), of which “ conspersa   ” is much more widespread

and occupies peripheral parts of the species’ distribution area, including North Africa. Could material of “ undulata   ” have served, at least in part, for Lucas’ (1846, 1849) descriptions and illustrations? Hoess (2000) marked as questionable populations of “ conspersa   ” from a few small, outlying areas in the Balkans, near Algiers and Tunis, but we can confirm the presence of G. klugii   in North Africa. We suggest that it could well have arrived there, particularly at the largest sea ports, through commercial activities, which have been going on since prehistoric times throughout the Mediterranean. The synonymy of G. klugii   and G. fuscomarmorata   proposed here therefore appears fully justified.

Furthermore, we must give due tribute to Brandt (1840b, 1841a, b) who, already at the very beginning of diplopodological explorations in North Africa, wrote that his G. marmorata   from Germany and Algeria were identical. Although he failed to recognize that his own G. klugii   and G. marmorata   actually represented the same speciesapparently because the holotype of G. klugii   (surprisingly) did not show any striae on the thoracic shield, retained (in alcohol) its generally light coloration and was thought to have come from Egypt or Syria—he was essentially correct in thinking that the same species could exist on both continents. Likewise correct have been the very few subsequent records of “ conspersa   ” in Algeria and Tunisia ( Attems 1908; Abrous-Kherbouche and Mauriès 1996), whereas most other authors believed that the North African fauna, including that of Glomeris   , is fully endemic.

The syntype of G. maculosa   is a “ conspersa   ” specimen of G. klugii   , with the colour pattern still well traceable. Hence the synonymy of these names is also proposed here.

The fact that G. klugii   belongs to the “ Eurypleuromeris   ” type provides an additional indication of its probable introduction to North Africa from Europe. Moreover, even though G. conspersa   is the type-species of Eurypleuromeris, Verhoeff (1921)   mistakenly attributed his G. maculosa   to the “ Stenopleuromeris   ” type. Indeed, the anterior part of tergum 3 in the syntype of G. maculosa   that we have examined is probably a little narrower than is usual for European or other North African “ conspersa   ” specimens of G. klugii   , but this variation seems too modest to be considered a reliable distinction, perhaps even reflecting individual rather than geographical variation. This is another good reason to abandon the subgeneric division of Glomeris   . 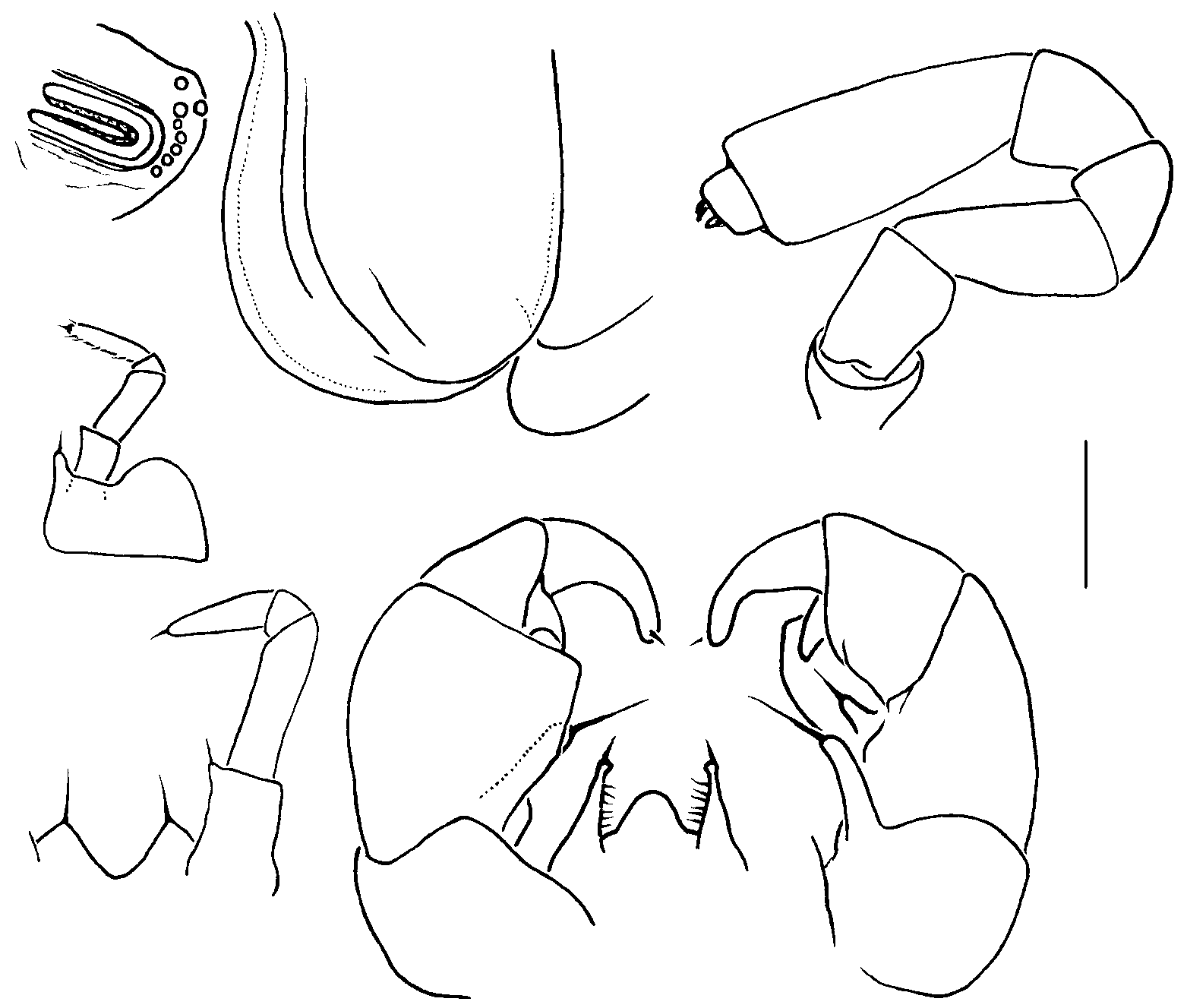 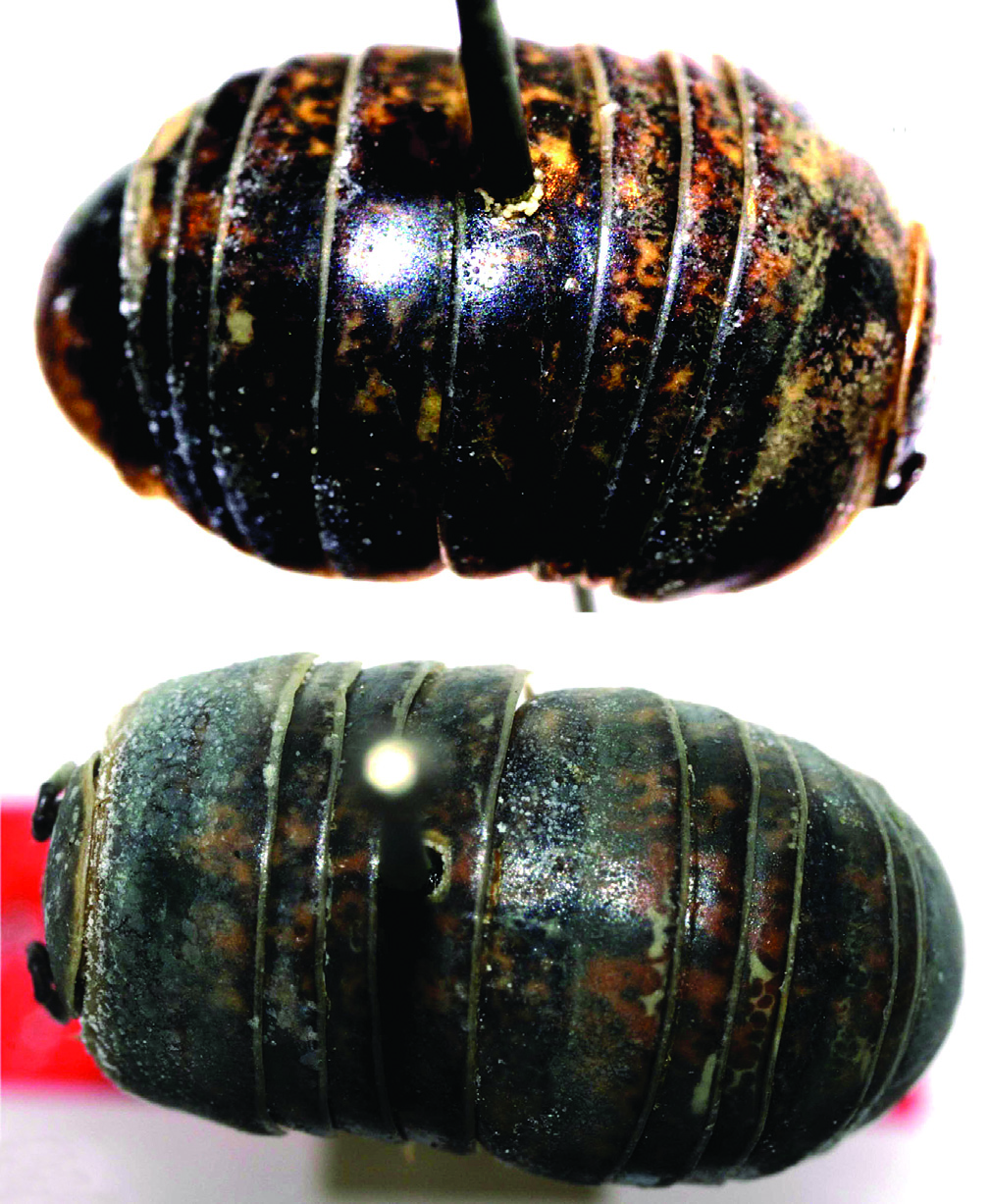 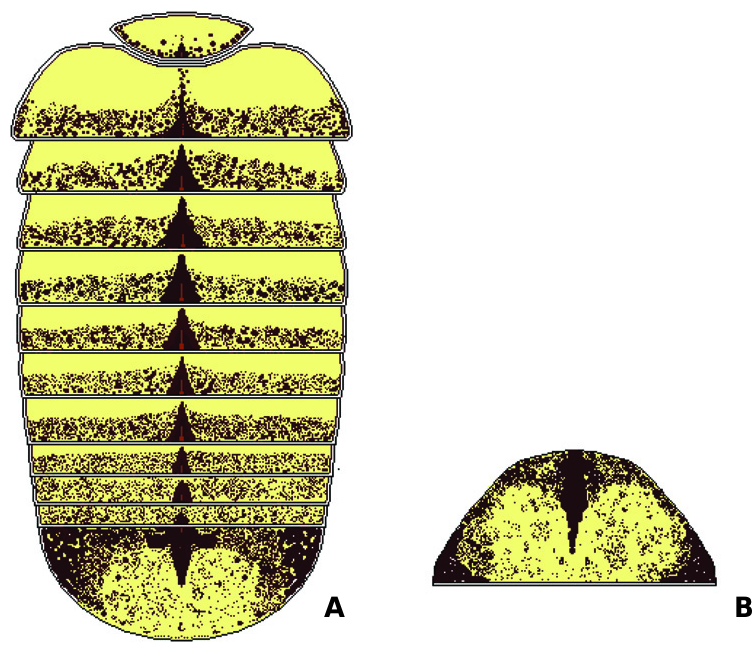